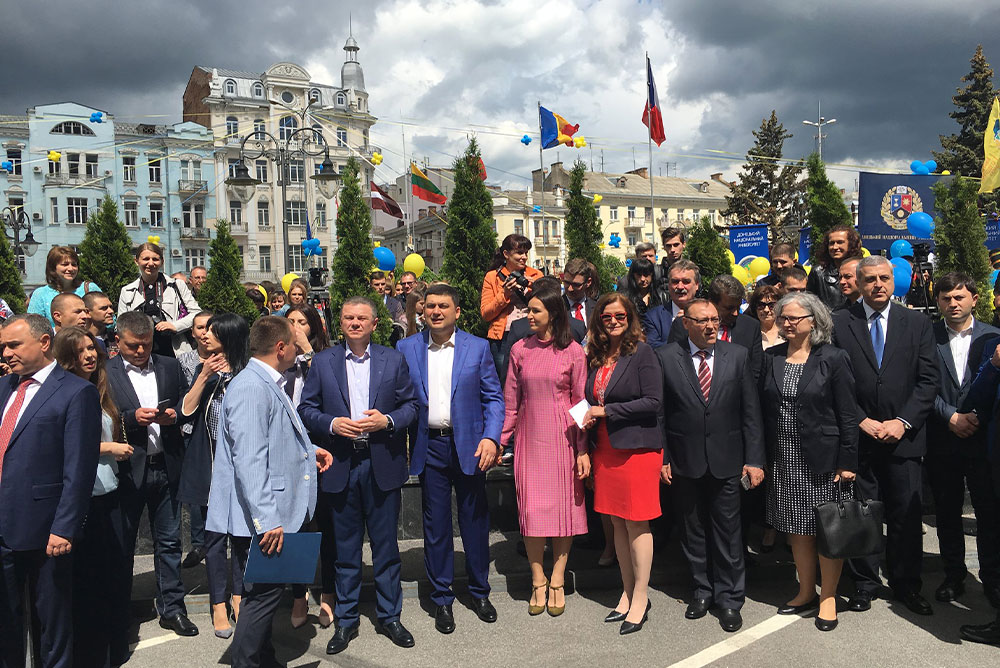 Then-Ukrainian Prime Minister Volodymyr Groysman and Mayor of Vinnytsia Serhiy Morhunov praise the efforts made by the City of Vinnytsia in order to improve living conditions of citizens, to fight corruption and promote higher education of young people in 2016. Courtesy of the Congress of Local and Regional Authorities/Flickr CC BY-ND 2.0.

As I write this, Russian troops reportedly are moving north through the Odesa oblast, or region, toward the river Kodyma, along which sits a town called Balta.

This is not new territory for Balta, which like much of Ukraine has been contested over centuries of wars. But in recent years, Balta has actually broken a lot of new ground, at least when it comes to the practice of citizen-centered democracy. In 2016, Balta adopted participatory budgeting, an innovative process—originated in Brazil—in which citizens rather than officials determine their local budget. Balta also gave its young people their own governing council and a decision-making process to influence local policies.

Democracy, in its essence, is everyday people governing themselves. Such self-government happens most often at the local level, which is why countries tend to get more democratic when they decentralize.

Since the 2014 Maidan revolution, Ukraine has been among the more rapidly decentralizing, and democratizing, countries on Earth.

This context is crucial to understanding what is now at stake in Eastern Europe. The war is being described as a conflict between Russia and Ukraine, between Russia and the West, or between Vladimir Putin and Volodymyr Zelensky. But it’s really a clash between two of the most powerful trends in worldwide governance: increasing authoritarianism in nation-states and increasing democracy in our local communities.

In other words, Ukraine is now a battlefield where the international democratic recession meets the local democratic expansion.

Balta’s advances in local democracy are representative of this shift toward greater local power and responsibility in 21st-century Ukraine. A generation ago, Ukraine was a post-Soviet state, with a centralized government conducting top-down rule of 24 oblasts, and nearly 500 rayons (territorial units of about 50,000 people). Localities—including larger cities and nearly 12,000 hromadas, orlocal communities—could hold elections, but their officials had little influence over local affairs.

In this century, and especially in the last eight years, Ukraine has devolved power to those local communities, more than 90 percent of which have fewer than 3,000 people. For many smaller hromadas, Ukraine authorized amalgamation—mergers of small communities into larger municipal units, called “amalgamated territorial communities,” which would have enough heft to provide services and lead economic development.

To incentivize these mergers—towns made rich by gas or property taxes sometimes were resistant—amalgamated communities were given a greater share of both national and local budgets, new power to impose local taxes, and greater responsibility for education, health care, transportation, social programs, and agricultural land. To improve governance, these communities were authorized to experiment with democratic tools like participatory budgeting; in the past year, Ukraine has also advanced legislation permitting more popular referenda.

In a politically divided Ukraine, this devolution of local power had support across the spectrum, for a couple reasons.

The first was positive, and driven by economics. Putting more money and power in localities was seen as the best bet for addressing poverty and inequality, and developing Ukraine in a balanced way that would make it a better fit with the rest of Europe, which has strong local governments.

Since the 2014 Maidan revolution, Ukraine has been among the more rapidly decentralizing, and democratizing, countries on Earth.

The second reason, however, was defensive: the threat of separatism. In a country the size of Texas, greater local control was seen as the best way to placate localities and regions that might think of leaving—especially Donetsk and Luhansk, two Russian-speaking Ukrainian oblasts where Russia would make incursions (and which Putin would declare “independent” as a pretext for his new invasion).

“The path of decentralization was an asymmetrical response to the aggressor,” said Andriy Parubiy, a former speaker of Ukraine’s parliament, in 2017. “The process of the formation of capable communities was a kind of sewing of the Ukrainian space.”

Many of these newly empowered Ukrainian local governments have seized the opportunity, and not just for economic development. Municipalities have embraced political reforms—adopting ethics codes, making their records and decision-making transparent, establishing citizen-directed processes like participatory budgeting, and adding new guarantees for representation and participation of women, men, and underrepresented groups in local politics.

Just this past December, two Ukrainian cities, Khmelnytskyi and Vinnytsia, finished first and third, respectively, in a global contest for innovation in government transparency. Mariupol, a city in the southeast reportedly under siege by the Russian military, has won international praise for its model of sharing governance power with local organizations.

These newly empowered cities have also been eager to collaborate with one another, especially in infrastructure, waste management, and extending internet services. Planning is increasingly long-term. Kamianske, a locality of 240,800 in the oblast Dnipropetrovsk, is using a democratic, citizen-led process to compose a municipal development strategy for 2027.

The commitment to building includes infrastructure for democracy itself. In the Poltava oblast, where localities are especially collaborative, the larger city of Kremenchuk was preparing to launch a school for participatory budgeting while a smaller town, Pyriatyn, established a city council ethics code and a “Dialogue Club” that allows students to debate proposed decisions and participate in planning. In Luhansk, Sievierodonetsk, population 112,950, has prioritized initiatives to make it easier for internally displaced persons to participate in local decision-making.

Of course, not all the results of decentralization are praise-worthy. A 2018 assessment of three cities, sponsored by the intergovernmental democracy support organization International IDEA, identified problems such as greater local partisanship and political fighting under the new system, and a lack of clarity about which local officials and institutions are in control. In larger cities, notably Odesa and Kharkiv, critics see decentralization as having enabled corruption by powerful business interests and patronage-dispensing political machines.

Ukraine also faces an underappreciated but enormous global problem for democratic governance: too few people have the skill and expertise to do the complicated work of running a local democratic government. As a result, too many local democracies struggle, or even fail, because they don’t have people who can organize consultations, manage a budget and contracts, prevent corruption, or lead a strategic planning process.

Putin’s determination to conquer Ukraine means these problems won’t be solved any time soon. Even if his invasion is repelled, the war could tear at all this newly sewn democratic fabric in Ukrainian communities. And the fighting may reinforce media and political narratives that Ukraine is a country dangerously divided between its Ukrainian-speaking, Europe-oriented west and the Russian-speaking, old-fashioned east.

But the true Ukraine picture is more complicated than that. And, despite all the human costs of this conflict, it’s quite possible that the recent rise of local democracy may allow community collaborations to continue, even through difficult times. Perhaps the war, for all its dangers to life and liberty, might even open up new possibilities for more democracy and development.

That’s not a blind hope. It’s history. The horrors of nation-state autocracies have long inspired the desire for local self-government, just as the weakness of democratic systems offers openings for dictators. Big authoritarianism and little democracy go together, like darkness and light—a reality famously recognized by the Ukraine-born Russian writer Mikhail Bulgakov in his classic Stalin-era novel, The Master and Margarita.

The plot is driven by a visit from the devil to the Soviet Union. “What would your good do if evil didn’t exist,” Satan asks an evangelist-writer, who is full of despair, “and what would the earth look like if all the shadows disappeared?”

Democracy You Can Watch

The historic convention to draft a new Chilean constitution is meeting again as the South American summer ends. Watching people write can be boring, but your columnist, a Spanish speaker, is enjoying the proceedings live on the broadcast site https://convencion.tv.

“True democracy cannot be worked by twenty men sitting at the centre. It has to be worked from below by the people of every village.” —Mahatma K. Gandhi, 1948

This is the debut of Democracy Local, a new global column.