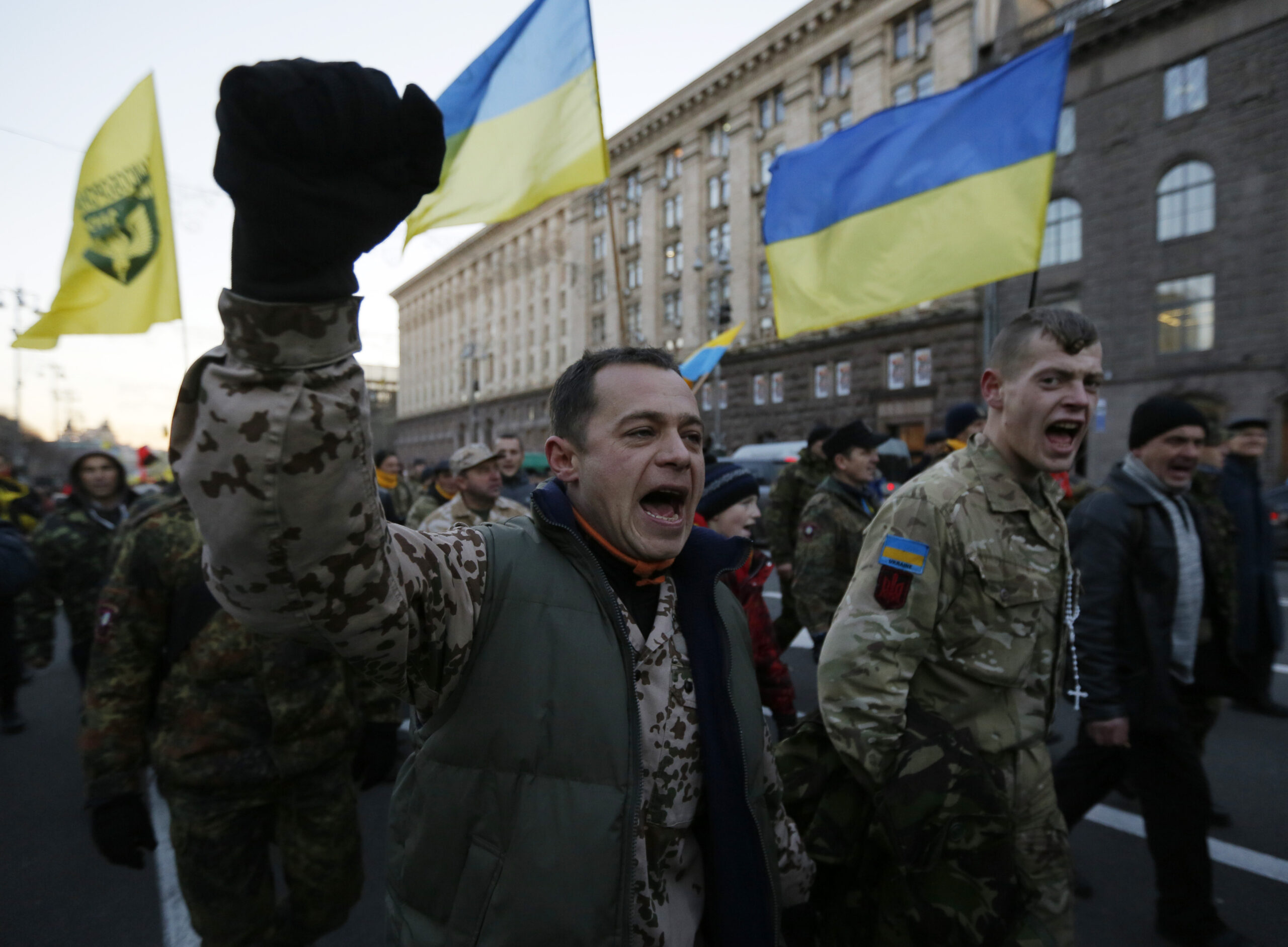 Activists shout slogans during a rally in Kyiv, Ukraine, in 2014 to mark the first anniversary of demonstrations known as Euromaidan, which where were sparked by then President Viktor Yanukovych's decision in November 2013 to freeze ties with the West and tilt toward Moscow. The protests drew hundreds of thousands, leading to a bloody crackdown by security forces in late February 2014 and the eventual ouster of Yanukovych as he fled to neighboring Russia. (AP Photo/Sergei Chuzavkov)

Ukrainians refer to Russian TV and its viewers as “Zombieland,” having long ago developed an immunity to the main talking points of Vladimir Putin’s mindless propaganda war.  They know the absurdity of his claims that Kyiv is run by Nazis and drug addicts, that NATO is threatening to destroy Russia, and that Ukraine’s Russian speakers are victims of a genocide.

Putin has supported these talking points by laying out his own version of Ukrainian history. In his telling, Ukraine has only been independent since 1991 and over the last 30 years has denied its true destiny: unity with Russia in a close but subordinate relationship. However, four revolutionary upsurges over the last hundred years in Ukraine refute this narrative: the war of independence in the years 1917–21, the struggle against Stalin’s regime in the 1920s and 1930s, the guerrilla war of the 1940s, and the Euromaidan protests of 2013–14. Ukraine’s current resistance to the Russian invasion draws on these revolutionary cycles and highlights a long, multigenerational drive for national self-determination in the face of claims by Russian supremacists.

Because of its rich “black earth,” one of the world’s oldest agricultural civilizations, the Trypillian, developed in Ukraine around 5,000 to 3,000 B.C. In the 10th to 13th centuries Kyiv was the center of a powerful state whose ruling family intermarried with European royalty, and in the 17th to 18th centuries it oversaw the flowering of unique baroque culture. In more recent times, the country’s struggle for statehood began near the end of World War I, with the establishment of the Ukrainian People’s Republic. Initially carved from the Russian empire in 1917, the republic joined forces with the eastern half of Galicia in 1919, which had been part of the Austro-Hungarian empire. The republic was short-lived, however. Bolshevik armies invaded from Russia three times, and the country remained a hotbed of resistance until 1921, while armies and partisans contested Moscow-imposed rule.

Armed resistance to this rule in Ukraine only died down at the end of 1922 with the declaration of a Soviet Ukrainian republic, which promised political and cultural autonomy. At that point, some Ukrainian activists committed to the new state- and nation-building process. In 1923, when a policy of Ukrainization was announced, education, media, and government institutions moved toward using Ukrainian as their official language. By 1925, the policy had gained traction and launched a “cultural renaissance” in literature and the arts. It produced a plethora of brilliant Ukrainian writers, such as Mykola Khvylovy and Pavlo Tychyna, and an avant-garde movement in art, theater, and film, highlighted by internationally recognized artists such as Kazimir Malevich and Volodymyr Tatlin. This generation of creative figures rebranded the Ukrainian identity as modern, innovative, and European.

In Kyiv, the massive stainless-steel Motherland Monument, originally erected in 1981 to memorialize World War II soldiers, is now draped in a Ukrainian flag and wears a wreath. Its raised sword and shield have come to symbolize Ukraine’s resistance to all invaders.

Stalin cut short this cultural renaissance when he unleashed what amounted to a war on Ukraine. Show trials of Ukrainian activists and cultural figures began in 1928 and forced collectivization of agricultural production in 1930. In 1932, he curtailed the Ukrainization policy, stifled the intelligentsia, and forced all writers and artists in major cities into one organization, even into one building—the “RoLit” in Kyiv and the “Slovo” in Kharkiv. Forced collectivization sparked thousands of revolts across the country, a resistance that was only crushed by mass arrests and the death of four million people during the Great Famine (Holodomor) of 1932–33.

Ten years later, during World War II, an armed underground sprang up in Ukraine to prevent the Soviet authorities from retaking control of the country. The resistance was long and stubborn, and had widespread support in the Western part of Ukraine. This part of the country had received its first taste of Soviet rule in 1939–41, during which time it witnessed the destruction of its institutions, the deportation of hundreds of thousands, and numerous other atrocities. In the post-war years, Soviet authorities killed an estimated 140,000 members of the Ukrainian underground, in both the cities and the countryside, from where guerrilla attacks were mounted. They also arrested and deported to Siberia as many as 400,000 people, including entire families suspected of aiding the fighters. In 1951, the resistance was finally crushed when its leadership was tracked down and killed.

During the Cold War period, much of the world ignored Ukraine’s existence. Western media was content to consider the country part of “Russia,” with no agency or identity of its own. However, in 1991, as soon as the Soviet Union collapsed, Ukrainians again declared independence.

Ukraine’s most recent revolutionary cycle culminated in the 2013–14 Euromaidan protests, often referred to as the Revolution of Dignity. It began in 2004, when Viktor Yanukovych, a Russian sympathizer, tried to come to power. That year, Ukrainian protestors launched the Orange Revolution, a series of strikes, demonstrations, and sit-ins that eventually succeeded in dismissing Yanukovych’s fraudulent claim to have won the election.  Backed by Moscow, Yanukovych mounted a powerful media campaign and won the following election in 2010. Corruption immediately spread on a massive scale, as did Russia’s influence throughout Ukraine’s governing institutions and security structures. In 2013, Yanukovych suddenly reversed the policy moving Ukraine toward joining the European Union. All of Ukraine erupted in spontaneous protests, but the epicenter was at Kyiv’s Independence Square where special security forces violently attacked and shot protesters. When the protesters fought back successfully, Yanukovych fled the country. Ukraine once again moved toward establishing its independence and democracy, electing Petro Poroshenko as president, followed by current president Volodymyr Zelensky. Putin never forgot the failure to install Yanukovych as his puppet. Russia’s annexation of Crimea in 2014 was, in large part, his response to the revolution that created this setback. 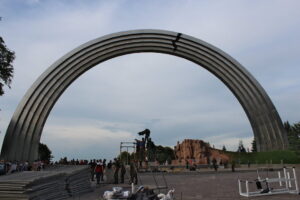 The People’s Friendship Arch in Kyiv. Courtesy of Flickr/Timon91.

Today Putin claims that his invasion is required in order to gather Russians, Belarusians, and Ukrainians into “one single geopolitical whole,” and solve “Russia’s main problem”—the Ukrainian question. In his mind, the idea of Kyiv as the capital of an independent Ukraine is a symbol of Russia’s national humiliation. He also recognizes that a prosperous, democratic, culturally vibrant Ukraine is a threat to his own rule. But beyond this he sees the crushing of Ukraine as the great opening salvo that will proclaim Russia’s challenge to the West for leadership of a new world order.

The citizens of Ukraine, however, reject Russian supremacy. An entire generation has grown up in an independent state. They speak its language, read its literature, and identify with its culture. In this time, monuments of Soviet or Russian rule have disappeared, including 17,000 Lenin statues and countless images of Stalin’s acolytes. The remaining symbols of the Soviet past have been refashioned—by painting them yellow and blue, renaming some, and metaphorically repurposing others. The People’s Friendship Arch in Kyiv, originally built in 1982 as a symbol of Russian-Ukrainian unity, has become a site of protest. In 2018, artists and human rights activists placed a sticker on it to resemble a crack—a sign of support for the political prisoners Russia had arrested in annexed Crimea. In Kyiv, the massive stainless-steel Motherland Monument, originally erected in 1981 to memorialize World War II soldiers, is now draped in a Ukrainian flag and wears a wreath. Its raised sword and shield have come to symbolize Ukraine’s resistance to all invaders.

Zombieland’s spin is facing a potent counter-narrative on the ground as Ukrainians once again reject attempts to erase their history, while they battle for their lives and country. There are echoes in today’s resistance of many past militant struggles, spanning different periods and generations. It is a history of continual and determined striving for human rights, democratic norms, and national survival.