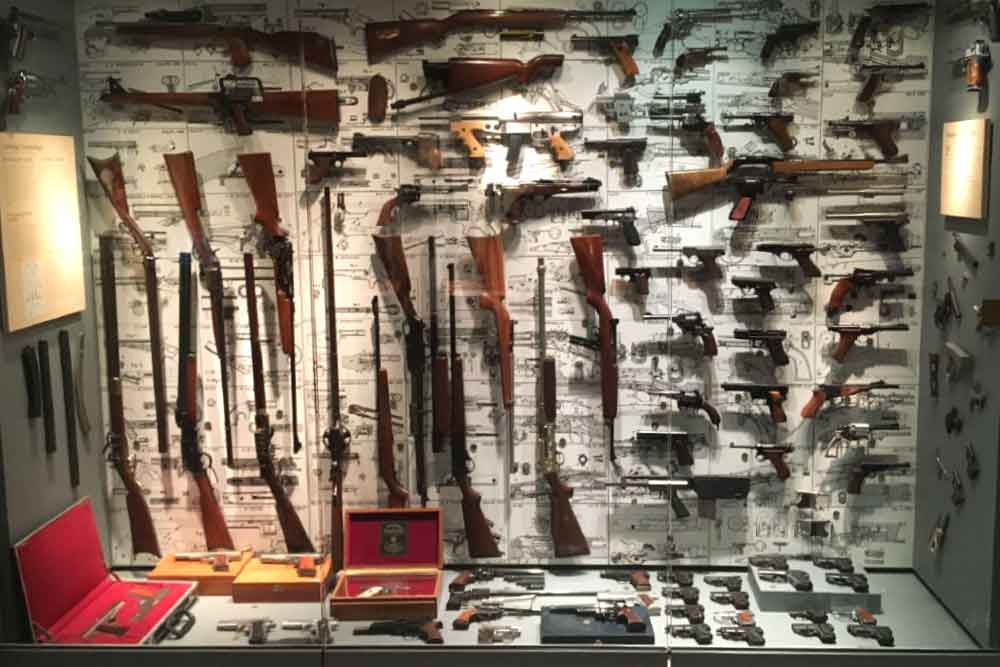 Once, I drove through Virginia slush to NRA Headquarters,

beyond thoughts & prayers, or any one word I might try

against the cinderblock grid of a school wall as she grips
a bulletproof backpack,
raising it up so that it conceals

her body more or less
behind a kid-friendly style,
which means blue with a cascade of emojis. For the last mile,

I stared at strip mall signs—Jenny Craig, Elegant Dancing,
Lead by Example Tae Kwon Do—that made me feel as if

I was lost in someone’s idea of what America should be:

to explain that a memory foam mattress sells for less guaranteed.

Without an appointment or idea

of what to do next,
I side-stepped the lobby’s Tom Selleck cutout telling me

some vague hope of what? Whatever I’d come here to find,

half-dozen geese soaring between
trigger & bolt
of a shotgun belonging to Hermann Göring. A few lines

of wall text described Bulino style, which meant, I learned,
the process of utilizing
thousands or millions of tiny dots

of grass, to a rifle’s photorealistic Rolls Royce careening toward

a woman—topless, lips parted—nestled against a tiger.
And peering into one
mounted magnifying glass I saw

a gun engraved with a Tribute to Picasso featuring,
I swear, a miniature Guernica that mimicked each detail

of his horse & bull, the one jagged light & those bodies

we’ve seen so many times—
necks craned back, each month
in a wail—rendered in a way that reduced any trace

with prayers
& mirrored vitrines, the yellow dots
of emojis wide-eyed on a kid’s armored backpack

& black dots too numerous to count,

spread across
those maps that track gun violence & for what? Then again,

nothing change. By the time
I’d finished wandering through
the other rooms, it was too late to do anything but drive

step back & see the shape made
by those black dots scattered

across the US map, although haven’t we done that already—
stepped back, & looked, & long known what we’ve made?