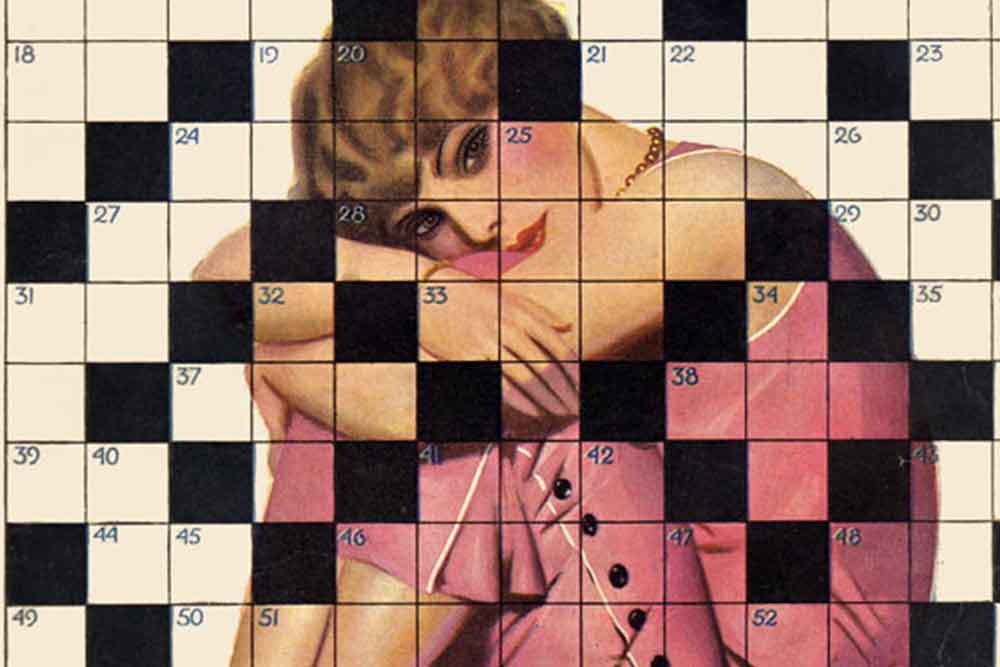 Close up of a Judge magazine cover image from 1924. Public Domain

In its short lifespan, Wordle has already made the tricky transition from cult phenomenon to established part of our daily lives.

Created by a software engineer in Brooklyn for his partner in October 2021, the online word puzzle game gives you six tries to correctly guess a five-letter word each day. Its no-frills design, once-daily refresh, and spoiler-free way to share results on social media has turned it into an overnight success.

But the game’s swift pop culture ascendancy, which led to it getting acquired by the New York Times for upward of $1 million in January, isn’t unprecedented. In fact, 100 years before Wordle entered the scene, an even bigger word puzzle craze swept the nation.

The modern “word-cross” appeared for the first time in print in the December 21, 1913 edition of New York World’s FUN Supplement. Section editor Arthur Wynne, trying to fill the Christmas insert, drew inspiration from his native England, where Victorian newspapers and magazines regularly published word squares, acrostic puzzles where the same words can be read both across and down.

Building on this prototype, Wynne debuted FUN’s Word-Cross Puzzle. The game looks different than what we’re accustomed to today—it’s shaped like a diamond, with 72 white squares clustered around a blank center. But the instructions are familiar: “fill the small squares with words which agree with the following definitions.” 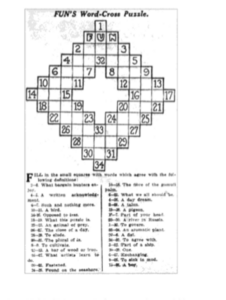 The word-cross—which eventually became cross-word, likely due to a type-setting accident, and later dropped the hyphen to become, simply, the crossword—wasn’t supposed to be a regular feature in the weekly supplement. Wynne found the prep work tedious, and typographers resented setting up the puzzle shape for print. But players were hooked; when the word game didn’t appear one Sunday, they demanded to know where it had gone, helping ensure that game stayed on as a regular feature for FUN.

Readers weren’t just doing the crossword, they were also actively sending in construction submissions for consideration. Wynne bemoaned the boxes of submissions that started filling up his office. “The editor of FUN receives an average of twenty-five cross-words every day from readers,” he wrote in 1915, adding drolly that “the puzzle editor has kindly figured out that the present supply will last until the second week in December, 2100.”

By 1921, Wynne had had enough, handing over the reins to Margaret Petherbridge, an aspiring reporter who was languishing as secretary to the paper’s Sunday editor. At first, Petherbridge viewed the task much as Wynne had—a Siberia assignment—and like him, she rubber-stamped submissions for publication. Because of this, early crosswords regularly went to print untested and riddled with spelling errors, misnumbered definitions, and incorrect clues. But this changed after famed columnist—and noted crossword fan—Franklin Pierce Adams joined the World. Recognizing the game’s high-profile fan base, Petherbridge realized that she could make a name for herself if she really took ownership of the game. In turn, she and her colleagues, F. Gregory Hartswick and Prosper Buranelli, began setting the puzzles a full week ahead, proofing them for errors and establishing uniform standards, like only using dictionary words for game play.

The crossword was coming into its own, but it would take another year for it to truly go viral. Anecdotally, Richard Simon’s aunt, a fan of the game, is to thank for this: as the story goes, she inspired Simon and his partner Max Schuster to publish the world’s first crossword book as a launching pad for their new book publishing house. The $1.35 book —which came with an attached pencil (a cross-promotion with the Venus Pencil Company)—proved to be a smash success, laying the foundation for Simon & Schuster to become one of America’s biggest publishing houses.

The crossword started appearing everywhere. Families used them to announce engagements, including the pending union of Miss Katherine Langley and James G. Bentley of Pennsylvania. The Baltimore & Ohio Railroad announced it would put dictionaries on trains to “come to the aid of traveling cross-word puzzle enthusiasts.” One speaker at the Amateur Athletic Union’s annual meeting took the time to bemoan how much the hobby had bled into practice time. “The fascination of the puzzles is keeping the athletes of the country away from their training,” he alleged. “They put on their running or bathing suits and then stay in the locker rooms asking each other for words that fill in the white spaces of the puzzles.”

Currently more than 50 million Americans do them, and the crossword appears in every major daily newspaper.

“Crosswords were the Beatles of 1924,” Petherbridge, who would go on to become the New York Times’ inaugural crossword editor under her married name, Margaret Farrar, later remarked.

By 1925, even Queen Mary (along with “lesser members of the royal family”) had taken up the pastime. But with all the buzz—including an original Broadway musical Puzzles of 1925 and a pop song—came pushback. 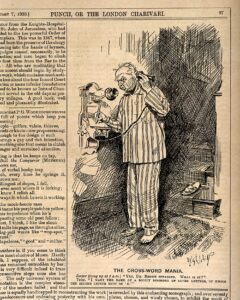 A crossword fanatic ringing up a doctor in the middle of the night to find the answer to a clue. Reproduction of a drawing after D.L. Ghilchilp, 1925. CC BY 4.0

Just as Wordle has its share of detractors (a phenomenon only magnified by social media), a look back at newspaper reports from the 1920s shows that the crossword faced its own number of critics.

Some of these complaints against the crossword feel quaint. For instance, the president of the British Optical Association blamed the crossword for eye strain: “Qualified opticians,” he said, “could perform valuable service to the public in warning them against over indulgence in the pastime under wrong conditions.” Other accusations, however, that sought to dismiss the game’s worth, read more like contemporary Twitter screeds. Take one pastor who used his sermon to declare that “the working of cross-word puzzles is the mark of childish mentality.” He continued, “there is no use for persons to pretend that working one of the puzzles carries any intellectual value with it.”

A literary debate around puzzling also raged: Should the crossword be taken seriously? The Carnegie Library of Pittsburgh, for one, “answered in the negative” when it reported it had no crossword books on file, and no plans to acquire any. “[T]he city’s money should be spent for more serious purposes,” one icy statement read.

Combing through coverage of crossword puzzles in the 1920s, I’m struck by how convinced its detractors were that the game wouldn’t have long-term relevance. But of course, we know now that the crossword wasn’t going anywhere. Currently more than 50 million Americans do them, and the crossword appears in every major daily newspaper.

Those who want to write Wordle off as a fad today would, in turn, do well to heed the advice of the Chicago Department of Health of 1924, which prescribed the crossword for “general health and happiness.” The slim bulletin, titled “Crossworditis,” asserted that “part of our lives and much energy must be put into amusement, to satisfy the play instinct within us.”

Wordle and the veritable cottage industry of derivatives that have already sprung up in its wake—from Heardle, which uses audio clues to popular songs, to the NSFW Lewdle, to the Taylor Swift-themed Taylordle—may be more contemporary in tone and tech than the crossword of the 1920s, but they continue to fulfill that same need for a new generation of fans.

After all, as one reporter observed when the crossword was just taking off, puzzling itself—“despite its furious vogue at the moment”—was nothing new: “Through the ages it runs,” the article noted, “with each age setting for itself its own brand of riddle.”