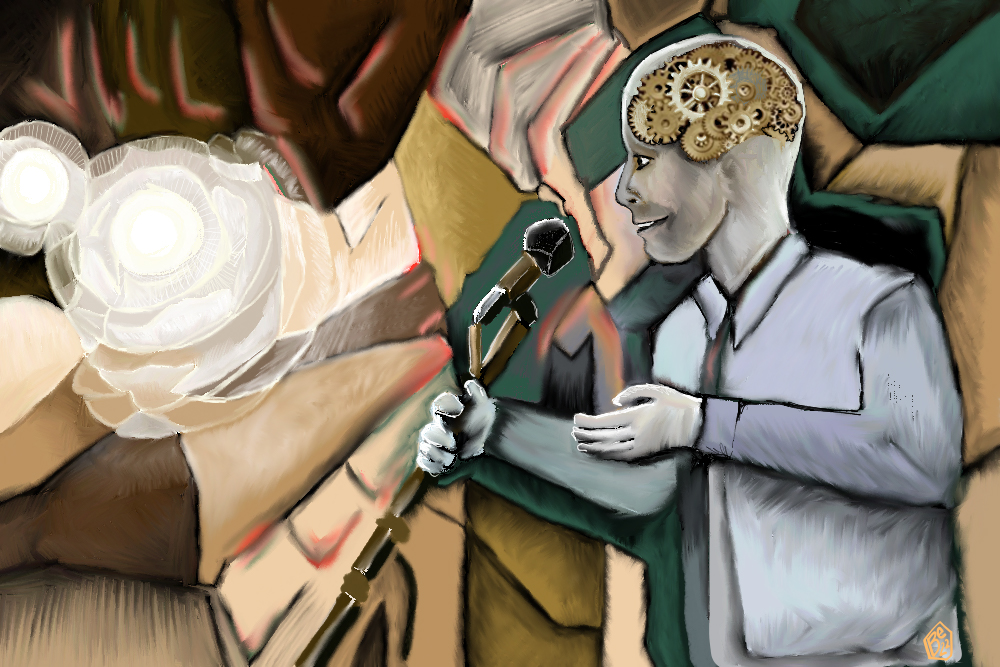 The mentalist asked my wife at the time and another woman—someone we did not know—to get up from the audience, to stand about 8 feet apart in the performance area, and to close their eyes. He silently touched the woman with a feather, twice, on different parts of her arm. He then asked my wife, whom he never approached, if she felt anything.

“Yes,” she said. Something had touched her arm.

“Where?” the mentalist asked.

My wife pointed to two places—the same spots he had touched on the other woman’s arm.

“What did you feel touch you?” the mentalist then asked my wife.

Her answer: “A feather.”

The audience gasped audibly. This was inexplicable. Over the next hour or so, this guy performed impossible feats of thought-reading, precognition, telekinesis, and verbal persuasion. If I had seen him on TV, I would have sworn he was using stooges, confederates, camera tricks, or doing some sort of “cheating.” But I had no explanation for what I saw in that hotel suite that night. I know there were no confederates. My wife volunteered in a couple more demonstrations, and I knew she wasn’t in league with the mentalist. (Or, perhaps she was, which would explain our eventual divorce.)

Right then and there, I became hooked. Mentalism provided me with a new passion, an obsession. What drew me in was the mystery of it all—the power to read and control thoughts, the ability to predict actions, and the opportunity to perform a wondrous, other-worldly show.  Having someone merely think of a drawing, then taking a pad and duplicating their vision perfectly?  Or handing someone in your audience (not a stooge) a sealed envelope at the beginning of the show, and opening it at the finale to reveal every single choice made by spectators throughout the night?

Mentalism forces people to consider that things they previously thought to be impossible are, in fact, possible. My father was a philosophy professor at New York University for more than 50 years. Mentalism, like philosophy, involves the quest to figure out the unknown; there’s a strong metaphysical aspect to it. And, like stand-up comedy, mentalism asks its practitioners to observe the human condition, find the things we have in common, and make a connection with the audience. Both are all about understanding patterns.

After that demonstration at the Waldorf, I wanted to understand how it worked, and to learn how to read thoughts myself. I probably acquired close to a thousand books on mentalism, and several hundred videos. I found a couple mentors, too. I started practicing whenever I could, doing simple demonstrations everywhere I went. I worked up one demonstration where someone drew a picture and I duplicated it without ever seeing it, standing in a far-off location. I perfected another where I asked a person to think of a loved one, and then I guessed their loved one’s name. After blowing people away, everywhere from dinners out to the checkout line, I started doing my mind-reading act at parties, and eventually I took a shot at going pro. Over the past 10 years I’ve traveled around the world several times, performing in hotels, comedy clubs, cruise ships, and theaters.

Mentalism provided me with a new passion, an obsession. What drew me in was the mystery of it all—the power to read and control thoughts, the ability to predict actions, and the opportunity to perform a wondrous, other-worldly show.

The longer I do this work, the less I believe in the supernatural and the more I believe in intuition. So much of what I do is based on psychology, observing human behavior, and recognizing patterns of thought and body language. It’s also about knowing how to control someone’s choices through linguistics or “verbal judo,” as mentalist Andy Nyman calls it. I can get a volunteer to make the choices I want them to make without them, or the audience, ever getting a sense of my process.

One of the greatest mentalists of all time, the late Bob Cassidy, once said, “If you want to be real, don’t claim too many talents.” Mentalism includes thought reading, thought sending, clairvoyance, remote viewing (seeing something from a far-off location), and psychokinesis (which consists of effects like metal bending). Can I bend cutlery and coins? Sure, but I heed Cassidy’s advice, and I don’t. If I step onstage and bend a fork with my brain, it makes everything too unbelievable. “You can pick up on thoughts and you can bend spoons?” an audience member might say, the seeds of suspicion creeping in.

My favorite mentalism exercises rely on verbal persuasion techniques—using spoken language, and body language. There are no props. It’s not sleight of hand, like traditional magic. It’s sleight of mind, and it draws on neuro-linguistic programming, hypnosis, statistics, behavioral patterns and other science-based methods. And while sometimes I’ll fail, that ultimately is to my benefit: getting something wrong offers credibility, because what mind reader would make an intentional mistake?

So, yes, what I do is real, and I present it as such, as do many of my colleagues. But I believe it is not ok, nor ethical, to say we can talk to spectators’ dead relatives, or to prey or profit on people’s grief. Some mentalists offer a disclaimer before their act, informing the audience that there’s nothing supernatural involved. I respect the impulse, but from a performance standpoint, I think this is counter-productive.  As Cassidy used to say, “Why would anyone pay to see a fake mind-reader?”

I never say what I am doing is real, or that it is a trick of the mind. I leave that to the audience to decide for themselves.