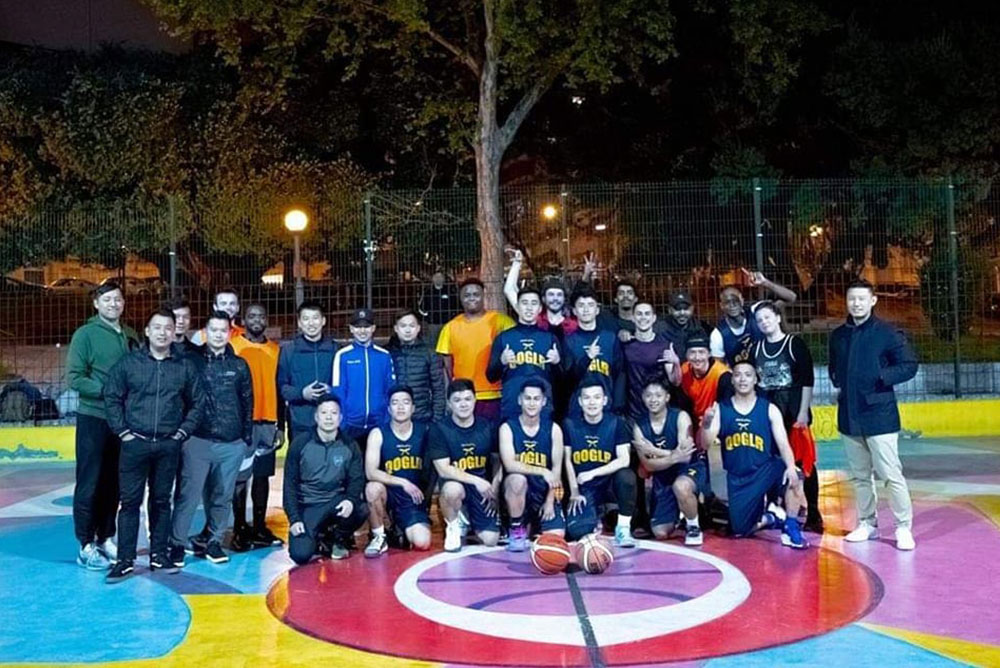 When I arrived in Lisbon in late 2016, I was in the best basketball shape of my life. I had just finished a master’s degree in Scotland, where I had started for the university’s second team (and rode the bench for the first). So one of the first things I did after unpacking was to seek out what I’d heard was the best basketball court in the city.

I’d moved to Portugal after securing some remote freelance work. My plan was to add a language to my lopsided resume—I already spoke Spanish passingly and knew that the modest difference between the two would enable me to achieve a baseline of fluency in a matter of months, rather than years—but there were also sentimental reasons for the move: except for my mother, all my matrilineal relatives live in Portugal. I wanted the chance to better understand my family, who, for most of my childhood, had existed as faceless names on the other end of pricey international calls, and to better understand where I came from.

Portugal is also a favorable country for those looking to immigrate: between its aging population, a small existing foreign-born population (just over 5 percent of the country’s 10 million residents, compared to 15 percent of neighboring Spain, and 12 percent of France), and a brain drain, authorities know that the country needs young foreigners serious about establishing roots, and has accordingly lax immigration policies. Just the “promise of a work contract” is enough to secure residency. What I didn’t know was how the connection between those policies and my love for basketball would come to define my life in Lisbon.

The best court, I’d been told, was located at the top of a 10 square-kilometer nature reserve called the Parque Florestal de Monsanto, just outside the city center. The bus ride from my apartment took the better part of an hour, and the hike up to the court added another 20 minutes. The view was beautiful, overlooking Lisbon’s famous 25 de Abril Bridge, but the height meant constant wind, which made for a uniquely poor basketball experience. The empty court, the long trip, and the suboptimal conditions confirmed what I already knew: Portugal isn’t big on basketball. I resigned myself to the idea that the sport wouldn’t be part of my life here.

Then I took a shortcut that changed everything. Running late to meet up with some friends at a reggaeton bar in Bairro Alto, I decided not to risk waiting for the metro and began to cut haphazardly across the residential labyrinth situated between the blue and green metro lines. As I made my way through the Campo dos Mártires da Pátria park, I noticed a few young men playing basketball.

The Campo dos Mártires da Pátria park itself is not especially remarkable: there’s a duck pond for young parents to bring their children, a small gazebo to buy coffee. It’s a speck of green in a city known neither for its shade nor its verdure. But its basketball court—a vibrant, multicolored mosaic of geometric shapes and patterns—is a work of art. I couldn’t resist. Despite being dressed in chino pants and a short-sleeve button-up (in preparation for a night of drinks and dancing), they welcomed me in to play. By the time the game was over, the Campo already felt like my second home. This wasn’t only because the Campo was clearly the court for basketball in Lisbon, but also because most of the players it attracted were, like me, foreigners.

The empty court, the long trip, and the suboptimal conditions confirmed what I already knew: Portugal isn’t big on basketball. I resigned myself to the idea that the sport wouldn’t be part of my life here. Then I took a shortcut that changed everything.

Everyone had a story about how they’d ended up in Portugal. Agnelo, the de facto administrator of the Campo, was a thirty-something Angolan who’d come to Lisbon as a teenager. I thought at one point that he worked in construction because one of the other players kept calling him “o pedreiro mais famoso de Lisboa”—the most famous bricklayer in Lisbon—but I later realized that this was a literal translation of an English-language insult for someone who can’t make a shot: “Brick!” Agnelo could dish out the trash talk just as well as he received it, but it was his peacekeeping that I remember most. Even from the other side of the park, you could hear his pleas to get the game going again: “Play, man! Let’s just play!”

Over sweaty post-game beers, I talked literature with Amsfgoro, a Cabo Verdean man who’d come to Lisbon for a master’s degree and then decided to stay. We bonded over a shared love for the quiet, muted intensity of South African author J.M. Coetzee’s prose, and Amsfgoro introduced me to the work of José Eduardo Agualusa, the first Portuguese-language author I felt comfortable reading in the original. Yuri, who’d come from Cabo Verde on a student visa, gave me invaluable advice for navigating the perils of Portuguese immigration bureaucracy and taught me that I was not the only one feeling quagmired. I had been told to extend my tourist visa for an additional three months while I waited for my citizenship application to process, for instance, but the wait time for such an appointment was almost as long as the length of my original tourist visa: 88 days. It turned out that countless basketball friends had found themselves in this semilegal purgatory: technically legal in Portugal, but worried or unable to leave for fear of negative visa repercussions. Knowing that I wasn’t the only one gave me some solace.

It should come as no surprise that the Campo was also the site of my biggest Portuguese breakthroughs. As we were packing up one summer evening, I got to talking with João, a Brazilian exchange student studying engineering. After I stumbled over the Portuguese word for it—enghenharia—he started laughing. “Oh shit, you aren’t Portuguese! I always figured you were from here.”

Some of João’s mix-up surely had to do with the kind of Portuguese required for pick-up basketball. It’s easy to disguise an insufficiently nasally diphthong or an overzealous shhhh sound at the end of a word when the only phrases one really needs are jeers like Lança! Vamo jogar, então? and Tás a brincar comigo ou que? But his accidental vote of confidence made me feel like I’d achieved what I’d set out to do. Though my preference for rougher, more physical play and my tendency to “travel” (according to European rules, at least) might still quickly give me away as being from the United States, my speech now revealed that my connection to Portugal was more complicated.

Several years later, after I’d returned home to California comfortably fluent in Portuguese, I made the trip back to Lisbon. When I arrived, I found many of my non-basketball friends had moved on—Europeans to their home country, Portuguese to the sleepy coastlines of Setúbal or rainy Porto, digital nomads to chase Germany’s elusive freelancer visa or try to get in early on Estonia’s burgeoning startup scene. But when I showed up to the Campo on a random Wednesday evening, I was greeted by the same familiar faces, now with a few extra gray hairs, and more knee sleeves to keep temperamental ACLs warm. There were new faces, too, but returning a few days later, I could already understand who preferred to roll to the basket and who stayed behind the three-point line.

The beauty of the Campo is this continuity: turnover happens, but the community endures. It’s a wonderful feeling, knowing that you can return to a place and, if you’re willing to wait until next game, there’ll be a spot for you. In some way, this describes my relationship to my family in Portugal, too. Even as younger relatives graduate from high school and older ones retire, and as those pricey international calls have been replaced by WhatsApp, someone familiar will always be on the other end of the line. A shared language means the relationship will endure.

As Portugal continues to shift and evolve—post-dictatorship, post-recession—one thing feels certain to me: the Campo’s stability and its open-doors policy. As the group’s Facebook page reminds players: “Convidamos TODA A GENTE a APARECER,” EVERYONE is invited to SHOW UP.