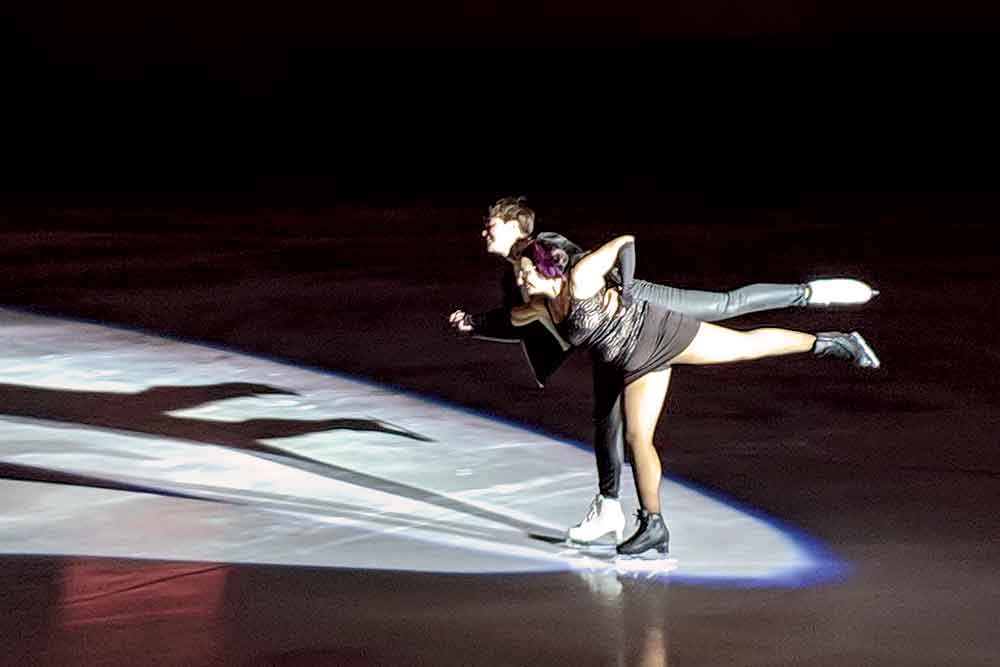 When 25-year-old Mariah Bell competed in Beijing yesterday, she made history as the oldest U.S. women’s national champion in 95 years to step foot on Olympic ice. But “advanced age” aside, don’t call Bell an adult skater.

With triple/triple jump combinations at her disposal, Bell—like the rest of the elite women’s field she’s going up against—is considered a women’s singles skater. (Remarkably enough, the International Skating Union dropped “ladies” from the moniker only last June.) In figure skating, “adult” designates something different: a huge community of athletes, 21 and older, who aren’t competing for Olympic rings, but contribute to the lifeblood of this sport.

Adult skaters can range from casual participants to those who arrange their entire lives around the ice. Over the past 20 years, I’ve come to fall into the latter category. When my work schedule allows for it, I’ll squeeze into my schedule practice sessions, a late-afternoon coaching job, and trips to New Hampshire from Portland, Maine, for an edge class or a lesson with my pairs partner. And that’s just on a good week. On a great week, add on training as a solo skater, cross-training, taking and teaching other classes, skating in a performance group, and participating in those local recitals known as the annual and holiday ice shows.

I never saw any of this coming. While I skated some growing up—enough to learn beginning jumps and spins—my family didn’t have the money or parental availability for serious training, nor really any notion of it. When I hurt my knee on a botched half-revolution jump at age 15, I thought I’d hung up my skates for good.

That changed during my 40s, when I moved to Portland—which was 35 miles further away from work and, consequently, my refuge from it: aerobics at the Y. I decided to try skating again, largely for exercise. I bought my first pair of skates in almost three decades, found a rink four blocks from my apartment, and ventured out onto the ice. This time around, the pleasures of the glide hooked me instantly. Assisted by beginner adult classes, dim muscle memory, and generous tips from others at public skating sessions, I re-acquired the basics fairly quickly.

I’ll never forget my first ice show. Just a few months into starting those adult skating classes, my classmates and I talked ourselves into participating. At the first rehearsal, our coach-choreographer explained that in the adult group number, Artists and Models, the men would play artists while women played models. Eek. As a feminist cultural critic by trade, I have spent my life combatting those stereotypes. But damn: to wear that sparkly red and black mini-dress costume, to watch skaters my age or even much older jumping and spinning, to experience the joy of moving to music, forming a kick line, making new friends, joining a community. Wow. Twenty years later, I still get emotional when I think about that week. It transformed my life. 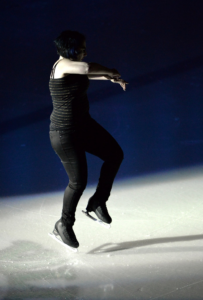 Some of the changes were small and sideways. For example, even though I’ve long identified as a queer femme dyke, with skirts and nail polish as standard fare, shaving always felt like an abandonment of feminism. A week of giving myself over to mainstream skater femininity—matching costumes, mandatory make-up—somehow helped me admit to myself that I hated my armpit hair. Other changes were more profound. Immersion in show week extracted me temporarily from the academic value system that I’d trained in since the late 1970s, which offers bonus points for misery, as if working all weekend signals dedication rather than bad labor politics. I held onto that.

Then there was the skating itself. Soon after the show (and undeterred by a sprained wrist from falling on a back three-turn), I graduated to freestyle where I started doing jumps and spins, along with more advanced work on aspects of skating that, despite being sometimes flatly labeled “skating skills,” captivate me. The edges and turns, the power in the push—“Don’t look down!” “Bend your ankles!”—all contribute to flow, grace, and speed on the ice and to the intense sensuality that comes from strength and sweat, wind on skin.

Over time, I’ve come to treat my skating as ethnography—meaning I systematically study skating as a culture, partly to justify more skating as part of my actual academic job. This began in earnest when I decided to compete in the 2006 Gay Games, an international multi-sport event for adult athletes at all levels. Knowing I would have to fight my inherent shyness to perform, I decided to turn the experience into a book project, which not only ensured I would see the competition all the way through, but also helped me meet more people in the skating world along the way.

Yet being so involved in skating has also made me even more aware of interlaced problems baked into the sport, including white supremacy, homophobia, and rigid, racialized gender norms.

After the Gay Games, as part of my participant-observation research, I started coaching adult beginner classes and doing more adult competitions, including the annual U.S. Adult Figure Skating Championships, or “Adult Nationals,” where, typically, some 450 skaters compete in around 100 events. You can qualify your way in by passing skills tests. I skate at the low Adult Bronze level in age category IV, the 56- to 65-year-old group, just a few years shy of category V (affectionately known as “66 ‘til death”). These experiences let me share my love of skating and dwell in physical, mental, and artistic challenges of training and competing.

Yet being so involved in skating has also made me even more aware of interlaced problems baked into the sport, including white supremacy, homophobia, and rigid, racialized gender norms. Subjective components in the judging process make it possible to reward looks, music, and choreography linked to aristocratic whiteness. Also, because athleticism itself is often considered male, figure skating culture often favors women who showcase delicate over strong, and men who emphasize heteronormative masculinity. These standards harm and limit skaters, and play out in ways both explicit and subtle.

I can’t prove I’ve ever been downgraded for being an outlier. And my white skin is a shield that brings me in line with most people I skate with and the racialized ideals of the sport. But with black skates and my shortish pink and black hair, I’ve never quite fit in performance group or at competitions, where, to my initial shock, most women compete with hair in a bun or ponytail and a standard costume, involving a flared skirt, matching panties, and traditional sources of sparkle, like shiny tiny stones glued on, while I sometimes find my sparkle through fake metal chains or shiny plastic bustiers. Some skaters love a traditional look. That’s great. But when skaters have complimented my choice of costumes as brave, I’ve occasionally caught a wistfulness in their voices; I recognize they feel pressure to conform to skating norms. And I know that being repeatedly othered—even based on dubious standards—can feel like crap.

That’s one reason I’m excited to see more stories like American ice dancer Karina Manta’s new memoir, On Top of Glass: My Stories as a Queer Girl in Figure Skating, which details the soul-killing image policing she endured, and overcame. Watching the 2019 U.S. championships, where she and her ice dance partner Joe Johnson, performing to Sweet Dreams, got a standing ovation for kickass skating by out queer skaters thrilled me. So does the prospect of watching U.S. pairs team Timothy LeDuc and Ashley Cain-Gribble compete this Friday. LeDuc is the first out nonbinary athlete at a Winter Olympics; Cain-Gribble departs from gender expectations, too. (That people consider her unusual at 5’6” tells you a lot about the “little pair girl” stereotype.) Their long program, Two Pillars of Strength, differs in choreography and costume from common pairs programs that often narrate heterosexual romance and underscore gender opposition. Traditional routines emphasize strength as a male attribute, despite the significant power it takes to be the person who is lifted or thrown, the role officially designated for women. 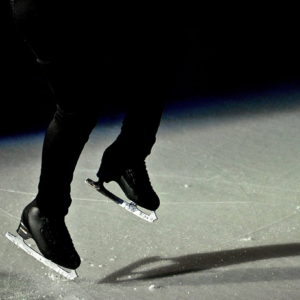 Deep into tricep dips, I have good reason to know. My skating partner, Anna Kellar, is trans nonbinary and I’m a cisgender woman, and together we make up our own gender-nonconforming team of two white queer skaters. Skating together compounds our pleasure, as we learn to skate in relationship, with exciting new tricks and challenges. Doing our throw-waltz jump, I soar through the air and accelerate out of the landing when we get it right. It’s exhilarating. On the ice with them, I see a better future for this sport that has lost its foothold, and the potential that exists to make skating more popular and relevant at all levels. Just the other day, one of my beginning students told me that they’d blazed through that book I’d begun while training for the Gay Games. To discover that other people, including their coach, were thinking about the same issues that they were made them realize that they didn’t have to sideline part of their identity to figure skate.

But I also know there’s a long path to regularizing inclusivity. U.S. Figure Skating being “proud of Timothy LeDuc” might help people understand my pairs team, but it doesn’t help us take the qualifying test or compete together. According to the USFS rulebook, while any two people skating in harmony can make up a pair, and while people can now join USFS as male, female, or “undeclared,” testing requires a male/female pair, and competitions can occur only among like-gendered pairs. Antiquated rules abound.

So do systemic bias and microaggressions against BIPOC skaters, despite new institutional commitments to change.  I’m inspired by Black and Brown skaters, often queer, trans, or gender-nonconforming—and routinely scored unfairly—who have long been at the forefront of figure skating change. Take Rudy Galindo, who won the 1996 U.S. Men’s Championship and has had a long professional career as an out Latinx skater and coach. Or Canadian skater Elladj Baldé, who has become a social media presence in the wake of the murder of George Floyd and the uprising against anti-Black violence. His performances on TikTok and Instagram defy racism through music and movement that model the freedom of skating with authenticity.

All coaches, judges, administrators, choreographers, skaters, skaters’ friends and families, and fans need to work for change, not just the marginalized among us. Check out the Figure Skating Diversity And Inclusion Alliance’s  Conversations in Color, including “Skating While Black” and “No I am Not Michelle Kwan: Being East Asian in Figure Skating.” Learn about the anti-trans policies, now on the upswing, that harm athletes from elementary school through professional sports. Watch Open Ice: Visionaries, a 2021 documentary by queer Olympic ice dancer Kaitlyn Weaver, in which  Finnish champion Kiira Korpi, addressing physical and mental wellbeing, asks us to reconsider the common belief that it’s a virtue to train and compete while sick or injured and promotes coaching and skating practices that emphasize self-compassion.

As for me, I continue to bend my life (and my job) around this sport. By now, skating has become baked into my body. When I first returned to the ice after lockdown, I realized, in reacclimating, that I ordinarily experience my skates, even when they hurt, as an extension of my feet. At the rink, I’m a taller person whose feet end in knives. I wouldn’t have it any other way.