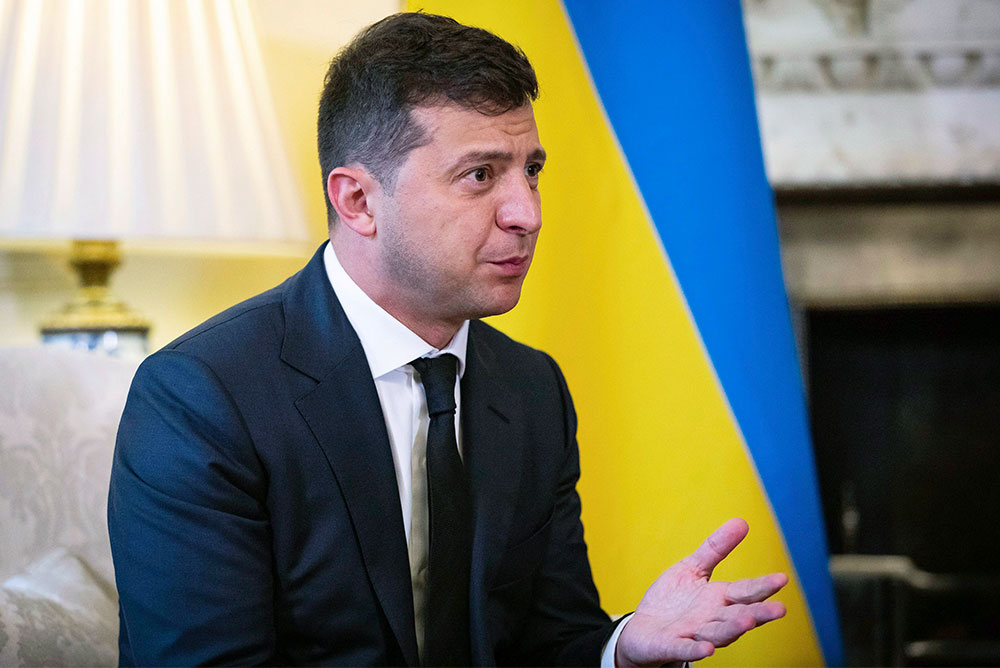 Should all world leaders be former comedians? If Ukrainian President Volodymyr Zelensky is any indication, it’s an option worth considering.

The New York Times, Politico, and the Washington Post have all analyzed Zelensky’s comedy and performance to find some connection to his inspiring leadership style. “Indeed, watching Zelensky now,” the New Yorker’s Adam Gopnik wrote, “one does not think, Oh, wow, he once was a comedian! One thinks, This is what a comedian looks like in power.”

However, as the war has progressed and its horrors have become more evident, I think Gopnik’s observation should be flipped: Our thinking “he once was a comedian!” is the key to Zelensky’s moral authority during this crisis. Zelensky’s ability to pivot from silliness to seriousness, convincingly and completely, amplifies the power and gravity of his actions.

When examining the intersection of comedy and politics, it’s important to state a distinction: Volodymyr Zelensky is a funny person who became a politician, not a politician who happens to be funny. And the bar for being a “funny” politician is low. Consider a 1964 quotation compilation titled The Humor of JFK: It’s a mercifully thin book. (One line does still hold up: Kennedy joked that his rich father ordered him not to “buy a single vote more than necessary” because “I’ll be damned if I’m going to pay for a landslide.”)

Ronald Reagan made plenty of genial quips; Donald Trump was a fountain of caustic put-downs, and both were in the entertainment industry before they were in politics. But neither ever had to be hilarious for a living, day in and day out. While we have a sense of Reagan, Trump, or JFK without their humor, we can’t separate Zelensky’s rise from his work in comedy.

Our closest American equivalent is Al Franken, who was famous on Saturday Night Live before he won a Senate seat in Minnesota. Like Franken’s comedy, Zelensky’s ranges from purely silly (simulating playing “Hava Nagila” on a piano with his genitals) to thoughtfully satirical, on his hit television series Servant of the People. On the show, which aired from 2015 to 2019, Zelensky played Vasily Petrovich Goloborodko, a frustrated history teacher who delivers an anti-government rant to his class. The lesson goes viral, and Goloborodko is elected president of Ukraine, where he experiences the corrupting temptations of power and privilege and the inept bumblings of bureaucrats. Zelensky’s performance connected so deeply with Ukrainians that it launched him into real-life politics.

After Zelensky’s 2019 election, it would have been easy for critics to write off his presidency as a joke. Zelensky didn’t let them.

If the typical politician gets too much credit for being funny, I think the opposite is true for the comic-turned-politician, who has to impress by demonstrating seriousness. In office, Al Franken was a sober and earnest presence. Knowing that he had played the absurd self-help guru Stuart Smalley didn’t undermine Franken’s sincerity—it underscored that he had matured into a new role. Franken’s once having been a comedian, and his unusual path to government, often made him seem more, not less, authentic.

After Zelensky’s 2019 election, it would have been easy for critics to write off his presidency as a joke. Zelensky didn’t let them. He managed to pass anti-corruption legislation, and taking an unusual stance for an Eastern European politician, staunchly defended LGBTQ rights when confronted by a heckler during a marathon press conference.  He has approached war, too, with unwavering seriousness: remaining in his country in the face of great danger, galvanizing the world in a United Nations speech detailing Russian atrocities.

Humor may help a leader get votes, but once elected, a savvy and responsible leader knows when to evolve and find the right tone. “No leader wants to be thought of as ‘insubstantial,’ much less a clown,” said Patric Verrone, a comedy writer who served as president of the Writers Guild of America during its 2007 strike, which put thousands of his colleagues’ careers on the line. “The danger is making sure that you don’t ‘yuk it up’ so much that people don’t take you seriously,” he told me.

Playing against type is more powerful that trying to live up to it. Imagine if Zelensky’s hit show on Ukrainian television had been not Servant of the People, but Fury Force 5 or something similarly over-the-top, and Zelensky’s career had been more Arnold Schwarzenegger than Al Franken. Would his reported comment, “I need ammunition, not a ride,” have had the same impact? I doubt it. A fake action hero maintaining his persona in the face of actual danger seems out of touch, not inspiring. When Schwarzenegger was governor of California, his attempts to tap his fictional persona often fell flat. He has said he regrets calling legislators “girly men,” a term which originated, coincidentally, on Saturday Night Live. In contrast, Schwarzenegger’s recent appeal to the people of Russia, in which he spoke candidly about his father’s membership in the Nazi party, drew a positive reaction for being emotional and somber.

David Goodman, another comedy-writer-turned-serious-WGA-president, thinks that many comics have instincts that drive them away from leadership roles. “Politicians hate being laughed at; comedians or comedy writers, on the other hand, are not only used to being laughed at, they actually seek it out,” he said. Which makes it doubly impressive, Goodman added, when someone like Zelensky deftly handles a situation of such magnitude.

When we see a former comedian face the likelihood of death and call the world to account, we see a human being rising to meet the moment. We see someone transformed. As Adam Gopnik points out, it’s a sharp contrast to Vladimir Putin’s imperial posturing. Putin is surely someone who hates being laughed at. But he is trapped in his persona, a one-dimensional figure who may earn obedience but can’t surprise us enough to earn respect.

Comedy depends on surprise—a punchline is an idea that we didn’t see coming. And in the midst of a brutal war, “Oh, wow, he was once a comedian” may be the most inspiring punchline of all.