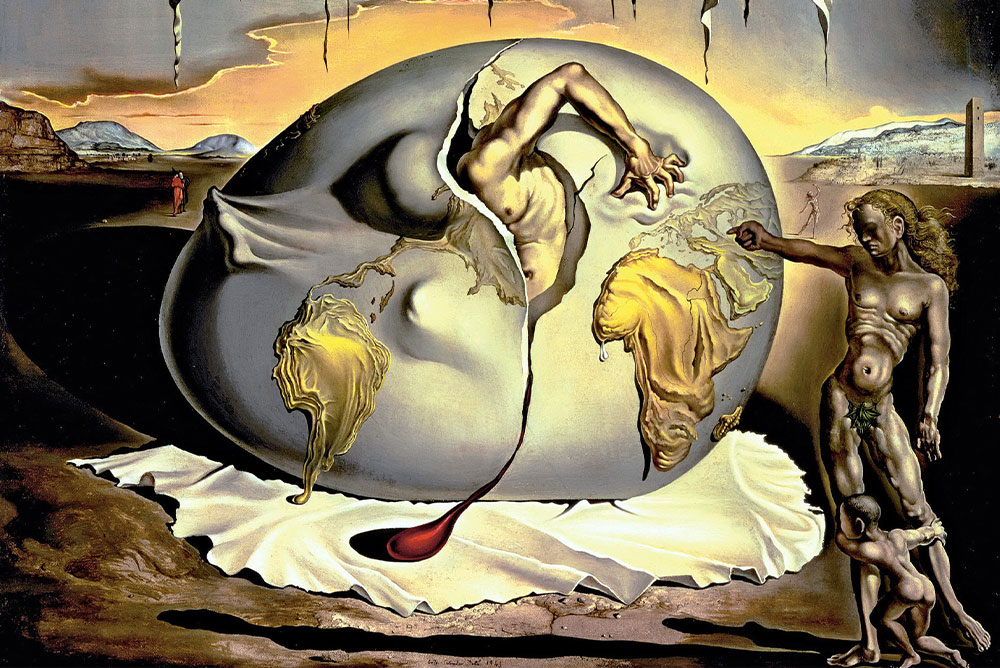 This image from Salvador Dali’s “Geopoliticus Child Watching the Birth of the New Man” (1943) depicts the birth of the U.S. as a world superpower. Today’s war in Ukraine highlights the more precarious state of U.S. geopolitical influence, argues Manlio Graziano. Courtesy of Lluís Ribes Mateu/Flickr.


The Russian war in Ukraine is a calamity—for the people suffering through it, for Ukraine, for Russia, for Europe (which has lost its strategic compass), for China (which needs stability to develop faster than its competitors), and for most of the world (due to the energy and food crises it is triggering).

But it is by no means a calamity for the United States.

Please forgive the complexity of the argument that follows. But geopolitics, which I study, addresses complexity. And this war has taken geopolitics backwards.

When a war breaks out, we rediscover how, as human beings, “we have not yet crept on all fours from the barbaric period of our history,” as Leon Trotsky wrote at the outbreak of the Balkan wars 110 years ago. We also fall back, in a Pavlovian way, into a sort of blind herding together, developed in the age of caves. The will to understand, when it exists, is overwhelmed by the need to take sides, to uncritically merge behind the dominant opinion.

Recently, an erudite Italian newspaper cast blame on “demagogues of complexity”—those who, instead of cheering for one side or the other, take the trouble to delve into complexity to try to understand reality. The thesis would be that, in this war, the thing does not need to be excavated: There is an aggressor and there is the victim, and therefore we must take sides.

Simple, linear, incontrovertibly human. It is a pity that the same newspaper, in 2003, sided with American (and British, and Italian, and Spanish, etc.) aggressors against the attacked Iraqis. It is a pity that the world is full of assailed peoples that we forget to defend and support. It is a pity that, in Russia, the overwhelming majority of the population believes that the Ukrainians are the aggressors and the Russians the victim, and that this “special military operation” is an act of self-defense.

If one does not face complexity, one is a victim of propaganda: a willing victim—because one wants to shelter in the herd when danger approaches—but still a victim.

Russians have never wondered why they “lost” Ukraine and are now told they must have a “military operation” to reclaim it. They’ve never examined why Ukrainian ruling circles felt the need to slide towards Europe and NATO protection. If the Kremlin had tried to answer these questions, perhaps all the miscalculations that led to a war that is a strategic catastrophe for Russia would never have been made.

In recent decades, the Russians have tried to keep Ukraine in their sphere of influence by dangling carrots: reciprocal supply chains established in the Soviet era, common historical-cultural roots, and the project of the Eurasian Union, “an essential component of Great Europe … from Lisbon to Vladivostok,” as Putin wrote in October 2011. Had it joined, Ukraine “could have integrated into Europe more quickly and from a stronger position.” In other words: Alone, Ukraine would have been treated poorly, but together with Russia, it would be received with the honors due a great power.

Except—and this is the crux of the matter—Russia is not a great power. By 2014, its GDP had collapsed, dragged by a steep fall in gas and oil prices, only to return to the level of ten years earlier in 2020. For Ukrainians, choosing a modest Russian loan over an association agreement with the European Union no longer made sense (if it ever had); when pro-Russian president Viktor Yanukovych chose the Russian loan, it triggered the Maidan revolt.

Moscow responded by pulling out the stick: annexing the Crimea and creating two puppet republics carved into the old Soviet Rust Belt, the Donbass. It does not take great skills of psychological penetration to understand that Russia had lost whatever sympathy it still enjoyed in Ukraine, and why the new regime in Kyiv would seek economic, political, and military protection elsewhere. It does not take great psychological penetration skills to understand why Ukraine preferred to forge an agreement with an economic bloc (the U.S., the EU, and the U.K.)) with a combined GDP of almost $40 trillion (in 2020) over doing so with Russia, with its GDP of just $1.5 trillion (a little less than South Korea, a little more than Spain).

The United States has a vested interest in the continuation of this war, possibly at low intensity. But the Russian war on Ukraine will not solve America’s problems.

From a geopolitical point of view, Russia is stuck in a vicious circle: In order to develop economically, it must recover its imperial dimension; but, in order to succeed in that, it has to spend resources that it does not have.

To play in a bigger league, Russia generally bluffs, giving the rest of the world an impression of power. When it succeeds, it is not only thanks to disproportionate military strength and elusive diplomacy, but also because its rivals almost never ask to see what cards it’s holding.

In the days preceding the invasion of Ukraine, massive military mobilization and deliberately misleading communication seemed to portend success: Russia was again, overwhelmingly, at the center of the world—feared and flattered. The control of Crimea and of the two puppet republics seemed likely to be recognized (de facto, even if not de jure). Finally, NATO, strongly divided, would most likely have accepted (more likely without saying it) the outcome to lighten its presence at the borders of the former USSR.

All analysts then skeptical about the possibility of a Russian attack (including the present author) were led by this simple observation: If Russia invades, it risks not only losing what it has, in actuality, already obtained, but much more. But obviously, Moscow wanted more: to regain control of all of Ukraine. It goes without saying that the unconditional surrender of Ukraine could not be obtained at the negotiating table; not even the two NATO countries (France and Germany) most open to Moscow’s needs would have allowed it. Military action thus became the only possible recourse.

But this time, as happens at the poker table, when you have very little or nothing in your hand, you lose your entire stake.

With the invasion, Moscow achieved a long series of results opposite to what it had, at least in words, set for itself: It created a stronger national cohesion in Ukraine, losing most of its residual support among the Russian-speaking population. It reunified and reinvigorated NATO, labelled as “brain dead” by Emmanuel Macron a couple of years ago, increasing the alliance’s popularity throughout Europe, and prompting Finland and Sweden to want to join. The Russian war caused a surge in NATO’s military presence on the borders of the former USSR; allowed Germany to accelerate its rearmament; stimulated the opening of a debate on nuclear weapons in Japan; alienated many in China, Iran, and India (even if the Chinese, Iranians, and Indians cannot say it openly); alarmed Turkey; and was heavily condemned by the U.N. General Assembly (141 in favor, 4 against, and 35 abstentions).

Last but not least, Russia showed the world its embarrassing military paucity. It devalued all the bluff of armaments, the alleged backbone of the illusory Russian power.

All these consequences make the United States the real, and only, winner of this war, at least at the current stage of the conflict in early May.

Thanks to the war in Ukraine,  the United States suddenly regained international influence that had been fading for decades: forcing France to put its dreams of “European independence” back in the icebox; obtaining increased military commitment from allies that Americans have sought for years; acquiring valuable new allies on the Baltic front; improving relations with Turkey after two decades of coldness; increasing the importance of the U.S. on the Pacific front and East Asia in general; and being able to exploit new frictions between rivals, including the Chinese, Iranians, and Russians.

China’s leaders are unhappy not only because the Russians proved unreliable (they have always known this), but because of the soaring prices of raw materials and because, as good investors, they need stability and order. And if it is true that Putin, in his visit to Xi Jinping for the Winter Olympics, really failed to warn him of what was to come, then China’s resentment of Russia is multiplying.  Moreover, if the common tactical objective of Moscow and Beijing is the weakening of the United States, this war is instead strengthening it.

And, in Tehran, Iran’s leaders are unhappy because the war has blocked the signing of a new nuclear deal, which Iran desperately needs.

The United States has a vested interest in the continuation of this war, possibly at low intensity. But the Russian war on Ukraine will not solve America’s problems. The war cannot suddenly or definitively reverse the erosion of American influence, after decades of relative decline.

China will not give up its strategic goals, nor will Europe: The unity of the anti-Russian front on the Continent strictly depends what happens in Ukraine, and therefore is provisional. Electoral victories of Russia’s friends Victor Orbán in Hungary and Aleksandar Vučić in Serbia indicate that their populations were not upset by the invasion of Ukraine.

In France, lines of communication with Russia have never been interrupted, and if Paris found a pretext to reactivate its traditional strategy of attention toward Moscow, Italy and Greece would fall into line, and Germany would be forced to choose between the U.S. on one hand and Europe (and gas) on the other.

And in the wake of success, the U.S. runs the risk that it, too, may overplay its hand. By continuing  to bully China and India, it can only reconsolidate the now loosened ties between these two countries and Russia.

Worse still: Many in Washington, blinded by ideology, fail to understand how strategically precious Russia is for American foreign policy. A weak but intact Russia can divide Europe in useful ways, as during the Cold War, and serve as a counterweight to China. But many in Washington still think of Russia as the “evil empire,” deserving to be wiped once and for all from the geopolitical map of the world. If such ideological and emotional considerations prevail over geopolitical calculations, the consequences for international relations will be disastrous for everyone. But it would be much worse for the United States, which has more power to lose than any other country.

For Russia or the United States or any other country, any attempt to make ideological and emotional aspirations prevail over the geopolitical calculation of constraints is a sure recipe for disaster.