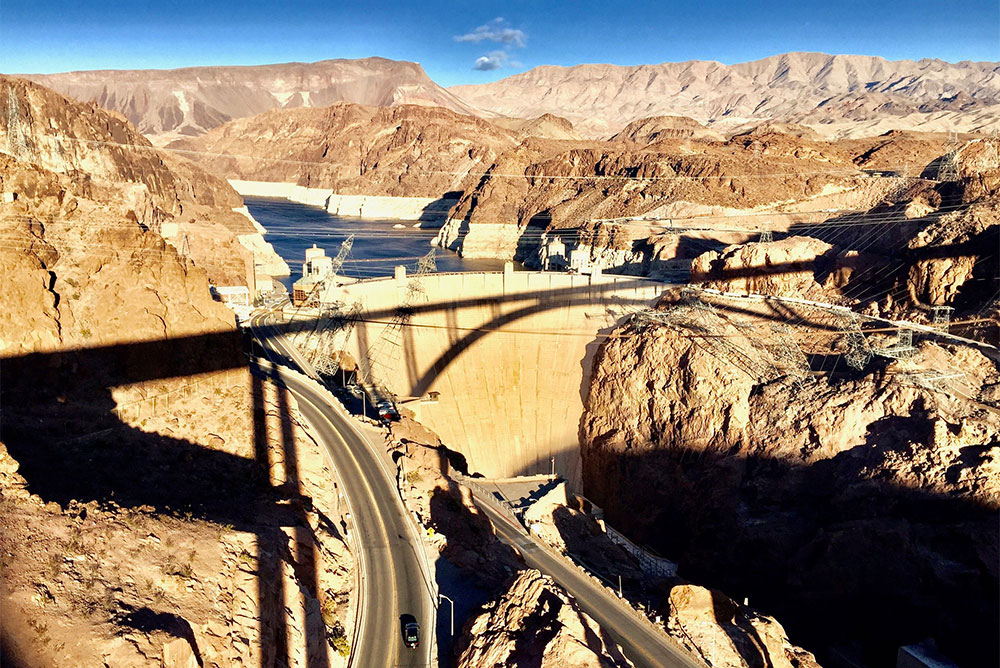 Electricity storage infrastructure is quietly transforming the rural U.S. West, writes Sayd Randle. The Los Angeles Department of Water and Power is flirting with the concept of a pumped hydro facility at the Hoover Dam. Public Domain. Courtesy of Warren LeMay/Flickr.


In the spring of 2019, residents of eastern California’s Owens Valley were on the fight. As is usual in that part of the world—where a century of aggressive water extraction by the Los Angeles Department of Water and Power has left the valley dry—they were angry about a water project dreamed up by some Southern Californians.

But this was a new kind of fight. Premium Energy Holdings LLC, a small, Walnut-based energy company, had filed for a preliminary federal permit to explore the development of an enormous pumped energy storage facility to be built in the mountainous terrain near Bishop for the benefit of Southern California utilities. The facility’s complex of dams, pipelines, and hydroelectric generation would have flooded sizeable sections of the John Muir Wilderness, destroying critical habitat of several endangered species and beloved recreational landscapes in the process.

After locals submitted scathing feedback during a mandated public comment period, Premium withdrew the federal application associated with the project. But in the three years since, the company has filed for preliminary federal permits for three similar, billion-dollar energy storage facilities in other remote sections of California. Additional pumped storage projects are moving forward near Joshua Tree National Park and in northern San Diego County. Meanwhile, other types of energy storage installations are also being developed across the state, such as compressed air storage facilities near Morro Bay and Rosamond and lithium-ion battery arrays in multiple desert locations. Beyond the state’s borders, the Los Angeles Department of Water and Power is flirting with the concept of a pumped hydro facility at the Hoover Dam, and Daybreak Power, a private energy developer, is pursuing federal permits to build the 3.6 billion dollar Navajo Energy Storage Station near Lake Powell, a pumped hydro installation that they envision providing electricity to markets in California, Arizona, and Nevada. And these are only a few of the projects currently underway. Electricity storage infrastructure is quietly transforming the rural U.S. West.

Pumped storage facilities consist of two (or more) reservoirs that are sited next to one another, but at substantially different elevations and connected by pumps and a hydroelectric generation facility. They depend on landscape, requiring steep grades, safe sites for reservoir development, and abundant water. When electricity is plentiful and inexpensive (such as around midday, when solar production is peaking), they pump water uphill, only to release it downhill through the hydroelectric generating station to produce power when the sun isn’t out.

The technology isn’t actually anything new. While companies such as Premium tend to frame their projects as cutting edge, several large-scale, utility-owned facilities have operated within and beyond California for decades. Because of their scale, however, the facilities are extremely expensive to develop and cumbersome to permit. These obstacles have meant that no new utility-scale facilities have come online in California since Pacific Gas & Electric’s Helms Power Plant, located east of Fresno in the Sierra Nevada, in 1984.

For rural communities, storage projects, despite their sustainable branding, are just more of an old pattern: abusing hinterland terrain to preserve urban consumption.

Why are they back on the table now? The new need for storage infrastructure is a side effect of California’s aggressive embrace of wind and solar electricity generation. Since 2002, the state’s Renewables Portfolio Standard (RPS), a policy geared at expanding clean electricity generating capacity via binding targets, has set continuously escalating renewable energy procurement requirements for its load-serving entities (the industry term for a utility). This transition accelerated in 2018, when the California legislature passed SB100, a bill requiring that 100% of the state’s electricity be produced by “zero emission energy sources” by 2045.

But renewable sources have a reliability problem: unlike fossil fuel sources, which can provide a constant stream of electricity, windmills and solar panels can’t produce when the wind doesn’t blow or the sun doesn’t shine. This means that the state needs on-demand, zero-emission electricity generating capacity—typically referred to as energy storage—to use during those times. It also means that this storage will only become more important for the state’s grid as renewable energy development increases.

To achieve this, the California Public Utility Commission (CPUC) has included electricity storage targets in the energy procurement orders it has issued in support of meeting the RPS, including dramatic increases in 2013 and 2021. So far, this has mainly resulted in a rapid expansion of lithium-ion battery storage facilities, usually connected to renewable energy generation sites. Many of these installations are concentrated amid the desert scrub of eastern Kern County and look like unexceptional clusters of smallish beige outhouses to the untrained eye.

But a detail of the 2021 procurement order has ensured that other technologies will be part of the new storage rush. The new target of 1000 MW of long-term electricity storage creates a need for facilities capable of holding the energy in reserve past the typical four-hour maximum of lithium-ion batteries—like pumped storage. So, with political will on their side, energy companies are rushing to permit possible pumped storage projects. (And though the RPS is specific to California, the storage rush isn’t: Arizona, Colorado, and Nevada also all have their own tax incentives in place designed to encourage the development of energy storage infrastructures.)

Cheerleaders tout these storage projects as essential to the transition from fossil fuel dependence to renewable energy. But—as the resistance from the residents of the Owens Valley shows—the installations can also bring serious negative impacts to local environments. In eastern Riverside County, for instance, locals have been fighting the Eagle Mountain Pumped Storage Project for thirty years, arguing that pumping desert groundwater to power the system will disrupt the fragile desert ecosystem, threatening its flora and fauna.

Given the urgent need for climate mitigation, it’s easy to cast local resistance to such projects as selfish NIMBYism. But many rural residents have already lived through the negative effects of extractive infrastructure on their home landscapes, and don’t want a repeat of those destructive experiences. While these pumped storage projects won’t spew much carbon, they would use enormous volumes of scarce water in ways that will desiccate some habitats and inundate others. Some of the projects also threaten homelands and sacred sites of Native communities, making them only the latest in long histories of violent dispossession. For rural communities, storage projects, despite their sustainable branding, are just more of an old pattern: abusing hinterland terrain to preserve urban consumption.

More difficult, but more equitable, would be to work to develop a grid that doesn’t treat rural areas as sacrifice zones. Incorporating more robust local consultation requirements into the permitting processes for utility-scale storage would help to halt or amend destructive projects. Prioritizing the development of smaller, more distributed renewable energy generation and storage infrastructures that can be sited within metropolitan areas will also help to redraw the lopsided geography of the state’s energy networks—and help city dwellers better understand the impact of their energy consumption. Such a fundamental reconsideration of the grid and its uses is intimidating, but necessary if we want the state’s pursuit of climate justice to be anything more than a branding exercise.