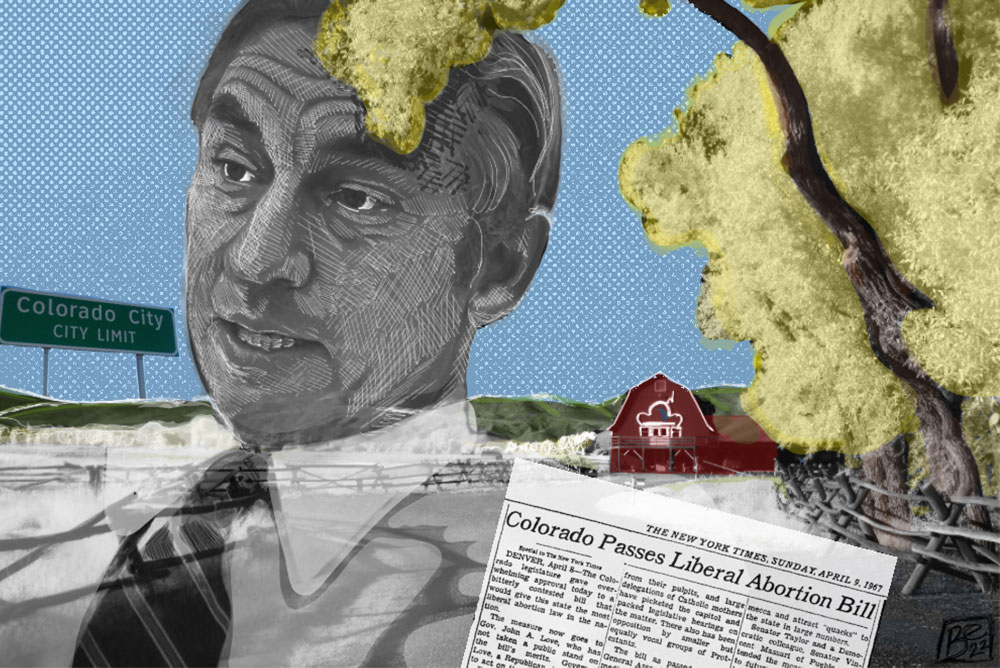 Abortion rights became an environmental issue in Colorado in the 1960s, attracting unlikely allies to the fight for reproductive freedom—including politicians like the author's grandfather. Illustration by Be Boggs.


In winter 1967, a young Democratic state representative named Richard Lamm introduced an abortion liberalization bill in Colorado’s House of Representatives. The bill passed quickly and moved onto the Senate, where it would be sponsored by a Republican, John Bermingham. The bill passed 20-13. Colorado became the first state to make abortion legal.

Bermingham was my maternal grandfather. I grew up six houses away from his red-brick duplex in Denver’s Cheesman Park neighborhood, and more than either of my parents, it was Grandfather who shaped my political sensibilities. (In a strange afterlife of frontier Victorianism, we grandchildren called him just that: “Grandfather.”) When I was a child, he took me to Wyoming to see the “real West,” and over dinner he would tell me about fracking and global warming. For the privilege of living in the West, he made it clear, we had to work tirelessly to protect its natural beauty.

That had been his trajectory, after all: In 1973, he resigned from the state legislature to become assistant to the governor for environmental affairs. In 1975, when Lamm became governor, he appointed Grandfather as the state Land Use Commissioner.

For years, I could not make sense of the fact that, though the through-line of his career was land use and environmentalism, the aspect of his career that has received the most attention over time was the liberalization of the state’s abortion laws. It didn’t seem to make sense in the context of the rest of his work.

What I eventually understood is that Grandfather supported abortion because, in the politics of his era, abortion became an environmental issue. In the 1960s, neo-Malthusian fears of population growth, poverty, famine, and communism spurred a politics of family planning. But in the postwar West, the visibility of environmental change made global population growth seem especially close at hand. Legislators like Lamm and Grandfather channeled their fears about overcrowding into support for family planning and the legalization of abortion, the need for which was being expressed by the more pro-woman, pro-bodily sovereignty factions led by doctors, mothers, clergy, and others.

In his book The Malthusian Moment, historian Thomas Robertson argues that the origins of the U.S. environmental movement lie not in Rachel Carson’s Silent Spring, but in a revival and reinvention of the ideas of Thomas Malthus. In 1798, Malthus, an English economist, published An Essay on the Principle of Population, a treatise whose argument is based on two “postulata”: first, that “food is necessary to the existence of man,” and second, that “the passion between the sexes is necessary and will remain nearly in its present state.” The second postulate suggested that population would always grow exponentially, while the first argued that hunger would keep that growth in check by sending the desperate “redundant population” into “misery and vice.”

In the postwar West, the visibility of environmental change made global population growth seem especially close at hand. Legislators like Lamm and Grandfather channeled their fears about overcrowding into support for family planning and the legalization of abortion.

Malthus’ arguments weren’t based in data: Demography didn’t exist in the 18th century. Instead, his theorizing was a response to the poor having become more visible. His text’s publication coincided with a wave of urbanization and slum creation that resulted from industrialization and enclosure, a practice that denied peasants access to common pastures and forests for hunting. Malthus took a problem of land distribution and reimagined it as a rule of biology.

Overpopulation wasn’t a concern for Malthus, since he believed that food shortage would keep population in check. But after World Wars I and II, conservation biologists mixed Malthus’ theories with the then-new concept of “carrying capacity,” which refers to the quantity of things that can be held in a given container. Historian of range science Nathan Sayre writes in a 2008 article that the concept originally arose in the mid-19th century as a way of describing cargo ship capacity. In the 1880s, range and wildlife managers began using it to indicate the number of a given species that could be supported by a given environment after observing elk-die offs on isolated plateaus. Then, in the 1940s, they suddenly began using the term to describe the limits of global human population—with “little or no empirical support,” as Sayre writes.

In 2016, I e-mailed Sayre’s article to Grandfather. He replied that he didn’t need to read it: “I’ve known about ‘carrying capacity’ ever since learning when I was still a small boy on our family’s ranch in Wyoming in the late ‘20s and ‘30s that it referred to the number of cattle that could be sustained on the tract of high mountain Forest Service land that we leased each summer without over-grazing it.” And as though the conceptual leap were perfectly straightforward, he attached a graph from the 1972 book Limits to Growth labeled “Overshoot and Collapse,” depicting human population growth surpassing Earth’s carrying capacity, collapsing due to depleted resources, and eventually stabilizing at a lower level.

Carrying capacity—a concept from the Western range —soon became an axiom in national politics. During the Cold War, fears that the modern-day poor would become communists brought population control into the political mainstream. From 1965 to 1968, the U.S. Senate held hearings on the supposed crisis. According to Robertson, federal funding for family planning programs in the developing world increased from $2.1 million to $131.7 million, and for domestic programs from $8.6 million to $56.3 million.

Simultaneously, postwar federal policies were facilitating suburban construction on an unprecedented scale. In the American West, these changes were especially visible, both because of the openness of the region’s landscapes and because federal investment in the region meant that it saw disproportionate growth: Denver’s population doubled between 1950 and 1970. Lands where elk had roamed were fast being bulldozed for subdivisions, threatening what Westerners cherished most about their region.

The region’s population growth politics were accordingly pronounced. After the swift passage of the abortion bill, Lamm introduced a bill in the state House in 1971 that would pay mothers receiving welfare an extra $50 for every three months that they did not get pregnant after having their first two children. “While this was not strictly coercive,” Jennifer Holland writes in her history of the Western anti-abortion movement, “the bill was terribly concerned with limiting certain ‘undesirable’ or burdensome groups from reproducing.” When I brought up these classist, often racialized overtones in early family planning policy with Grandfather, he got defensive and steered the topic in a different direction.

Historian Gillian Frank emphasized to me in a phone call that Zero Population Growth groups and environmental groups were “uneasy allies” in the abortion rights movement, playing second fiddle to those with a true abortion rights perspective, such as physicians, women’s activists, and some clergy. But in Colorado, these environmental politics of abortion were the vanguard.

Their importance quickly waned. Participating in legalizing abortion forced the male lawmakers who had scared themselves with statistics to learn about the needs and experiences of women with unwanted pregnancies in their communities, and to cede their mouthpiece to the more committed parties in the broad abortion legalization coalition. In Grandfather’s case, after participating in the abortion legislation, he changed his party affiliation from Republican to Democrat. And even if he wouldn’t speak directly about how his thinking had changed, he actively supported the work of abortion access organizations for the rest of his life, even though their missions had little to do with population and everything to do with health and bodily autonomy.

I think this is what this history can teach us today: that it is possible, and perhaps even necessary, for each of us to listen to the people an issue affects most, and to confront the deficiencies of our own politics. Coalitional work not only inspires political change, but also change within its participants.