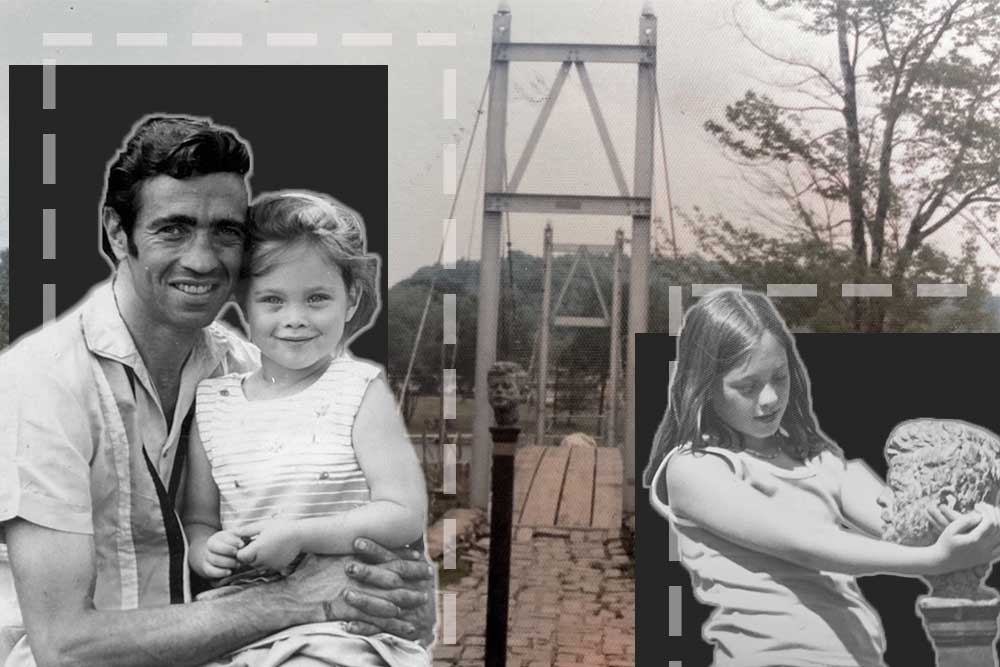 In the 1960s, elementary school teacher Norman Horowitz installed a JFK bust at his family's Camp Pontiac to remind campers of the good they could do for others. When the sculpture went missing, Horowitz's daughter Cindy Wenig mourned its loss. Then, 30 years later, after her father's death, it reappeared. " It was as though he’d felt my despair and unearthed the single most meaningful symbol of his character," she writes. Photos courtesy of author. Illustration by Zócalo.

In the 1960s, my father’s crowning achievement was building, entirely by hand, a 60-foot steel suspension bridge over the lake at Camp Pontiac, the summer camp his family owned in Copake, New York.

My dad, Norman Horowitz, had no engineering training, just a love for the beauty and symmetry of bridges. Using an old World War I Army Manual, steel from the local junkyard, and cobblestones he foraged near his home in the Bronx, he spent four years building the bridge. When it was finished, it connected the camp’s main campus with the manmade “Animal Island,” which, back in the day, housed a petting zoo. 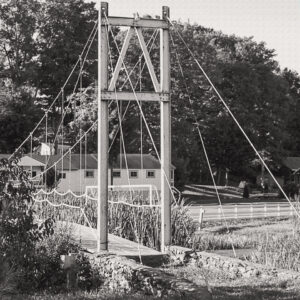 The bridge that the author’s father built at Camp Pontiac. Photo by Janice Benjamin.

My dad, whose favorite book was Profiles in Courage, dedicated his bridge to the late President John F. Kennedy, installing at its foot a podium with a bust of JFK that was a replica of the famous Robert Berks sculpture at the Kennedy Center. JFK’s inaugural words, “Ask not what your country can do for you, ask what you can do for your country,” captured the public service spirit my dad wanted the children of Camp Pontiac to live by. The Kennedy bust became a literal touchstone for generations of campers, who paused to pat the head—and, my dad liked to believe, to think of others—when crossing the bridge.

My dad was an elementary school teacher in the Bronx. The middle of three boys, he was handsome with blue eyes and thick, jet-black hair. He was also shy, probably due to being severely asthmatic as a child. Camp Pontiac was his favorite place, both as a teenager—he was 15 when his father bought the camp in 1945—and as an adult, when he and his brothers inherited it. I spent summers at Camp Pontiac, often passing my dad, who’d smile and wave, usually busy fixing something, his clothes and hands too dirty to hug me. I was proud to be Norman’s daughter.

My father’s life goals were simple: to take care of and educate his family, and the children entrusted to his care at school and camp. He supported my every pursuit, from academics to theater—and also cheered on every other young person, including my college and law school friends, who crossed his path. My dad and I were so close he picked out my wedding dress—without me present—when my punishing hours as a young attorney left me without any spare time.

The Kennedy bust became a literal touchstone for generations of campers, who paused to pat the head—and, my dad liked to believe, to think of others—when crossing the bridge.

Sometime in the 1980s, when I was in my 20s and after my father had sold his share of the camp, we learned that the JFK head had mysteriously disappeared. I saw how the news disturbed my dad, even in his stoic, quiet way. I made it my secret mission to find the statue, knowing how much it meant to him. I visited the auction houses around Copake, where my father used to take me as a child, thinking maybe the thief would try to sell the bust. Decades passed. I took to searching on eBay. The bust was still lost when my father died in 2016, at age 86. I kept looking, wanting to find the statue for myself, as a memory of my dad.

Around the beginning of the pandemic, I saw a post on the Camp Pontiac Alumni Facebook page, written by a woman who’d been a camp counselor in the 1980s. She reminisced about a silly prank, lightheartedly describing how the JFK head had been stashed in a camper’s luggage trunk. My stomach dropped. As others chuckled about the “funny” antic, I seethed with rage.

I privately messaged the woman who’d written the post, who apologized and took the story down. I called my sister and my cousins to vent. As the night wore on, my rage settled into a profound sadness. I missed my hardworking, noble father more than ever. I talked to him out loud. I went into the room in my house where he’d stayed during his final months, sat on his bed, and cried bitterly. After decades of looking, I finally realized that the statue was irretrievably gone—and with this came a larger reckoning I hadn’t wanted to face: so was my father.

The next day, something inexplicable happened. My cousin Janice, who’d moved back to Copake, walked to camp to take a picture of my father’s suspension bridge, thinking it might cheer me up. Instead, she texted me a picture of the JFK head, lying on its side on a stone slab.

I was driving, and swerved to the side of the road. “Huh? Is that an old picture? I’m confused,” I texted back.

It wasn’t an old picture. My father’s brother Eddie took off in his golf cart to retrieve the head. Amazingly, the bust was perfectly intact, with the post where my dad had mounted it still attached.

We all thought that whomever had been in possession of the head saw the Facebook posts, felt guilty, and furtively returned it during the night. But as details came together, the truth was more remarkable: The camp site manager had been crossing my father’s suspension bridge when his dog started digging at something. Buried deep in the dirt, with only the post poking out, was the JFK head. With no knowledge of the statue’s history, the manager brushed it off and set it on a nearby stone slab. Not long after he left, my cousin walked over and discovered it. 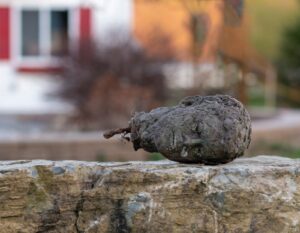 The JFK bust with the spindle sticking out lying on the stone. Courtesy of author.

It had been over 30 years since the JFK bust had gone missing. The day after I raged in sadness over what seemed its permanent loss, the statue had, magically, appeared. My father was a strong-willed man, but I never expected to get a message from him after he died. It was as though he’d felt my despair and unearthed the single most meaningful symbol of his character.

The bust, on a new mount, now sits in my home in California, and every day I am astounded to see it there. Recently, to mark what would’ve been my dad’s 90th birthday, I posted on social media about the statue’s reappearance. Comments from Camp Pontiac alumni poured in.

“I was but a little kid, some 60 years ago when I watched your dad build that remarkable suspension bridge,” wrote Ronald J. Krowne, a camper in the 1960s. “It symbolized so much to us … & the JFK bust was the crowning anchor of it all.” Robin Bernstein, a camper throughout the ‘70s, wrote that the statue “reminded us of the larger world around us and of doing what we can to make the world a better place.”

This summer marks the 100th anniversary of the founding of Camp Pontiac. In celebration, the current owners have revamped the camp logo—it will now be the image of my dad’s suspension bridge.