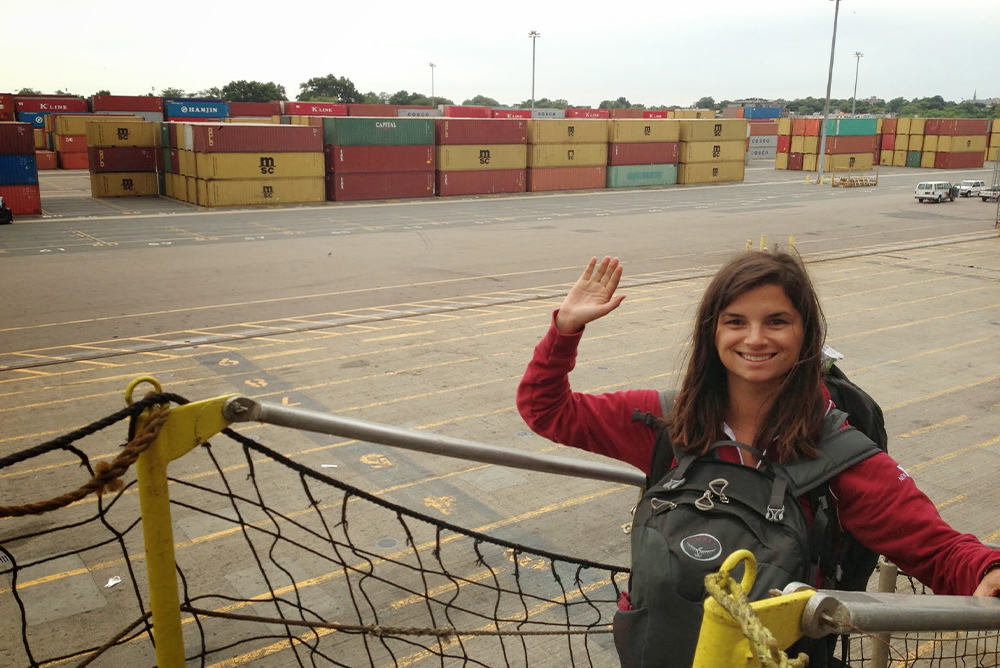 Elena Legeros on the gangway of the MSC Uganda in the Port of Boston at the end of her trip, in August 2013. The author's journey provided time and space for self-discovery. Courtesy of author.

The flat sea glimmers like a disco ball and it’s warm enough to sit outside without a puffy coat. All day long there have been whale sightings. … WHALES! The watchmen called me in the gymnasium where I was playing ping pong with Ian and Cloyd, crewmembers from the Philippines. WHALES! Each time I’d race to starboard or port side and scan the sea, squinting for a splash of a fin or tail. Finally this evening I saw the whales on port side, basking in the warm, peach light of the sunset. We saw two that floated like black logs along the calm surface. And another on the starboard side, the perfect outline of a tail descending into the deep.

In 2013, I quit my publishing job in New York City to travel around the world as a passenger on container ships. My trip was generously supported by a fellowship from my college for recent graduates who demonstrated a “strong desire to travel and a deep love of beauty.” I planned to talk to crews, communities, and organizations involved in maritime shipping, and to raise awareness of the industry’s rising social and environmental impact. In truth, my motives were far more selfish. I was in awe of container ships, and drawn to the unpredictability of the ocean. I was also compelled to do something a little reckless, just for me. Mostly I wanted to be far away.

I had been living two separate lives for some time. In my hometown of Seattle, I was a mostly closeted version of myself, so as not to bring any embarrassment or discomfort to my devout Greek Orthodox family. In New York, there was another version of me, figuring out who I was and what I wanted out of an adult romantic relationship, and on the verge of falling in love with a woman. I hoped that time on a big, slow-moving boat might give me space to reimagine how I would navigate the future. 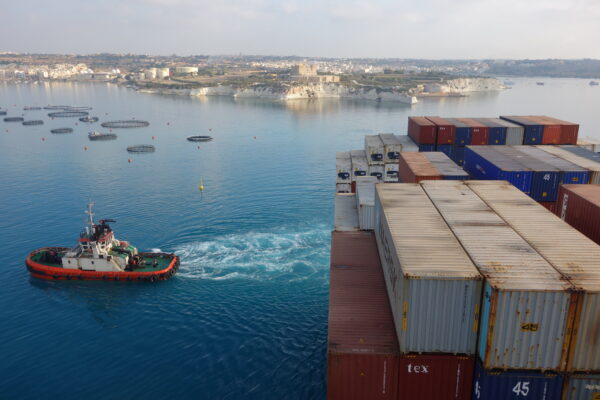 A view of Marsaxlokk Port, Malta. During her journey, the author often walked around the ship, past rows of multicolored containers. Courtesy of author.

It is 12:25 in the morning and I am waiting in an empty business center in Port Klang. It’s a cement box of a building with scuffed walls, cold metal chairs and tiny television sets playing American westerns. … I’m not certain I am where I’m supposed to be. Hopefully my ship will arrive in the next hour and I can begin the immigration process and board the boat before sunrise. Earlier in the day I was told it would be here at 8 p.m., and then later, 11 p.m. When I arrived at 11 p.m., I was told the boat would not be here until 1 a.m.

As a passenger on a container ship, you are the least of anyone’s concern—insignificant in comparison to the millions of dollars’ worth of cargo on board. There is a lot of time for quiet reflection—with no cell service and only intermittent access to email. Days are punctuated by mealtimes but are otherwise entirely free of programming. On the ship I had a surprisingly spacious cabin with a double bed, desk, loveseat, and coffee table, my own bathroom, and one porthole looking out over the containers. I spent my mornings reading on the couch or writing diary entries at my desk. Sometimes I took a break to climb the several stairs to the bridge, where officers and crew take turns manning the ship, to stare out at the sea or pester whoever was on watch with questions.

In the afternoons I could walk around the perimeter of the ship, past the rows and rows of multicolored containers, a half-mile distance around. After lunch, I often slept. Some afternoons I ran on the ancient treadmill in the “gymnasium,” a small room with some athletic contraptions from the ‘80s. Or I’d play ping pong with any off-duty crewmembers.

The officers were from the countries where the ships were flagged—in the case of this trip, France and Germany. The crew were mostly from the Philippines, but there were others from Romania, Russia, and Kiribati, an island I had never heard of. All of the officers and crew that I met were men.

Even thousands of miles away from everyone I knew, with the entire space of the ocean and the anonymity of an experience unshared, I was still building a wall. I had the courage to do so much alone, and yet even alone I didn’t have the courage to be me.

There is one other passenger on board, Victor from Sweden. It’s so cute because no one has really introduced themselves to us, but nearly everyone we’ve passed lets us know that there is a barbeque on deck tonight. They are roasting a whole pig and there will be tiger prawns and merguez sausages as well! This will be the last barbeque for a while because we will be passing around India and it is the monsoon season. I think they are going all out for the occasion. Every day the menu is posted on a printout taped in the stairwell to the mess hall. And every day someone pastes up a different photo of a scantily clad female celebrity between lunch and dinner. Day 1: Cameron Diaz. Day 2: Christina Aguilera. Ironically, the steward also includes on the printout the name of the saint who is celebrated each day.

Before my trips I had assumed I would be one of few women, if not the only woman, on board. I was careful in my dress not to invite any unwanted attention. And when asked, I avoided all conversation around my personal and romantic life—I certainly never revealed that I was dating a woman. One day I was playing ping pong with one of the officers, and he asked me why I never wore skirts—then jokingly threatened to steal all my trousers while I exercised so that I’d have to wear a skirt to dinner.

In some ways, the journey amplified my inclination to hide and my growing frustration with the disconnect between how I presented myself to people of my past, and to strangers, and who I really was. Even thousands of miles away from everyone I knew, with the entire space of the ocean and the anonymity of an experience unshared, I was still building a wall. I had the courage to do so much alone, and yet even alone I didn’t have the courage to be me.

One remarkable day—the day we sailed through the Suez Canal in the first hazy blue light of dawn—the beauty of the experience was punctuated by an email from my family. They were planning a wedding for my sister, a big fat Greek wedding, and I just couldn’t be happy. I was mourning the love and support I feared I would never receive from my parents, and felt guilty for my lack of joy for a sister I loved so much. Waves of anger and jealousy and anxiety swelled up so strong that I felt sick to my stomach. That day, I vowed not to be the same when I returned. 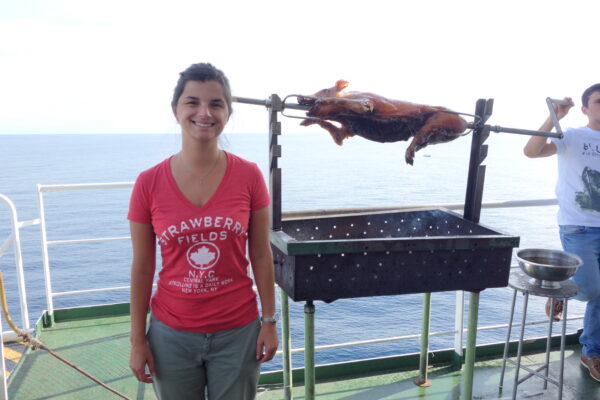 Elena Legeros aboard the CC Rigoletto on the Straits of Malacca, during a barbecue on deck with the ship’s crew. Courtesy of author.

Today will be my last day aboard and it could not be a more glorious day. There isn’t a breath of wind and the sea is a shimmer like static on a deep blue TV screen. We are ahead of schedule and at midday we came to a complete halt in the middle of the ocean and I went outside to suntan, taking dips in the pool of icy seawater. Every time I go outside I sniff to see if I can smell the smell of the Cape. My phone is getting intermittent service and I can hear the Boston-based coast guard over the radio in the wheelhouse.

It’s been nine years since my voyage. In that time I’ve moved from New York to Seattle to Los Angeles to San Francisco. I married the woman I love, and we’ve had two children together. We recently decided to move our family to Long Beach, where we rented an apartment that looks out over the Ports of Los Angeles and Long Beach, the two largest ports in the United States. Long Beach drew us for a variety of reasons, but I was excited to be so close to the container ships.

These days I feel rooted on land and glad to be close to my family—the one I grew up with and the one I’m building. I don’t feel the pull to venture far away, but I love to see the ships in the harbor, to think about where they came from and where they’re going. Sometimes I check online to see what they’re carrying and the route they’ve taken. I think about the officers and crewmembers on board and how long they’ve been away from their families. I’m reminded of my smallness, both relative to the size of these ships and the expanse of the world they sail. But I’m reminded of strength, too: the strength I found in the middle of the ocean, not in the face of any danger or adversity but with the space and time to discover it fully.