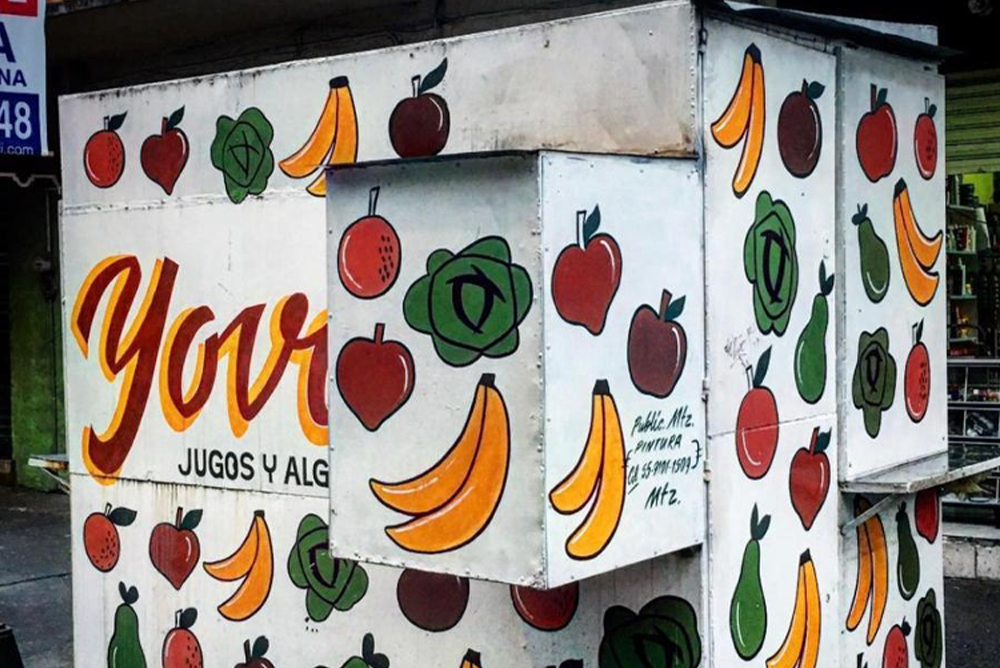 Rótulos—the hand-painted signs decorating street vendors’ kiosks—are an integral aspect of Mexico City's urban life and part of Mexico's folk art tradition, but are under threat because the city's government wants merchants to comply with their vision of "cleanliness." Courtesy of author.


This April, the government of Mexico City’s central Cuauhtémoc alcaldía, or borough, mandated that all its rótulos—the hand-painted signs decorating street vendors’ kiosks—be erased. The colorful optical illusions, diverse typographies, and fantastical portraits of sandwiches, juices, and smoothies that have become an essential aspect of the city’s built environment had to be washed off or painted over, making the kiosks nothing more than a backdrop for the alcaldía’s sad, gray-and-white official seal. 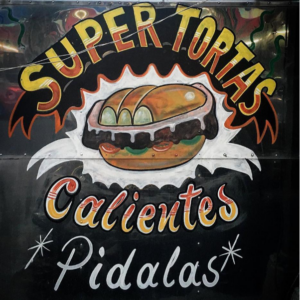 The kiosks, which are ubiquitous on Mexico City’s sidewalks and public squares, are small metal stands with panels that open to create shade for the clients during the day, and then fold down and lock at night to create a closed, secure box. The rule to homogenize them came as part of the Jornada Integral de Mejoramiento del Entorno Urbano, or Comprehensive Program to Improve the Urban Environment, which counts among its objectives ensuring that “merchants on public streets maintain a clean workspace at all times.” Sandra Cuevas, the borough mayor, has said that the program will “enable everyone to coexist in peace and harmony” and that “the cleanliness and beauty of the borough is a task shared by all.” Apparently, despite the fact that rótulos have long been of interest to academics and museums as part of Mexico’s folk art tradition, the administration considers the hand-painted graphics to be at odds with their vision of “cleanliness”—and a threat to coexisting in peace and harmony.

This isn’t the first time that Mexico City’s government has implemented measures to control images on its streets and public squares, and that the arbitrary motivations for doing so have caused systematic losses of artistic expression and of craftspeoples’ jobs. In the early 1940s, for example, the city government prohibited murals on the walls of pulquerías, establishments dedicated to the consumption of pulque, a milk-like alcoholic beverage made from the fermented sap of agave plants. The murals, staples at pulquerías throughout the city, combined text with images: The humorous names of the bars appeared in huge lettering next to landscapes, figures of dancers and mariachis, or depictions of agave plants.

While the city considered the murals an eyesore, others thought differently. The pulquería walls “were places where Mexican folk artists made important murals,” celebrated painter and architect Juan O’Gorman said in his 1973 biography, and rules banning them were “in effect a government regulation to eliminate one of the most important forms of artistic expression in Mexico.” Writing in the magazine Mexican Folkways in 1926, Diego Rivera criticized the city’s bourgeoisie for considering the murals “one of the principal shames of Mexico,” and seeking to erase them. Like O’Gorman, Rivera saw the murals as markers of tradition and predecessors of his revolutionary, popular art. American photographer Edward Weston’s images of the murals have been collected by the MOMA and the Center for Creative Photography.

Rótulos, the kiosks’ brightly painted signs, are an integral part of our experience of urban life. They are bridges between clients and vendors that create empathy and affection. They make the city’s public spaces friendlier and more human, reminding us that graphic design and advertising beyond corporations is possible.

Later, Ernesto P. Uruchurtu, who served as chief of the Federal District (the equivalent of the mayor before Mexico City was incorporated as a city-state in 2016) from 1952-1966, made it his mission to squeeze neon signs out of the city. Uruchurtu hated neon signs because he often saw them near brothels and cantinas, which offended his sense of morality. So from the start of his term, he denied permits for new ones. And in 1971, the government of Octavio Sentíes Gómez decided to make signage in the Historic Center district uniform, allowing only black and white lettering in the district’s marquees and shop windows, formerly filled with vivid colors. Like the rótulos, all old signs had to be taken down, no matter their age or artistic quality.

Now, Cuevas is going after street vendors’ kiosks, which have outlasted those previous efforts to homogenize the city. This mandate is at odds with the priorities of most of the residents of the borough. Despite how much space the kiosks take up on the city’s sidewalks, despite how hard they can make it to navigate our neighborhoods, they are part of our lives. Many of us chilangos, or residents of Mexico City, are loyal clients of specific stands, and have relationships with the merchants. 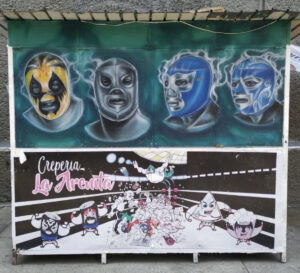 A sign for “La Arenita” creperie featuring luchadores and a wrestling ring. Courtesy of author.

Rótulos, the kiosks’ brightly painted signs, are an integral part of our experience of urban life. They are bridges between clients and vendors that create empathy and affection. They make the city’s public spaces friendlier and more human, reminding us that graphic design and advertising beyond corporations is possible. (Interestingly, the borough isn’t covering up signs painted with the logos of newspapers or commercial brands. For some reason, officials feel the generic graphic design that has invaded neighborhoods along with voracious gentrification—Coca-Cola logos and the like—is worth conserving.)

Rótulos are also a draw for tourists, and the subject of academic investigations. They show up in art publications and exhibitions. The exhibition Sensacional de Diseño Mexicano, which collected artistic advertisements from small businesses in Mexico, traveled to 12 galleries around the world, for instance, and its catalog has become the fundamental text on folk advertising not only in Mexico, but all over the Western Hemisphere. And anyone familiar with current trends in Mexican graphic design or contemporary art knows how often high culture draws on the visual language of the rotulistas. In contemporary artist Francis Alÿs’ “Sign Painting Project,” for instance, Alÿs partnered with three rotulistas to create paintings that appropriate rótulos’ visual language for works sold on the global art market.

In the weeks since the mandate was put into place, residents of the Cuauhtémoc have shared photos of the borough’s rótulos on social media. These celebrations of the intricate, inventive, painted designs keep multiplying—demonstrations of dissatisfaction with the borough government’s attack on our local folk art. And through the posts, we’ve begun organizing to create an archive of rótulos—to save them, even if only in our memories. We are calling it the Chilango Network for the Defense of Folk Art and Design (Red Chilanga en Defensa del Arte y la Gráfica Popular, or RECHIDA, which also means “very cool” in Mexico City slang), on Instagram at @re.chida.

The Cuauhtémoc borough’s decision accelerates the loss of an artistic trade and a form of folk art that was already at risk. It adds to a trend of Mexico City’s public space becoming more bland, less user-friendly, and less attractive for everyone—local or foreign. The capital has already lost many of the traditions that once made it special: the Easter tradition of burning cardboard effigies of Judas in neighborhood plazas, the vendors who sold balloons decorated by hand, the pulquería murals whose erasure O’Gorman lamented.

All over the world, the intangible heritage of public space has been destroyed in favor of a generic appearance. Unique and eclectic playgrounds, benches, pavements, forms of advertising, and even trees have been displaced for a limited catalog of prefabricated objects designed for an ideal public sphere that in reality does not exist, anywhere in the world. Eliminating rótulos doesn’t only insult the artists who painted them and de-personalize street kiosks. It also deprives everyone of the right to a city that integrates all those who live there and who make it function: the rotulista and those who enjoy his work, the sandwich-maker and those who eat his food. With the elimination of its rótulos, Mexico City does not look more like Paris or London. It simply looks like a sadder, more generic version of itself.