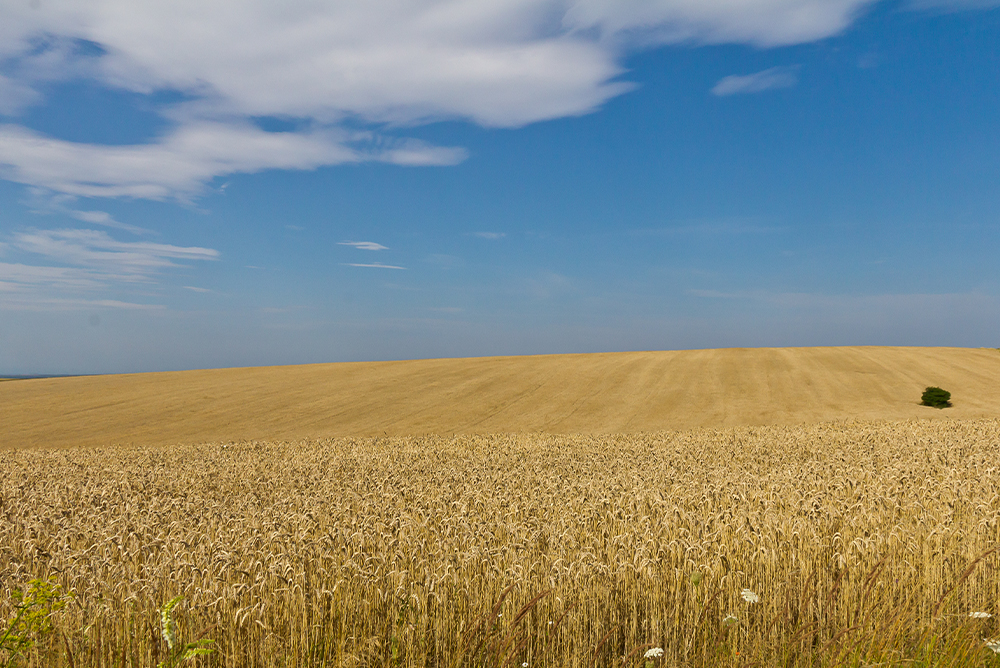 A global food crisis is in the making as the Russian blockade of Ukraine's Black Sea ports prevents Ukrainian wheat from being shipped overseas. Courtesy of Raimond Spekking/Wikimedia Commons.

Russia and Ukraine control about 11.2 percent of the world’s arable land, and supply 28 percent of its exported wheat. A substantial portion the world’s most fertile wheatfields lie along the two nations’ borderlands south and east of Kiev, stretching to the Black Sea. Since Russia invaded Ukraine in February, most of those croplands have become battlefields.

It is unknown exactly how much productive capacity for wheat has been damaged since the war began, but the situation is dire. The Statistics Service of Ukraine estimates that roughly 40 percent of Ukraine’s cropland may not be planted this year, resulting in a 54 percent decrease from 2021 wheat production levels—an amount of lost wheat equivalent to that consumed by 151 million people in an average year. With U.S. wheat yields also expected to drop 15 percent this year because of drought, the world faces food shortages on a global scale. Much of humanity, including food insecure nations, relies on Ukrainian and Russian wheat. Without it, millions may go hungry—and wartime politics and international relations could suffer a destabilizing jolt.

Images of wheat are stamped on currencies and engraved upon temples. Our oldest stories equate wheat with salvation, and with life itself. And wheat is ubiquitous in conflict. Armies have often targeted wheat storage for capture and destruction. Control of wheat protects allies and coerces opponents. Modern history shows us wheat’s central role in large-scale human conflict and evinces the enormity of the global disaster unfolding in Ukraine.

During the Industrial Revolution of the 18th and 19th centuries, increased efficiencies in transportation enabled countries to produce specialized goods and generate surpluses to facilitate trade, laying the foundation for our current global system. Between 1868 and 1902, as the internal combustion engine mechanized food harvesting and processing and powered faster trucks, ships and trains, the cost of wheat shipments dropped 75 percent. It became economically feasible to move wheat from the U.S. to Britain, or from Odessa to Britain. What had been a local commodity began to become part of an interconnected international system. This interconnectedness is further illustrated by the fact that most of the wheat grown in Kansas and throughout the Great Plains today shares a common genetic heritage with Russian and Ukrainian wheat. For example, the prolific Turkey Red varieties were first introduced to the U.S. in 1874 by immigrants from the Volga River region of Russia.

But while efficient transportation created more interconnections between different commodity markets and enabled international trade, it also created new vulnerabilities in economic warfare. Wheat was crucial in World War I and World War II. In both conflicts, combatants, struggling to feed their populations and starve their adversaries, sought control of rich agricultural areas in and around Ukraine. World War I revealed the fragility of nascent global supply chains for grain. In 1914, over 90 percent of the world’s wheat was exported from only seven countries: Argentina, Australia, Canada, India, Romania, Russia, and the United States. Net wheat importers such as Britain proved vulnerable; for example, prices in the United Kingdom rose by about 60 percent during the war, leading to severe rationing and bread riots.

Any war between Russia and Ukraine is a war over critical nutritional resources for humanity. Bread is life.

Wheat exports from Russia, Romania, and what is now Ukraine, were disrupted when Turkey entered the war at the beginning of November 1914 and closed the narrow Turkish straits. Meanwhile, drought reduced Australia’s and Canada’s wheat crops, and Argentina exported 10 percent less wheat than the previous year as well. India embargoed exports to reduce prices for its internal market. U.S. grain, reinforced by hardy Russian wheat strains, remained plentiful—but prices, buffeted by fluctuating growing conditions and wartime chaos, were unstable from 1915 through 1921.

Price variability and blockades caused human suffering and negatively affected war efforts. Historically, when nations are at war, their populations and their armies require higher calories—thus the old Napoleon-attributed aphorism: “an army marches on its stomach.” Even populations that were not directly involved in conflict were affected by price increases as food became scarce and unaffordable, which led to malnutrition and social upheaval.

World War II was marked by greater stability in wheat and other staple grain production, as nations implemented lessons of the earlier conflict by reinforcing supply lines and stockpiling what wheat they produced. But this was easier for the Allied powers—which included major wheat producers the United States, the Soviet Union, and Romania—than for smaller wheat-producing Axis powers. In particular, Germany and Japan shared a concern about producing enough food for their large urban populations. Thus, wheat became an objective and a weapon of war.

Sometime around 1940, German SS-Obergruppenführer leader Herbert Backe convinced Adolf Hitler to try to divert Ukrainian grain flows from Soviet cities to Germany in what was known as “The Hunger Plan,” to sustain the Third Reich and impose death by starvation on 30 million Soviets. By 1942, Germans consumed more than 7 million tons of Ukrainian grain and tens of thousands of Ukrainians and Russians starved.

Global wheat prices doubled from February 1941 through the end of the war. And by 1948, as Ukraine and Russia contended with failed crops and poor transport infrastructure, prices doubled again leading to malnutrition within Europe and other countries, experiences that drove many governments, including the Soviet Union, to prioritize national food production in the later part of the century.

After the collapse of the Soviet Union in 1992, Russia pursued a policy of strategic self-sufficiency and surpluses large enough to support the global market for wheat and other critical staples like sunflower seed and oil, rapeseed, and corn. Despite economic sanctions, Russia is still poised to be the world’s top wheat exporter in 2022 and 2023.

Like earlier conflicts, today’s war in Ukraine has enormous potential to disrupt economies and lives not only within the region but beyond. The United Nations and World Food Programme is warning that food insecurity has worsened in the past year for 193 million people across more than 20 countries—of these, Afghanistan, Ethiopia, Nigeria, Somalia, South Sudan, and Yemen require urgent humanitarian interventions to avoid starvation and death.

Low-income countries are most affected by tightened wheat supply and price volatility since they will have to increase the proportion of income they expend on food. If governments subsidize food purchases, then precious resources will be diverted from other investments like healthcare, sanitation, and education.

Impacts from upended harvests and exports are staggered, and until detailed damage assessments of Ukrainian infrastructure can be performed, predicting the damage to wheat exports will be difficult. Logistical challenges could conceivably outlast the war. One reason for Ukrainian and Russian dominance over wheat exports is their farms’ proximity to the Black Sea and global shipping routes. But critical food transport systems are under attack. Ukraine’s Mariupol port has been destroyed, and other ports are occupied, or under blockade. With Russia closing off access to the Black Sea, Ukraine wheat exports may face bottlenecks on other transportation routes.

In anticipation of global wheat shortages, governments around the world are spurring their farmers to plant more acreage to replace missing Black Sea grains. In the United States and Australia farmers may plant more winter wheat than usual. Kazakhstan, Central Asia’s breadbasket, announced temporary export quotas on wheat grain and flour of 1 million metric tons and 300,000 metric tons, respectively. And India, the world’s second largest wheat producer after China, announced it will withhold its wheat exports this year, about 900,000 metric tons, to meet domestic food security demands. With wheat harvest scheduled to begin in July in Ukraine, the ability to effectively store that crop along with other crops harvested in September and October is critical. Without proper storage, wheat will spoil, further reducing food availability.

While questions abound, this is certain: Any war between Russia and Ukraine is a war over critical nutritional resources for humanity. Bread is life.