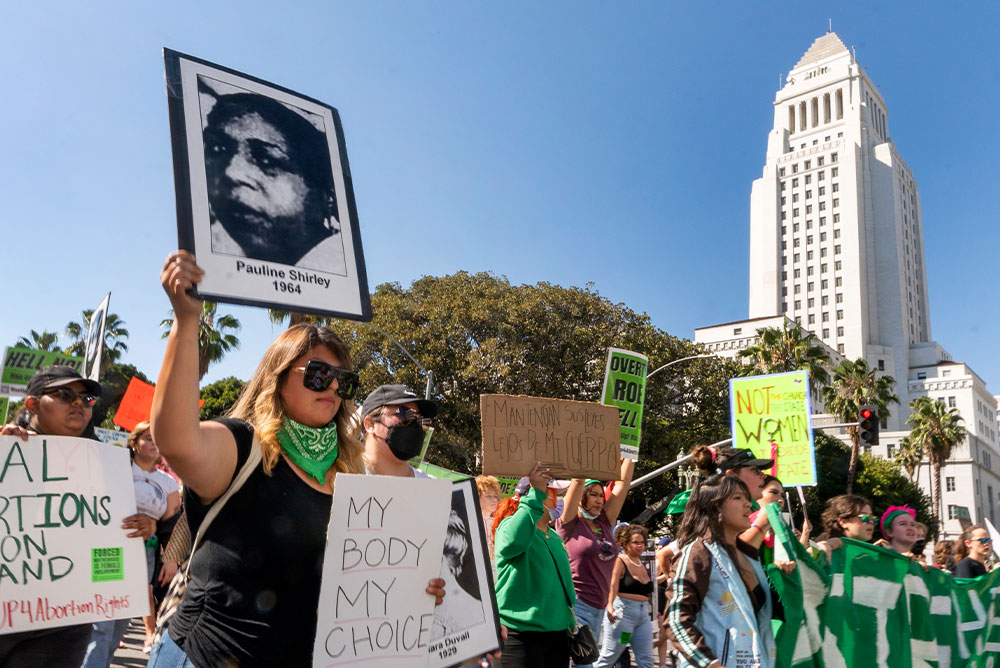 People protest near City Hall in downtown Los Angeles after the U.S. Supreme Court released its decisions regarding Roe v. Wade. With this recent slate of decisions regarding abortion, gun rights, and the environment, columnist Joe Mathews argues that America may be pushing California to leave the nation. Courtesy of AP Images.

To encourage us to think about the unthinkable, the Bulletin of the Atomic Scientists sets a Doomsday Clock, showing how close humanity is (in metaphorical minutes and seconds) to the “midnight” of the apocalypse (nuclear or otherwise) and human extinction.

California may now need its own Independence Clock, showing how close we are to that seemingly unthinkable moment when our state departs the U.S., to become an independent nation.

First, justices overturned more than a century of legal precedent that had allowed communities in California to limit public gun possession—endangering laws that have spared us from some of the American epidemic of gun deaths by murder, suicide, and accident.

Then, the court reversed Roe v. Wade and eliminated the federal constitutional right to abortion—a right enshrined in our state constitution and supported by majorities of Californians of every political party, region, and demographic group.

These decisions were like earthquakes—unsettling but unsurprising, given the justices’ frequent expressions of contempt for California in oral arguments (a bias I wrote about last year). They were enacted by a far-right court majority that exists because America’s anti-democratic constitution gives less representation and less voting power to Californians, both in choosing a president (who nominates justices) and in electing a Senate (which confirms them).

The two decisions follow a fusillade of recent federal failings that have damaged California and harmed our people. These include a pandemic response that cost nearly 100,000 Californian lives; a generation-long “war on terror” that killed more soldiers from California than from any other state;  attacks on our efforts to end the drug war and police abuses; attempts to cancel our environmental laws; denial and delay of disaster aid; accusations that our elections are fraudulent; and the violation of the rights of our immigrants and their families.

Departing the union seems beyond the pale. But so is the behavior of the American government. That’s why, as fanciful as a break-up of the country might still sound, the Independence Clock is ticking closer to midnight.

To cope, California has had to behave more like a separate nation than a state. We have adopted our own immigration policy. We have signed our own environmental treaties with other countries (agreements that are even more important now that the Supreme Court has limited the federal government’s ability to regulate climate change). We have funded our own research on subjects from guns to stem cells (in response to federal restrictions on such research). And we have successfully pressured car makers and other corporations to privilege our state regulations over national ones, just to name a few.

But creating a quasi-nation creates costs that are hard on Californians. We weren’t designed to operate as an island. How much more can a state handle, governmentally, economically, emotionally?

The Supreme Court made clear last week that we can expect no respite in the future.

I say this not just because the court, for the first time, cancelled a constitutional right in the abortion case, or because Clarence Thomas, in his concurrence, declared that the courts should cancel the rights to contraception and same-sex marriage. I say this because the court’s method of decision-making does not account for Californians’ lives or preferences.

Both the guns and abortion decisions rely on peculiar readings of history—focused on American and English practices of the 18th, 17th, and earlier centuries, generations before women’s suffrage, before the end of slavery, before California was even a state. The decisions employ a mode of historical analogy that lacks the rigor of palm reading, much less serious legal analysis.

The troubles will persist beyond this court, which, with the retirement of Stephen Breyer, no longer has a single Californian among its justices. Given our disenfranchisement, what is to stop a future Congress and president from cancelling our abortion laws, our protections for women or gay people or minorities or immigrants, our climate and environmental laws, or even our commitment to making it easier for our people to vote?

As an optimist, I’ve previously argued that democratic reforms in California and elsewhere could solve this American crisis. With more and better participatory tools—from citizens assemblies to proportional representation to national referenda—the U.S. could re-found itself as a modern democracy. But the open hostility to democracy of this court, and among much of the American political elite, suggests that any such reforms do not stand a chance.

Departing the union seems beyond the pale. But so is the behavior of the American government. That’s why, as fanciful as a break-up of the country might still sound, the Independence Clock is ticking closer to midnight.

Polling from last year showed growing support, among Americans of all political persuasions, for removing their own state from the U.S. A University of Virginia poll found 41 percent support among Biden voters and 52 percent support among Trump voters for blue or red states seceding to form their own separate nations. A Bright Line Watch poll found that 47 percent of Democrats in West Coast states favor forming their own nation.

Is it time for California to go? Probably not. But it’s not too early to pack a bag and make a departure plan. We badly need an open and ongoing statewide conversation, including major media and our elected leaders, about independence.

The day after Roe v. Wade fell, I found myself coaching in a youth sports tournament, which starts every game with the Pledge of Allegiance. I stood and put my hand over my heart, but found that I could no longer bring myself to recite the words.