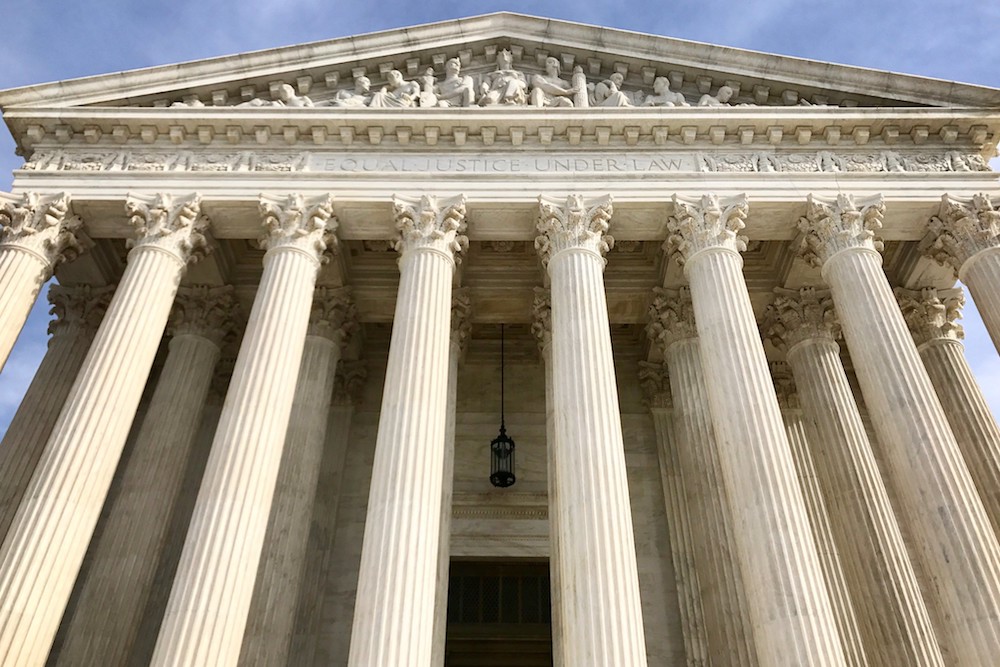 The Golden State should strike back at justices who won't treat us fairly. Courtesy of Ron Coleman/flickr CC BY-NC 2.0.

Maybe the U.S. Supreme Court should recuse itself from cases involving the Golden State.

Because the current court, with a 6-3 conservative majority reinforced by new associate justice Amy Coney Barrett, isn’t even bothering to disguise its anti-California biases anymore.

That was the unmistakable message from recent Supreme Court oral arguments on a challenge by conservative foundations to a California rule requiring non-profits to disclose their major donors.

For the record, it’s perfectly understandable in these polarized times for Republican-appointed judges to be skeptical of a state as Democratic as ours. And it’s reasonable to have doubts about many of the laws and rules produced by California’s confounding governing system, including the rule in dispute in this case.

But the ways the justices treated California—coming on the heels of recent anti-California decisions in cases involving churches and COVID-19 restrictions (like Harvest Rock Church v. Newsom)—raise real questions about whether this Court can give our state a fair shake.

It wasn’t just the way the justices seemed to assume bad faith on California’s part. It wasn’t only the sarcasm in Justice Samuel Alito’s voice as he repeated California’s claims in the case at two different points. Nor was it just the way that Justice Brett Kavanaugh, whose confirmation hearing will be remembered for the sexual assault accusations he faced from a California professor, suggested that California’s rule was suspect because 46 other states don’t have similar rules.

It was the decision by Barrett—in an insult to notions of fair play—to participate in the case at all. She should have recused herself, because the foundation suing California—the Koch family-sponsored Americans For Prosperity—donated at least $1 million just last year to the effort to install her on the court in the final days of the Trump administration. Kavanaugh and Justice Neil Gorsuch, whose own confirmations earlier in the Trump administration also were backed by Americans for Prosperity, should have recused themselves, as well.

Instead, all three participated in oral arguments and made it plain that they would vote against California in favor of the foundation that helped secure their appointments to the bench.

Barrett ignored public calls by senators and legal ethicists to explain her refusal to recuse herself.

Perhaps judges not giving California a fair shake doesn’t sound that bad to you. After all, anti-California bias is a socially acceptable prejudice in the United States, and our state has earned its national reputation for nuttiness. Americans have long celebrated a constitutional system that discriminates against California and other large states—by giving us too little representation in the Senate, and making our votes worth less in presidential elections. We’ve also learned to live with the frightening power of federal judges, who have life tenure and essentially can’t be removed from office, because judges police themselves.

But that does not mean that Californians must accept open bias by the highest court in the land. It’s long past time for this state to—directly and personally—challenge powerful American jurists who won’t treat us fairly.

It’s long past time for this state to—directly and personally—challenge powerful American jurists who won’t treat us fairly.

In recent years, California has suffered intemperate criticism from Supreme Court justices that raise questions about whether our state is treated fairly. The most notable circumstance came in 2015, when Justice Antonin Scalia wrote that “California does not count” as a real American or Western place in a dissent against a historic decision guaranteeing marriage equality.

Another odious example came last year. With COVID deaths rising here, Alito had the gall to give a partisan political speech in which he criticized California’s pandemic restrictions. The justice, who had signed onto the 2018 decision defending the Muslim ban, also ludicrously claimed that our state—long a national leader in conceiving and protecting new forms of religions and sacred practice—was somehow biased against religious liberty. Alito made these political statements even as the court considered cases on the pandemic rules and religious liberty, but did not disqualify himself from hearing them.

Instead, once Barrett joined the court last fall, the court began overturning California’s pandemic restrictions on indoor gatherings as an infringement on religious freedom because they apply to churches. On one Friday night in February, the Supreme Court justices—none of whom is a public health expert—issued an emergency order that froze California’s pandemic restrictions on indoor religious services. On another Friday night three weeks later, the Court did the same thing when it struck down a similar restriction in Santa Clara County.

The orders were unsigned, and came without so much as an opinion explaining the decision. These are chilling deviations from due process, which requires the court to hear arguments and issue decisions. Apparently, the state of California, and its people, no longer are guaranteed to get a hearing at the U.S. Supreme Court.

The only thing worse than the court’s anti-California rulings without opinions are its rulings with opinions. In a case involving pandemic restrictions on a church in my hometown of Pasadena (which still won’t hold the Rose Parade on a Sunday), Gorsuch, a proud appointee of President Trump, appealed to hackneyed stereotypes of Californians as godless, disingenuously writing: “If Hollywood may host a studio audience or film a singing competition while not a single soul may enter California’s churches, synagogues, and mosques, something has gone seriously awry.” In his performative piety, Gorsuch failed to note that Hollywood productions had complied with COVID safety measures, while the church in question was defying them at the risk of public health.

Barrett, in the same case, doubled down on Gorsuch’s appeal to anti-California prejudice, writing: “If a chorister can sing in a Hollywood studio but not in her church, California’s regulations cannot be viewed as neutral.” But Barrett’s misrepresentation of California was even more galling, since her very own rushed appointment to the court was celebrated with a super-spreader event at Trump’s White House. A reasonable Californian might wonder about the justice’s own soul.

While it’s typically not wise to pick fights with the Supreme Court, California ought to make an exception for this dishonorable Supreme Court. Our politicians should hold Congressional hearings into conflicts of interest on the Supreme Court, and investigate the blatantly biased refusals of Barrett, Gorsuch, and Kavanaugh to recuse in the case involving their donor, including calling the justices to testify. California also should back broader reforms of the court, including the addition of more justices.

And we should insist that some of those additional justices be Californians. For starters, our Congressional representatives must demand that if Stephen Breyer, the court’s only Californian (he’s a San Francisco kid who went to Lowell High and Stanford), retires this spring as is rumored, his replacement must be a Californian. The principle here is clear. If nine judges are going to govern our country, at least one of them should be from the state that one out of every eight Americans call home.

As for the current justices, here’s a warning: Respect for the law is foundational, but respect for judges is conditional. If you persist in open bias against our state, don’t be surprised if citizens defy your rulings, seek to remove you from the bench, or change forever the court on which you sit.