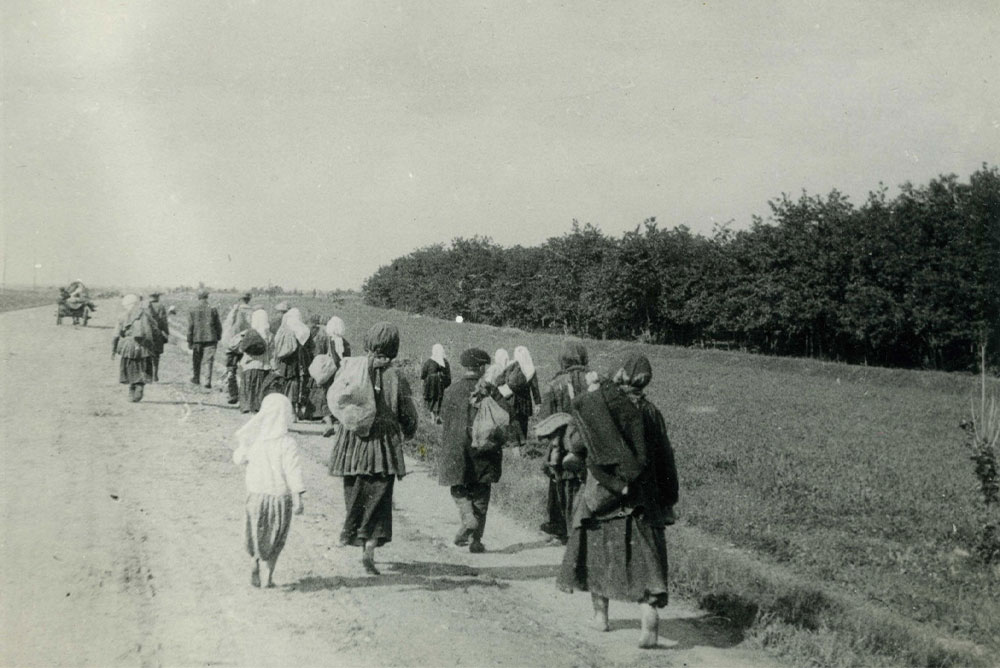 Hungry Ukrainian peasants in search of food during the Holodomor, also known as “hunger-death,” a man-made famine remembered in modern Ukraine as a genocide. The event marked a turning point for the author's grandfather, Boris Bibikov. Photo by Alexander Wienerberger. Courtesy of Diocesan Archive of Vienna (Diözesanarchiv Wien)/BA Innitzer.


This is the first of two essays exploring the intertwined histories of Russia and Ukraine, told through one family’s history. Read the second essay here.

We like to believe that we think with our rational minds. But a little bit of us, a deep bit, thinks with our blood. When I think and write about Ukraine, I cannot ignore my deep family connection to that country’s history.

My mother Lyudmila Bibikova was born in Kharkov, a Russian-speaking industrial city in northern Ukraine, in 1934. Her father, Boris Bibikov, was born in Simferopol, Crimea and her mother, Marfa Scherbak, in Poltava in Western Ukraine.

Yet the Bibikov family did not consider themselves Ukrainian. Quite the contrary. For two centuries the Bibikovs played a significant role in Russia’s imperial rule over Ukraine, first as servants of the tsars and later as lieutenants of Soviet power.

The connection is not a comfortable one. Whether I like it or not, my family story—my blood—is intimately linked to the history of the Russian Empire.

The name “Ukraine” means “by the edge” or “border land.” The territory has always been a marcher country, a frontier. Today it is where the Eastern Slavic, Orthodox world meets the Western, Catholic one. Two centuries ago, it was where the Russian Empire met the Muslim world of the Ottoman Turks. The modern Russian state was formed not in Moscow or St. Petersburg but on the margins of empire. Ukraine is where Russia’s history has always turned, suddenly and repeatedly, on its heel.

Kiev was a thriving city when Moscow was still an uninhabited swamp. The Viking pagan Prince Waldemar of Kiev—known to Russians as Vladimir, to the Ukrainians as Volodymyr— baptized his entire people into Christianity in 988, consecrating the first Christian eastern Slavic state. In 1707 at Poltava, on the plains of Western Ukraine, Peter the Great defeated the Swedish king Christian XII, exalting Russia to the status of a fully-fledged European empire, with a new capital on the Baltic and a toehold on the Black Sea. It was Catherine the Great who brought Ukraine under Russian rule. The conquered lands came to be known as Novorossiya, or New Russia.

The New Russia was very different from the old one. Quite literally, Ukrainians did not speak the same language as their new fellow countrymen. Ukrainian is as different from Russian as German is from Dutch—similar, but mutually incomprehensible. The Russia of the tsars was a society of slaves and slave owners, whereas Ukraine was one of freeholding yeomen farmers, where serfdom was rare. The Black Sea port of Odessa—founded by Catherine the Great’s greatest general and secret husband Prince Grigory Potemkin—was a cosmopolitan entrepôt. The valley of the Don in eastern Ukraine became a land of industry, as enterprising Welsh mining engineers dug out coal to power Russia’s tardy industrial revolution.

Novorossiya was not an extension of the old Russia. It was old Russia’s window onto Europe, and modernity.

It is with my grandfather, Boris Bibikov, that my family’s involvement with Ukraine comes into sharp, personal focus.

My family’s connection with Ukraine began during the reign of Catherine the Great with Captain—later, General—Alexander Alexandrovich Bibikov, son of the commander-in-chief of the Imperial Russian Army. In 1783, the young Alexander accompanied the empress through the newly conquered lands of south and west Ukraine and Crimea. He would have seen the great lands then as fertile, empty prairie, ripe for settlement by his countrymen. The valley of the Don River, later known as Donbas, would soon become the Russian Empire’s Wild West, as Catherine’s functionaries encouraged thousands of Russian-speaking settlers to move there to farm and to work in the coal mines. These settlers maintained their separate identity, establishing the roots of the region’s current conflict.

The Bibikovs, in the meantime, became a leading family of Russian ascendancy on its frontier—the sort of elite Mikhail Bulgakov described in his 1925 novel The White Guard. “Kiev,” he wrote, “was a Russian island in a sea of Ukrainian life, of which the well-born inhabitants knew nothing.” Alexander Bibikov’s great grandson served as Governor-General of Kiev in the 1830s and 40s, ruthlessly enforcing Tsar Nicholas I’s cruel restrictions on Jews. Kiev’s main thoroughfare was named General Bibikov Boulevard, for a time. Another Bibikov fought the British and French at the siege of Sevastopol in the Crimean War of 1853-56. The defeat in Crimea evinced the inability of the old feudal Russia to function in a modern world—another turning point for the Russian Empire that pivoted in Ukraine. Within five years Russia abolished serfdom, liberating 23 million people from chattel slavery. (By comparison, four million African Americans were enslaved on the eve of the Emancipation Proclamation.)

It is with my grandfather, Boris Bibikov, that my family’s involvement with Ukraine comes into sharp, personal focus. The Bibikov family remained prominent nobles in 1902, when Boris was born—but he became a passionate communist, and the latest member of the clan to try to impose the Kremlin’s imperial vision on this unruly borderland. Boris was one of the builders of the Kharkov Tractor Factory, a centerpiece of Joseph Stalin’s first five-year plan to bring Soviet agriculture into the 20th century. Boris, in his turn, saw the giant fields of Ukraine and his great new factory as anvils for hammering out a new kind of society. The tractors Boris built would free millions from the drudgery, ignorance, drink, and viciousness of village life. The land would become a “grain factory,” in Vladimir Lenin’s phrase, for great cities and a new civilization. Work in these factories would turn backward peasants into honest proletarians.

The steppeland of Novorossiya, plowed and sown, had become the breadbasket of the Russian Empire, and the people who worked these lands had prospered alongside powerful, mostly Jewish grain trader clans in Odessa. As free-holding landowners, Ukraine’s peasants became wealthier and more independent-minded than their Russian counterparts. During the civil war that followed the Bolshevik revolution of 1917, Ukraine emerged as a hotbed of anti-communist resistance.

Under the tsars, Jews and Ukrainian intellectuals who tried to revive Ukraine’s language and non-Russian culture had been considered suspect. So it was again under the Bolsheviks, who saw Ukrainian nationalism as an existential threat to the Soviet project. Stalin’s solution to the problem was a systematic campaign of “Russification.” He invested in coal- and steel-producing areas of the Donbas to create a proletarian and, crucially, Russian-speaking heartland. And he set about crushing Ukrainian nationalism and the people most likely to support it, Ukraine’s stubbornly independent and capitalist-minded peasantry.

Ukraine became the scene of Stalin’s most horrific crime—the Holodomor, or “hunger-death,” a man-made famine remembered in modern Ukraine as a national genocide akin to the Holocaust. Between four and seven million Ukrainian peasants starved to death after Stalin confiscated their land, grain, and livestock in 1929, in the name of setting up collective farms.

“There was such inhuman, unimaginable misery, such a terrible disaster, that it began to seem almost abstract, it would not fit within the bounds of consciousness,” Boris Pasternak wrote after a trip to the Ukraine at the time. The young Hungarian communist Arthur Koestler found the “enormous land wrapped in silence.”

As children starved, the Soviet state sold Ukrainian grain abroad to buy machinery to fuel its crash industrialization. And Boris Bibikov, my grandfather, was at the forefront. He married a peasant girl from Poltava. He wore striped Army shirts and played the bluff proletarian. As the Party and Kharkov factory boss, he edited the factory newspaper and organized “storm nights,” accompanied by brass band, where workers scrambled to meet brutal Kremlin deadlines. “Lads, lets meet the Plan!,” he scrawled in chalk, on the lavatory walls. He wrote editorials in Izvestia and garnered praise in Pravda. For his work, he received the Order of Lenin, the highest Soviet honor.

But as the Holodomor unfolded, even Boris rebelled. He attended the 17th Party Congress—the so-called “Congress of Victors”—in Moscow in 1934, backing Sergei Kirov, Stalin’s main rival and an advocate for slowing the pace of collectivization. The Congress marked the last time opposition to Stalin was voiced in public. Kirov was assassinated in December 1934. When Boris heard the news, his daughter Lenina recalled, he threw himself on the sofa and wept. “We are lost,” my grandfather said. He was right.

Of the 1,277 Congress delegates, over 800 who spoke against Stalin died in Stalin’s Great Purge of the Party in 1937.

Boris Bibikov was one of them.