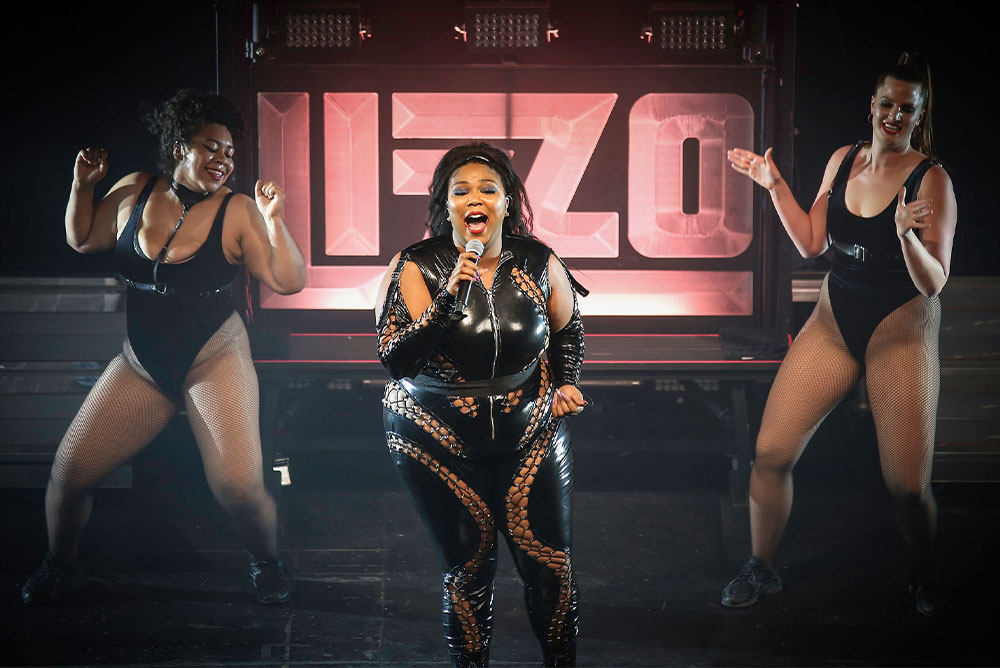 Lizzo performing at the Palace Theatre in St. Paul, Minnesota. The pop artist’s “About Damn Time” is the latest in a long line of social dances that tell a history of body autonomy and regulation in America, argues columnist Jackie Mansky. Courtesy of Andy Witchger/Flickr.

In what already feels like a different year—but was really just a few weeks ago—Reese Witherspoon, Selena Gomez, and just about every single person on the internet was posting a video of themselves trying to do the Lizzo “About Damn Time” dance, first credited to TikTok personality Jaeden Gomez.

Lizzo has a lightning-in-the-bottle talent for capturing catharsis in a song, and the moves to this early summer anthem—clap your hands three times to the words “About! Damn! Time!”—are pure fun, even if you’re bungling the choreo, or for that matter, the slipperiest of the song’s lyrics (as the pop star reminds us, the shoes she’s singing about? It’s “Balenci-ussies, not Balenci-encies”).

There was a point where the internet was saturated by these dance challenge numbers. But in the last few days, just as the algorithm seems to have moved on, I’ve found myself actively seeking them out. It’s not just the welcome playfulness these homemade performances offer. Watching them is also a reminder of the power this form of group movement holds.

I’m thinking specifically about an early 20th-century analog of these viral routines that swept through America before World War I.

Whether it was the grizzly bear, the bunny hug, the camel walk, or the chicken strut, so-called “animal dances,” set to ragtime tunes, called on you to do exactly what you’d expect: move your body around like a wild thing.

Notable for encouraging improvisation and unblushing sexuality, the dance style ushered in a new way of movement for a new generation, and helped young women, especially, claim agency over their bodies.

The origins of the ragtime dance movement are somewhat murky, but San Francisco is often part of the tale. In The Wicked Waltz and Other Scandalous Dances, author and choreographer Mark Knowles credits Johnny Peters, an African American professional dancer, with being one of the first to bring these dances (also known by other names like tough dancing, new dancing, and half-time dancing) from the South to the Bay.

A century later, the animal dance craze—and the issues it raises around body autonomy and regulation—is part of the legacy of social dancing that continues to this day, embodied now through these viral dance challenges like the one to ‘About Damn Time.’

The dance was quickly embraced by “factory girls”—young, city-dwelling, working-class women—who flocked to dance halls, after long underpaid hours on the job, to let off steam by drinking, dancing, and enjoying themselves. Progressive social reformers seeking to regulate these dance halls to “save” these women from themselves naturally bristled at these newfound animal dances, which they viewed as “plain hugging set to music.”

“We urge the importance of recognizing the distinction between legitimate dancing and this hideous perversion,” wrote New York social reformer Belle Linder Israels in a 1911 article, “[G]enerally speaking, [it] is not dancing at all but a series of indecent antics to the accompaniment of music.”

By 1912, New York City had placed the grizzly bear, one of the most popular of the dances, and other “huggly-wiggly” numbers under the sanction of a social ban. Cities across the nation followed with their own attempts to regulate the ragtime dances that had cropped up in regional styles. To offer perspective on just how much of a cultural threat the craze had become, President Woodrow Wilson reportedly canceled his inaugural ball because he worried it would promote “indulgence in the turkey trot, the bunny hug and other ragtime dances and thus provoke what might amount to a National scandal.” 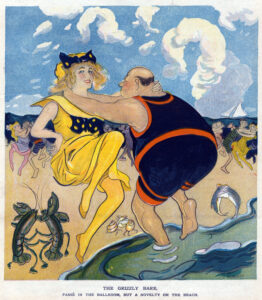 “Passé in the ballroom, but a novelty on the beach,” reads the caption to this July 10, 1912 Puck magazine cover art titled the “grizzly bare,” which riffs on the popular animal-style dance, the grizzly bear. Courtesy of Keppler & Schwarzman/Library of Congress Prints and Photographs Division.

Alongside moralistic fears that young women would fall to ruin by dancing these steps, the attack on ragtime-era dancing was also a direct assault on race mixing. In Everybody’s Doin’ It: Sex, Music, and Dance in New York, 1840-1917, musicologist Dale Cockrell details how Black and white working class people in New York “commonly drank together, danced together, and lived and loved together.” Which is why government officials and reformers targeted places like dance halls where races “could mix and mingle and where interracial sex was available.”

But even removed from dance halls, the grizzly bear and other ragtime-era dances were considered an existential threat to whiteness. As dance scholar Danielle Robinson explains, ragtime dance’s “animation of the whole body through a loosening of the torso and freeing of the limbs” was understood to have come from African American culture. The movement was all about “change, difference, discontinuity, and disruption,” Robinson continues, which is why so many tried to shut it down.

The crusade against animal dancing can be seen as a clear attempt to regulate young people’s choices on matters affecting their bodies—how they moved and whom they chose to move with. This held true not just for working-class people but also the “smart society” set who wanted to dance ragtime dances at swanky parties, like the one at the Hotel Astor in 1912, where the fashionable young people were informed: “Should there be any of you who have an inclination to dance the ‘grizzly bear,’ the ‘turkey trot,’ or an exaggerated form of the ‘Boston dip,’ the members of the Floor Committee will stop you.” When a New York Times reporter present asked for a reason, the host’s response was clipped: the dances were “vulgar.”

A century later, the animal dance craze—and the issues it raises around body autonomy and regulation—is part of the legacy of social dancing that continues to this day, embodied now through these viral dance challenges like the one to “About Damn Time.”

Imitation and synchronized movement taps “into the deep-seated psychology of how we connect,” writes ethnomusicologist Niall Edwards-FitzSimons on the science around why humans respond so powerfully to social or group dancing. But while Edwards-FitzSimons’ research explores how such connections can be fostered online through a technological platform like TikTok, his observation that “these dancers are separated through time and space, but they create solidarity and positive feeling by moving together” can also easily make that stretch across history as well.

One of my favorite details about the grizzly bear is that while doing the dance, people would all cry out, “It’s a bear!” For someone stepping out of convention on a turn-of-the-20th-century dance hall floor, I like to imagine this non-sequitur offered a moment of levity and an emotional release, the same that a teen today might channel as they move their body about to Lizzo, screaming “It’s about damn time!”