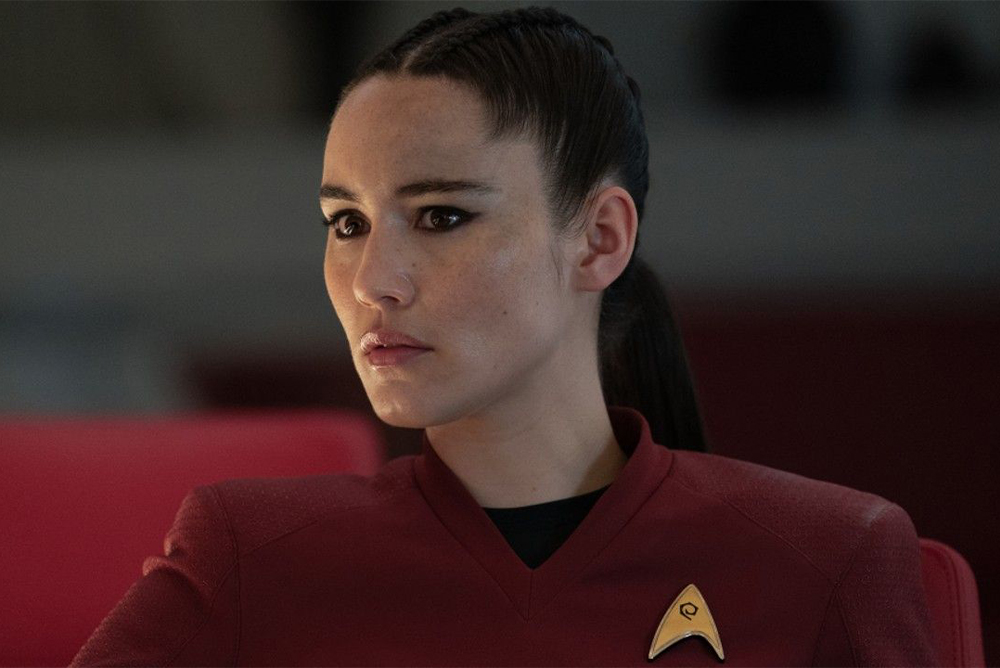 In a meme that’s been floating around online recently, William Shatner asks, “When did Star Trek get all political?”

The joke is on Shatner, or rather on an old tweet from the actor, who is best known for playing Captain James Tiberius Kirk in the original series. Considering that Star Trek has never not been political, responses to the meme have predictably flooded social media. (The best being “1966”—the year Star Trek debuted.)

Today, there is more Star Trek on air than ever before, courtesy of streaming service Paramount+. Amid this renaissance, the franchise, at its best, continues to serve as an arena for political thought, mining the events of the past and present to imagine what the future could look like. I’ve been especially interested to watch how several plotlines have lately been converging around eugenics, suggesting how heavily the subject will weigh over the future of modern Trek.

The debunked theory of eugenics gained widespread attention and influence in the first half of the 20th century until Nazi Germany’s passion for it made it politically nonviable. Nevertheless, today it still influences policy and thought around the world—including here in the U.S., where the dangerous legacy of the American eugenics movement remains embedded in the national discourse. But eugenic themes were long pushed off the screen and out of the public eye following a silent-era film debacle.

Back in the early 1900s, the eugenics movement was ubiquitous in American popular culture. State fairs hosted “better baby contests” that rewarded the healthiest and strongest (white) offspring. Op-eds pushed for doctor-approved marriage licenses in the name of “public health.” And traveling lecture tours warned of the dangers of children inheriting the supposed “weaknesses” of their parents, under the rationale that “inferior types” were a biological threat to the future.

All of this was reflected in movie plotlines of the day. But while dramas like Heredity (1912) and The Inherited Sin (1915) promoted eugenics ideals, progressive comedies like Wood B. Wedd and the Microbes (1914) and The Eugenic Boy (1914) pushed back, critiquing and debunking the movement. “Eugenics was an intrinsic part of early movie culture,” literary scholar Karen A. Keely argues in “Scientific Selection on the Silver Screen,” noting that film studios and directors in the silent era often “used their medium to argue the merits and deficits of eugenic theories and policies.”

After World War II, when the full extent of the horrors of Hitler’s Third Reich were revealed to the world, the eugenics movement lost momentum. But its influence continued on—the U.S. sanctioned mass institutionalization and forced sterilization policies onward into the 1970s.

Then came the 1916 silent film The Black Stork.

It was a plot ripped, literally, from the headlines, starring Chicago surgeon Harry J. Haiselden as himself. Historian Martin Pernick’s excellent 1996 book The Black Stork, which resurfaced the eponymous film and Haiselden from obscurity, recounts the story. In 1915, Pernick writes, Haiselden advised the mother of a baby born with deformities to forego necessary surgery and let the newborn die, lest it grow up with lifelong health conditions. After the so-called Bollinger Baby’s death, Haiselden called a press conference to announce what he had done—and would do again—for the genetic “well-being” of the nation. To Haiselden, the choice not to operate on the baby was part of the “Greater Surgery”—“the surgery that cuts away the vileness and decay and leaves only the sweet and clean and wholesome in this life of ours.”

National media covered Haiselden like a celebrity: “SURGEON LETS BABY, BORN TO IDIOCY, DIE” read a New York Times headline after Haiselden refused to perform another live-saving operation on a different newborn, with a subtitle noting the decision came “FROM ALTRUISTIC MOTIVE.”

Haiselden was a sensation, but after he appeared in The Black Stork, a fictional film version of the Bollinger case, he lost control of his message. Promotional material for the film billed it as a “eugenic love story” and “eugenic photoplay,” intended to elicit good feeling for the mother’s choice not to save her child after seeing the future he would grow up to have. But audience members empathized with the baby. Unlike the pro-eugenics op-eds or lecture tours that spoon-fed policy messages to audiences, movies and fiction gave the public more freedom of interpretation. And seeing the dead boy’s alternative life in The Black Stork unsettled them.

Those who did sympathize with the eugenics movement, meanwhile, also objected to The Black Stork: They did not want to see graphic depictions of physical deformities on the screen. All of this, Pernick argues, led to a backlash that ultimately led regional and national censorship bodies to ban or regulate eugenic themes, whether the subject was shown in a positive or negative light.

Pushing eugenics practices off the popular screen wasn’t exactly a win for the anti-eugenics camp. In the years following The Black Stork, eugenic films could still be screened for health professionals—and these works, hidden from public view, continued influencing policy that would become responsible for some of the most vile compulsory and coercive sterilization laws in the U.S. targeting Indigenous, Black, brown, poor, disabled, unmarried, mentally ill, and incarcerated people, among others. This “firmer distinction between education, medical, and social films and entertainment films” that obscured eugenic sterilization campaigns from the public came just as the “professional powers to intervene in the bodies and lives of the ‘unfit’ continued to expand,” as scholar Angela M. Smith pinpoints in Hideous Progeny: Disability, Eugenics, and Classic Horror Cinema.

In 1927—the same year censors approved a heavily-edited version of The Black Stork for rerelease under the title Are You Fit to Marry?—the U.S. Supreme Court upheld Virginia’s state-enforced sterilization law, ruling 8-1 in Buck v. Bell that 18-year-old Carrie Buck could be legally sterilized for being “feeble minded,” a decision that influenced Adolf Hitler when he designed the eugenics system for Nazi Germany. (“There is today one state in which at least weak beginnings toward a better conception are noticeable. Of course, it is not our model German Republic, but the American Union,” he wrote in Mein Kampf.)

After World War II, when the full extent of the horrors of Hitler’s Third Reich were revealed to the world, the eugenics movement lost momentum. But its influence continued on—the U.S. sanctioned mass institutionalization and forced sterilization policies into the 1970s. (Oregon’s last state-sanctioned forced sterilization occurred in 1981.) Today, the advancement of the “great replacement” theory—the racist ideology that there’s a conspiracy to “replace” white Americans—is yet another callback to a eugenics-based belief set, and is reflected in everything from the fight over abortion rights to the Buffalo mass shooting in May.

That’s why it’s important that shows like Star Trek—which has touched on the dangers of eugenics since the introduction of its greatest antagonist, the genetically engineered Übermensch Khan Noonien Singh, back in 1967—continue to put a spotlight on the subject.

Too often, the science—or in this case, racist, classist, ableist, long-debunked pseudoscience—that shapes policy has been argued behind closed doors. Looking back on The Black Stork and its impact, is a reminder of why it matters that we don’t shy away from confronting it on screen.