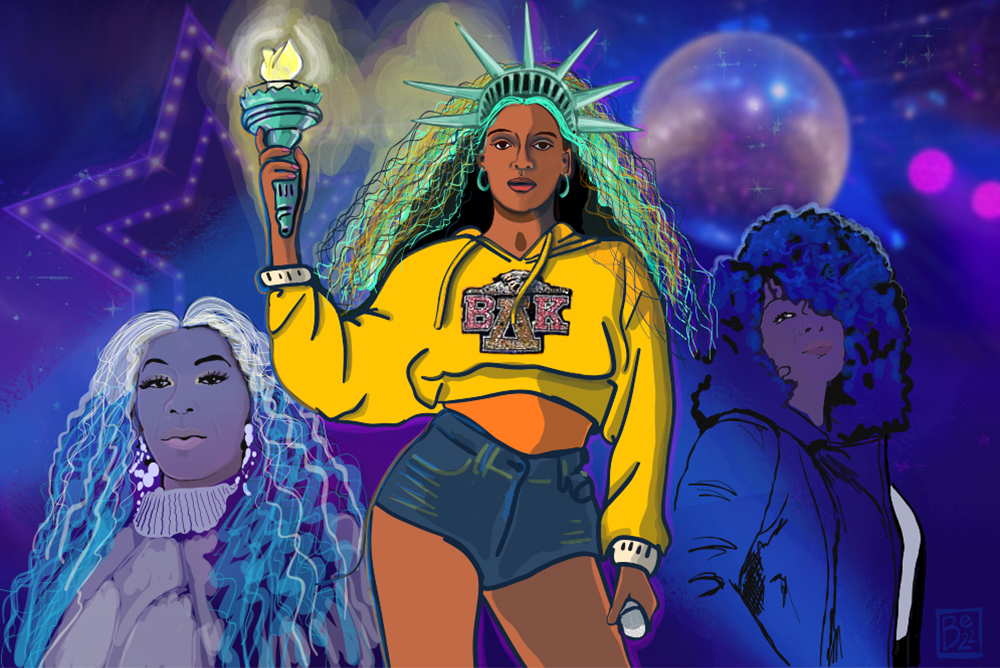 Beyoncé's latest album, Renaissance, is drawing "not only on the sound, but also the aesthetics and ethos of liberation fostered by her dance forebearers," writes H. Zahra Caldwell. Illustration by Be Boggs.


I can very clearly remember in 1993 the first time I heard Robin S.’s “Show Me Love.” I felt moved.

It wasn’t just me. The infectious groove and Black gospel diva delivery filled dance havens across New York City (where I had become a studied and serious house head) and all over the country. It had us all doing our best house moves on the dance floor as we loudly sang along to the lyrics of the anthem, still considered, by many, to be the last great song of the golden age of the house and dance movement.

In the late ’80s, it seemed everyone was into this music. There was so much going on: inflation, a global AIDS pandemic, gender discrimination and racial strife, and government failure and corruption. The dance floor was a place to sweat it all out. Inflected with house music, it became a truly liberatory space that Black women and queer folks of color were the key architects of.

Now, as we’re faced with similar societal crises—rampant inflation, the COVID pandemic, racial, political, and social disunity—one of the biggest stars on the planet is bringing it back. Beyoncé’s first single, “Break My Soul,” off of her multi-part project, Renaissance, out tomorrow, heavily samples “Show Me Love,” using house and dance to speak directly and irreverently to the moment.

Beyoncé has long established herself in the tradition of what I term “Black female cool,” a historical line of Black women artists whose cultural production and social engagement have reflected both the Black woman’s unique interior self and external struggles. The singer is known for raising feminist themes and spotlighting challenges to Black life, such as police brutality and women’s inequality.

From her headlining Coachella performance, which included over 100 Black performers in the marching band military formation of historically Black colleges and universities (HBCUs), to her homages to the South, Beyoncé draws on and salutes Black tradition. She speaks to and for Black women. She has also given queer culture its due when many artists failed to directly acknowledge its substantial popular imprint. Now, with Renaissance, she is purposefully reaching back to the unsung Black divas of dance, who, in tough times, were continuously signaling pathways to freedom in their verses.

Beyond labor and social discord, “Break My Soul,” is about liberty, the freedom of thought, spirit, and movement. It gives some sustenance to our souls, as it simultaneously illuminates the looming economic and political forces surrounding all of our bodies.

Beyoncé is drawing not only on the sound, but also the aesthetics and ethos of liberation fostered by her dance forebearers. This legacy includes Loleatta Holloway, whose song “Love Sensation” became the foundation of vocal and musical sampling in early house; Jocelyn Brown, whose “Somebody Else’s Guy” was a blueprint for ’80s dance music formula; and gender-defying icon Sylvester, whose “Do You Wanna Funk?” was a lesson in transformative angelic funk. This says nothing of their many formidable contemporaries, such as Gwen Guthrie and Alicia Myers or the many seminal DJs of house, such as Larry Levan and Frankie Knuckles who ascended from vibrant Black gay nightclubs. The starkly segregated homophobic music landscape kept the majority of these singers and DJs from true breakout success, despite the fact that they were laying the groundwork for the genre for little money or credit.

Then came ’90s pop, which got a firm stranglehold on dance. It had already killed disco and was now stalking its progeny, house. With it, the national airwaves brought the boil to an easy simmer, extracting more accessible club music from the unapologetic strongly queered and Black diva dominated genres of house and underground dance. As pop ascended, house lost its fleeting moment of commercial emergence—one of the reasons Robin S.’s song that broke through in ’93 was such a pleasant reminder of the truly liberatory space that house and dance of that era embodied.

Renaissance is taking from all these threads and transporting us all back to the spirit of house once again, while also reminding us that the production of dance music never stopped. It’s continued and multiplied in forms, such as bounce, a fusion of dance and southern Hip Hop with a strong queer base, developed out in New Orleans. “Break My Soul” has this legacy, too, with queer bounce artist Big Freedia’s song “Explode” sampled in the track. It’s all a reminder that house is still a refuge that can transport us mentally and physically away through boogie. As Beyoncé said of her new album: “my intention was to create a safe place, a place without judgment. A place to be free of perfectionism and overthinking. A place to scream, release, feel freedom.” She adds, “I hope you find joy in this music.”

Beyond labor and social discord, “Break My Soul,” is about liberty, the freedom of thought, spirit, and movement. It gives some sustenance to our souls, as it simultaneously illuminates the looming economic and political forces surrounding all of our bodies. As Beyoncé sings, “You won’t break my soul … I just fell in love, And I just quit my job, I’m gonna find new drive … I’m takin’ my new salvation … I’ma build my own foundation …”  This message of finding freedom outside the economic and political structures conjures the legacy of the house and dance movement.

Scores of people rethought their lives and the meaning of personal happiness during the COVID-19 lockdown. From spikes in break-ups and divorces to wild relocations to the Great Resignation (the high number of people who voluntarily resigned from their jobs during this pandemic), many were attempting to find or reconstruct bliss, even momentarily. This included big moves by women, people of color, and those at the bottom of the economic ladder. Inequity was made even more visible as the world concentrated the burden on their backs. Beyoncé speaks their language when she says that their soul, that spiritual core of who you are, is intact and will not be broken.

In these times, one answer to the question “where can freedom be found?” is “where we last left it”—on the dance floor. I am not talking a girls’ night out here. I’m referencing the holy state of being that pure music can illicit. Be it disco, house, bounce, or some other dance club genre. Dancing for the sake of dancing. It’s that “come as you are” crowd feeling that accompanied house and ’80s dance—eclectic club kids spanning all genders and sexual orientations from downtown mixed with those from uptown wearing baggy jeans and extra clean sneakers, and middle-aged white men in business suits from midtown—which may be just what the world needs right now.

The ‘Come As You Are’ Playlist: