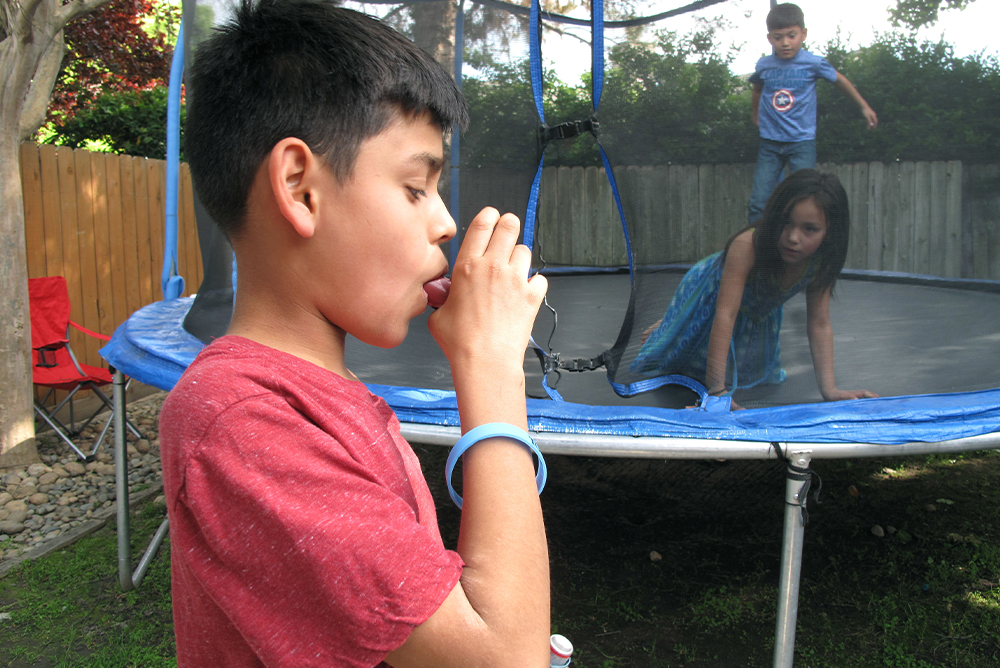 "Compared to the national average, children in the San Joaquin Valley are twice as likely to be diagnosed with asthma before age 18," writes Catherine Garoupa White. San Joaquin Valley is the United States’ most polluted air basin for fine particles. Courtesy of AP Images.


California’s San Joaquin Valley is a place of contradictions: It is the most agriculturally productive region in the world, growing over 250 crops and grossing approximately $35 billion in annual sales of everything from fruit and nuts to livestock, wine, milk, and grains. Its 27,000 square miles reside in a geographical sweet spot, with a Mediterranean climate and land watered by once mighty rivers flowing from the Sierra Nevada mountains. The valley possesses incredible cultural diversity, too: People of more than 70 different ethnicities, speaking over 100 languages, call the region home. It is the place that gave rise, among many important cultural moments, to the powerful farmworker movement that built solidarity across race, class, and other divides.

Despite this abundance, it is also a region of deep and concentrated poverty and food insecurity. The San Joaquin Valley is the United States’ most polluted air basin for fine particles (which, when inhaled, increase the risk of a host of health problems, including early death). It is one of the surfaces on Earth most altered by humankind due to a century of mining groundwater, which has caused land to sink by as much as 28 feet in some places and counting.

These contradictions hold obvious perils, but also promise—that the science and resources government and industry have poured into extraction can be redistributed and focused instead on eliminating environmental racism and building just, livable communities.

I was born and raised in the heart of the valley, in Madera County. I was diagnosed with asthma as a kid, although my race and class in many ways buffered me from the worst impacts of our air pollution problems.

For five years I worked as an organizer for the Central Valley Air Quality Coalition (CVAQ), raising awareness of air pollution’s health impacts. Over and over again, decision makers, air regulators, and industry lobbyists constantly told me, and the community leaders and youth advocates I worked with, that we had to accept our fate, that where we live makes pollution unavoidable.

As I keep hearing, the people of south Stockton, like people across the San Joaquin Valley, have a ‘choice’: accept pollution-causing industries or suffer lost jobs and revenue. But I know it does not have to be this way.

The unhealthy air to which all 4.3 million valley breathers are supposed to resign ourselves is partly rooted in the region’s role in feeding the nation and world. Industrialized agribusiness in the valley utilizes hundreds of millions of tons of pesticides, fertilizers, and other chemical inputs and uses polluting equipment such as tractors and nut harvesters. The region is also a major source of oil and natural gas production, which emits a slew of toxic air pollutants and contributes to smog and particle pollution. Trucks and trains traveling up, down, and across the state via freeways that run through our communities play a role as well. Catastrophic, climate change-fueled wildfires and extreme heat compound an already dire situation.

Research from California State University, Fullerton has shown that unhealthy air costs our region at least $6 billion dollars per year—paid in premature deaths, asthma attacks and other serious medical conditions, and missed school and work days. Compared to the national average, children in the San Joaquin Valley are twice as likely to be diagnosed with asthma before age 18.

The valley is a designated “sacrifice zone,” where industrial extraction and disposal takes precedence over human health—and where low-income, Black, brown, and Indigenous residents are asked to sacrifice the most. That is certainly true of south Stockton, which has some of the highest asthma rates in the state. Barred from living in other parts of the city, Filipinos immigrated there in the early 20th century, and the neighborhood became home to the largest diaspora in the nation. But in the 1970s, the state demolished large swaths of the neighborhood to construct Highway 4, an artery for the flow of goods in and out of the Port of Stockton. The port concentrates cancer-causing diesel pollution from ships, trains, trucks, and other equipment, which commingles with other pollution sources nearby, such as an industrial biomass plant that burns woody waste.

As I keep hearing, the people of south Stockton, like people across the San Joaquin Valley, have a “choice”: accept pollution-causing industries or suffer lost jobs and revenue. But I know it does not have to be this way. I have seen community-innovated solutions firsthand, in both my academic research and advocacy work in the region.

In extensive interviews with advocates, staff, and decision-makers at the San Joaquin Valley Air District, I learned that they agree on one thing: that the region needs transformation away from extractive industries in order to achieve clean air. As one decision-maker told me, “The only way you’re going to change the Air [District Governing] Board is change the boards of supervisors because they control the Air Board, and until you get a majority of the supervisors who don’t have that farmer mentality, you’re not going to be able to change the valley.” They added, “The economy has to be diversified.”

Change, however, can also come from the ground up, which I’ve witnessed in my time at CVAQ, where I returned as executive director after receiving my PhD in geography. I’ve seen how communities across the valley continue to take matters into their own hands when it comes to air pollution, to protect and improve neighborhoods. Local campaigns in Kern and Los Angeles Counties, combined with years of cross-regional organizing, have built the political will to help institute a 3,200-foot health and safety setback rule to protect people from oil drilling. The setback will help keep homes, hospitals, schools, and other sensitive receptors farther from oil wells, which increase the risks of respiratory illnesses, cancer, and other health issues for people living and working nearby.

In south Stockton, community groups like Little Manila Rising are providing asthma management services to the most impacted households, distributing resources such as indoor air filters, planting trees, and employing unhoused and formerly incarcerated community members. Little Manila Rising, CVAQ, and the enforcement division of the California Air Resources Board are collaborating on a multi-year research project that is engaging the community in studying and implementing solutions to address diesel truck traffic.

There are many more opportunities to create jobs and build a more equitable and healthy San Joaquin Valley. We have a history of building solidarity to achieve change. California has abundant science, people power, and economic resources to make good on its claims as an environmental trendsetter that prioritizes equity.