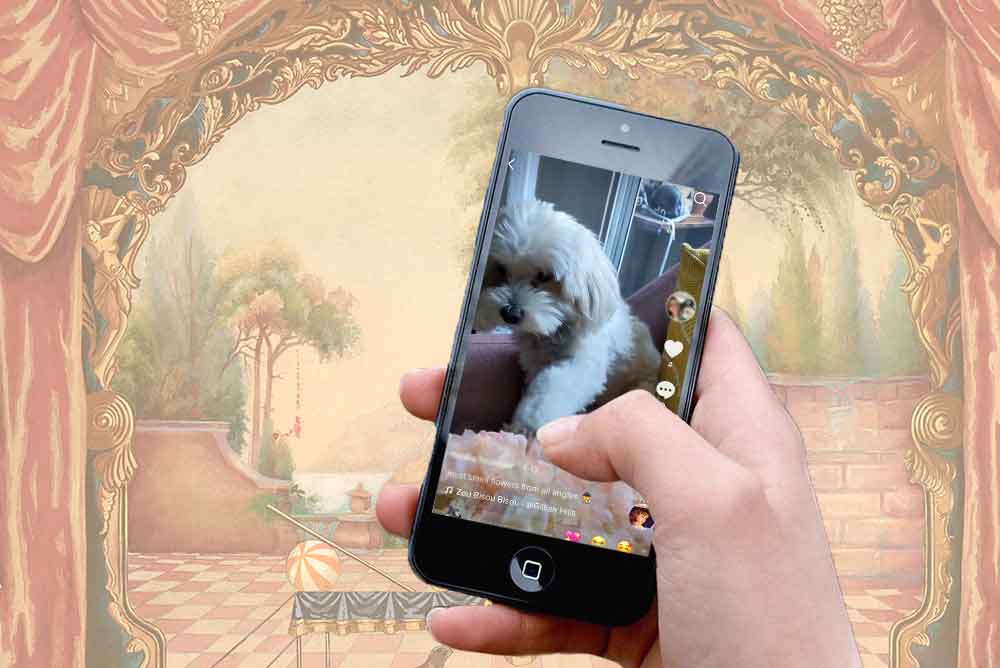 A century later, vaudeville returns… only this time the acts are playing on TikTok. Images courtesy of Index of American Design and Public Domain. Illustration by Zócalo.

If the viral Change.org petition that made the rounds this summer to “MAKE INSTAGRAM INSTAGRAM AGAIN” is any indicator, Instagram’s lurching attempts to try to become more like TikTok haven’t been going well.

Synonymous with the highly edited lifestyle post, Instagram has long functioned like a high school in a John Hughes movie: accruing “likes” is a popularity contest for visibility—except that if you’re voted “prom queen” on the platform it can translate to some serious brand and sponsorship deals.

But TikTok has tailored its algorithm in a radically different way. A home for short-form videos (the concept first pioneered by its predecessor Vine), its aim is to deliver “content to each user that is likely to be of interest to that particular user.”

Of course, the real goal of all of these platforms is to keep us scrolling. But TikTok’s emphasis on individually curated feeds and niche material has taken over today’s media landscape. And its dominance has forced other social media companies to adapt (to varying degrees of success), if they want to stay relevant, or at least keep their backers happy. The result—a smorgasbord of content that’s emerged across platforms—feels like a constantly changing, pluralistic pit of variety theater. And it’s ushering in a new era of popular entertainment. The closest equivalent to it that I can think of is vaudeville.

The original vaudeville rose up in the late 19th and early 20th centuries amid a moment of profound change in American life, offering its own constantly changing acts in response to a country in flux.

At its height, the vaudeville machine was putting more than 25,000 on stage daily to perform their routines for millions. “It was the largest entertainment system the world had ever seen, held together by railroad and telegraph and ordered by form and filing cabinet,” historian Samuel E. Backer writes of the business of vaudeville. And before you could wrap your head around any of these “fast-paced succession of individual performances,” they were already being cycled out for something new.

A typical show ran for about as long as a blockbuster film’s duration today, but people could choose to watch the whole thing or just sit in on the “turns” on the program bill that most appealed to them.

Those performances ranged dramatically. Singing and dancing numbers were on almost every bill, but you never knew what other kinds of other acts would show up on the ticket. Take the silent comic Chaz Chase, who gained acclaim for eating everything from cigarettes and roses on stage (you could argue it was a precursor to the Korean-inspired food-eating mukbang genre, except here the effect was achieved by slight-of-hand trickery). Or Edgar “Painless” Parker, a dentist who was famous for extracting (very real) teeth on stage. They’re just two of the many, varied performers who found a voice on the vaudeville stage.

As I scroll through TikTok today and stop to watch a cat in a chef’s hat making a latte or catch up on the latest Gen Z drama acted out via plastic figurine, am I all that different from the audiences these theaters cultivated a century ago?

However unique the routines seemed, there was always a shared DNA to the performances, a lexicon of stock jokes, comedy routines, and other materials that the performers traveling on the vaudeville circuit were constantly in conversation around. What made certain ones shine were the extra flourishes added, “what cannot be transcribed in words, the physical comedy, or the ‘business’—the humor of inflections and body language at which so many vaudevillians excelled,” as the Library of Congress put it.

Vaudeville quickly gained a reputation for being a highly populist, highly optimistic form of entertainment. The vaudevillian impresario E. F. Albee sounds positively Pollyanna about the medium in one interview, claiming that in vaudeville “there is always something for everybody, just as in every state and city, in every county and town in our democratic country, there is opportunity for everybody, a chance for all.”

That’s a bit of a stretch—but there is something to Albee’s sentiment. Performers on stage often reflected the diversity of the people in the seats watching them. One of the most influential scholars on vaudeville, David Monod, created an online database of vaudeville acts that highlights this range of talent and scope, which reached people from different race, ethnicity, gender, and economic class (with the notable exception of the poorest Americans, Monod notes, who couldn’t afford the price of a ticket). But that didn’t mean vaudeville spoke for everyone—its comedy, especially, was often built on tired routines that stereotyped and dehumanized people based on their race and ethnicity. Especially for African American performers, racism was an omnipresent reality of the business, which is why some Black artists eventually broke away from the predominantly white vaudeville circuits to create their own shows.

If there’s a name to know behind the mélange of tastes that became the vaudeville voice, it’s Tony Pastor, a devout Catholic who’s remembered as the “Father of Vaudeville.” In 1881, he opened up the Tammany Hall theater on East 14th Street in New York, where he set out to make vaudeville family-friendly. Because of his influence, burlesque, a staple in early vaudeville “hot shows,” was increasingly pushed out in favor of “clean shows” that attracted less police presence. “Pastor’s shows became so clean that ‘a child could take his parents into his theatre,’” quipped one observer.

Bostonians B.F. Keith and Edward Albee expanded on Pastor’s vision, opening theaters that continued this “focus on respectability,” according to vaudeville scholar Mark Hauser. Hauser notes that Keith and Albee, who received funding from the Archdiocese of Boston, even had Sunday school teachers standing at the back of the theater to watch for vulgarities.

Because of this, while vaudeville is often said to have mirrored the public’s tastes, historian John DiMeglio cautioned that “it also exercised a considerable power in shaping its viewers’ feelings” including their moral attitudes and ideas—a theme that echoes today in TikTok’s Chinese parent company ByteDance, which has played an invisible hand in determining what videos can gain traction on the platform.

Back in the early 20th century, the vaudeville form seemed unstoppable. And then, one day, a new emerging entertainment medium came along: film. Suddenly big- and small-time performers alike who had been incubated on the vaudeville circuit found their heyday had ended, and had no choice but to adapt to fresh performative conventions or fade out of relevancy.

As I scroll through TikTok today and stop to watch a cat in a chef’s hat make a latte or catch up on the latest Gen Z drama acted out via plastic figurine, am I all that different from the audiences these theaters cultivated a century ago? I, too, am watching as new trends rise and fall, and seeing creators learn from one another to create, recycle, and reimagine their acts to meet and shape our moment. Only this time around, the talent pool is worldwide.

How long TikTok will have us in its grasp is impossible to say. But the reason it captivates us is no surprise. As Monod, the vaudeville scholar, writes, vaudeville was “a playful expression of early 20th century modernity” that appealed to people seeking “not just escape but stipulation.” This sentiment easily captures TikTok’s appeal a century later.

And just like audiences watching Chanticleer cyclists harmonize their way across stage in the early 1900s, when I open TikTok and see the latest video appear on my screen, I can’t look away.