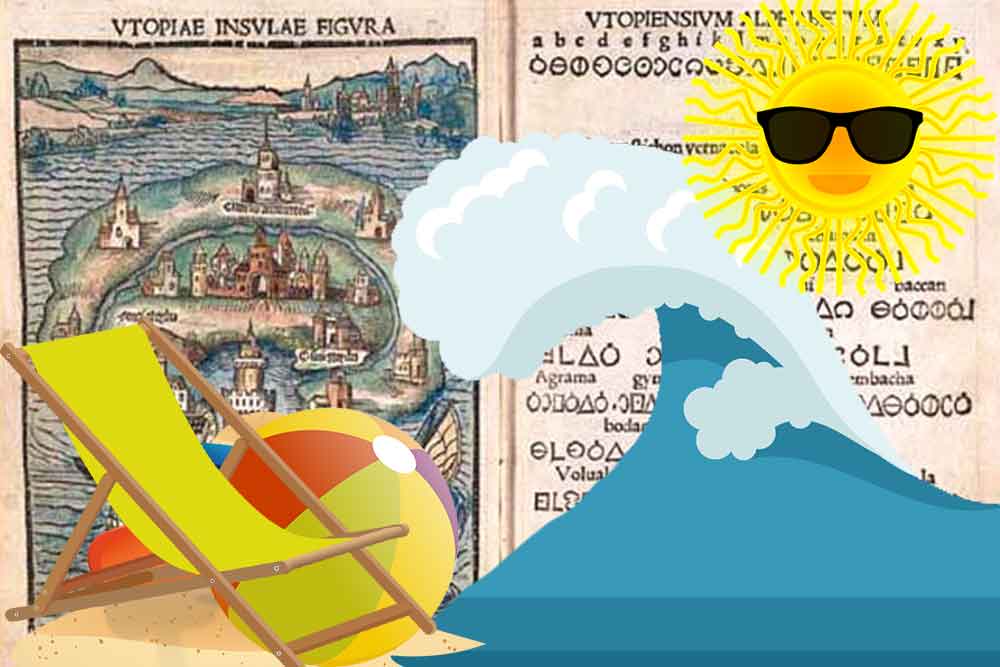 From the other side of the calendar, Hot Girl Summer beckons, writes columnist Jackie Mansky. Images courtesy of public domain and Openclipart. Illustration by Zócalo.

Here in Southern California, the Santa Ana winds are blowing, summoning us back to school, back to our routines, back to our lives.

The potential that once hung so heady in the sun-warmed solstice air is no more.

Houston rapper Megan Thee Stallion popularized the phrase “hot girl summer” before COVID, releasing a 2019 song of the same name that became her first No. 1 hit. Of its meaning, she told the Root, “It’s about women and men being unapologetically them, just having a good-ass time, hyping up your friends, doing you.” In other words, a summer where you can be in charge of your own happiness.

The word “hot” has proven elastic in the English language over the centuries. Its use as a way to communicate attraction and desire goes all the way back to Chaucer and Shakespeare. But its incorporation as slang is relatively recent; in print, at least, the Oxford English Dictionary dates its use back to a 1926 New Republic article, which reminds us—if we’ve “forgotten” our mythology—that Aphrodite was the “hot momma of goddesses.” By the time Paris Hilton started designating everything from velour tracksuits to the Earth “hot” in the early 2000s, the nimbleness of hotness was increasingly apparent, though it was still up to tastemakers to determine its parameters.

With Megan Thee Stallion’s latest popularization of “hot,” though, the boundaries of the word were reframed once again. No longer is it only a label that someone can slap on you—instead, her vision of a “hot girl” is anyone’s mantle to claim. The writer Danya Issawi called attention to this phenomenon in the New York Times recently: “Hotness is no longer just in the eye of the beholder,” Issawi observed. “It’s a mood. It’s a vibe.”

Looking at it from the other side of Labor Day, this year, I think I’ve finally realized what it is that we’ve been talking about when we talk about Hot Girl Summer. And why it will never truly manifest. Hot Girl Summer is utopia. What we hope for, and then mourn as we slide into September, is a different reality.

In this context, the phenomenon of doing hot girl things, which has taken off across social media, can be as mundane as going for a walk or doing your taxes. The emphasis is entirely on how you do them—and how you feel doing them—which is why, for instance, it’s been used as a way to destigmatize mental and physical ailments. Can hot girls have IBS? (Of course.) Depression? (Who doesn’t in this day and age!)

But if being a hot girl is a self-affirming act that you as an individual can manifest, I’ve come to think of Hot Girl Summer as a collective societal pact. Amid the sorrows, horrors, and existential crises of the modern life, Hot Girl Summer has felt like the promise of a better world that we can build together.

Which is why, for the past two years, the idea of Hot Girl Summer—née “Hot Vax Summer” in 2021, and this year’s “Hot Girl Summer 2.0” or “‘Hot Vax Summer,’ but for real this time” (emphasis my own)—has loomed so large in the collective imagination.

Like Charlie Brown revving up to kick the prodigal football each Memorial Day, I’ve held my breath, watching that sun-kissed horizon. Maybe this is the summer we’ve been anticipating, the summer it will all happen—only for a new avalanche of horrors to tumble out.

Looking at it from the other side of Labor Day this year, I think I’ve finally realized what it is that we’ve been talking about when we talk about Hot Girl Summer. And why it will never truly manifest. Hot Girl Summer is utopia. What we hope for, and then mourn as we slide into September, is a different reality.

Throughout the ages and across the globe, people have always expressed this longing for another, better world.

“Utopian vision invariably presents itself as a social commentary, an allegory of the desire for change and transformation,” wrote the scholar Longxi Zhang in the academic journal Utopian Studies. This desire, Zhang points out, is “deeply ingrained in the very nature of the human condition, as no one in any society is unwilling, if not actively trying, to make life better and achieve the optimum out of our limited resources and capabilities.”

When Thomas More wrote his socio-political satire Utopia just over 500 years ago in 1516, he gave us a word for this hope. But while it’s often said that he was pulling from the Greek word ou-topos or “no place,” More was actually playing on the Greek word eu-topos or “a good place.” As the British Library points out, “at the very heart of the word is a vital question: can a perfect world ever be realized?”

But I’d argue that question has always been moot.

Even if a utopia—or a Hot Girl Summer—isn’t possible, it doesn’t mean we can’t all work toward it to the best of our ability. And do so unapologetically, as I think Megan Thee Stallion would argue.

After all, the most important thing to remember about utopias is that they are always a state of pursuit.

The Uruguayan literary master Eduardo Galeano put it most beautifully when he wrote: “Utopia lies at the horizon. When I draw nearer by two steps, it retreats two steps. If I proceed ten steps forward, it swiftly slips ten steps ahead. No matter how far I go, I can never reach it. What, then, is the purpose of utopia? It is to cause us to advance.”

From the other side of the calendar, Hot Girl Summer, too, beckons us forward, a coconut-scented siren call of what could be.