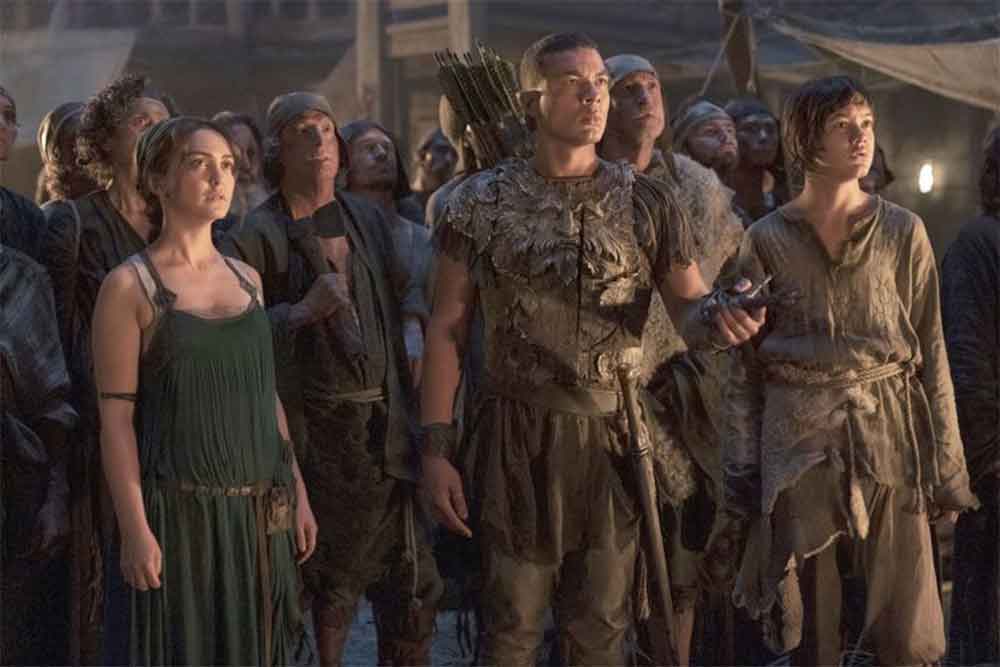 A racist backlash against the new, more diverse iterations of ‘The Lord of the Rings’ and ‘The Game of Thrones’ franchises has urged a reckoning on the fictional (and real) stories we’re telling about Europe’s Middle Ages. Courtesy of Amazon Prime.

The pre-industrial Western landscape of wizards and magic, good and evil, elves and dwarves of J.R.R. Tolkien’s imagination has become a well-worn part of our cultural geography. Amazon’s shiny new Lord of the Rings prequel series is just the latest tribute to this worldbuilding, drawing on Tolkien’s expansive, encyclopedic volumes of invented language, lore, and cartography to tell a new story that dates back thousands of years before a hobbit by the name of Bilbo Baggins ever left the Shire to go on an adventure.

But watching The Rings of Power (which, for the record, looks immaculate, sounds even better, and has a great cast to boot) dive back into this medieval fantasyland—one it populates alongside contemporaries like House of the Dragon (HBO’s Game of Thrones prequel)—is also a reminder of how lily white the medieval space continues to be imagined as. After both shows debuted more racially diverse casts than their predecessors, a vitriolic cry rang out from the corners of the internet where a fire-breathing dragon can exist, but a Black elf cannot. The torrent of racist hatred that’s followed is part of a longer-simmering problem that’s demanded a reckoning on the fictional (and real) stories we’re telling about Europe’s Middle Ages.

The roots of the medieval world that all these fantasy stories are pulling from was constructed in the mid-20th century by the so-called Oxford School or group. Writer Jessica Yates first coined the name for the group of fantasy writers 50 years after the release of The Hobbit, in a 1987 article for a popular British children’s book magazine. In the piece, she traces this literary and academic cradle back to Tolkien and his friend and colleague C.S. Lewis, who in the 1950s lectured future fantasy writers such as Diana Wynne Jones, Susan Cooper, Kevin Crossley-Holland, and Alan Garner (the latter being the first to achieve fame with the 1960 publication of The Weirdstone of Brisingamen).

A new age of medieval fantasy is possible, one that can offer us a wider notion of what, in all its contradictions and intricacies, the Middle Ages was—and can be.

In Re-Enchanted: The Rise of Children’s Fantasy Literature in the Twentieth Century, author Maria Sachiko Cecire dates the origins of the Oxford School two decades further back, when Tolkien and Lewis pushed a reformed curriculum in 1931 that ensured that all English students at Oxford studied the Middle Ages and Anglo-Saxon literature. Cecire argues that this “medievalist and faerie-touched” pedagogy was part of a larger ideological battle. By reaching back to an idealized past—”not the past as England actually was in the Middle Ages,” she writes, “but even more ‘real’ in a spiritual-Platonic sense: as English (and proto-English) poets had imagined it to be”— Tolkien and Lewis were pushing back against the “cult of modernity,” something they viewed as not just estranged but hostile to their belief system. The mythology they created to combat this naturally reflected who they were, and she argues, should be understood through that lens. Their works, published as the British empire’s power began to sunset, can be seen as advancing the morals of the time they grew up in: A time, she writes, of “noble bloodlines carry[ing] magic and maintaining the social hierarchies of conservative tradition.” And as Tolkien and Lewis were both white, English, Christian men, their medieval fantasy was, in turn, populated by “implicitly white, English or broadly British, Christian or proto-Christian men.”

But this was a fantasy of the medieval world. The roughly 1,000-year period of the actual Middle Ages was, in fact, notable for its cultural, racial, linguistic, and religious diversity. As historians of medieval Europe Matthew Gabriele and David M. Perry write in The Bright Ages: A New History of Medieval Europe, however, the vibrant diversity of Europe’s Middle Ages that placed it within a wider global story was intentionally de-emphasized starting in the 18th and 19th centuries. The reason? “[I]mperialist European powers and their intellectuals (often the forerunners of, or scholars in medieval studies themselves!) sought a history for their new world order,” they write, which is what first established the myth of a racially and religiously uniform Middle Ages. It preserved a false history that lingers to this day, especially in the medieval fantasy space, which has long provided cover for nationalists who take the pseudo-medieval worlds as a confirmation of their ideology. The latest to seize Tolkien being Italy’s prospective future prime minister Giorgia Meloni, the far-right nationalist politician who was recently quoted by the New York Times calling The Lord of the Rings series “a sacred text.” “I don’t consider The Lord of the Rings fantasy,” she continued.

But if medieval fantasy helped to prop up that myth of the homogenous Middle Ages, the genre might also be the most poised to dismantle that story today.

As medievalist Andrew B. R. Elliott writes in Remaking the Middle Ages, which considers cinematic portrayals of the time period, our ideas of the medieval world are based on how we are used to seeing it reflected in the culture, which is why, he argues that “audiences and filmmakers both come to play a role in the construction of the authentic medieval past—perhaps far more than historians and medievalists ever can.”

We’re seeing this in action today as this new crop of medieval fantasy seeks to depict more historically accurate versions of the Middle Ages, and call out medieval misinformation, like earlier this month, when The Rings of Power denounced the racist ideology of the trolls waging a hate campaign against its cast. “Our world has never been all white, fantasy has never been all white, Middle-earth is not all white,” a statement posted on its official Twitter handle read.

A new age of medieval fantasy is possible, one that can offer us a wider notion of what, in all its contradictions and intricacies, the Middle Ages was—and can be. But this can only come to pass if we are committed to imagining it first.