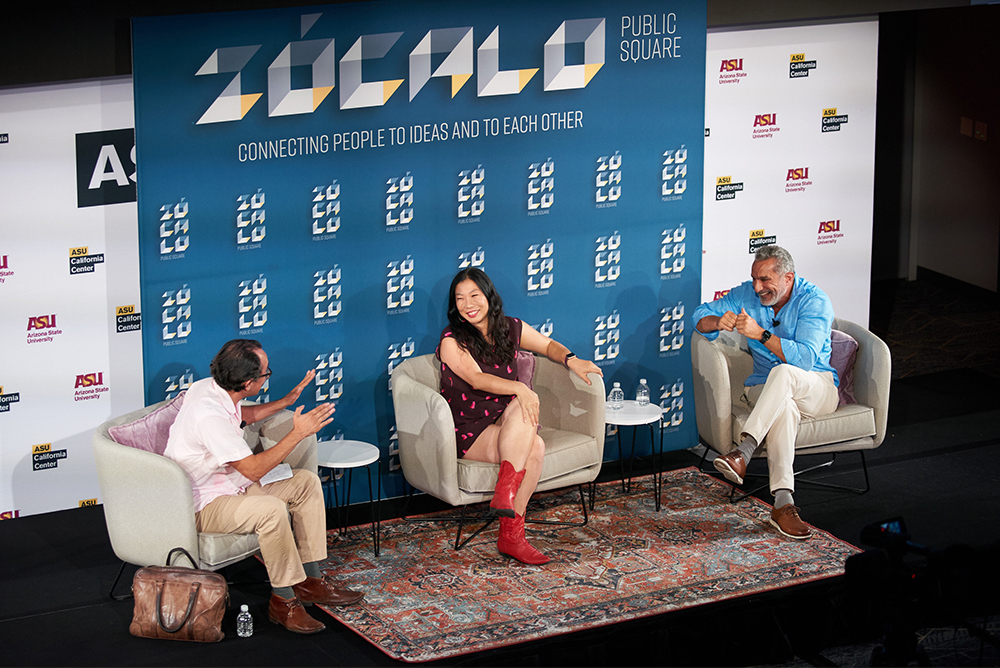 Fittingly, the Zócalo/ASU Gammage event “What Can We Laugh About?” last night opened with a joke from Los Angeles Times columnist Gustavo Arellano, who was moderating: “Knock knock.”

The prompt audience reply came in unison: “Who’s there?”

Arellano: “Zócal-OK, we can now laugh.”

There was playful booing from the in-person audience—a packed house at the ASU California Center in downtown Los Angeles—but, though the joke bombed, it set off a wide-ranging, alternately funny and serious conversation around our comedic zeitgeist. The discussion brought Arellano (no stranger to humor, including in his long-running “¡Ask a Mexican!” column) together with political satirist Bassem Youssef (dubbed the “Egyptian Jon Stewart”) and performance artist, playwright, and actor Kristina Wong (who is currently touring her 2022 Pulitzer Prize finalist work, Kristina Wong, Sweatshop Overlord).

In an era of public health and climate crises and deep political division, when many feel like they can’t laugh about what they used to, “What should we laugh about?” Arellano asked the two panelists.

“Humor must respond to its current moment,” Wong said—which for comedians means “thinking about where we need a sense of relief and not creating humor that’s a source of abuse.” She later highlighted the importance of a comedian using their platform to “push for something bigger” than crafting good jokes. (Wong’s latest play is in part about how she advocated for mutual aid at the height of the pandemic.)

The role of humor as a source of relief—not hate—was a common reprise throughout the evening.

But Youssef warned of keeping subjects or jokes off-limits. “The word ‘should’ is a dangerous word,” he said. “It’s always about drawing the line.” He recalled being jailed in Egypt and forced to flee after his political satire show Al-Bernameg “punched up” at the leaders of the country. Nonetheless, Youssef argued for giving comedians free rein—and for comedians in turn to take chances and “face the consequences” later.

But what about comedy that makes fun of everyone? Arellano used the 1974 film Blazing Saddles as an example of equal opportunity Borscht Belt-style humor that doesn’t offend. “The joke has to land,” he said.

Perhaps the healing power of comedy lies in the fact that a joke shows you that there is a life on the other side of things, even one filled with laughter.

The venue also matters. Theater audiences, Wong said, have “a lot more patience” for humor to align with social movements. She recalled her time doing stand-up 20 years ago where drunk people would demand her to “be funny” as a tray of French fries bobbed past the stage.

Youssef discussed the power and problems of satire. Yes, it offers opportunity for commentary on bad political leadership, but it also allows people to mistake funny protest march signs for activism and political involvement. Meanwhile, they delegate the fight to comedians. “Comedians are put on a pedestal,” Youssef said, imbued with too much hope and expectation. But “comedians aren’t leaders. My role stops at the edge of the stage.”

Wong agreed. “There is a missing line between the culture that shifts our thinking and the thinking that leads into the voting booth,” she said.  Governing “is so unfunny.”

Youssef does see one important political role for comedy, as a “litmus test,” he said, “to see what kind of people you have in power.” Youssef compared President Donald Trump’s boycott of the White House Correspondents’ Dinner to President Ronald Reagan, who phoned in to the 1981 dinner after being shot and wounded in an assassination attempt. Comedy can show people if “you have a good ruler or a tyrant,” Youssef declared.

Wong also highlighted the social value of comedy in offering opportunity for healing. Prompted by a question from the audience, Wong said that marginalized groups she’s worked with, like undocumented immigrants and incarcerated people, “don’t want to trot out tragic stories of their existence.” She, and they, want “to find those moments of levity and laughter.” Arellano agreed, discussing the time he reported on sexual abuse in the Catholic Church in Orange County. He got criticized for making fun of the abusers and the people covering up the scandal. But the survivors themselves respected his jokes.

Playing the devil’s advocate, Youssef offered an example of a joke that might have helped heal old wounds only to open a new one—about the lack of representation in recent awards show seasons. He suggested that as a result, we can no longer be outraged when white people are cast in roles people think should go to people of color. Wong and Arellano pushed back before moving on; the topic continued in conversations throughout the post-show reception.

An online audience question brought up the topic of cancel culture. Both Wong and Youssef agreed that cancellation is more about resources than subject matter. If a scandal proves too toxic to the bottom line and an entertainer starts losing contracts, they may be effectively canceled. But Youssef pointed to Louis C.K. and Kevin Spacey as examples of public figures making post-cancelation comebacks.

The final question of the night came from in-person audience member (and recent Zócalo guest) Josefina López: How do you make fun of your blind spots? She pushed Youssef to specifically speak about his economic and gender privilege. He was introspective, noting that he cannot see his blind spots “because they are blind.” But he employs self-deprecation around what he assumes people think are his blind spots in order “to protect myself and not get into the trauma of discovering who I am.”

“If you don’t have humor, the game is over,” Arellano said, as the conversation closed. Perhaps the healing power of comedy lies in the fact that a joke shows you that there is a life on the other side of things, even one filled with laughter. “Humor is what makes us human,” he said. 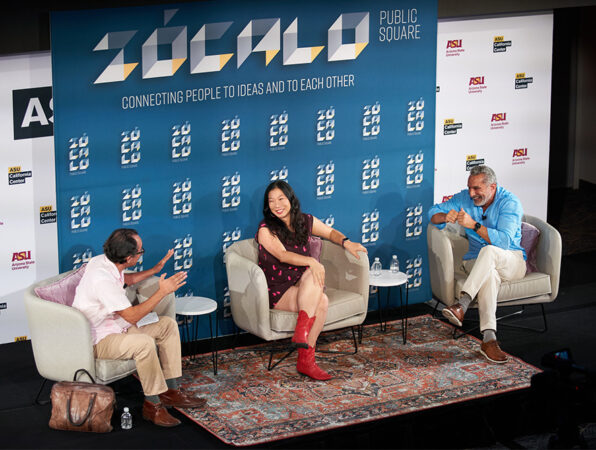 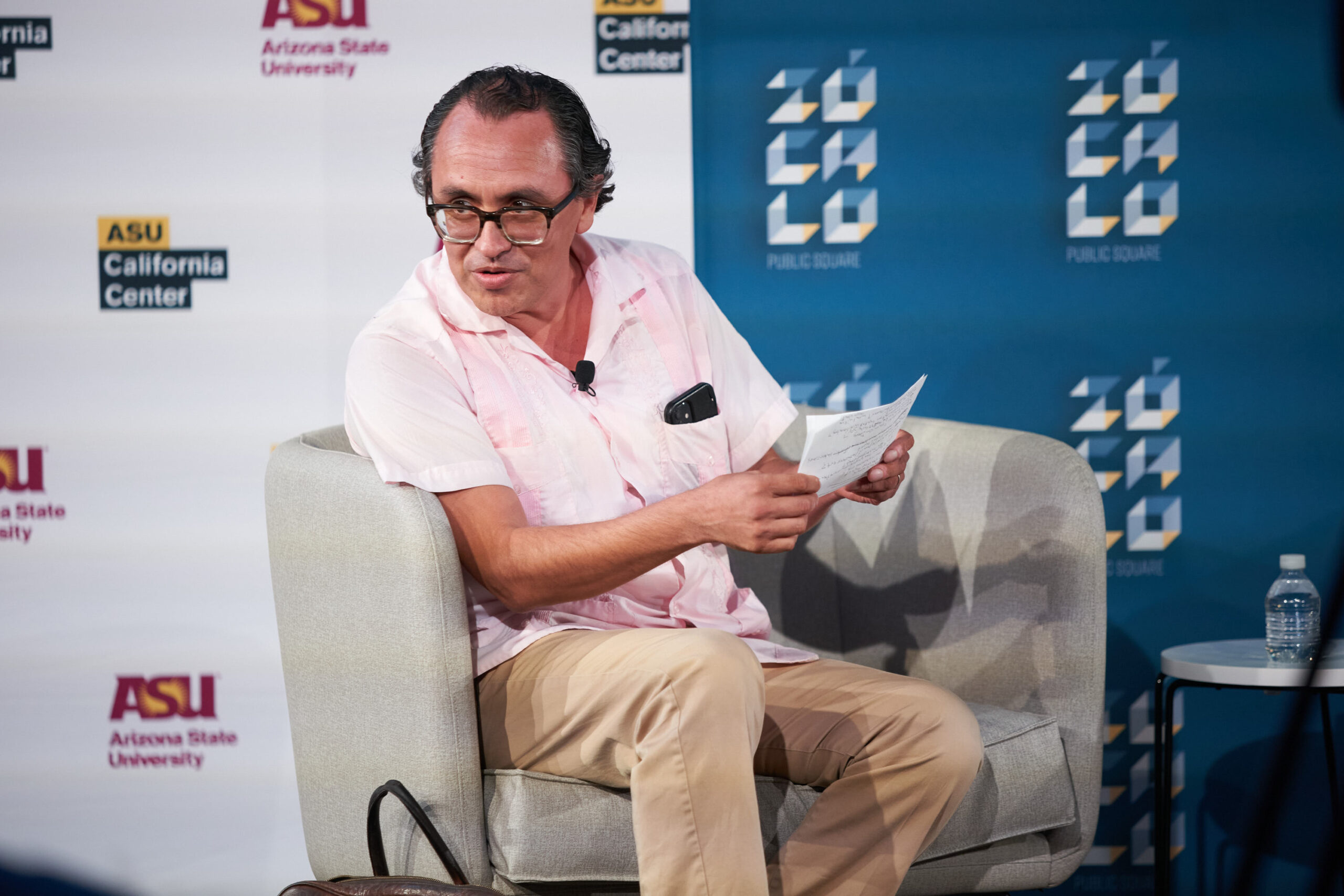 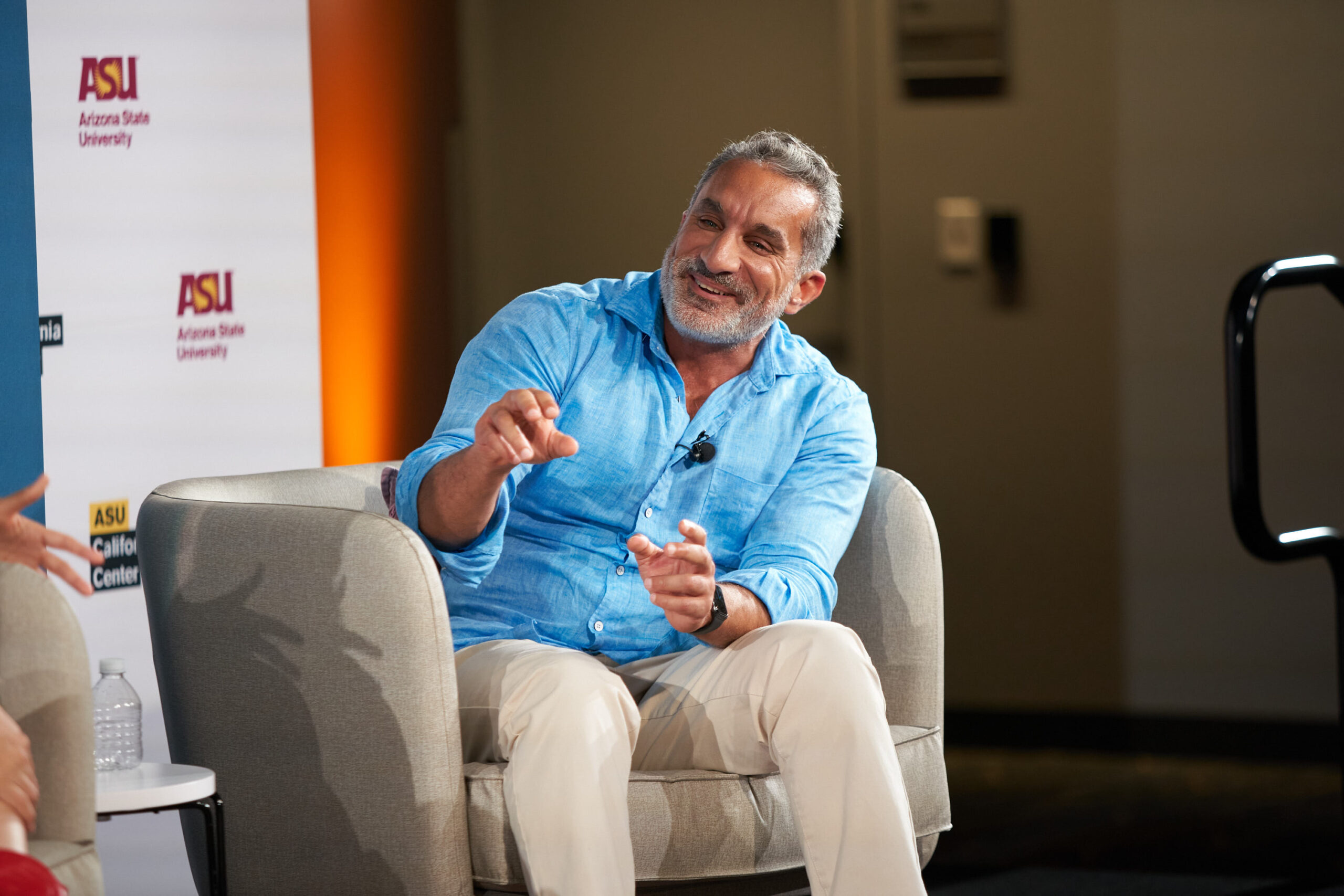 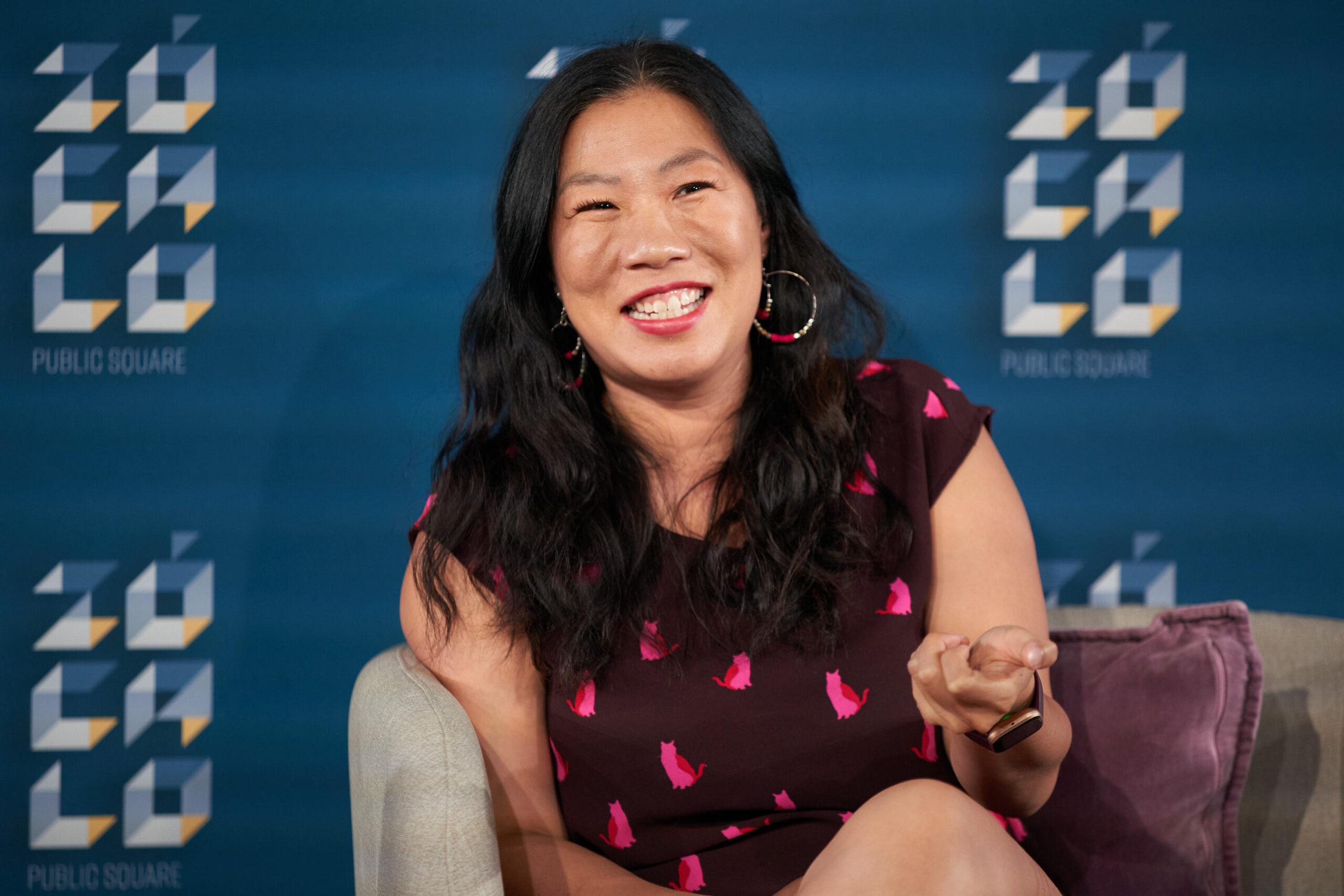 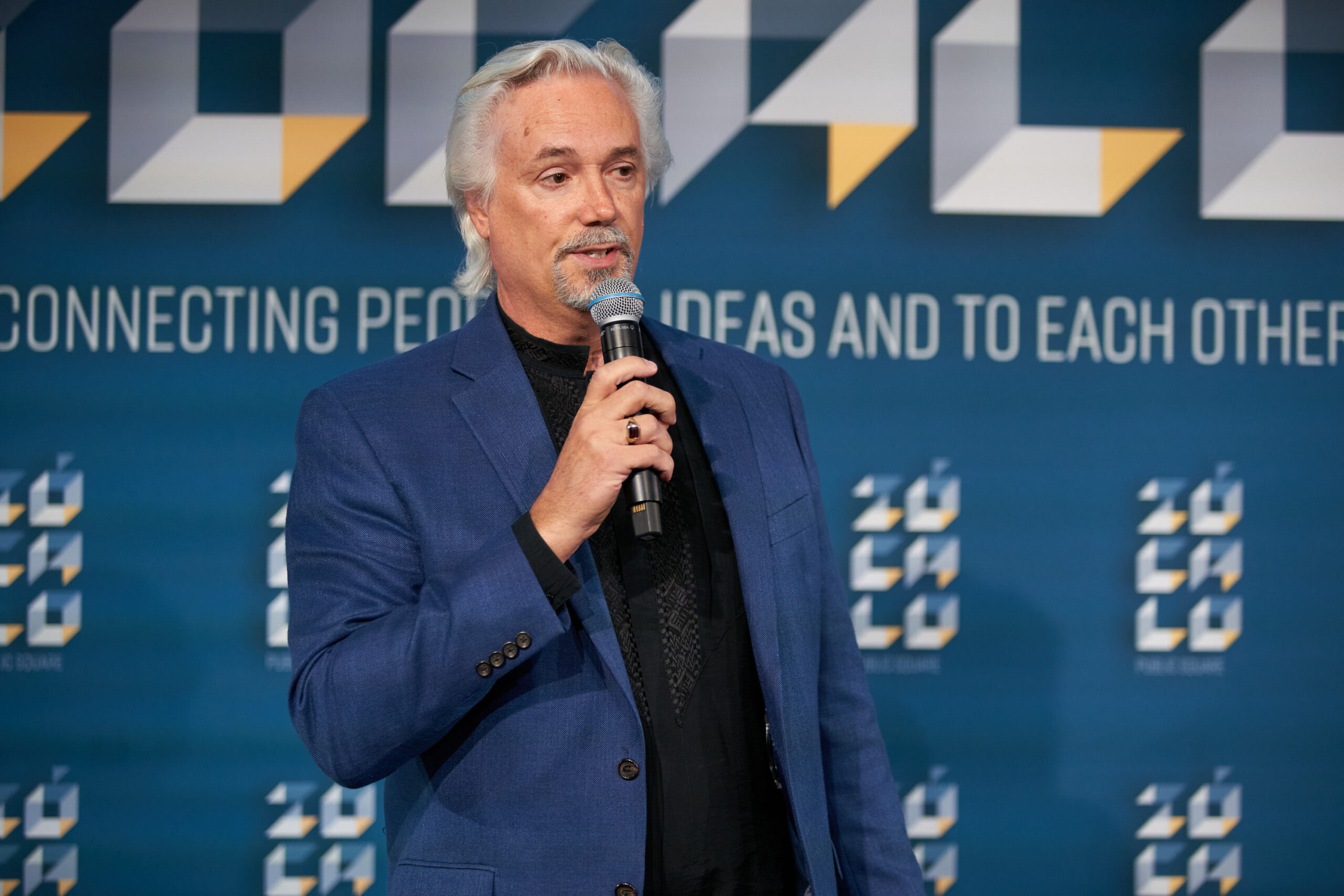 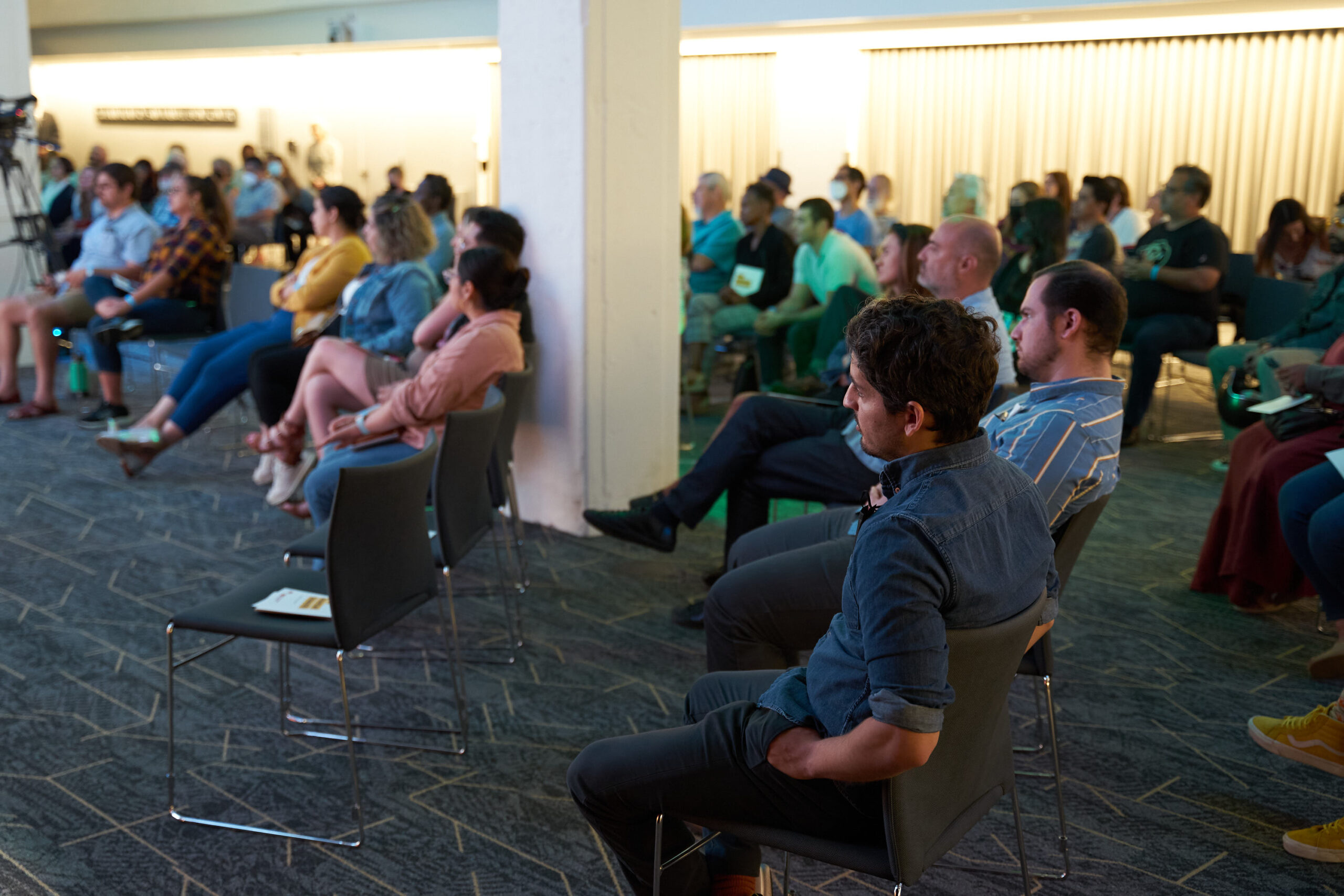 A packed house for the event