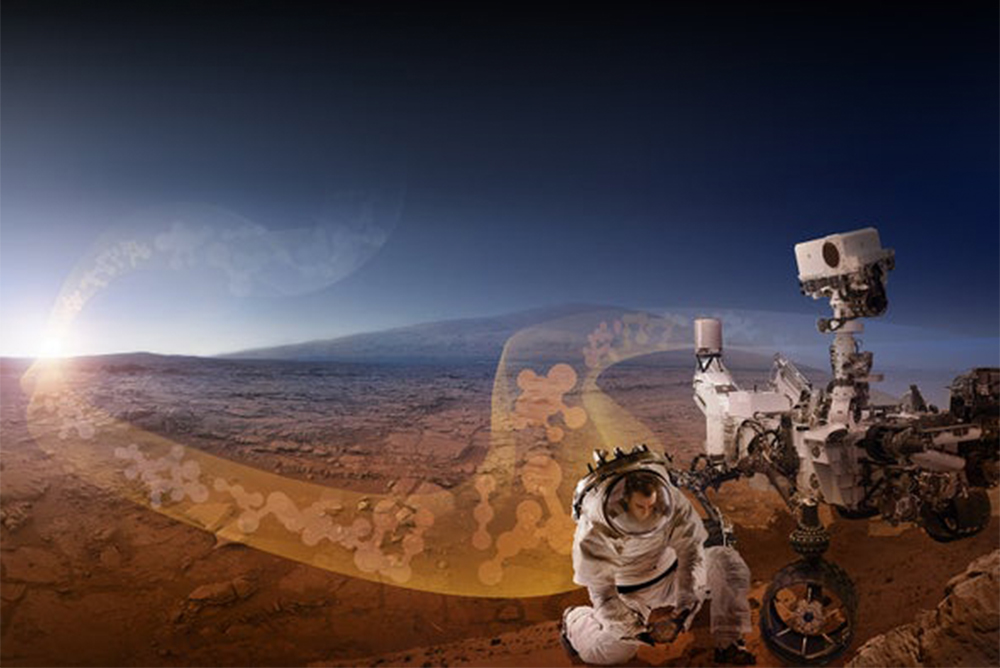 Our search for alien life is fueled by wonder, writes astrobiologist Charles Cockell. Courtesy of NASA.


The most memorable taxi ride of my life occurred when I stepped into a cab driven by a man named John, back in 2016. We fell into a conversation about our lines of work. He told me how much he enjoyed his job. As a taxi driver, he got to meet the wonderful menagerie of humankind and find out their life stories—and be paid to do it, no less. And I described my day as a working astrobiologist: how I try to use instruments to detect the signs of living things on other planets, either their fossil remains, or the parts of cells that are alive and well today.

At the mention of extraterrestrial life, John glanced at me in the rearview mirror, a glimmer in his eyes. “I wonder,” he mused. “Could there be alien taxi drivers out there?”

At first the notion struck me as bizarre, even slightly ridiculous. But then I realized that it was a sweeping and rather profound question. His inquiry got to the heart of humanity’s undying fascination with “little green men” from the great beyond. Is it inevitable that some chemical soup on a distant world will always make the long and slow trek to becoming an intelligent creature driving a taxi? And why does this fascinate us?

Extraterrestrials have had an enduring pull on humankind for as long as we have been able to envision them. In the 16th century, Italian philosopher Giordano Bruno imagined planets with superior beings, orbiting distant stars. This heresy contributed to him being burned at the stake in 1600 by the Catholic Church. French writer Bernard Le Bovier de Fontenelle stirred the drawing rooms of 17th century Europe with his Conversations on the Plurality of Worlds, in which, over six moonlit evenings, a French marquise discusses intelligent life on the Moon with a philosopher friend.

Less than 100 years later, American astronomer Percival Lowell convinced himself that he could see canals on the surface of Mars; his now-debunked theory held that extraterrestrial engineers who were frantically working to save their cities from the desiccating encroachments of the Martian desert had constructed the waterways. Around the same time, English writer H.G. Wells published The War of the Worlds, about a Martian invasion on Earth. The heady mix of Lowell’s real (and speculated) observations and Wells’ interplanetary malefactors gripped the Victorian mind.

We have many pressing problems on Earth, from environmental challenges to a war in Ukraine. Why, then, do we get so easily distracted by the notion of elusive faraway creatures?

Today, we have far superior telescopes and spacecraft that can explore other worlds up close. We know much, much more about the composition of our solar system, down to the strange frigid methane seas of Saturn’s moon Titan and the details of the brown and red-mottled surface of Jupiter’s ice-encrusted moon Europa. And we’ve yet to find any Martians, or other type of space creature; if we do find life in our own solar system, we now know that it might be nothing more than microbial slime, with which there is no possibility of ever exchanging a word with—let alone hail a ride.

Still, the fascination with alien life has not abated.

Instead of artificial waterways, scientists now look for microscopic ancient fossil remains on Mars, scooping up rocks with vehicles such as NASA’s Perseverance rover, currently meandering across a primordial muddy delta once settled out from the waters of a vast lake. Astronomers also turn powerful telescopes toward distant planets orbiting other stars. The new James Webb Space Telescope, with its superlative powers of detection, can look for gases in those distant planetary atmospheres, such as carbon dioxide. In the future, advances in technology will allow us to search even further for the more difficult-to-detect oxygen gas, that by-product of the sunlight-capturing activity of plants and algae, a potential tell-tale signature of life in the cosmos.

Our popular culture is full of aliens too—from the adorable and vulnerable E.T. to the exquisite predatory malfeasance of Alien. Even the microscopic crystals of the Andromeda Strain, replicating in their insouciant and threatening way, having crashed to Earth in a satellite, managed to grip our attention.

My conversation with John, my taxi driver, got me thinking about why we unquestioningly consider the notion of alien life inherently interesting. When you really think about it, the extent of our excitement remains something of a mystery. We have many pressing problems on Earth, from environmental challenges to a war in Ukraine. Why, then, do we get so easily distracted by the notion of elusive faraway creatures?

Talking to countless people since, I’ve come to the conclusion that this fascination around extraterrestrials can’t be explained by the minutiae and details of the science. Nor is it some hope for companionship from space. None of us is that enthusiastic about being deposited on a desert island, spending the rest of our time in solitude, but I don’t think we worry about whether we might be stuck on desert island Earth.

So, if it has nothing to do with bamboozling us with science, or assuaging our loneliness, why do we want to find aliens?

The only answer I’ve been able to come up with is the ineffable sense of wonder they offer us. It’s a heady mixture of the familiar—the idea of living things, like us, grappling with their situation in the universe and the problems of existence—with the ethereal, the excitement of something unexpected, different, new, maybe a frisson of trepidation.

This may explain why, though we would all prefer an encounter with talkative aliens like you and me, we could also get excited about finding some humble microbes on a planet like Mars, just doing their thing in the dirt, trying to get by in their unconscious unthinking way. They, too, would offer some sort of contact with an unpredictable living entity.

That sense of wonder about what’s “out there” may offer us temporary reprieve from earthly problems, a type of escapism that prevents us being constantly swamped by bad news. And as we can all appreciate the interest in alien life, there may even be something of a coming together of human minds across cultures and nations when we all turn our eyes and minds to places and creatures beyond Earth.

I don’t know if any of us alive today will ever get to witness the exhilaration of humanity’s first contact with aliens. But perhaps we don’t need to. Perhaps the mere thought of creatures out there waiting to be contacted is enough to draw us out of our everyday concerns and fill us with that sense of innocent awe and anticipation of what the universe might teach us.