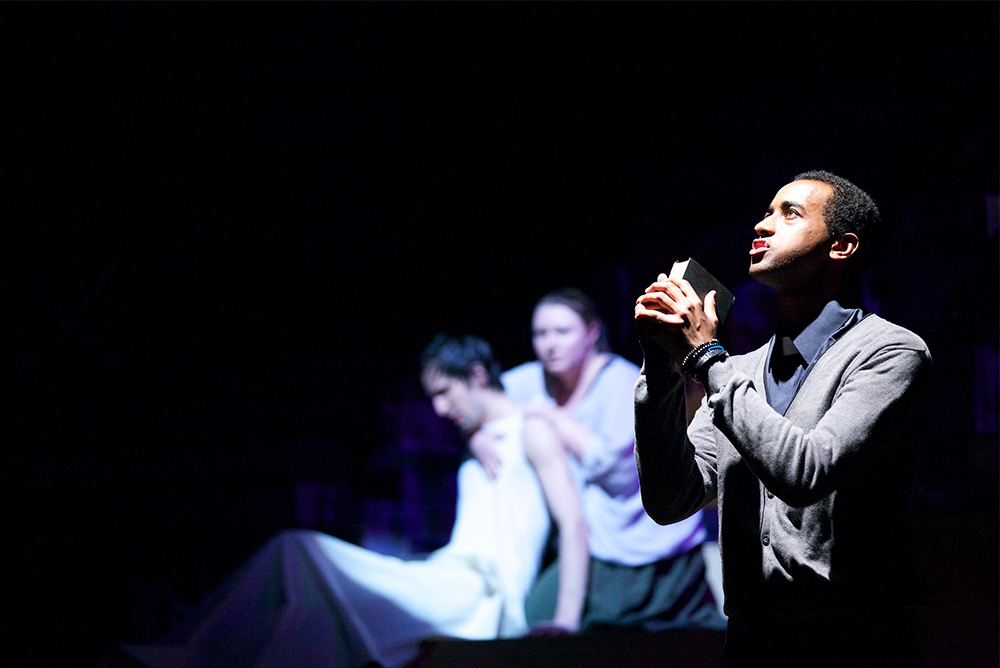 A production of Bertolt Brecht’s Fear and Misery of the Third Reich. “In the face of an avalanche of lies, how should the artist respond?” USC professor Oliver Mayer asks, looking to German playwright Bertolt Brecht to understand how difficult it is to write hard truths, and how the stage may offer a way forward. Courtesy of Lake Crimson/Flickr.

As we stare at a broken world, malignant and sense-deadening, what response—as thinking, feeling people—are we left to have? What action can we take? No matter who we are, it seems that we are stuck, our ability to make positive change stalemated, our governing system overheated thanks to the mounds of sand thrown into its gears over decades by prevaricators and other malefactors. Our hearts break at the seemingly daily list of purposeless tragedies at home and abroad, and our minds struggle with the magnitude of suffering, the sheer droning monotony of frequent exposure threatening to make us inured—accustomed to the worst of life and hardened into inaction.

We have become equally habituated to lies and falsehoods, to gaslighting and hot air and harangues against all who challenge a lie that’s passing as the truth. In our era of alternative facts and post-truth, it’s no wonder we are at loggerheads about what is true. Even phrases such as “We hold these truths to be self-evident” seem jejune.

In the face of an avalanche of lies, how should the artist respond for the sake of truth?

Nowadays, anyone who wishes to combat lies and ignorance and to write the truth must overcome at least five difficulties. He must have the courage to write the truth when truth is everywhere opposed; the keenness to recognize it, although it is everywhere concealed; the skill to manipulate it as a weapon; the judgement to select those in whose hands it will be effective; and the cunning to spread the truth among such persons.

This is the beginning paragraph from Bertolt Brecht’s 1935 essay entitled “Writing the Truth: Five Difficulties.” Nearly 90 years later, these words by the-greatest-playwright-of-all-time-not-named-Shakespeare take the fractured light of our own political and cultural moment of truth and come to life again.

Granted, not all of the essay stands the test of time. Written in Denmark, where Brecht lived for six years in exile after fleeing the rise of Hitler, much of the essay feels stuck in its own particularities. But if its factual correlations were removed, or replaced with examples from our own time and world, might the essay still hold true? Brecht observes that the “Five Difficulties” “are formidable problems for writers living under fascism, but they exist also for those writers who have fled or been exiled; they exist even for writers working in countries where civil liberty prevails.” Post-January 6th, with a weaponized, extremist Supreme Court of the land and civil disunion growing seemingly every day no matter what we do, our civil liberties are drying up like Lake Mead in front of our eyes. My Brother’s/Sister’s Keeper? Not bloody likely.

The problem with writing the truth, as Brecht explains, is that not all truths are created equal. There are general truths that confer importance; platitudes about the triumph of the human spirit or the wickedness of the world may be momentarily intoxicating, but they don’t do a lot. Such lower-hanging fruit might seem ripe for telling, since harder truths are never easily ascertained. Facts demand study and thought, and can be hard to unearth because they are often and everywhere suppressed. That is neither general nor easy. Such truths grow high on the tree—high enough to break your neck. And according to Brecht’s thesis, these harder truths are written to produce a result—or even better, an action—in someone else’s life.

Sometimes a play is not just a play, but a kind of Trojan Horse for change.

The prevaricators of Brecht’s time and ours have an intense dislike for significant change. “They would like to see everything remain the same—for a thousand years if possible,” Brecht writes. “They would love it if sun and moon stood still.” It takes quite a bit of courage “to speak truth to power”—a phrase coined by the great Bayard Rustin to describe the battle for civil and gay rights and against the hard truths of our own American shamelessness and treachery—and it demands just as much keenness as ever from the artist to recognize the truth amidst the stress of a million constant distractions, siren songs, and insincerities. The writer must indeed manipulate the truth as a weapon, if for no other reason than to fight back against the thousand cuts of bald-faced lies we receive every time we open our device of choice.

Although there is a not-so-hidden pejorative in the word, manipulation more positively translates as choreography—composing a sequence of steps and directing the elements to produce a desired effect. Weaponizing the word gives it a martial spin, as in developing the proper stance to deliver a blow. But we all know that it will take more than one good punch to fell the heavyweight champion of lies that reigns over our time.

But to convey the truth in an active way, one needs not just deftness but cunning. An invention is necessary: a devised machine engineered to speed the process of an action, designed to spread truths in novel ways around obstacles and past the difficulties of widespread falsehoods, using ingenious methods that appeal to each person’s sense of what is unjust. Injustice generates the force of the current.

Plays are staged actions awaiting the response of real people. Almost every time, the general response is the expected ovation (seated or standing), followed by the drive home and the invariable drink or two before bed and the promise of a new day. But, when the play or playwright is special, the on-stage action causes reactions that far outdistance simple entertainment. Sometimes a play is not just a play, but a kind of Trojan Horse for change.

Plays are constructs, vessels to fill with the intention to take us places. The truly amazing thing about them is that the creator is never quite sure whether their intentions will be fulfilled or not, and the viewer/reader can only watch as the play will either meet their expectations or reverse off them. Certain truths are indeed self-evident in the play, but the harder truths are by needs up in the air—open-ended, contingent on where we stand and what’s at stake in our lives.

That is possibly where the mysterious nature of plays factors in—namely, their prismatic ability to bend the light of the moment and to mean more than the sum of their parts. Though Brecht was dogmatic in his politics, his plays (by nature of being so very good) refuse to fly under any one flag. The free will he cannot help but give his characters fights against dogma, and the copious amounts of suffering and poverty he pours upon his protagonists inspire compassion, empathy and understanding from his audience. The larger human truth shines through the slant of action in Brecht’s dramatis personae, as they would in any really good play. Among many other reasons, his greatest characters ring true because they are agents of change.

When in The Good Person of Szechwan the good Shen Teh is forced to mask her identity, splitting not only her values but her personality and gender, in order to survive a decidedly godless world, or when Galileo, in the eponymous play, is publicly forced by the Inquisition to recant his scientific discoveries and destroy his reputation yet secretly smuggles out his new book for dissemination abroad, both characters are engaging in active and soul-killing betrayals of their society and their own hard-won identities. But not all betrayals are created equal in a changing world. Does betraying the betrayer—even if it’s you—get the truth past the gatekeepers? Both Shen Teh and Galileo are willing to take the chance.

While Brecht’s essay “Writing the Truth: Five Difficulties,” provocative as it may be, gets stuck in its historical correlatives, Brecht’s plays are free to make new connections and sever old ones, as need be. Their very dramatic choreography demands that they balance militancy with strategy as the world changes all around them. Brecht’s essential political point of view may not change, but—because of the cunning of their artistry, more cunning than even their creator could control—his characters’ interactions constantly pick up or slough off the lived experience of their audience, then and now. In their moments of ignominy, the characters seem to lose everything yet gain hard-won knowledge that they pass to us, if we’ll take it. They don’t resemble us, and we wouldn’t want to be them—yet we are.

A world away, a very different writer and revolutionary wrote:

Emily Dickinson knew what Brecht was searching for—that there’s a certain slant of light that reveals the truth. Perhaps, the slant itself is where the truth lies. And perhaps, despite the myriad difficulties, the truth’s superb surprise is only an invention away.