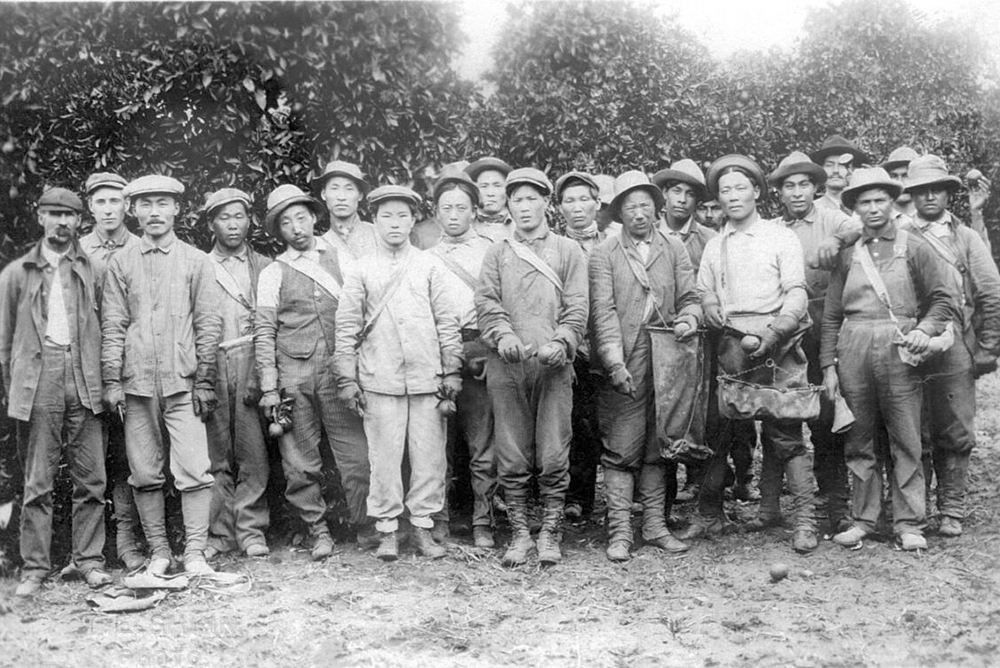 Anh Chang Ho and others work in an orange orchard in citrus-rich Riverside, California, site of the first Koreatown in the United States. USC professor Edward T. Chang and researcher Carol K. Park spotlight the forgotten history of Pachappa Camp where the bustling community lived in the early 1900s, and which served as a gathering place for Korean Americans fighting for nationhood abroad. Courtesy of Korean American Digital Archive, USC Korean Heritage Library.


How did we forget about the first Koreatown, USA?

In the early 20th century, Korean Americans flocked to Pachappa Camp in citrus-rich Riverside, California, to gather, live and work together, and keep the Korean identity alive. During its short stretch of existence, this self-governed community made for and by Korean Americans became a mecca for the Korean independence movement and a bulwark against anti-Asian racism in America. But Pachappa Camp’s significance was forgotten about until the early 2000s, when students at the University of California, Riverside, located the camp’s name on an old map. Intrigued, Edward—a Korean American studies scholar—and a team of researchers and students dug through archives of Korean newspapers and historic documents to uncover an amazing tale of survival and perseverance.

In 1902, the first married Korean couple to come to the United States, Dosan Ahn Chang Ho and Heyryon Lee, also known as Helen Lee Ahn, arrived in San Francisco. Dosan (his pen name) was a Korean independence activist who had made the voyage, in part, to learn about democratic ideals. At the time, Korea was struggling to remain an independent nation. Activists like Dosan were looking for ways to preserve Korea’s sovereignty as an empire and a monarchy, and prevent Japan from taking over their homeland.

The couple eventually settled in Riverside, enticed by its warm climate and job opportunities- not to mention its burgeoning Korean population. Once there, Dosan founded a Korean labor bureau, which offered economic opportunities to entice more Koreans to come to Riverside. As more came to the area, Dosan got started on creating a Korean community all their own: Pachappa Camp.

Located at 1532 Pachappa Avenue next to a railroad track, Pachappa had previously been the site of a labor camp for Chinese railroad workers. When Dosan founded the camp in 1905, it consisted of about 20 vernacular, single-story, wood-frame buildings, in addition to a one-and-a-half story community center duplex. At first, living conditions were harsh: In her memoir Quiet Odyssey: A Pioneer Korean Woman in America, Pachappa Camp resident Mary Paik Lee recalled the cold and lack of amenities, including no running water or electricity, in the “shanties.” But even from the start, Korean Americans flooded the site with warmth and welcome. They built a community hall, held Korean language and culture classes, and the Calvary Presbyterian Church, which took an interest in the diaspora, provided English classes.

Pachappa Camp’s residents were a people fighting for their rights in both their home country and their new country.

When Pachappa was founded, Korean Americans found themselves suddenly a people without a country. That same year, in 1905, Japan annexed Korea under military rule; by 1910, Korea was officially folded into Japan’s empire. Pachappa, in response, became an active site of Korean independence activities led by Dosan himself, who continued to distinguish himself as a leader of the movement that sought to unify overseas Koreans to preserve their national identity and community. Many came to refer to Pachappa as “Dosan’s Republic” because of the community regulations he implemented and the independence organizations he started there. The most significant of them was the cooperative association Gongnip Hyeophoe, which laid foundations for the development of the Korean National Association (KNA)—a political organization that represented the interest of Koreans in the United States, Russia, and Manchuria.

In 1911, the KNA hosted a major 10-day conference at Pachappa, where chapter presidents from around the United States laid out the principles that would go into the founding of the Republic of Korea 37 years later. KNA members agreed on 21 articles of governance for Koreans, including guidelines on social practices, internal policing mechanisms, and the establishment of committees that helped organize and regulate Koreans on everything from the way they dressed, to curfew times.

Throughout Pachappa Camp’s existence, residents continued to agitate for Korean independence. When Japan’s Prince Ito was assassinated at the hands of Korean nationalist Chung-kun Ahn, camp residents collected funds for Ahn’s defense and held nightly meetings full of speeches, promises, and stories of past heroics to express their support. Anecdotally, one married couple even pledged a horse and buggy to the cause—though the wife took her husband to task for his generosity afterward. But such a protest would have been half-hearted; everyone in the camp was aligned in support of Ahn.

Pachappa Camp’s residents were a people fighting for their rights in both their home country and their new country. Asians were the first minority community to be targeted specifically by U.S. immigration laws, beginning with the1882 Chinese Exclusion Act. Pachappa Camp residents experienced the rampant anti-Asian hatred that permeated the country firsthand. Lee, in her memoir, recalled how other students sang racist songs toward her at school. Jacob Thun, another resident and child at Pachappa, wrote about being ridiculed for his racial identity and called slurs like “Jap.” The Riverside Daily Press also reported on anti-Asian hate crimes and other incidents—an article in early 1906 titled “Villainous Spite Work,” for example, reported on five Korean boys whose bicycle tires had been “slashed to pieces.”

Still, Pachappa Camp maintained its robust community and resilience. Korean newspapers noted that residents continued to conduct Korean independence movement meetings and cultural classes, hold weddings, and generally operate as an extension of Korea. Pachappa likely would have continued to flourish had it not been for the 1913 Great Citrus Freeze, which decimated crops and forced laborers to leave Riverside. Over the next five years, the camp’s numbers dwindled until Pachappa finally closed in 1918. But its influence lived on long past its end, with former residents spreading the spirit of Korea’s independence movement with them wherever they went, whether it was to nearby Vine Street, up north to the Bay, or down south to Los Angeles.

Almost exactly a century after its closure, in December 2016, the city of Riverside formally recognized Pachappa Camp as its first Point of Cultural Interest. On March 23, 2017, the city celebrated the designation. Among the attendees was Dosan’s youngest son, Ralph Ahn.  “Pachappa Camp was the site of the First Organized Korean American Settlement founded by Dosan Ahn Chang Ho in 1905” announces the sign commemorating the first Koreatown, USA. The sign and the designation—coming thanks to the research of Edward and his colleagues—ensure that Pachappa Camp itself, its role in the Korean independence movement, and its place in Korean American history will not be forgotten again.