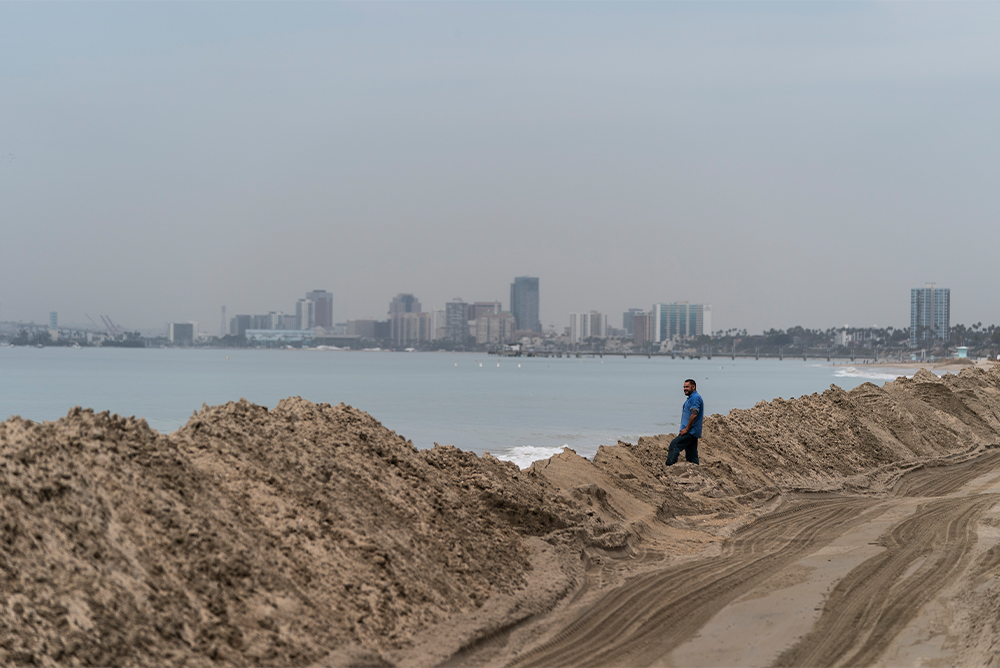 Appearing on the ballot this November—and facing notable opponents like Governor Newsom and the California Teachers Association—Prop 30 seems unlikely to pass. But it may signal a new era of prioritizing climate change, argues columnist Joe Mathews. Courtesy of AP Newsroom.

Will the fight against climate change finally force the replacement of California’s broken governing system?

That’s the most interesting question posed by the most interesting measure on this November’s statewide ballot. Prop 30 might be dismissed as just another attempt to raise taxes. But it actually represents the launch of a new political era. We’re watching the beginning of an existential contest between the urgency of the 21st century climate crisis and the endurance of the state’s dysfunctional 19th century constitutional order.

As such, Prop 30 reveals the real nature of power in California, and the fact that most significant political divides here exist within the progressive and environmental movements.

On one side of Prop 30 and this divide are the measure’s supporters, who might be called the destructionists- progressive Democrats willing to play hardball with erstwhile allies and wreck the governing system to address climate change. On the other side are institutionalists—the progressives who have the most power in the current system, such as the governor and potent public employee unions like the California Teachers Association. In opposing Prop 30, institutionalists also align with leading defenders of California’s Prop 13-based tax system such as real estate interests and the Howard Jarvis Taxpayers Association.

This contest—over Prop 30 and many measures likely to follow—will decide whether the climate crisis can be addressed within the current system, which bakes its complicated and inflexible formulas for taxes, budgeting, and decision-making into an overly long constitution. The alternative: Climate forces California to remake its constitution and create a brand-new system of governance.

Proposition 30 proposes changing state law to raise taxes on high-income earners—1.75 percent on individual annual income above $2 million—for the next 20 years. According to the nonpartisan Legislative Analyst’s Office, such a tax would generate revenues fluctuating between $3 billion and $4.5 billion each year. Prop 30 would dedicate that money to a complicated mix of programs addressing two large sources of greenhouse gases: transportation and wildfires. Importantly, that includes providing additional subsidies for the purchase of electric vehicles and for charging infrastructure.

All that may sound straightforward and attractive to Californians who are worried about climate change- and who don’t understand our state’s complex governing system.

But in context of that system, Prop 30 looks like more disease, not cure.

It’s questionable as tax policy, since it increases the state’s dependence on the highest earners, adding to the system’s volatility and unpredictability.

Prop 30 reveals the real nature of power in California, and the fact that most significant political divides here exist within the progressive and environmental movements.

It’s abominable as budget policy. It uses inflexible formulas to lock up billions of tax dollars in special accounts that can’t be touched for the state’s core functions: schools, healthcare, prisons, and emergency response. Indeed, Prop 30 makes repurposing any of that money a crime. It also restricts money for audits, thereby limiting oversight.

These provisions are noteworthy, because Prop 30 is also a bank robbery: In essence, the measure’s chief funder, Lyft, is conducting a raid on the state treasury as audacious as the casino heist in Ocean’s 11. Under current state law requiring a shift to electric vehicles, ride-sharing companies like Lyft will likely have to spend a great deal of their own money helping their drivers obtain electric vehicles. Prop 30’s subsidies would mean that taxpayers cover more of Lyft’s costs in this transition.

Prop 30’s many flaws seem likely to sink its chances, especially with a slew of opponents including Gov. Gavin Newsom, who is appearing in TV ads against it. But the measure’s audacious awfulness also is compelling, making a case for putting climate first and signaling the shift to this new era.

Prop 30 demonstrates that California’s environmentalists no longer want to be loved, or thought of as allies of good government. Instead, our greens—including Prop 30 backers Clean Air California, California Environmental Voters, and leading environmentalist politicians like Fran Pavley—are unapologetically putting on the black hats. They are willing to fight allies, wreck coalitions, and pick Hobbesian fights against other progressive interests.

And if the climate threat is truly existential, they may well be right.

Prop 30 says that those fighting climate change don’t need your love. They need money and action. They have no time for political pablum about California’s global climate leadership- a claim that even California’s assembly speaker has acknowledged is nonsense. And they can’t wait anymore for small measures, like the long-fought gas tax hike of recent years. The data and the climate science say 2030 will be too late.

With such ruthless urgency behind it, Prop 30, whether or not it gets a majority in November, already is a winner. On the defensive, Newsom rushed through a new package of climate legislation and investments late in this summer’s legislative session. Now he is touting his $54 billion California Climate Commitment and pledging more. “We are not only doubling down, we’re just getting started,” he says.

Of course, the people behind Prop 30 may just be getting started, too. Win or lose in this vote, they seem likely to come back with measures that are even more aggressively awful—because that’s what they have in their toolbox, in California’s current era.

If there’s anything wrong with Prop 30, from a climate crisis perspective, it’s that it’s not urgent enough. It doesn’t take enough in taxes from enough people to make every vehicle electric in this decade rather than future ones. It doesn’t remake the budget enough to make climate our true first priority.

So while Prop 30 backers have already gone too far for the taste of the governor and the teachers’ union, they’ll soon learn that they have to go much further. They’ll recognize that California’s 19th century governing system is simply too old and inflexible for the rapid social and economic transformation the climate crisis requires.

What will they do then? Prop 30 shows they have some nerve. But do they have nerve enough to tear up the state’s tax and budget systems? Or give us a new constitution?

Because Californians face a choice: save the climate or save our strange system of government. We can’t do both.