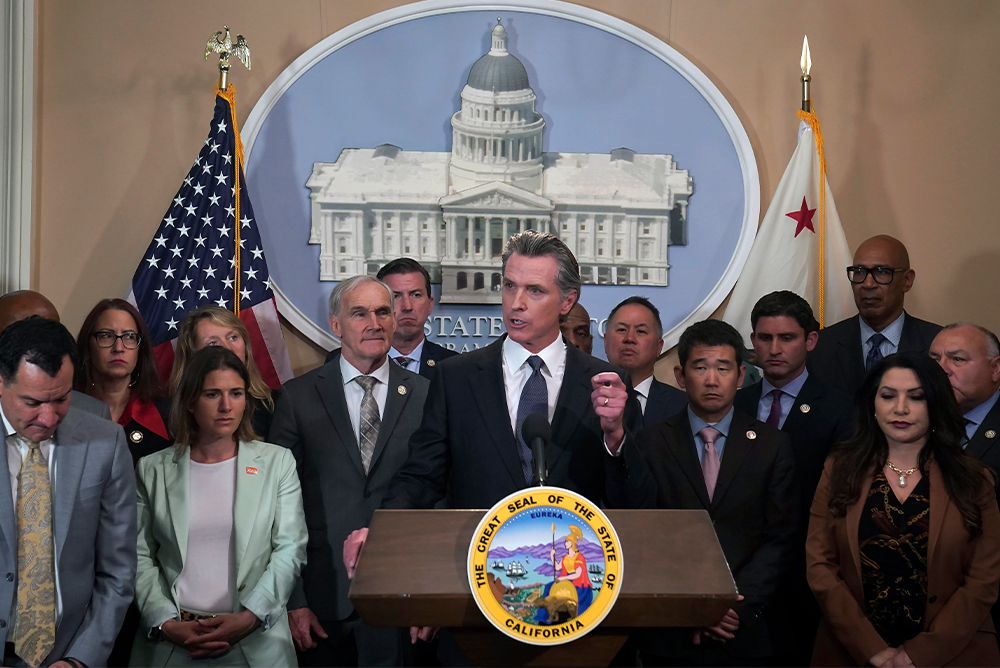 Whether Gavin Newsom's putting up pro-choice billboards or banning travel to LGBTQ-unfriendly states, his forays into the culture wars are ruining his national ambitions, argues columnist Joe Mathews. Courtesy of AP Newsroom.

If former President Trump, Florida Gov. Ron DeSantis and their followers are going to create space for hate and human rights violations, then why should anyone complain about California Gavin Newsom using his power to create spaces that protect the rest of us?

That’s the question that should be posed to California media and politicos who have responded with knee-jerk cynicism to Newsom’s many interventions on behalf of Trump’s targets.  These pundits describe the governor’s forays into national disputes over abortion, immigration, and LGBTQ rights as political ploys—performed in service of presidential ambitions.

The truth is the exact opposite. Whether he’s trumpeting a maximalist pro-choice stance on abortion on out-of-state billboards or banning state-funded travel to places that are unfriendly to LGTBQ people, Newsom is in fact throwing away whatever slight chance he might have had of being president.

Getting elected president, if you’re a Democrat, is about making friends with powerful Democratic players, soft-pedaling divisive issues, and building broad, diverse coalitions. That’s how Barack Obama and Joe Biden won the White House. But Newsom’s constant blasts into cultural politics divide the country and make him enemies.

Sure, picking fights with Trump and like-minded governors may be good politics. But Newsom is also calling out national Democrats, including Biden, for not being combative enough. (The president, in a bit of payback, recently put Newsom in a jam with labor interests.)

Newsom and his political advisors must know that these battles over social issues would hurt his chances, particularly in battleground states like Arizona and North Carolina (to which California banned state-funded travel). The real story is why Gavin Newsom, of all people, is engaging in acts of political self-sacrifice now.

I think there are three possible explanations—two that are peculiar to our very peculiar and poorly understood governor, and one that stems from California’s growing estrangement from the United States.

The real story is why Gavin Newsom, of all people, is engaging in acts of political self-sacrifice now.

The first explanation is that Newsom simply can’t help himself.

The governor has always lacked discipline, ignoring basic rules of political communication. While he may look like the politician from central casting—tall, handsome, the styled hair—he is a campaign consultant’s nightmare.

He uses three big words when one short one will do. He’s often the best witness against himself, volunteering arguments against his own policies. He uses too much detail—going on like an overeager waiter at one of his restaurants, insisting on telling you about all the specials, when you wish you could just order. Newsom’s self-indulgence sometimes has verged into personal recklessness—this is a man who had an affair with a top aide’s wife, and dined maskless at the French Laundry during the pandemic.

That is the ugly side of Newsom’s undiscipline. But there is an admirable side to it, too—which leads me to the second explanation. While wise politicians try to avoid fights and fierce criticism, Newsom has a tendency to jump into disputes, and draw fire to himself. Why? I can’t read his mind or put this child of divorce on a psychiatrist’s couch. But, reviewing his record and his speeches, I’ve concluded that Newsom often jumps in to take fire when he feels someone needs protection.

Just go back and look at his endless budget press conferences—I dare you—where he explains almost every expenditure in the language of defense. He is constantly protecting—the climate, the environment, the homeless, children, this community, that interest group.

This protective instinct is why he’s jumped into national politics. If media and Democrats are going to give the Trumpists space to spew hate and nonsense, attack democracy, and pull stunts that spread fear among women and immigrants and gay people, how can he sit on the sidelines?

His recent decision to place billboards—paid for with his own campaign money, in seven states that have eliminated abortion rights—is a perfect example of the Newsomian mindset. The boards tell women that California will protect their right to bodily autonomy and to abortion (and provide a state website, abortion.ca.gov, where they can find out more). If such boards turn off voters in Ohio and Florida—people that a Democratic presidential contender will need someday—so what?

Let me be clear: these interventions don’t make Newsom a hero. Here at home, his national blasts are good politics, feeding his base. And contrary to The Atlantic, which suggests that Newsom’s national forays are designed to avoid his duties to Californians, the governor’s national fights actually help him do his job here. How? By keeping him in the spotlight, which has allowed him to make a public case for his wildly ambitious agenda of new policies and programs in healthcare, child care, housing, and homelessness.

But Newsom’s progressive California supremacy is poison in the other 49 states, where Americans sadly can’t accept the truth that we Californians really do know better.

That’s one reason why Newsom is not sacrificing that much when he throws away any White House prospects he might have had.  A Californian doesn’t have much chance at the presidency anyway, much less a Californian with Newsom’s baggage. And Newsom is demographically wrong for a Democratic party that desperately needs to nominate more women and people of color.

But Newsom is perfectly cast to call out while male political bullies and call in his fellow Democrats.

And who knows? While he’ll never be president of the United States, he still could lead a nation someday. If our state and the rest of the country continue to grow apart, it’s not hard to imagine Newsom as the first president or prime minister of an independent California Republic.