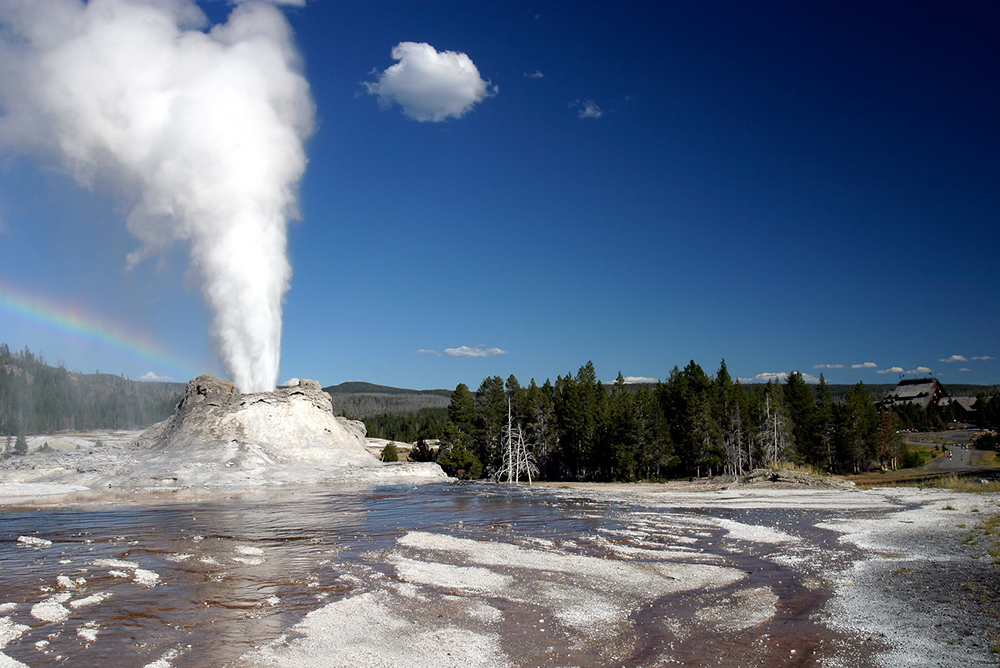 Historian Adam M. Sowards traces the impact of two 1872 environmental laws on the national landscape and questions: "How can we square Ulysses S. Grant’s contradictory imperatives—to protect the natural world at all costs versus to exploit it without concern?" Courtesy of GPA Photo Archive/Flickr (CC BY 2.0).


If you know where to go in Death Valley National Park, Wrangell-St. Elias Park and Preserve, Glacier Peak Wilderness, or Bears Ears National Monument, you might come across the remnants of a tramway or a pile of mine tailings or a rusted tank. The artifacts of industrial activity can be startling in the otherwise tranquil natural scene. But there is no mistake. Despite being miles inside a national park, a designated wilderness, or some other conservation area, you can encounter mining claims—they are everywhere. With resource development on public lands once again a matter of national debate, it has become increasingly important to look back and ask: How did protected places and mining get so entangled?

One hundred and fifty years ago, Congress established two foundational precedents for our national landscape a mere 10 weeks apart: the Yellowstone National Park Act, setting in motion “America’s best idea,” and the General Mining Act, which opened public lands to mining exploration. Between March and May, it seems, President Ulysses S. Grant swung from one apex of the pendulum to the other, making it impossible to settle and privatize the public land in Yellowstone while making it easy to extract valuable minerals from almost anywhere they were found without paying a cent. While these decisions seem diametrically opposed, they have shared priorities that ushered in a new land regime in the U.S., based on a fundamental notion of American land defined by a history of Native expropriation, economic liberalism, and segregated land uses.

On March 1, 1872, President Grant signed the Yellowstone National Park Act. It “set apart as a public park or pleasuring-ground for the benefit and enjoyment of the people” some two million acres in the northwestern corner of Wyoming, leaning just a bit into Idaho and Montana. In this remarkable landscape of geysers and bison and bright sulfuric pools, no one was permitted to settle or occupy the land. The resources—timber, minerals, and the like—were to be kept “from injury or spoliation” and all natural spectacles would be retained in “their natural condition.” No “wanton destruction” of game or fish “for the purposes of merchandise or profit” would be permitted.

But on May 10th, President Grant enacted a bill that has facilitated wanton destruction across many of the country’s public lands and created massive wealth for a few. The General Mining Act of 1872 declared all the U.S. public domain where valuable minerals might be found to be “free and open to exploration and purchase.” This legislation legitimized mining on all surveyed or unsurveyed lands for personal or corporate gain. (The mining that preceded it, such as the California Gold Rush of 49er fame, was simply overlooked trespassing.) The law remains in effect, an emblem to the exploitation of natural wealth for profit as the highest possible good assigned to the natural world.

How can we square Ulysses S. Grant’s contradictory imperatives—to protect the natural world at all costs versus to exploit it without concern?

Both laws thrummed with the cadence of dispossession. From the earliest days of the republic, the nation’s land policy was to take from Indigenous peoples—by war, by treaty, by duplicity or fraud, it did not matter—and then transfer into the private hands of yeoman farmers producing food and virtue on homesteads scattered across the continent. These 1872 laws were partly made possible by the fact that the federal government had ended treaty-making in 1871. Underneath the seemingly empty “pleasuring-grounds” of Yellowstone were the forced absences of Apsaalooké and Shoshone peoples and many other Indigenous Nations in Yellowstone and subsequent public parks.

Similarly, the great mineral rushes, both before and after the 1872 law, routinely invaded Indigenous territory, often in explicit violation of treaty agreements. This stripped land, wealth, and health from Native peoples and provoked ongoing violence, exemplifying a common North American story. The 1872 laws made land either a museum or a sacrifice zone, not a place to live. National parks—and later, national forests, monuments, grasslands, or wildlife refuges—and mining sites, once Native homes, quickly redefined those residents as trespassers.

Both laws also hailed to corporate boards. The Northern Pacific Railroad’s tracks were not laid down yet, but the route took it near Yellowstone’s northern boundary. Like many of the transcontinental railroads, the Northern Pacific faced financial trouble and guarded its territory fiercely from competition. Jay Cooke, the head of the company, saw the possible park as a future revenue stream, and used his influence to encourage Congress to create the park, further entangling corporate interests with national parks.

The General Mining Law benefited entrepreneurial and corporate development in a much more straightforward way. Obtaining land for mining was simple: locate valuable minerals; claim and take them. If they wanted, the mineral developers could also pay a low fee of $2.50 per acre for placer claims and $5 per acre for lode claims to buy the land. These easy terms conformed to a guiding belief of nineteenth-century economic liberalism- that the government was supposed to facilitate economic development (and then stand back). The federal government and U.S. taxpayers receive no royalties from the minerals subject to the mining law. Over the next century, an area almost the size of Connecticut dropped into private hands on the cheap. Although popular culture depicts a lone grizzled man with a mule and a pan bent over a creek, mining looked much more like underpaid workers with drills rat-a-tatting in the deep dark of western mountains.

In contrast to the conservation and recreation opportunities offered by the creation of the national parks, the General Mining Law brought about major environmental harms, including terrible waste, and continues to do so. Although few large-scale hardrock mining operations have launched in recent decades, 100 million acres of public land can still be explored and, if minerals are located, the process of claiming and taking them is largely the same as it was in the 1870s. Though Congress put a moratorium on patenting the claims in the 1990s, ending outright ownership, extracting minerals does not require land ownership- and mining claims close off the lands to other uses.

Meanwhile, environmental regulations and the bonds posted to support reclamation often are insufficient. To date, more than 50 billion tons of waste have been left behind after mining and processing, harming all manner of lakes and lands surrounding mines. The law’s rare reforms include a leasing system for some resources (like coal and gas) and improved environmental remediation. But the General Mining Law enjoys strong allies in resource-dependent congressional districts who have resisted the few calls for fundamental reform, such as fair royalties and a fund to clean up abandoned mines, that have popped up from time to time.

How can we square Ulysses S. Grant’s contradictory imperatives—to protect the natural world at all costs versus to exploit it without concern? In addition to the way both laws alienated land from its original inhabitants, they reveal a fundamental idea that animates American culture and law: that land is meant to be owned or controlled. From that perspective, tonnage and tourism, price per ounce and entrance fees, show themselves as simply different forms of commodification. While open-pit mines differ from the Grand Canyon of the Yellowstone River, both require, according to the prevailing ethos, an owner or management goals approved by Congress.

One hundred and fifty years later, we find it hard to conceive of any other way. People have inhabited the continent since time immemorial, but this system is only a century-and-a-half old: Change is possible.