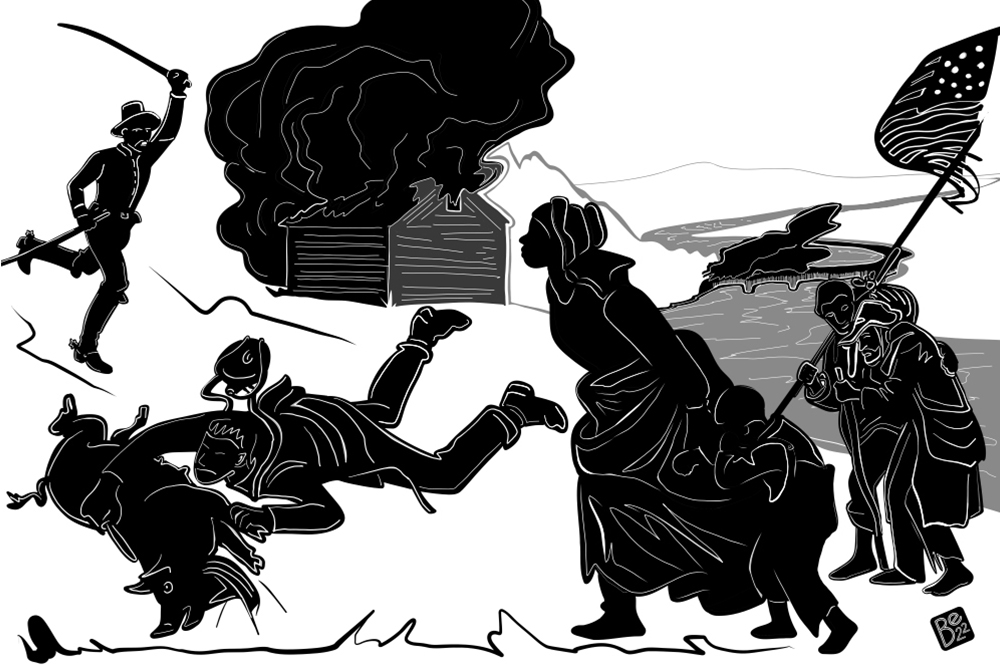 Historian Bennett Parten traces an oft-forgotten story from U.S. General William T. Sherman’s march through Georgia in 1864: the incident at Ebenezer Creek where the American case for reparations began. Illustration by Be Boggs.


Americans get Sherman’s March all wrong. Ask anyone who’s seen Gone with the Wind, and they’ll tell you that U.S. General William T. Sherman’s roughly 250-mile march from Atlanta to Savannah marked the swan song of the Confederacy. They’ll recall the burning of Atlanta, a panoramic scene in the film that made cinematic history, and they’ll regard Sherman as most Georgians still do, as the man who laid waste to the state by slashing and burning his way to the coast.

But this story of fire and arms obscures an arguably more important story: Sherman’s famous March doubled as the largest emancipation event in American history, accomplishing on the ground what Lincoln’s Emancipation Proclamation could do only on paper. It broke the back of the planter class, destroyed Confederate morale, and legitimized the freedom of thousands. And it’s here, deep in Georgia, along a slow-moving body of water known as Ebenezer Creek, where the American case for reparations began. This oft-forgotten origin story is one of the lasting legacies of Sherman’s great March, even if it’s also perhaps the least understood.

From the moment Sherman moved his men out of Atlanta in November 1864, enslaved people fled plantations to meet the soldiers—arriving day and night, as families or as lone escapees. Some made long, circuitous journeys. Others met the marchers right in front of large plantation homes. All acted as a force that propelled Sherman’s army forward. They pointed the way to hidden plantation treasures; they directed soldiers down clandestine footpaths through the woods; they supplied Sherman and his scouting parties with critical pieces of military intelligence. Formerly enslaved people also worked for the army as cooks, valets, or pioneers (a military term for road builders or ditch diggers). Some even lined the roadsides and cheered on the army as it marched past.

Many of the formerly enslaved people who ran to the army went a step further: They decided to follow the army, as refugees, in an effort to make their freedom more secure. Freed refugees had attached themselves to federal armies in other theaters of war but never on a scale such as this. Sherman would later speculate that by the time his army arrived in Savannah, as many as 20,000 freed refugees from slavery followed in its wake; many thousands more may have marched along before turning back somewhere along the way. If true, this number is astounding: 20,000 nearly matched the pre-war population of Savannah, antebellum Georgia’s largest city. 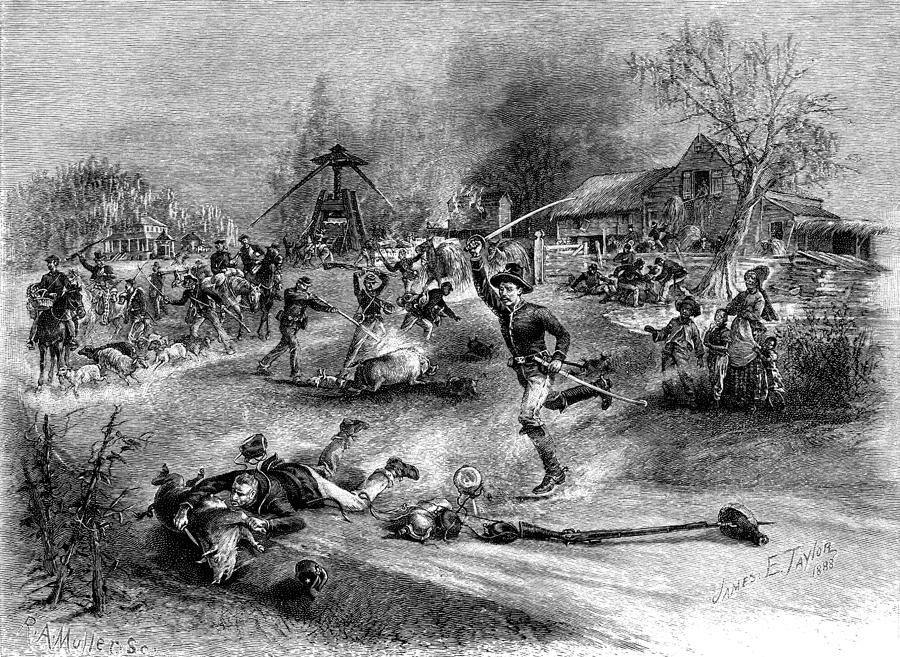 Sherman’s famous March through Georgia broke the back of the planter class, destroyed Confederate morale, and legitimized the freedom of thousands. Courtesy of Wikimedia Commons.

The army arrived at Ebenezer Creek, just 20 or so miles from Savannah, in early December 1864. As the lines pulled up to the bank and began building a temporary bridge across the water, Commander Jeff C. Davis of Indiana, the head of Sherman’s 14th Army Corps, ordered his men to hold the refugees back. Once his column came across, they pulled the bridge up; some reports say the soldiers burned it for good measure. Davis had pulled up temporary bridges before, but each time, the refugees had managed to make it across. But at Ebenezer Creek, a band of Confederate cavalry swung up from behind, causing chaos to break out on the bank. Freed men and women raced into the water. Shrieks and screams and bullets ripped through the air. And in the end, few made it to the other side. Many drowned. Others were either struck down during the attack or captured and re-enslaved. Blood was in the water—and all over the hands of the U.S. army.

The incident at Ebenezer Creek hung over the March, even as the army succeeded in taking Savannah some two weeks later. Survivors among the formerly enslaved mourned loved ones and wore the trauma of the crossing in the threads of their dampened clothes. The crossing soon became part of an emerging narrative of the March: that the army had shirked its responsibility for pursuing emancipation.

Nearly a month later, in the late evening of January 12, 1865, Sherman had to answer for what transpired on his March. He found himself sitting across from 20 of Savannah’s leading African American ministers. They had come to Sherman’s Savannah headquarters to discuss “matters relating to the freedmen of the state of Georgia.” Sherman and the Secretary of War, Edwin Stanton, called the meeting to resolve the refugee crisis now engulfing Savannah but also to quell reports that the army turned its back on the refugees. The meeting, however, quickly evolved into something more. It became a discussion about what emancipation would actually mean—and reparations played a role. As the lamp light dimmed low, the group’s chosen spokesman, Garrison Frazier, a man who had purchased his own freedom, offered a vision of freedom based on Black landownership. “The way we can best take care of ourselves is to have land, and turn it and till it by our own labor,” he said, before affirming, “We want to be placed on land until we can buy it and make it our own.”

Many of the formerly enslaved people who ran to the army went a step further: They decided to follow the army, as refugees, in an effort to make their freedom more secure.

Within days, Sherman responded. He announced his Field Orders No. 15, a military injunction that set aside a large strip of land exclusively for Black landowners. The land, which ran inland for 30 miles from Charleston, South Carolina to Jacksonville, Florida, was to be divided into 40-acre plots; a separate order mentioned giving freed families the army’s “partially broken down” pack animals. Here lies the likely origin of the famous phrase “Forty Acres and a Mule.”

The orders represented the most drastic escalation in Reconstruction policy to date. It was, in effect, a formal mandate from the federal government to requisition Confederate property, redistribute it to freed families, and provide the startup materials needed to make something of it. This may not have been intended as reparations per se, but to those on the ground, it was an important start.

In his essay collection The Souls of Black Folk, W.E.B. Dubois wrote that the “vision of ‘Forty Acres and Mule’” was destined for “bitter disappointment.” But for a brief moment, freed families claimed land as their own. New communities formed as self-governing “colonies.” And everywhere, men and women began to build new lives outside of slavery on the promise the Special Field Orders provided.

Sadly, this moment wouldn’t last. Shortly after the end of the war, President Andrew Johnson—Lincoln’s successor—began pardoning thousands of ex-Confederates, and invoking the widespread restoration of their property. One by one, freed people that had settled on homesteads within the “Sherman Reserve”—some 40,000 families stretched across 400,000 acres—lost their land to returning planters and ex-Confederates. The window for meaningful land reform closed about as fast as it opened.

Ever since, the idea of “Forty Acres and a Mule” has lived on as a symbol of America’s broken promise to Black America—a first, albeit unfulfilled, step toward righting slavery’s wrongs.

Yet while “Forty Acres and a Mule” represents an important precedent and a broken promise, we’d do well to remember that it also represents a basic, concrete fact of history: Sherman felt compelled to issue his Special Field Orders No. 15 because thousands of freed refugees from slavery had followed his army, and it was their being there—advancing the war effort and advancing their own freedom—that effectively forced him to issue the order. He had been backed into a corner and had a debt to pay. Thus if “Forty Acres and Mule” was a federal promise, it was also a promise trammeled into place by the thousands of freed men and women who followed the army and transformed Sherman’s March into a march for their own liberation. No one represents this movement more than those swept away in the dark waters of Ebenezer Creek.

Societies deal with the past by choosing which stories to tell—and when it comes to slavery, Americans have often told few, if any, stories at all. We have pretended, instead, that slavery’s past is too overwhelming, too historically vast, for us to process—and thus, to atone for. This is why some recent anti-Critical Race Theory curricula insist that slavery wasn’t necessarily an American institution, but an Atlantic-wide practice with a history four centuries deep.

But if we can broaden out our understanding of the past, we can also narrow in and use it to clarify and reveal. This work might require lancing myths and legends, but it also sets the ledger straight, allowing history to speak for itself. The journalist Ta-Nehisi Coates captured this sense in his widely read 2014 article in The Atlantic entitled “The Case for Reparations,” when he wrote, “If Thomas Jefferson’s genius matters, then so does his taking of Sally Hemings’s body. If George Washington crossing the Delaware matters, so must his ruthless pursuit of the runaway Oney Judge.”

We might only add that if the heroic image of William Sherman matters, so does the villainous figure of Jeff C. Davis. Or, more to the point, if Sherman’s March matters, so must Ebenezer Creek.