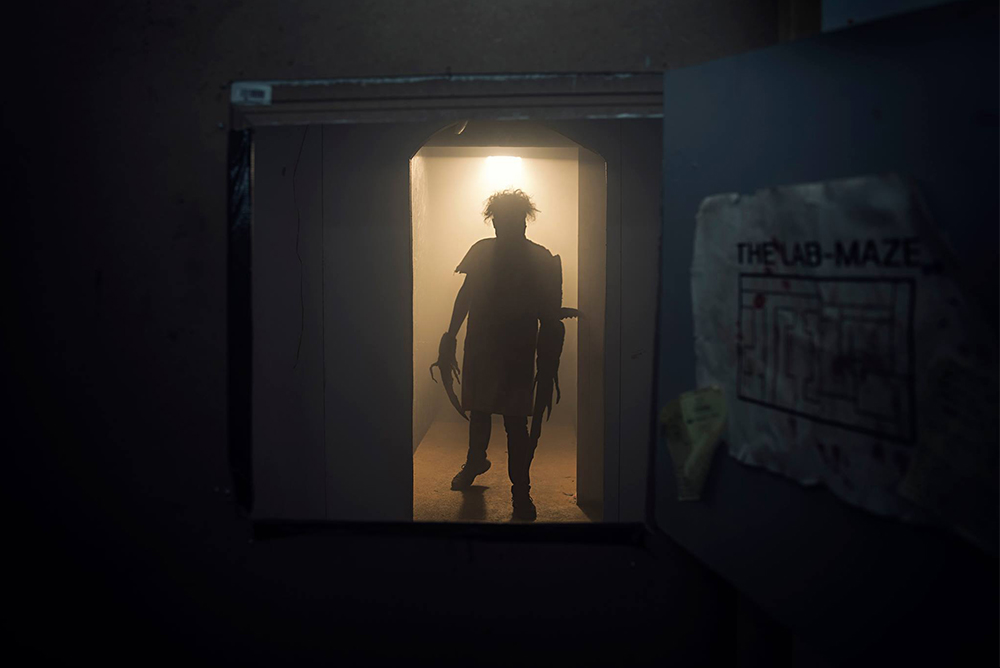 Mathias Clasen and his colleagues at the Recreational Fear Lab at Denmark's Aarhus University want to find out: Why do people so love being scared? Courtesy of Dystopia Haunted House. Photo by Henriette Klausen.


Fear gets a bad rap. It’s a so-called negative emotion, one that supposedly stands between us and our dreams. It is certainly true that pure fear doesn’t feel good, but that is the whole point of the emotion. Fear tells us to get the hell out of Dodge because Dodge is a bad place. Fear evolved over millions of years to protect us from danger. So, yes, a feel-bad emotion, but also, and perhaps paradoxically, the engine in a whole range of pleasurable activities and behaviors—which inspire what we can call recreational fear.

Once you start looking for it, you’ll find recreational fear everywhere. From a very early age, humans love being jump-scared by caregivers in the form of peek-a-boo, and being hurtled into the air (and caught). They get older and take great pleasure in chase play and hide-and-seek. They are drawn to scary stories about monsters and witches and ghosts. They perform daredevil tricks on playgrounds and race their bikes toward what, from a parent’s perspective, is certain and violent death. A little older and they get together for horror movie nights, stand patiently in line for roller coasters, and play horror video games. Indeed, most of us never quite lose our peculiar attraction to recreational fear—even if we eschew slasher flicks or dark crime shows brimming with murder, death, and gore.

So even though Dodge may be a bad place, we still keep visiting it, at least from the safe distance of play and make-believe. How come?

One hypothesis is that recreational fear is a form of play behavior, which is widespread in the animal kingdom and ubiquitous among humans. When an organism plays, it learns important skills and develops strategies for survival. Playfighting kittens train their ability to hold their own in a hostile encounter, but with little risk and low cost, compared to the real thing. Same with humans. When we play, we learn important things about the physical and social world, and about our own inner world. When we engage in recreational fear activities specifically, from peek-a-boo to horror movie watching, we play with fear, challenge our limits, and learn about our own physiological and psychological responses to stress. In other words, recreational fear might actually be good for us.

To investigate whether that is indeed the case and why, my colleagues and I have established the Recreational Fear Lab, a research center at Aarhus University, Denmark. We do lab studies, survey studies, and real-world empirical studies to understand this widespread but scientifically understudied psychological phenomenon. 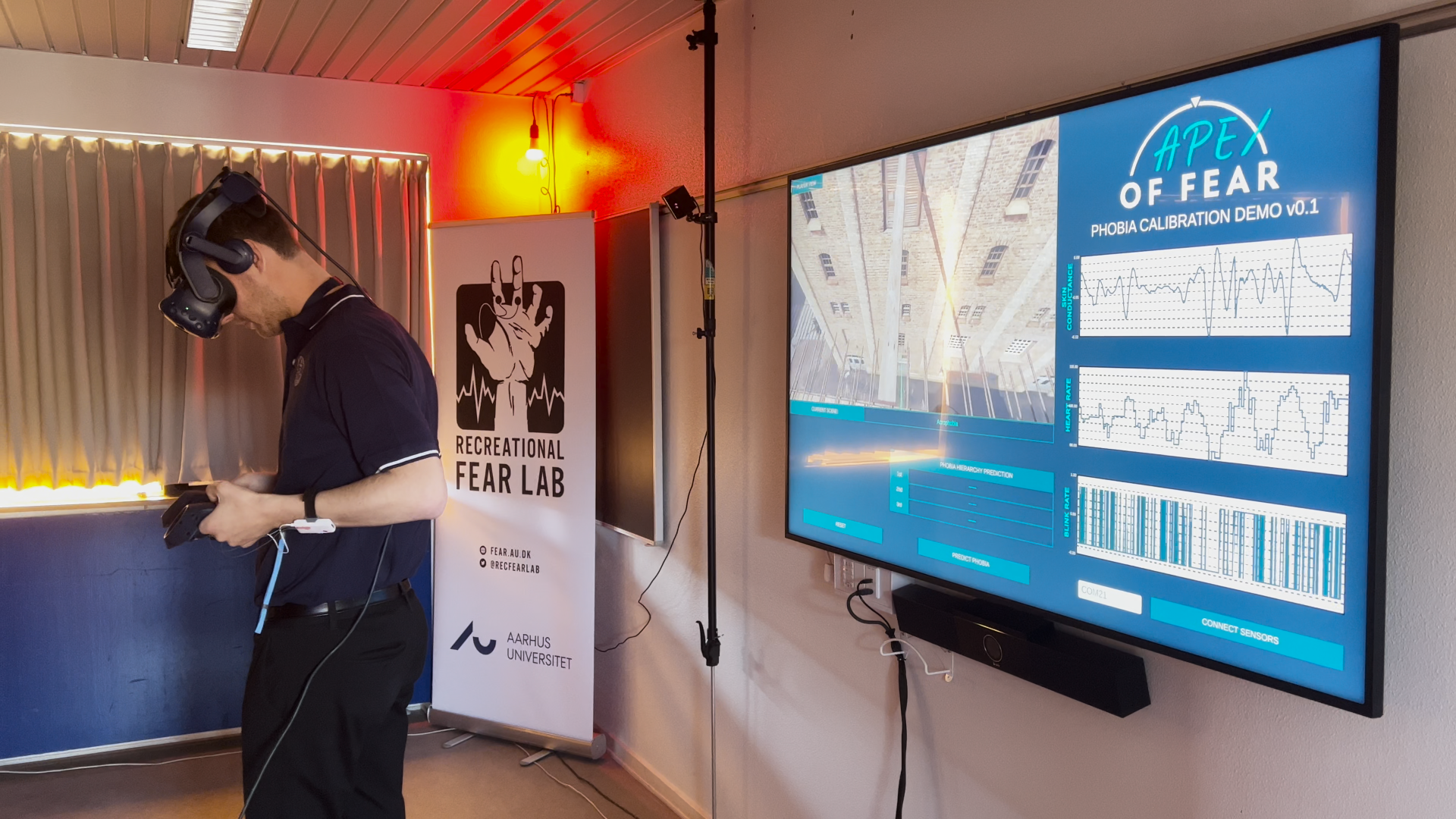 The Recreational Fear Lab conducts investigations to understand the scientifically understudied phenomenon of fear—and why it might actually be good for us. Courtesy of author.

In one ambitious research project, led by my colleague Marc Malmdorf Andersen, we set out to investigate the experiences of guests at a very frightening haunted house—Dystopia Haunted House in Denmark. We mounted surveillance cameras in the house’s scariest rooms, strapped participants with heart rate monitors, and distributed a bunch of questionnaires. The surveillance footage allowed us to see how guests responded to frightening events, such as a chainsaw-wielding pig-man chasing them down a dark corridor. The heart rate monitors told us about their physiological responses to such events, and the questionnaires allowed us to understand how they felt about it all.

When we engage in recreational fear activities specifically, from peek-a-boo to horror movie watching, we play with fear, challenge our limits, and learn about our own physiological and psychological responses to stress.

They told us they perceived their experiences as a kind of play, supporting our notion of recreational horror as a medium for playing with fear. But we also wanted to go deeper into the relationship between fear and enjoyment. You might think that relationship is linear—the more fear, the better. But when we plotted the actual relationship between fear and enjoyment, it looked like an upside-down U. In other words, when people go to a haunted attraction, they don’t want too little fear (which is boring), and they don’t want too much fear (which is unpleasant). What they want is to hit what we call the “sweet spot of fear.” That doesn’t just go for high-intensity haunted attractions either. When you hurtle a kid into the air, you don’t want it to be too tame or too wild; when teenagers joyride their bikes, they need just the right amount of tummy-tickling arousal; when you pick a horror movie on Netflix, you try to go for the one that sits just at the right point on the scare-o-meter.

So, there is pleasure to be had from these vicarious visits to Dodge, but are there any other benefits? In several past and ongoing studies of the psychological and social effects of engagement with recreational fear, we’ve seen it improve people’s ability to cope with stress and anxiety. For instance, one study—led by my colleague Coltan Scrivner—found that people who watch many horror movies exhibited better psychological resilience during the first COVID-19 lockdown than people who stay away from scary movies. Presumably, the horror hounds have trained their ability to regulate their own fear from playing with it. We know from another Dystopia Haunted House study that people actively use a range of coping strategies to regulate their fear levels in pursuit of the sweet spot, and it makes sense that we get better at using those strategies through practice.

You can think of recreational fear as a kind of mental jungle gym where you prepare for the real thing, or as a kind of fear inoculation. A small dose of fear galvanizes the organism for the big dose that life throws at it sooner or later. So even though fear itself may be unpleasant, recreational fear is not only fun—it may be good for us. My colleagues and I even have preliminary results to suggest that some people with mental health issues, such as anxiety disorder and depression, get relief from recreational horror. Maybe it’s about escaping anhedonia—emotional flatlining—momentarily, and maybe it’s about playing with troublesome emotions in a controllable context. For fear to be fun, you need to feel not only that the levels are just-so, but that you are in relative control of the experience.

With research findings such as these in mind, we should maybe think twice about shielding kids and young people too zealously from playful forms of fear. They’ll end up in Dodge sooner or later, and they will be better equipped if they’ve at least pretended to be there before.