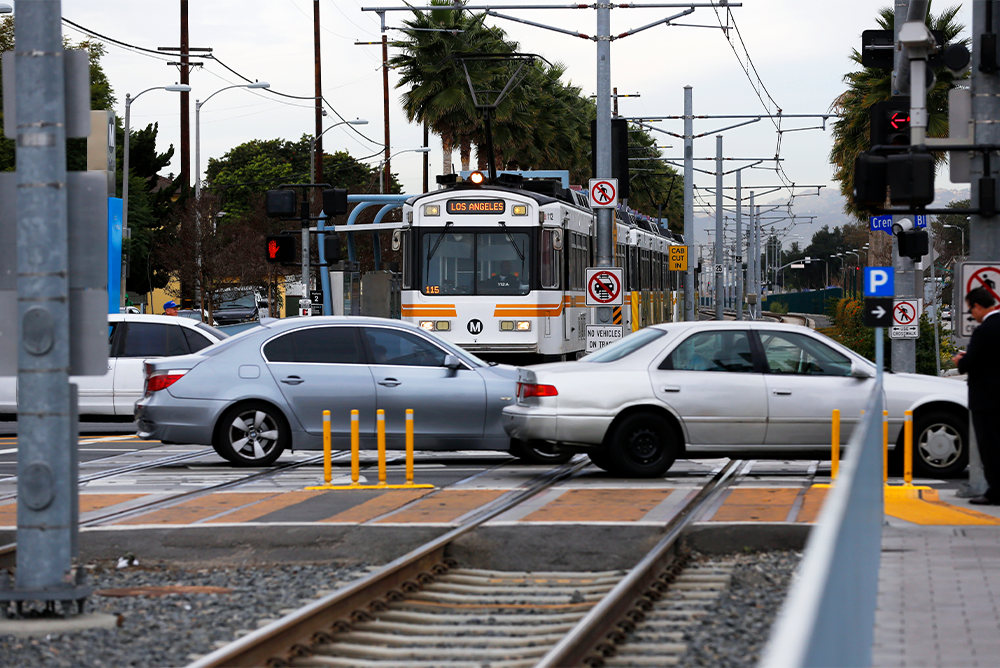 He was a train conductor. I was a passenger. Thanks to Metro dysfunction, we weren’t meant to be. Columnist Joe Mathews writes on the very L.A. heartbreak of myopic transportation design. Courtesy of AP Newsroom.

Our eyes met on a Saturday evening in Los Angeles. I wanted to go home. He wanted to take me there.

Could we find our way to each other in this lonely city?

Sure, we were only 30 yards apart. But we were separated by Crenshaw Boulevard—and by the folly of transportation planning in 21st century Southern California.

The object of my gaze was the driver of a Metro train on the Expo Line, which runs from Santa Monica to downtown L.A., and is also known as the E Line. The driver’s features, illuminated only by headlights and the passenger cabin behind him, gave him an air of mystery.

His train was approaching the light rail station on the west side of Crenshaw, one of central L.A.’s major thoroughfares, just south of Exposition Boulevard.

I stood on the east side of Crenshaw, across four lanes of cars from the station, with my train-loving nine-year-old son. We were weary from a long night of riding Metro rail lines around the city. But we also were excited. We had just ridden the newest Metro rail line in Los Angeles—the Crenshaw Line, or K Line—which opened earlier this fall, and which originates right at that intersection of Crenshaw and Exposition. It’ll eventually make its way to LAX.

We came up the escalator from the underground K train expecting to make what Metro calls an “easy transfer” to the Expo Line. The E Line tracks are just a few steps from the K Line exit.

Instead, we were confronted with a head-scratching situation, and a reminder that L.A. likes to make things hard.

When Metro planned and built the Expo Line—which opened back in 2012—it did not create a single stop at the corner of Crenshaw and Expo. It created two. The first, for trains that are heading west towards Santa Monica, was on the east side of Crenshaw, where my son and I were standing. The other stop, for eastbound trains, was across the street.

The Expo-Crenshaw stop should have been designed differently, because Metro had been planning the line that became the Crenshaw/K for decades. The agency knew that two lines were going to have connect there, someday.

Splitting light rail stations in this way isn’t unheard of. Other stops on the Expo Line—at Vermont Avenue, at Western Avenue—have a similar setup, with space-saving platforms on opposite sides of a thoroughfare.

But the Expo-Crenshaw stop should have been designed differently, because Metro had been planning the line that became the Crenshaw/K for decades. The agency knew that two lines were going to have connect there, someday.

I, for one, would have liked to see a train station built over the entire intersection—a grand building, with restaurants and shops and a beautiful waiting area—to put the two intersecting lines under one roof.

Metro did none of that. Its excuses cited costs, mostly, and the difficulties of getting approval for such connections in the political cesspool of Los Angeles. But the result is now clear: Metro is forcing passengers to brave Crenshaw, and its traffic, to connect between the K and eastbound Expo Lines.

It was across this unnecessary divide that the Expo Line driver and I encountered each other.

Crenshaw was full of traffic, and the crosswalk signal was red. I stood there as his train approached the east-bound station on the west side of the street. If the light didn’t change, my son and I would miss it.

That’s when my eyes met the driver’s. A minute went by, the crosswalk light remaining red. The driver, maintaining his gaze, generously kept the train in the station, doors open. But after another minute went by, he gave me an apologetic look, and moved the train a few feet forward, up to Crenshaw.

We knew then that we would miss the train—but the moment wasn’t over. Now the driver was stuck, unable to cross Crenshaw himself.

Why? Because Los Angeles requires trains to stop for street traffic and street lights, as if the trains were cars. And the train driver had a red light. Why? Because the city prioritizes cars over transit. Technology exists to allow passing trains to change street lights, so cars that might cross tracks have to stop and give way to trains. But L.A. doesn’t use it there.

A minute more, and the lights changed. In theory, we should have been able to negotiate our crosswalk, and the train driver should have sailed through his green light. But once again, we were foiled.

Crenshaw had filled with cars during the long light, and vehicles now blocked the tracks and the crosswalk. I thought of snaking my way through them to rendezvous with the still-nearby train, but I didn’t feel safe doing so with my son.

The driver extended his arms, palms up, in the universal expression of “What Can You Do?” My son and I did the same. For five minutes, we had been stuck here, gazing longingly at each other.

As another two minutes passed, the driver inched his way through the intersection, cutting off the cars on one side. We still hadn’t dared cross the street.

The train was now less than 10 feet away. I raised my thumb, hoping our new friend might stop and let us hitchhike. He laughed, waved to us, and rang the train bell, which briefly delighted my son. And then he disappeared into the night.

After another cycle waiting for the light to change, we managed to cross. We’d wait 12 minutes for the next train.

“That was so stupid,” my son said.