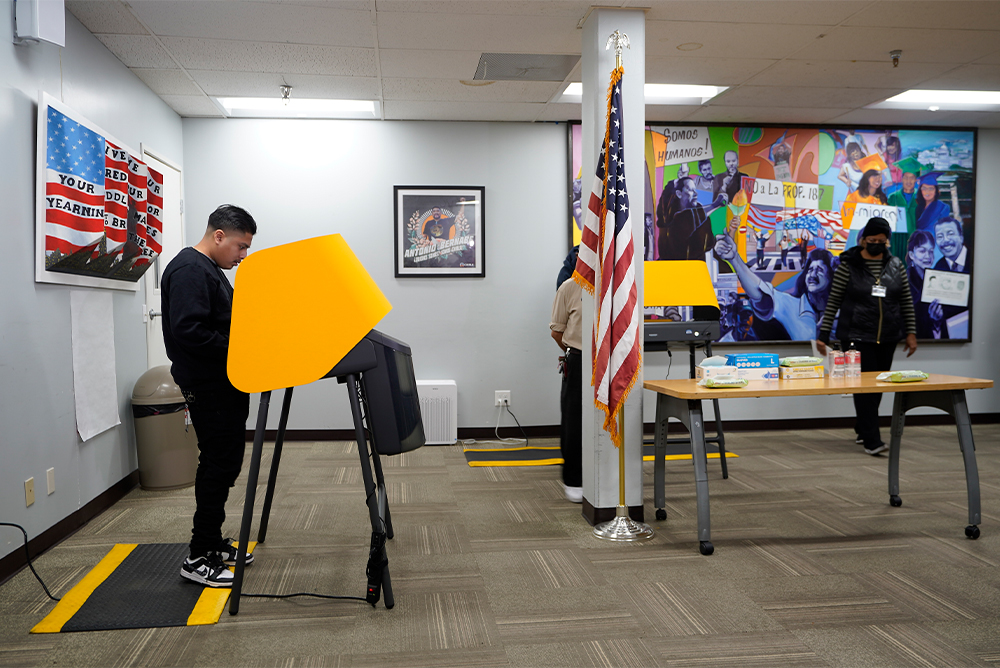 California can do better than its November elections. Read columnist Joe Mathews' case for rethinking the overlong, confusing megaballot. Courtesy of AP Newsroom.

Question: What would Californians have lost if we had canceled the election that concludes November 8?

Our fall elections have become unnecessary at best, and dangerous to democracy at worst. Closely watching this particular November election is enough to get anyone singing that old Gershwin tune, “Let’s Call the Whole Thing Off.”

No exaggeration—this California election offers less suspense, and is certain to deliver less surprise, than the recent Chinese vote for a new Politburo Standing Committee, overseen by dictator Xi Jinping.

We all know that Democrats will win the governorship, another legislative supermajority in Sacramento, and most Congressional seats. Democrats should sweep all statewide offices, with the possible exception of state controller, a job that allows some supervision of state spending but offers little real authority.

We know these results ahead of time not only because this is a very Democratic state, but also because the people on the ballot already ran against each other back in June. November is not a real general election, but a rerun of earlier contests, pared down to the top two vote-getters.

The rest of this election consists mostly of stuff about which we don’t know much, and care even less.

We aren’t familiar with the lawyers running to obtain or retain judicial seats, and few of us will ever check on the results of those races.

We don’t care enough to read the actual texts of the ballot measures we’re asked to enact. We do know that most of these proposed laws and constitutional amendments are power-and-money grabs by various special interests. We also know most will lose. That’s because we vote “no” on them, mainly out of uncertainty.

Even when ballot measures touch on high-profile issues we care about and follow closely, it’s unclear whether our votes will make any difference.

Californians do care about the right to choose, but Prop 1 would enshrine a right to abortion that we already possess under our state constitution, under state law, and under state court precedent.

Californians are all but certain to vote down sports betting measures, but the money and political power of gaming interests means that the state will soon have sports wagering anyway.

November is not a real general election, but a rerun of earlier contests, pared down to the top two vote-getters.

Some Californians care about local races, including in various counties that may replace sheriffs who have abused their power. But solving the real problem—the excessive, unaccountable power of sheriff’s offices—will take state constitutional reform.

The Los Angeles mayor’s race is fiercely contested. But how much real difference is there between the contenders? Both are Democrats in their 60s, and remarkably similar in everything from their center-left policy platforms to—given Rick Caruso’s hyper-excessive use of bronzer—their skin color.

Going forward, it wouldn’t be hard to cancel November elections. Or at least make November ballots much shorter.

We could stop voting to confirm or retain judges’ appointments. There’s no evidence that elected judges are better than appointed ones. If we needed to remove jurists who have gone rogue, we could use the power of the recall.

We could turn various state-elected offices, too—from attorney general to treasurer—into appointed jobs. Races for these so-called “down ballot” positions serve mostly to enable corruption. That’s because ambitious younger politicians run for them to build fundraising bases by soliciting the corporate entities regulated by these lesser executive offices.

We also could implement smart structural changes. Instead of running two redundant sets of elections under the state’s top two system, we could use ranked choice voting with instant runoffs in June, and determine winners in just one round. Some cities do this already.

Or Californians could accept the reality that we live in partisan times and stop pretending that our elections are non-partisan. Most voters are party animals. Instead of wading through ballots full of political candidates about whom we know very little, we could choose party lists. That’s how it’s done in much of the rest of the democratic world.

And when it comes to ballot measures, we ought to follow the example of advanced democracies that separate votes on issues from votes on representatives. We shouldn’t have to choose both at the same time.

I recently was in Switzerland, the world’s most successful direct democracy. Its citizens vote for elected representatives every two years, like we do. But votes on local, state-level, and national ballot measures operate on a separate calendar, spread out over four dates every year.

That means the Swiss vote on only a handful measures at a time. Each referendum and each initiative gets plenty of media attention and public scrutiny.

If we tried to do something similar, every three months Californians would receive, by mail or over the Internet, a ballot asking for their votes on just a couple of measures. That would be a much more responsible approach than the current, eye-glazing practice of throwing long lists of measures on ballots that also include votes on dozens of elected positions.

The state could do even more to help us out. When Californians vote on measures, we are acting as legislators. So why not schedule ballot measure votes to fit the legislative calendar? Let’s vote on ballot initiatives and referenda in January (when new ideas come forward in Sacramento and in local governments), April (when we see our tax receipts, and can better predict what the state can afford), July (after the budget has been signed), and October (once we’ve seen what laws the governor has signed or vetoed).