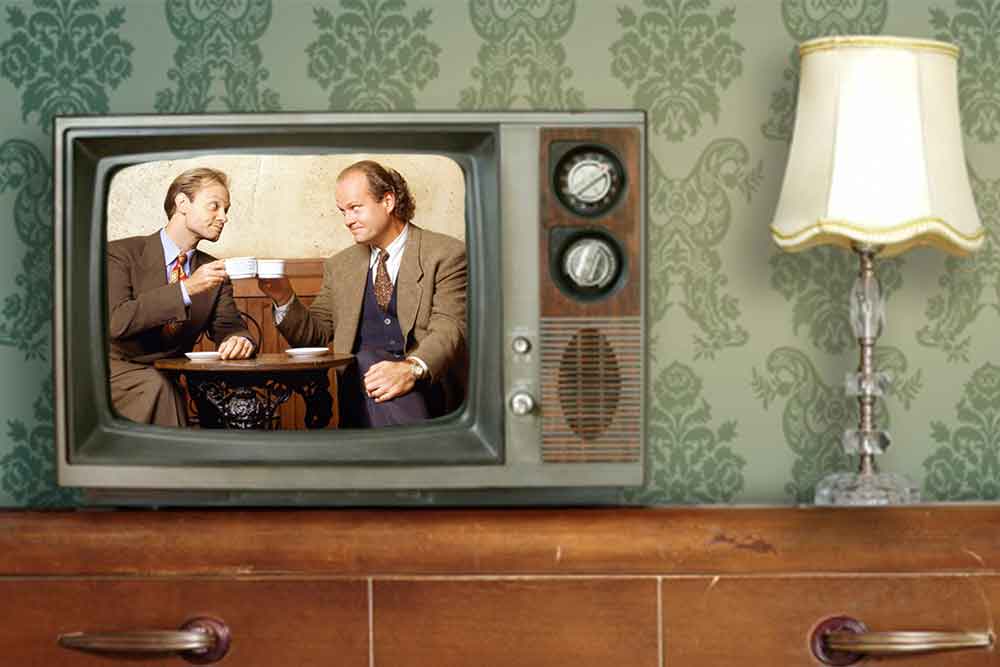 Classic sitcoms are an ideal comfort watch. But are we using them to escape reality or reimagine it? Illustration by Zócalo. Image courtesy of Creative Commons, NBC.

It didn’t start out intentionally. A little 30 Rock to help me get out of bed in the morning. Some New Girl with dinner. A nightcap of Frasier (as others have written, it is the best show to go to sleep to).

It spiraled from there, an easy escape from what was becoming an increasingly rough year.

Ever since the sitcom emerged in the late 1940s, the format has offered a bulwark against reality.

The first sitcom, short for “situation comedy,” featured real-life married couple Mary Kay and Johnny Stearns. The domestic comedy, characterized by its screwball sensibilities, drew from the couple’s own experiences as newlyweds. (As Stearns later explained, “If Mary Kay got stuck in an elevator, it would give me an inspiration for us getting stuck in an elevator.”) By the time Mary Kay and Johnny wrapped in 1950, the early sitcom ecosystem was flourishing as adaptations of American radio comedy programs began making the leap from the airwaves to television, with shows like I Love Lucy and The Goldbergs establishing the familiar lexicon of the genre we know today.

From the beginning, there was a reassuring sameness to the narrative structure. Turn on an episode, and you knew what to expect; should you have to step out for a moment, you could trust that when you returned, you’d find the same familiar faces interacting together on screen, like no time at all had passed.

Most importantly in sitcoms, there’s an implicit understanding: nothing will ever go that wrong. That’s because the sitcom is an episodic fantasy of life. Sure, the real world peeks and prods at the edges of the sitcom universe, but you know that here a resolution will always be forthcoming in 30 minutes or less.

It’s what makes the sitcom such an ideal comfort watch. Or at least that’s what it’s been for me the past few months, after some unexpected health issues led me to spend a good chunk of it in bed.

It was when I found myself rewatching the same episode of Frasier for the third time in as many months that I started to realize just how swept up in sitcoms I had become.

The season four episode is classic Frasier, with a stream of jokes, including a set up where Frasier’s brother, Niles Crane, takes out a magazine advertisement in hopes of expanding his private psychiatry practice. The script was intended to read: Jung specialist servicing individuals, couples… groups… Satisfaction guaranteed… Tell me where it hurts.

It was when I found myself rewatching the same episode of Frasier for the third time in as many months that I started to realize just how swept up in sitcoms I had become.

Niles is played by David Hyde Pierce, whose comic instincts verge on poetic, and the punchline comes when he learns that the magazine got the copy wrong. Flustered, he storms into the room to tell Frasier what happened. Rather than Jung specialist, they’d printed “hung specialist.”

Without missing a beat, Frasier asks, drolly, “Any calls?”

I could probably watch his delivery 100 times, and it would still make me smile.

Maybe, I told myself, this is me coping. Research does suggest that repeated exposure to positive distractions and familiar fiction can have beneficial health effects.

But it also felt a little too easy to get lost in this rosy glow of syndication—a gleam you can now live in perpetuity, thanks to streaming.

It made me think about the late French sociologist Jean Baudrillard. Toward the end of the 20th century, he argued that society was losing the distinction between the cultural products we consume and the real-life things that they are based on. He didn’t point to the sitcom, but surely, it’s an example of this—a simulacrum of American life. We’re watching a writers’ room’s idea of a make-believe U.S., drawing comfort from a false nostalgia of a world that was never really there in the first place.

The sitcom’s departure from reality is only becoming more pronounced with time. The genre has traditionally centered on the lives of “middle class” characters, but while the signifiers of class on television have always been aspirational, as the financial gulf widens between these characters and their real-life counterparts off screen, it has made sitcoms feel increasingly fantastical. For a point of comparison, at the start of the ’70s—the decade that brought us The Mary Tyler Moore Show, The Jeffersons, Laverne & Shirley, and the list goes on—61% of American adults were considered middle class, according to Pew Research Center data; by 2015, amid rising inequality, only half of the population fit the definition.

This could be one of the reasons why, today, there’s such a demand out there for classic sitcoms. We can’t live these lives in the real world, so we can at least live them second-hand on screen.

The escape into sitcoms increased in the pandemic, with Nielson reporting an audible uptick in viewership during COVID’s height, noting that “when audiences needed a break from reality, they traveled back in time to tried-and-true picks like Friends, Family Matters, The Golden Girls, and Two and a Half Men.”

In an unprecedented moment that wiped away so many of the things that sitcoms promise—connection, community, stability—is it any surprise that more people sought the comfort of these fables of what life could look like?

It’s certainly what’s drawn me to them now.

I’ve come to think of this year as my year of sitcoms, to crib off the title of My Year of Rest and Relaxation, the Ottessa Moshfeghi novel that’s neither restful nor relaxing.

Like Moshfeghi’s heavily medicated narrator who tries to escape her life through sleep, I know on some level, I’m hiding away in the well-worn grooves of these characters’ healthy, happy fictions.

But the pull of the sitcom is seductive. Watching them can feel like living in a day dream. You’re staring across the screen at lives that, on the surface, seem like they could resemble your own, except here, everything is shaped around human connection, and the worst thing that can happen to you is that you’ll learn a life lesson.

I know life is not a sitcom. But the more of them I watch, the more I wish we could take inspiration from the worlds they’ve imagined and bring the best of them into our own. Because all I know is that I’m not ready to wake up yet.