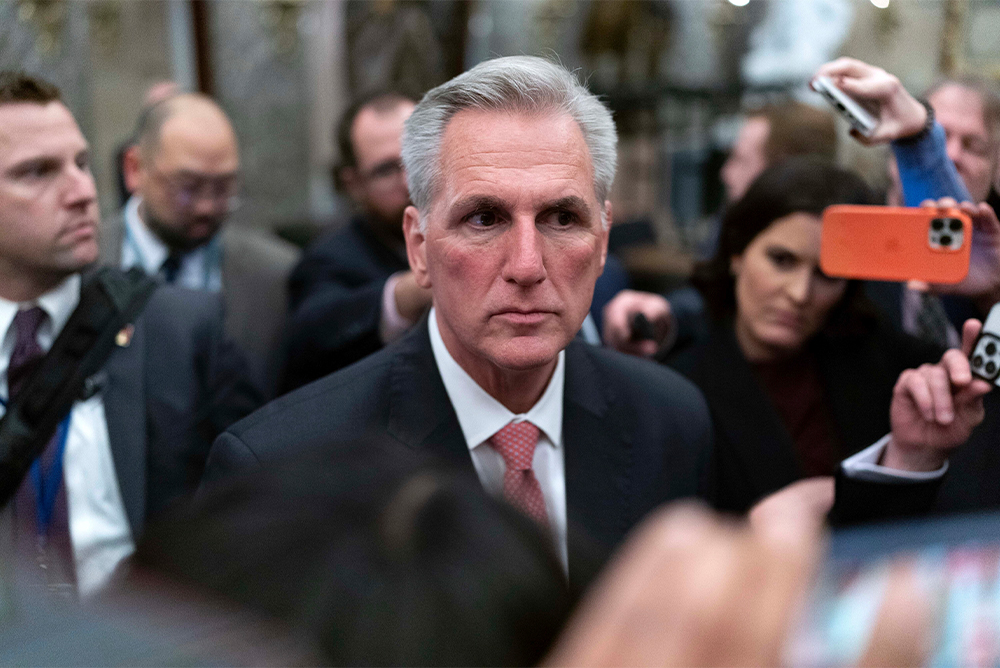 
On January 7, cameras recorded a beaming Kevin McCarthy as he ascended the rostrum of the House of Representatives and raised the speaker’s gavel. If one knew nothing about the previous few days, they might imagine this image captured the ceremonial coronation of a speaker who, like every other speaker for 100 years, had known the job was theirs for months.

A slightly wider angle shot of the House rostrum shows a more complicated scene. Mr. McCarthy is the only one smiling. The seven clerks gathered around the dais all sit expressionless, looking exhausted. This is because McCarthy took the gavel at 12:30 a.m. on the fourth day of voting. In the words of Florida’s Rep. Matt Gaetz, McCarthy “sold shares of himself” as he campaigned and traded so much of the speaker’s authority for votes that Gaetz “ran out of things I could even imagine to ask for.” McCarthy’s concessions are apparently so significant that he refuses to divulge them to his aides or the public.

What happens when someone gains a prestigious political position but loses the respect and authority that its holders usually command? To answer that question, we can look to Marcus Didius Julianus, the Roman senator who became emperor by winning his crown at auction.

Julianus was born in 133 C.E. to a wealthy Milanese family. He rose quickly through the ranks of the Roman senate. He also won a major victory against Germanic invaders as a legionary commander, served as a Roman consul, and governed multiple provinces. This distinguished career put Julianus among the most accomplished senators of his generation. But Julianus really wanted to be Roman emperor.

He got the chance on March 28, 193, when the reigning emperor Pertinax was killed in the palace by rebellious praetorian guards. The praetorian commander knew about the rebellion in advance and arranged for Flavius Sulpicianus, his choice for the next emperor, to be in the praetorian barracks when Pertinax died. The plan was that Sulpicianus would secure the guards’ support and then use the soldiers to compel the senate to recognize him as emperor.

Julianus, however, heard about the murder of Pertinax before Sulpicianus and the soldiers agreed on terms. He “raced to the camp” and “promised to give the praetorians everything they wanted” if only they would award him the title of emperor.

What happens when someone gains a prestigious political position but loses the respect and authority that its holders usually command?

The senator Cassius Dio called this “a most disgraceful affair” in which “both the City and its empire were auctioned off as if in some market.” The soldiers shuttled back and forth between Sulpicianus and Julianus, informing each of them what the other had most recently bid. When it seemed that Sulpicianus’ offer to pay each soldier 20,000 sesterces apiece (an amount equivalent to 33 pounds of silver) might win the day, Julianus raised his bid to 25,000 “both shouting it in a loud voice and indicating the amount with his fingers.”

The soldiers, “captivated by this excessive bid…received Julianus inside and declared him emperor.” The senate approved the choice without any real enthusiasm, largely because Julianus had surrounded its meeting place with praetorians.

After the senatorial vote, Julianus walked across the Forum to the imperial palace. He might have been grinning in a McCarthy-esque fashion as he climbed the ramp up to the Palatine Hill and walked into the residence. When Julianus entered the dining room, he saw the spartan dinner that had been prepared for Pertinax and “made great fun of it, sending people out to every place where something expensive could be found at that time of night” so he could feast in style. He then summoned a famous actor “to play dice” with him as they celebrated his accession.

The party did not last long. A sullen mob rioted in the Forum the following morning as Julianus tried to enter the senate house. Within a week, crowds in the Circus Maximus began chanting for him to be replaced, senators started mocking him in private, and the praetorians became antsy when they realized that he did not have the money he promised to pay them.

Julianus responded to this discontent in the only way he knew. He “paid court to the senate and all men of influence by making promises, bestowing favors, and laughing and joking with everyone.” Cassius Dio wrote that “he left nothing undone to court our favor,” but everything he did “made us suspicious because he was indulging in servile flattery.”

Julianus was so obviously weak that three commanders stationed all around the empire rebelled almost immediately after hearing about how he had taken power. By early May, the forces of Septimius Severus, the rebellious governor of Pannonia Superior, reached the outskirts of Rome. “Dumb and witless” Julianus, the historian Herodian wrote, “did not know how to handle the situation” without making yet another offer that further reduced his already much-diminished power. He sent “a letter to Severus” in which he offered “to make him [Julianus’s] colleague as emperor” in exchange for peace. The senate and praetorians supported this proposal until they realized that Julianus “was terror stricken and in despair.” At that point, the praetorians and “all the senators immediately abandoned him for Severus”—despite all Julianus had promised them.

The senators then condemned Julianus to death and the praetorians sent soldiers to execute him. When the executioners arrived in the palace, Cassius Dio wrote, the bewildered Julianus asked them: “But what evil have I done? Whom have I killed?”

He was right to be confused. He died not because he was evil, but because he had nothing more with which to buy support. “Servile flattery,” as Cassius Dio described it, had failed him. The emperor had burned through all his political and financial capital in only 66 days.

Will Kevin McCarthy last that long?

The speaker’s time on the dais, however long it lasts, likely will be filled with the same string of smiling concessions, exorbitant promises, and compromises that consumed Julianus’ short residence in the imperial palace. And when the new speaker runs out of things to give his allies, one wonders if he will understand any better than Julianus why those to whom he promised so much could turn on him so suddenly.