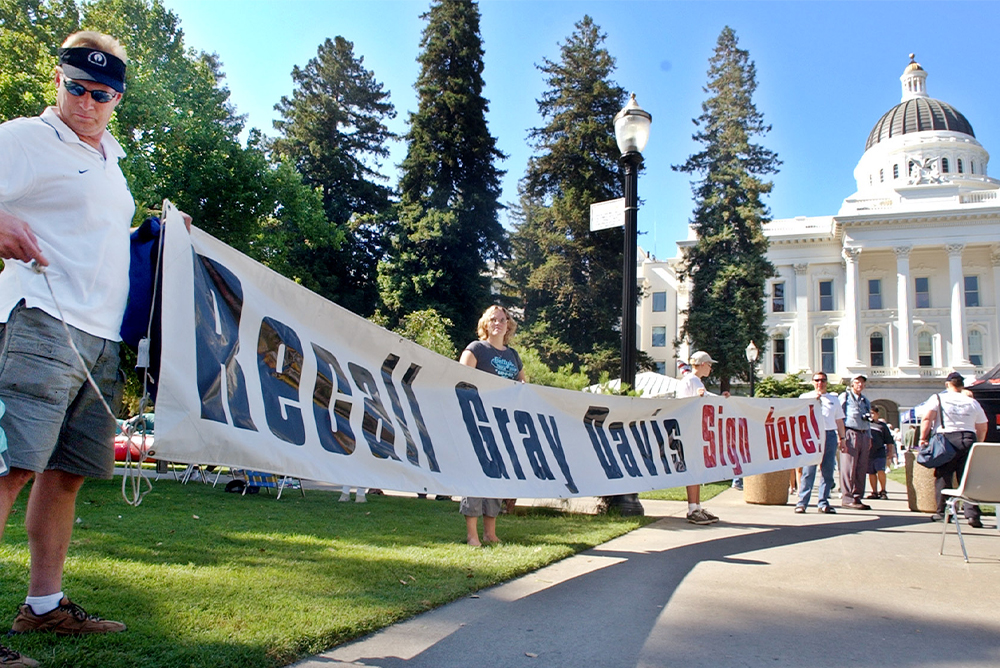 Governors on the left and right have portrayed California as an international model of freedom. But does the state really live up to its supposed exceptionalism? Columnist Joe Mathews explores. Courtesy of AP Newsroom.

Twenty years ago, editors at the Los Angeles Times sent me to Sacramento to interview an anti-tax activist named Ted Costa, who had filed a petition that would lead to the recall of California’s governor, and his replacement by Arnold Schwarzenegger.

“The recall is about freedom,” said Costa, as he gleefully referred to himself as a “wacko” and “president of the Banana Republic of California.”

“Here,” he said, “the people are showing the world that they can kick the rulers out anytime they like.”

I thought of Costa as I watched Gov. Gavin Newsom give his inaugural speech this month in Sacramento. Newsom and Costa occupy opposite ends of the political spectrum. But Newsom, like recall supporters once did, couldn’t stop talking about California as an alternative American republic—a place to demonstrate what real freedom might look like.

“More than any people, in any place, California has bridged the historic expanse between freedom for some, and freedom for all,” Newsom said, adding: “California will continue to lead out loud, by advancing a far-reaching freedom agenda.”

Outside the Golden State, such messianic thinking is mocked as left-coast lunacy. Even inside California, political cognoscenti dismiss Newsom’s rhetoric as advancing national political ambitions. And they recall 2003 as a bizarre sideshow.

These cynics are wrong. Yes, this state has engaged in global hype since the Gold Rush. And yes, much talk about California as global leader is pretentious and over-the-top. But our pretensions have been repeated so long that they have acquired real weight.

In retrospect, and after reflecting on my own career observing California governance in the 21st century, the 2003 recall looks less like a strange moment and more like the beginning of an era. The recall was an international event that elected a hyper-ambitious world-famous movie star as governor. Since then, state leaders have thought and acted as global agenda-setters, as if they were top diplomats at the United Nations or cardinals in the Vatican.

This shift goes unrecognized because Californians and Americans look lazily at politics, through partisan lenses. The recall, and the elevation of a Republican to the governor’s office, shifted the state right, then the state moved back left. Where’s the continuity in that? Here’s where: in the global scale of the rhetoric, ambitions, and policies of our governors.

The recall, and the elevation of a Republican to the governor’s office, shifted the state right, then the state moved back left. Where’s the continuity in that? Here’s where: in the global scale of the rhetoric, ambitions, and policies of our governors.

While Arnold Schwarzenegger, Jerry Brown, and Gavin Newsom are very different characters, they all increased the power of an office that functions as a second American presidency. And they have talked in world-historical terms of California as a place apart, a model for America and other countries.

Schwarzenegger used the word “Armageddon” more than any politician I’ve ever encountered, and offered himself and his state as world savior. He pursued policies, especially on climate change, health care, and political reform, that were at odds with those of other states and the nation.

“We are the modern equivalent of the ancient city-states of Athens and Sparta,” said Schwarzenegger in his fourth State of the State address. “Not only can we lead California into the future … we can show the nation and the world how to get there.”

Brown was less messianic and more philosophical, but he was ambitious. He approved a series of protections and supports for immigrants—in the face of an anti-immigrant wave in Washington—that constituted a new, California form of American citizenship.

And he portrayed California as battling apocalypse, just as Schwarzenegger did. He traveled the world as if he were a president (he even met one-on-one with China’s Xi Jinping) to build a “network of the willing” of provinces and countries eager to prevent climate Armageddon and nuclear holocaust.

But for all of that work, it is not Schwarzenegger or Brown but the current governor, Gavin Newsom, who has been most aggressive in his California exceptionalism. Newsom portrays California as a free nation, providing protection against an America descending into fascism, hatred, violence, book-banning, and restrictions on the rights of immigrants, women, and LGTBQ people. He scheduled his second inaugural for January 6 and led a peaceful march to the Capitol in Sacramento—drawing a deliberate contrast between California and the insurrection of 2021.

In public, Newsom won’t stop talking about the national and global leadership of the “world’s fourth largest economy.” His second inaugural connected his personal and family history to the idea of California as a global bastion of freedom that is both “giving shape to the future” and “molding the character of the nation.”

“California lights the territory for the rest,” he concluded.

There is an enormous problem with this sort of rhetoric, one that Newsom openly confronted. The state itself has enormous problems, and the lives of its people are defined by local struggles—especially the struggle to be housed—not by global ambitions.

The question for California now is whether the state can do more than enact progressive policies and ambitious goals. It must make major improvements in the lives of its people.

With recession looming and the state budget suffering, the limitations of California’s outdated governing system—first designed in the 19th century—are evident. Newsom and other leaders know the system has to change to make it possible for action to match ambitions.

I’ve long been a dark-hearted cynic about the state’s willingness to change. But there are some green shoots. Civic groups have been quietly meeting to talk about making major revisions to, or even rewriting, the constitution, which dates to 1879.

And last week, a new organization, the ProRep Coalition, announced an effort to remake California’s election system. Their proposal, already endorsed by smaller political parties on the right and left, is for a multi-party system of proportional representation—allocating power and representation by the percentage of the vote to allow more diversity and more expertise in government, as the world’s most advanced democracies do.

Such efforts seek to transform the rhetoric of the last 20 years into reality. If they succeed, it would spark a new era for California, where we become not just a state but the next American republic.