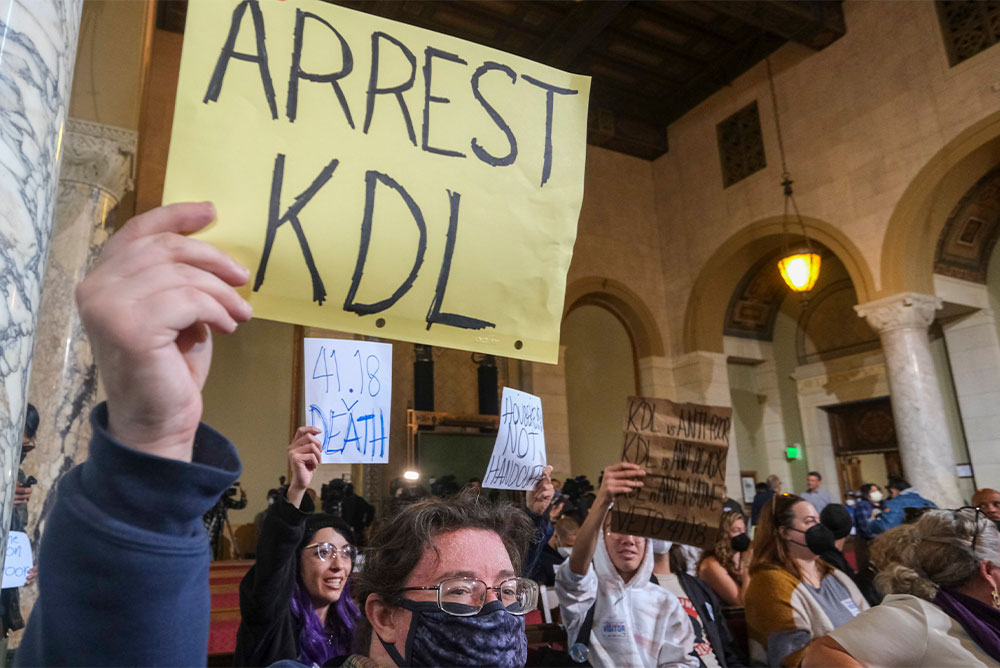 As he left office in December, Los Angeles City Council member Paul Koretz publicly addressed Angelenos who disrupt meetings of the scandal-plagued council with protests and profanity. “In their own words,” Koretz said, “I yield my time: F—k you.”

This closing comment of a political career—Koretz lost a bid for city controller—might have seemed inappropriate. But in the council chamber, it drew a wildly positive reaction, with council staffers jumping up and down and Koretz’s colleagues standing to applaud. It was as if “F—k you” had replaced “Eureka” as the state motto.

That moment showed the depths of the mutual contempt between public officials and the people in our state. It also demonstrated just how one-sided the narrative about anger in the public square has become.

Those high-profile attacks can’t be dismissed as anecdotal. Threats against members of Congress have increased tenfold in the last decade. Polling has shown that about one in five Americans believe that political violence is sometimes justified—numbers that approach the percentages of people in Northern Ireland who felt the same way during the Troubles. The social costs of threats and violence are mounting. Facing harassment, public health officials retired in record numbers during the pandemic.

News media have been especially attentive to such violence for two reasons—because we cover political figures, and because journalists themselves are frequent targets. Your columnist has become so accustomed to threatening emails, texts, and social media posts that I no longer give them a second thought.

But in California, politicians have done little to protect journalists or everyday citizens who participate in the public square. Instead, they’ve been trying to protect themselves.

Around the state, that’s involved more security for public officials. And in many cases, local politicians have seized the opportunity to put more distance between themselves and ordinary Californians. Many officials restrict access to their buildings and offices, while lobbying for state laws that will allow them to participate remotely in meetings without disclosing their location.

One new law, Senate Bill 1100, empowers the presiding member of a city council or other local legislative body to warn and then remove an individual judged—by the lawmakers themselves, of course—to be disruptive.

In California, politicians have done little to protect journalists or everyday citizens who participate in the public square. Instead, they’ve been trying to protect themselves.

This law isn’t particularly novel. State laws already essentially bar citizens from meaningful participation in the negotiations and contracting that are central to governance. In public meetings, citizens are typically limited to short statements or questions—“three minutes at the microphone”—that elected officials aren’t required to answer. The new bill goes further in this authoritarian direction, encouraging those in power to kick dissidents out.

But, it won’t make local meetings any quieter or safer. To the contrary, frustrated citizens will likely try to get themselves removed from meetings to demonstrate the depths of their protest and perhaps create legal causes of action against local governments because of their exclusion.

The underlying lesson is that keeping the public away isn’t protection. It’s perilous, because it inspires contempt. You can only hide from angry constituents for so long.

Which is one reason why people are increasingly choosing to protest at their representatives’ homes. Officials of all stripes have pursued regulations to restrict such protests and protect their families and neighbors from the noise, nuisance, and confrontations that come with them.

The impulse is understandable, but the restrictions haven’t stopped protesting near officials’ homes in Los Angeles, which passed such a law.

And such legislation is nakedly one-sided, because politicians haven’t stopped knocking on our doors in search of votes.

Our leaders aren’t just victims of anger—they are often victimizers, inciting threats and violence against ordinary people. Since November 2020, hundreds of elections workers have quit because of harassment by election deniers, many of whom are officeholders themselves. Political rhetoric also coincides with a rise in hate crimes since 2014. At the same time, public officials have sanctioned violence against protestors, many for progressive causes; three states have passed laws providing legal immunity to people who drive cars into protests.

“Political leaders’ rhetoric is particularly influential in normalizing violence among their followers, inflaming already angry people, and focusing those inclined to violence on particular targets,” Rachel Kleinfeld, senior fellow in the Democracy, Conflict, and Governance Program at the Carnegie Endowment for International Peace, told the January 6 Commission.

In this context, we citizens are retreating from civic life, and from one another. A fascinating new study, Democracy Lives in Darkness, by Emily Van Duyn of the University of Illinois, shows how Americans are doing more of their civic and political participation in small, secretive groups to avoid retribution from politicians and their fellow citizens.

That’s tragic. The most reliable way of combating political violence is to build better personal connections between politicians and people. We need more spaces for public officials and regular people to get to know each other personally, and to talk freely.

The best model I know for this is a South Pasadena city councilmember who, accompanied by his dog, takes frequent long walks through the city, checking on every block and stopping to chat with people along the way. There’s no need to protest a politician like that at his house—he’ll come to yours.

Unfortunately, next door to South Pasadena is the district of Los Angeles City Council member Kevin De León, a paragon of bad relations between politicians and people.

De León is in the news for refusing to resign after being caught on tape in a conversation full of racist and bigoted comments. Over the holidays, De León and an activist had a physical confrontation at a toy giveaway.

The context for this fight is poorly understood; the conflict between the councilmember and activists started years before the tape leak. De León and his staff maintain they have been doxed, harassed, and attacked by activist groups who oppose their policies of housing the homeless.

In other words, the pressure and anger De León is facing now is not new. Which may explain his refusal to resign.  Could he even be sure that his conflict with activists would end even if he quit? Ask yourself:  if you were in his place, would you give ground? Would you step down?

Or would you just say: f—k you?