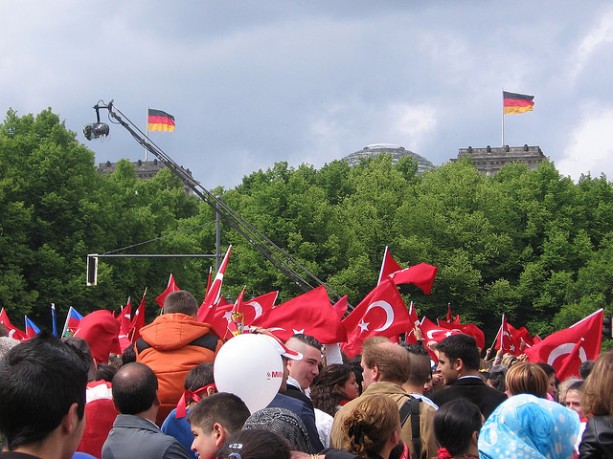 I thought I was taking a break from my life as an immigration reform advocate in Washington. Of course, I knew immigration was a roiling issue in Europe too. Even from my beleaguered bunker inside the beltway, I’d caught wind of the murder of Dutch filmmaker Theo van Gogh; the Paris riots; the Danish Muhammad cartoon crisis. Still, I thought a few months of living in Europe and listening in on its immigration debate would clear my head and give me some perspective. After all, I reasoned, the issues – and our countries – are so different.

I couldn’t have been more wrong – about the escape.

Europe and the U.S. are certainly different. Germany, where I spent two months this winter, is an economic powerhouse. But its stratified social structure feels left over from another era: rigid high-school tracking, pervasive credentialism and workplace seniority systems sharply limit personal opportunity. Denmark, where I also visited, is even more different: a tiny, homogeneous country (population 5.5 million), with the world’s most developed welfare state. What, I asked, could it possibly have in common with the giant, hyper-diverse U.S., the world’s most developed free-market economy?

In both Germany and Denmark, unlike in the U.S., the immigration debate is less about how many foreigners to admit than it is about those already living in the country. In the 1960s, both nations imported guest workers from Southern Europe and Turkey – foreigners later allowed to stay and be joined by families from home. But for one reason or another – some economic, some cultural, some rooted in government shortsightedness – many of these workers and families failed to integrate into their new societies. And over the past decade, both German and Danish publics have become increasingly alarmed, calling for sometimes helpful, sometimes punitive and coercive integration policies – from government language courses to much-resented restrictions on visas for foreign spouses.

Still, for all the differences, when you scratch the surface, Europe and the U.S. turn out to be more similar than they first appear. All three countries, it turns out, need foreign workers – both highly skilled and less skilled workers. But voters in all three nations are anxious about the cultural differences the immigrants bring. As a result, policymakers in all three places are paralyzed: caught between rationality and emotion – between their country’s economic interests and voters’ spiraling fear and resentment.

Germany, the world’s second largest exporter, just behind China, has a voracious need for foreign workers to do jobs Germans are either too educated or not educated enough to do. Every summer, 300,000 Eastern Europeans and others come to Germany to fill seasonal agricultural jobs. That’s a huge number: translated to the U.S., it would amount to 1.2 million agricultural workers every year. In fact, we admit fewer than 70,000, relying instead largely on illegal immigrants. But the bottom line is the same in both countries: the domestic workforce, hardly growing and increasingly educated, has less and less interest in outdoor, physical work. Neither nation can sustain its agricultural sector without immigrants. And in both countries, even in the downturn, the same is true in an array of other industries – hospitality, the personal service sector and, most urgently in Germany, home health care for the elderly.

Europe’s generous welfare states complicate the picture somewhat. In the U.S., the labor market self-corrects to synchronize with the business cycle. Thanks to cell phones and the internet, even unskilled workers know about job opportunities a continent away. And when there is less work available, fewer migrants make the trip – so much so that during the downturn, fewer than half as many Mexicans entered the U.S. each year than were coming a decade ago when the economy was booming. It doesn’t work that way in Germany or Denmark, where many immigrants and their children find it cheaper to live on the dole than hold a job. Still, in either case, what drives most migration is an economic calculus – individuals’ calculus about their opportunities in a global labor market. And receiving countries need to manage this dynamic to their advantage.

So too at the skilled end of the job ladder. The twenty-first century is posing the same challenge in all developed countries. Innovation is our era’s key to business success, not just in IT and communications, but also in traditional sectors from banking to manufacturing. No nation produces enough scientists, engineers, inventors or high-end business managers to drive its knowledge economy. And all of our countries are scrambling to attract highly skilled immigrants. This is the global race of our era: not for new, advanced weaponry – or colonies or natural resources – but for international brainpower.

In 2005, Germany created a new visa to attract highly skilled immigrants. It’s an appealing package: the visa is permanent, not temporary; you can bring your spouse, who can also work legally. And there’s no test to determine if you’re taking a job that could be filled by a German worker – tests of a kind that often lead to red tape and delay. Still, even these favorable terms attracted fewer than 200 applications for the new visa last year. In the U.S., in contrast, we admit some 250,000 highly skilled immigrants a year, some temporary, some permanent, plus roughly five times as many foreign students as Germany. Yet in the U.S. too, employers – from universities to government labs to cutting-edge IT companies – complain about a shortage of high-end workers.

It’s no mystery why policymakers in Germany, Denmark and the U.S. have proven unable or unwilling to satisfy their economies’ demand for foreign workers. Voters in all three countries are skeptical of immigrants, if not hostile, blind to the economic benefits they bring and worried about whether they will integrate. Last summer, Thilo Sarrazin, an establishment politician and former central banker, shocked Germany with an incendiary, best-selling book claiming that immigration was destroying the country, more than likely because of foreigners’ defective genes. In Denmark, the Danish People’s Party is fixated on origins, calling for a halt to all immigration from non-Western countries. And though Denmark’s mainstream parties have hesitated to go that far, in government both left and right have followed the DPP’s lead, slowly making their tiny country less and less hospitable to foreigners.

In America, we still pride ourselves on being a nation of immigrants, and we frown on talk of genetic inferiority. But coming home from Europe this spring, I began to feel this was perhaps a distinction without as much difference as I once thought. Rising anti-immigrant sentiment in Arizona and elsewhere doesn’t feel that far removed from the xenophobia surfacing in Germany. And new claims, from House Republicans and others, that every immigrant we deport will open a job for an unemployed American, are just as misleading and ultimately self-defeating as the counterfactual anti-immigrant arguments I heard in Europe. Once again, in all three countries, the bottom line seems much the same: rising public anxiety, mainly about unskilled immigrants, is driving out all rational discussion and preventing policymakers from acting effectively to meet national economic needs.

The fact that many of the immigrants in Germany and Denmark are Muslims only raises the stakes, adding to concerns about what their failure to integrate would mean for the host country – for its cultural mores and national security. Muslim populations are growing; native-born families are having fewer children. And it’s easy for many Danes and Germans to imagine the worst – to fear that every headscarf and every mosque is a sign of surging fundamentalism.

Thoughtful people in both Denmark and Germany recognize that radical Islam is a reality in their country, but many feel the threat is exaggerated. According to Naser Khader, a Danish member of parliament of Syrian-Palestinian descent who has been an outspoken critic of Islamic fundamentalism, perhaps 10 percent of Muslims in Denmark are anti-Western Islamists. An equal share, he says, are unequivocally supportive of Western values. The problem is that the majority in the middle is often hesitant to repudiate the radicals, and no one, newcomer or native born, draws a sharp enough distinction between “religious Islam” and “political Islam.” This dynamic, and the need to reverse it, helps put our American situation in some perspective – whatever problems we’re facing, they look small in comparison to Europe’s.

Still, standing back, I found myself struck by a final haunting parallel. We Americans tend to think we have perfected the art of immigrant integration. We argue bitterly about border issues and enforcement, and how many foreign workers to admit, but we take it for granted that immigrants are succeeding in America. We count on the traditions of generations past – that mysterious alchemy we once called “the melting pot.” And unlike in Europe, we make virtually no effort to help newcomers make their way in the new country.

But what if, like Europe a generation ago, we too are sowing the seeds of a long-term failure? True, immigrants in the U.S. are still integrating more successfully than in Europe: labor force participation is higher, unemployment lower, language acquisition and educational outcomes significantly better. But what kinds of results can we expect over the long haul from 11 million unauthorized immigrants and their children – newcomers blocked by law from full participation in society? Workers stuck in black-market jobs with little opportunity for advancement; families discouraged from putting down roots; parents afraid to send their children to school; talented students denied college scholarships – it’s not exactly a recipe for successful assimilation. Add our angry debate – the unrelenting anti-immigrant rhetoric now a staple across the country – and it’s hard not to fear for the future. Legal and illegal, Latino young people are getting the message – and it is breeding alienation that will create problems for decades to come.

Yes, the U.S. and Europe are different. But thanks to the global economy, we are all what Germans call “immigration countries” – and the challenges we’re facing are surprisingly similar. Instead of a needed respite, in the end my time in Europe felt like a wake-up call. America has a glorious record as a nation of immigrants, but that heritage may be more fragile than we think.

Tamar Jacoby is president of ImmigrationWorks USA, a national federation of small business owners advocating immigration reform. In fall 2010, she was a Bosch Public Policy Fellow at the American Academy in Berlin.