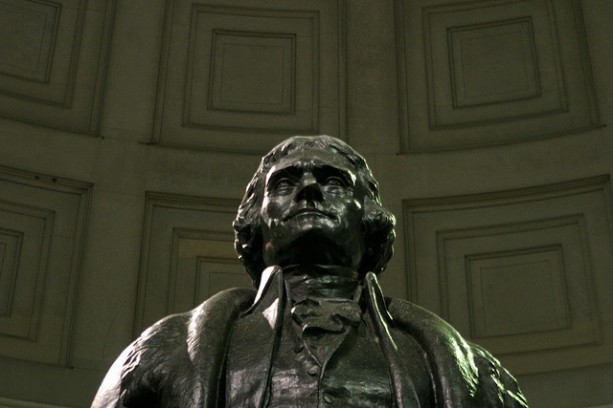 Of all the members of the California Legislature, Assemblyman Frederick Madison Roberts, who served from 1918 until 1934, could claim the finest pedigree.  He was a great grandson of Thomas Jefferson, third president of the United States, and through Jefferson’s mother, a descendant of Charlemagne, William the Conqueror, and the first six kings of England.

But if Assemblyman Roberts had visited his ancestral home in Virginia, he would not have been allowed to eat in a restaurant or use a restroom or ride in the front of a bus.  Assemblyman Roberts was black, in fact, the first black legislator in California’s history, and the first non-white in modern times.

Assemblyman Roberts, a Republican, represented south central Los Angeles in the days when blacks still voted GOP.  He came from a middle class black family that had moved to Los Angeles from Ohio.  A middle class black community had grown up in Los Angeles because it was the terminus of the transcontinental railroad.  The best jobs available to black men at that time were as Pullman porters, and the Brotherhood of Sleeping Car Porters, founded by A. Philip Randolph in the 1920s, was the first black labor union.  Thus Roberts’ election to the legislature in 1918 was not surprising.

He served 16 years until he was defeated in 1934 by Democrat Augustus Hawkins, who went on to a half-century career in the legislature and in congress.  In the 1930s, African Americans switched their allegiance from Republican to Franklin Roosevelt’s Democratic Party.  Roberts, however, remained a staunch Republican and died shortly after returning from the 1952 Republican National Convention.

Roberts’ ancestry is now the subject of an enormous controversy because his ties to Jefferson are based on allegations that the author of the Declaration of Independence had several children by a slave he owned. The Jefferson family has long denied the allegation that Jefferson fathered slave children; academics have argued about it for generations; and both sides of the political divide contest the issue today.  Pity poor Assemblyman Roberts; is he an heir of this famed family, or just a victim of a political controversy?

Jefferson’s wife Martha died in 1782 and in 1784 he became minister to France.  In 1787, he arranged for his eight-year-old daughter Polly to join him. She was accompanied by 14-year-old Sally.  Here supposedly the liaisons began between Thomas Jefferson and Sally Hemings.

After they returned to Monticello, Jefferson’s hilltop plantation, Sally had a number of children.  Four of these children lived to maturity: sons Beverly, Madison and Eston, and daughter Harriet.  These are the children alleged to have been fathered by Thomas Jefferson.   The third child, Madison Hemings, was the grandfather of Assemblyman Frederick Madison Roberts.

The historical and scientific evidence to resolve this controversy starts with what people said about it at the time.  Jefferson had a mortal enemy in James Callender, a muckraking journalist.  In 1802, two years after Jefferson became president, Callender wrote that Jefferson kept a “wench named Sally” as his concubine.  “By this wench Sally, our president has had several children.”

Callender was roundly denounced for his attack on Jefferson but Jefferson never specifically repudiated it.  Interestingly, a Jefferson defender once asked whether it was strange that a servant in Jefferson’s house “like thousands of others should have a mulatto child”. Master-slave liaisons were hardly unusual, even among the upper classes.  There was no particular shame visited upon John Wayles for his slave children, nor would there have been upon Jefferson as a Virginia planter.  But this was a president.

After Jefferson’s death in 1826, Jefferson’s grandson and chief defender of the family reputation, Col. Thomas Jefferson Randolph, decided it would do no good to deny Jefferson family parentage. One of Sally sons looked so much like Jefferson he could almost pass for the master himself. So Randolph settled on Peter and Samuel Carr — Jefferson’s “worthless nephews” — as possible fathers, since they “spent a great deal of their time hanging around the Monticello slave quarters.”

But the slaves themselves didn’t go along with the story. In 1873, a paper called the Pike County Republican, published a series of articles titled “Life Among the Lowly.”   Among these were the reminiscences of 67-year-old Madison Hemings.  In the newspaper account, he says flatly that Thomas Jefferson was his father and the father of Beverly, Harriett and Eston Hemings.  Beverly and Harriett, he noted had “passed” for whites and married into white families.  He had married “colored.”

Fast-forward now 125 years to the scientific evidence.  In 1998, the late Prof. Eugene Foster of Charlottesville, Virginia, decided to do a DNA test to help resolve the two-century old mystery.  All he needed were the right male descendants.  Each male carries the Y chromosome that he inherited from his father.  Certain markers on this chromosome called alleles can be used to show paternity and to show relationships between males descendants of the same man.

This establishes scientifically that at least one Hemings child had a Jefferson father.  There is no question that Sally’s children had the same father.  But of course the test did not determine that the father in question was Thomas Jefferson.

But it did blow a hole in the century-old family denial that blamed all this on the rascally Carr brothers.  Now the family deniers have settled on another Jefferson relative, his ne’er-do-well brother Randolph Jefferson, who often visited the Monticello slave quarters and played the fiddle for dancing.  But the hapless Randolph does not work very well for other reasons.  Nowhere in the 19th Century records, especially in the family denials, are the Hemings children attributed to him.  Randolph seems to have come onto the scene about 200 years too late.

The DNA results have set up a huge academic and cultural row over Jefferson’s alleged children.  On one side are academics and family members who insist the Hemings descendants must be recognized as Jefferson’s, allowed membership in the family association and given burial rights at Monticello’s Jefferson family cemetery.

On the other side are family members who believe it would have been “morally impossible for that relationship to have existed.”  They have enlisted the support of a commission of 13 distinguished historians who determined after a year’s study that “Thomas Jefferson was simply not guilty of the charge” and suggested that the Jefferson controversy reflected cultural disputes among academics.
Hardly. There’s simply too much evidence, in science and history, to give that dismissal much credibility.

In 1902, a Chillicothe, Ohio, newspaper called the Scioto Gazette, ran a piece that began: “About 60 years ago, there came from Monticello, Virginia, to Chillicothe, a remarkably fine looking colored man and his family.  Eston Hemings was of light bronze color, a little over six feet tall, well proportioned, very erect and dignified; his nearly straight hair showed a tint of auburn, and his face, indistinct suggestion of freckles….

“When it was rumored that Eston Hemings was a natural son of Thomas Jefferson, a good many people accepted the story as truth, from the intrinsic evidence of his striking resemblance to Jefferson.”

The author of this article went on to describe a visit with friends to Washington, D.C.,   “While going from Pennsylvania Avenue to the White House (we) came upon the bronze statue of Jefferson, which is located on the broad walk leading from the avenue to the mansion.

“‘Gentlemen, who in Chillicothe looks most like that statue?’ I asked.

So there should hardly be any doubt. California’s first black legislator was almost certainly a direct descendant of one of our country’s most esteemed Founding Fathers.

Tony Quinn is co-editor of the California Target Book, a nonpartisan analysis of legislative and congressional elections, and has written extensively on California’s political history.