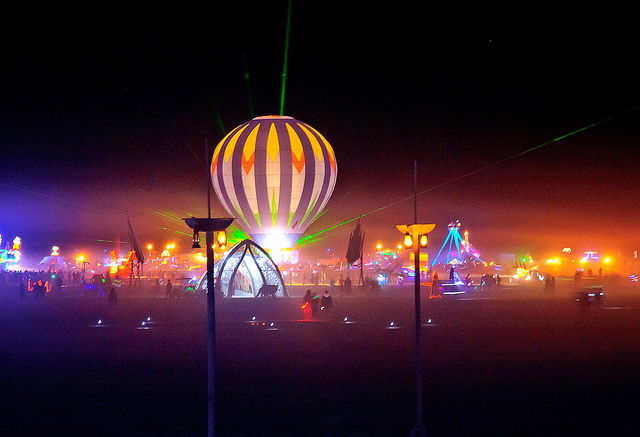 A few years ago, a young man tested Burning Man’s ethos as a “gifting economy” by stripping naked at the gate and walking into the makeshift city of 50,000 people with literally nothing.

Within hours, he’d been given clothing and a tent and was fully supplied for the week. By the end of Burning Man, he’d “gifted” back everything he’d received and walked out naked again. This was designed as a work of art and, as word spread around Black Rock City, it became an impressive statement about the generosity of the event. It was astonishing to me that nobody before him had thought of this.

Burning Man, which starts this week and runs through Labor Day, pushes people into places they would never imagine on the outside. The event includes its own temporary airport, radio stations, police force, post office, and army of portable toilet cleaners. The word “economy” suggests a trading system at Burning Man. But really, despite the gifting principles, everyone is expected to bring what he or she needs to survive. Tickets for the week are about $300. Food, water and shelter is shipped into the festival and carried away by each festivalgoer. Each person is expected to bring, for instance, at least a gallon and a half of water for each day – for drinking, cooking and camp showers.

In Black Rock City, nothing can be purchased, sold or advertised. You can buy ice and coffee drinks, the building blocks of life, at a few designated locations. But that’s it. People must simply give away what they don’t want or need without expecting reciprocation. Bike repair at the various bike shops, for example, is free. But a case of beer or solar-oven pizza is always appreciated for services rendered.

This ethos can be tested sometimes. There is a species at Burning Man called the Sparkle Pony, who is carried along in other people’s Subarus and rented RVs, arriving into Black Rock City with little more than the kindness of strangers. They show up for seven days in an unforgiving alkaline environment – the floor of a Pleistocene lake in Nevada where not even microbes survive – with twenty-seven costume changes and little else. “The playa provides,” they’ll dreamily say, as their haggard campmates erect complicated shade tents under the punishing sun and unload their cars with half the contents of the San Francisco Costco. Unlike the man who walked in naked, there is no unique statement about the Sparkle Pony – they’re mostly lazy.

Some critics of Burning Man see hippies cramming their RVs at Wal-Mart and think everyone is pretending to survive in the desert when they are really just hypocritically transferring their consumer culture into a different place for a week. And there is a tremendous amount of stuff shipped into the desert – mountains of it.

But that’s a straw man. Burning Man is not an environmentalist event, and was never created as such, although the levels of recycling and alternative energy vehicles at the event are remarkable. Bringing what you need is required simply because there is no commerce and because you are in the middle of the desert. There are no restaurants, no cash bars, and no T-shirt booths. Survival is not the central point of Burning Man; it’s just what happens. The point of Burning Man is self-expression, or “radical” self-expression, a term you hear a lot out there. And as an act of radical self-expression, it’s one of the great human events, an astonishing spectacle of ingenuity, creativity, art, dancing and music.

How does this happen? How do tens of thousands of strangers build a city and live together in a spirit of playfulness and cooperation, where violence and harsh judgment is almost unheard of? I would suggest that removing the dozens of commercial transactions in our daily lives plays an important part in freeing people, at least for a week, to live creatively. It’s not a practical way to live – you cannot walk naked into Anaheim and immediately be handed food, clothing and shelter – but it’s an important statement about the way we live our lives outside of Burning Man.

Take costumes. People are encouraged to express themselves by wearing costumes at Burning Man. But it’s rare to see someone dressed up as a character from a movie like “Star Wars” or “Star Trek,” simply because people realize that they would be adopting someone else’s commercially successful creativity. You’d think in this crowd that a hundred people would come dressed as Klingons or Chewbaccas, but it almost never happens. The only major exception is a theme camp straight out of “Mad Max,” including a full-scale Thunderdome. But “Mad Max” is just indie enough that this camp gets a pass, and besides, the Black Rock Desert and Burning Man are the perfect environments to live your post-apocalyptic fantasies. For the most part, without the choices handed to us by the commercial market, creativity blossoms. You see the most inventive, outrageous and comical costumes out there, and sometimes just nothing worn at all.

For me, one of the most jarring aspects of Burning Man is its ban on advertising. One of the ten principles of the event reads: “In order to preserve the spirit of gifting, our community seeks to create social environments that are unmediated by commercial sponsorships, transactions, or advertising. We stand ready to protect our culture from such exploitation. Resist the substitution of consumption for participatory experience.” To see a city without any stores or advertising is remarkable. For a week, you see no Pepsi billboards, no mattress ads, and no Spam spam on Gmail. Nothing. And then you start realizing things about your life on the outside, like how Taco Bell keeps in contact with me (through its ads) more than my friends.

So this is what happens when people aren’t told what to do: They start using their imaginations.

At Burning Man, some of that creativity is profane or blasphemous; I once walked by a “Wet Burka Contest” being conducted in the middle of a dusty street, four women lined up on a platform. You get the idea. Some of it is simply mind-blowing, as the hippies might say: Enormous galleons gliding across the desert. Boulders balanced on anchor chains. A roving Tesla Coil on a truck controlled by a man in a metal suit, Dr. Megavolt. An ornate temple the size of a football field devoted to the dead and constructed out of the discarded wood from a toy factory. And a thousand camps set up by other participants for afternoon Rochambeau contests, for drinking absinthe, for free advice.

A friend of mine once dressed in a housecoat, took an ironing board to the middle of open desert and started ironing clothes while watching telenovelas in Spanish on a portable TV and weeping. He was a big hit.

Robert Salladay is senior editor at the Center for Investigative Reporting, and lives in Sacramento.