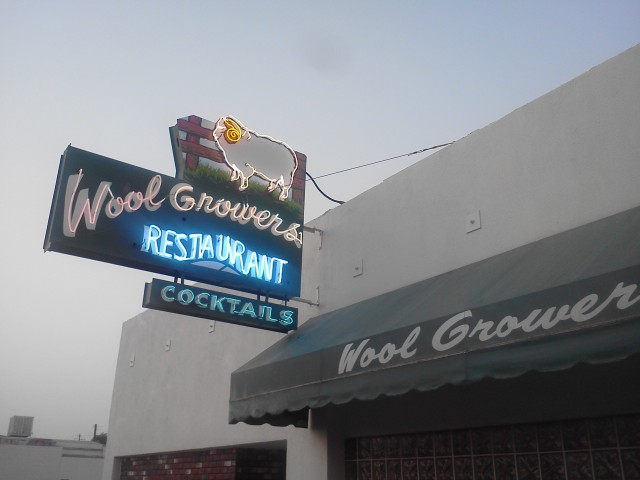 The headlights of my father’s car illuminate the road to Meadows Field Airport like something out of a Hitchcock movie. The fog swirls and eddies about us as we move along at 40 miles per hour. At 5:30 a.m., there is nothing we can do to thin it out. When we slow for a red light, the fog dawdles, gliding thickly over the side of our car. It smells vaguely of dirt and alfalfa and almost seems, in its coiling thickness, to be murmuring to us. As a child, I feared the fog. I knew it claimed the cars of those who didn’t understand its hidden dangers. In the near-desert climate of the San Joaquin Valley, the ground fog rises from the warm earth–Tule fog–an indication to the citrus farmers in my family that we won’t lose an orange crop to the December freeze.

Bakersfield, my hometown, sits at the southern end of the San Joaquin Valley just 100 miles north of the glittering lights of Los Angeles. The population, now more than 350,000, has nearly tripled in size since I was born in the ’80s. Most of that growth manifested itself in chain restaurants and shopping malls. As a teenager, I longed for those sorts of outlets, but now they all blur together. Summer days in Bakersfield are hot, often in the triple digits, and rain is infrequent, but the soil is fertile and sodium-rich. It is a mecca for farmers of nearly all crops.

The fog is something I can try to describe in a series of corny colloquialisms, but I ultimately fail to capture it. Bakersfield is like that, too. It’s a city where in the same breath its residents will knowingly laugh and admit it is no cultural rival of San Francisco–and then fiercely defend it for what it is.

You know you’re in Bakersfield by an enormous curved yellow arch spelling out “BAKERSFIELD” that stretches across Buck Owens Boulevard on the northwest edge of the city. It’s like a neatly printed “FIDO” on the tag of a mangy family pet. This town is built on steel-pedal country music, a natural wealth of petroleum, NASCAR, and a population of Dust Bowl Okies, Basque people, Mexican immigrants, and farmers who have put all their savings into the next big crop. My parents are transplants, and I am a native, but it took me years of living on the east coast to realize that simple fact. I am not a native of “just north of L.A.” nor of a place known as “my father is from the Bay Area and my mother is from North Carolina.” I am simply from Bakersfield.

With each year that I live in Washington, D.C., I am a less frequent visitor home. I moved to D.C. to become a big-city reporter, an idea I conjured up from 1940s movies where wisecracking gals get their story and hard-nosed editors learn a lesson. I’ve grown to love the place–its cosmopolitan feel, its lamp-lined streets, its history, and its frenetic pace. I have loyalties to two cities now, and my divided allegiances are revealed during moments when I am least prepared to defend one place or the other. (I can respond fine with some time to think, but I’m not always so quick on my feet when it comes to verbal challenges. One reason I like writing.)

A late-night encounter with some haughty northern Californians in a D.C. fast-food joint ends with my usually poised sister snarling that our hometown is more than just a collection of meth addicts. At a Bakersfield wedding reception, I find myself pitied for living in close proximity to so many “liberal Democrats” in D.C. I’m tongue-tied on a job interview when a former Californian asks me what it’s like to grow up in a city that is often the butt of Jay Leno’s jokes. Do I defend my beloved “Bako”?

I find myself in one such situation on a recent trip home at an annual dinner for several families at a local Basque hangout. It is a dinner I’ve spent nights dreaming of in D.C.: cold iceberg salad dressed in olive oil and vinegar, vegetable soup topped with pinto beans and homemade salsa, hard jack cheese sliced thinly, crispy, twisted French fries, and fried chicken doused heavily in minced garlic. The parents still sit at one end of the long table and their 40-30-20-something children on the “kids” end, though the unmarked bottles of red table wine flow freely between both.

This dinner is actually larger than my family’s Thanksgiving and more predictable as well. There will be plenty of ribbing of significant others who are not from Bakersfield, and a fair amount of dirt will be dug up from the past. Babies and new handbags will be admiringly passed around among the women. Diners will change seats throughout dinner to relay gossip from three seats down. The waitresses call you “hon.” By the time the second helping of pickled cow tongue has been passed around, talk has turned to my career and future plans.

“When are you moving back to California?” I get asked several times. The not-so-veiled opinions of Barack Obama start to emerge, too, as though I am his personal ambassador from Washington, D.C. The question of what exactly I’m doing “over there” gets me thinking as well. 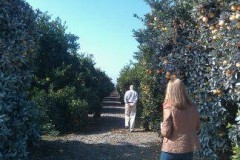 Someone once told me, “The more words it takes to describe what your career is, the further you are away from actually doing something.” My friends in Bakersfield are teachers, lawyers, small business owners, and, mostly, farmers. Most inhabit a world of one-word job titles like cards from the “LIFE” board game. And when Bakersfieldians talk about what they do, it often revolves around something they’ve produced from the earth: oranges, almonds, carrots, milk, cotton. When I talk about what I do in D.C., I talk about the ideas and concepts I try to capture in my writing. I struggle to define how I’m contributing to society, because I come from a world where people put their hands in the dirt. In Washington, D.C., we argue over what laws may or may not be passed or how much money should be extracted and spent; meanwhile, the sons and daughters of Thomas Jefferson’s ideals are out there toiling for our dinner.

The truth is I often dread going home to try and answer questions from the friendly neighbor walking her dog or the high school friend at the next table in the restaurant. I suppose I dread it because I don’t have it all figured out in Bakersfield terms. What feels like a perfectly acceptable paycheck-to-paycheck lifestyle of a journalist in D.C. does not feel so glamorous in my hometown. I dread the measurements of Bakersfield being applied to my life in Washington. They don’t apply, of course–the cities are vastly different–but they still gnaw at me. After I’ve been home for about 72 hours the dread quietly leaves my body, and I start appreciating how much my family takes care of me and how much my friends seem to take an interest in what I’m doing. (Especially when I say I’m writing a piece about Bakersfield. Everyone, it seems, wants to make sure that it’s something that reflects well on our beloved home.)

It is colder in D.C. and not everyone is friendly, but those are easy trials to overcome when you feel you have a whole town behind you, rooting for you to succeed. I suppose it would be better for my writing career if I despised my hometown, if I were scarred by my God-fearing, Republican upbringing. But the older I get the more I realize what an idyllic childhood I had. Shooting BB guns for target practice in the front yard, singing Christmas carols on mule wagons, riding bikes to school with the neighborhood kids, and listening to my parents and guests from neighboring homes sitting around an outdoor fireplace laughing late into the night over some glasses of locally vinted wine. Bakersfield helped me define as an adult what a community ought to feel like: warm, supportive, close-knit.

My east-bound airplane shrugs off the fog as it climbs the sky. The morning sun is making outlines over the Sierra Nevada Mountains, though the light can’t yet reach the patchwork of farmland below that defines the boundaries of my hometown. I had dreaded going home, yes, but I’d also forgotten how much I loved being home. You’ll be back for Christmas, I tell myself.

Paige L. Hill is a writer living in Washington, D.C. writing for a variety of publications on architecture, energy, green building, and, occasionally, personal history.