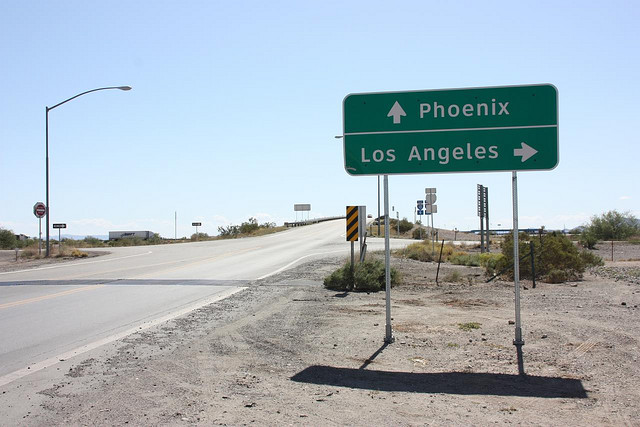 My aunt Marta asks, When are you coming back home?

My great-grandmother arrived in the city’s center as a teenager, dragging a suit trunk and memories of her dead parents from the old country. She arrived by train before Prohibition and began work in the garment district at a sewing factory off Broadway and 7th. She ate from the city’s first lunch trucks-mule carts from which men sold tamales or tacos.

Today, my cousin Carlos sends me a picture from his iPhone of the gourmet trucks gathered in a designated parking lot for second Thursdays, Downtown L.A.’s monthly art walk. He’s holding a Korean taco, just one of the menu options from Kogi. White Rabbit cooks Filipino food with an American and Mexican twist. The food-truck industry is a fusion similar to that of the region’s people. Do the walk. You’ll see.

Visits to L.A. revolve around food. It’s a must-stop at my foul-mouthed grandmother’s house in East Los Angeles, off Bradshawe and East Sixth, for a bean burrito and some good banter. Down the street, my father is at La Carreta, off Cesar Chavez Boulevard, for breakfast with his buddies. The scene, ripe for the start of a joke: A judge, a priest, and a college professor take turns with sections of the L.A. Times, cups of café con canela in hand. My father and his friends have come to know the owners so well they’re treated like family. They have their own key so they can open up the restaurant and get the coffee going.

Across town, a horde of people gathers at Aunt Marta’s. Another baptism, birthday, or football game, possibly all three. The food: chicken mole with a side of macaroni salad, Hawaiian-style. Visits to L.A. are busy, sometimes overwhelming. The rush of traffic has purpose. Aunt Marta’s OK with the fact that I moved to Phoenix for grad school, she tells me. She just wants to know what I’m still doing there post-graduation.

What am I doing? Teaching poetry. Writing. Carving out my own space. Building community over bread-planting bits and pieces of L.A.

Phoenix is like that. It’s a lot of open space, room to spread your arms out and breathe, and a lot of people from somewhere else.

Every day is a clear one in Phoenix. The red rock from Papago Park calls through the semi-smog-free streets. The hiking here is great and easy to get to. The people I know here get together over food or Bocce in the park. They’re from New York, Ohio, Montana, Massachusetts, and California. And even when they’re just here until they piece things together (or not), they leave behind enough to help this young city develop its own sense of culture.

My family has roots here too. My great-grandfathers mined in Wilcox and Clifton in the late 1800s. They took their own bean or beef tacos to work. Today, some of the best tacos I can find in the valley come from a lunch truck parked off McDowell Rd and 32nd Street. It’s a hole in the wall on wheels. These are the best places to eat, places that mimic the comforts of home.

The Phoenix food scene is as old as the city. Lunch trucks have followed workers. And Phoenix has had its own art walk since the ’90s. Down Roosevelt row, old bungalows converted into bars or coffee shops secure a First Fridays crowd. Food truck Fridays is growing too. Jamburritos has created a fusion of Cajun and Mexican. Downtown does not lack art or cuisine.

The drive between Los Angeles and Phoenix is only five and a half hours, if you speed up a little between highway patrol spottings. It’s a short time in the car relative to the time spent in either destination city, but that time counts. Five hours is enough time to think about the people you are leaving behind.

For me, it matters which direction I’m heading. Radio stations are better in L.A. When you’re heading east, the good music fades and static sets in at first sight of all those windmills. They signal that it’s time for This American Life podcasts or a random shuffle from the iPod.

The weather is open for debate; it depends on the season. Most of my siblings have birthdays in June. Mine is in March. Growing up in California, they had barbecues, pool parties, water balloon fights. I had movie night. In the past six years, I’ve celebrated my birthdays outdoors. March is a great time to be in Phoenix.

The desert landscape blurs the border between California and Arizona. Los Angeles might be a melting pot, but it hasn’t always been so kind to the blending of cultures. L.A. has grown. It is what its citizens want it to be. And in all that sprawl, LA is leading the way as a cultural center in the West. Phoenix, despite a wave of depressing laws and a culture of privatization, is experiencing growth in its communities, in its art, and in its population of people who look to L.A. as an older brother who can lead by example.

Phoenix is close enough to visit my older brother in L.A. over a weekend. But it’s far enough that I don’t have to deal with day-to-day family hiccups. It’s best this way. Phoenix gives me room and has room to grow. Heading in either direction, I always say, I’m going home.

Fernando Pérez is from Long Beach, California. He currently resides in Tempe, Arizona, where he teaches writing at Arizona State University and Mesa Community College. His poetry has appeared in journals such as Faultline, Crab Creek Review, The New Mexico Poetry Review, and Furnace Review.