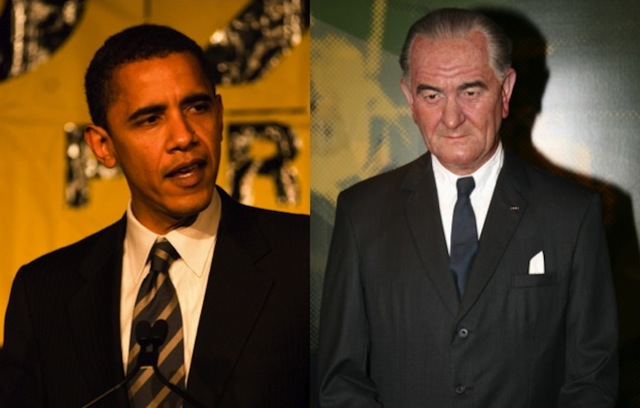 The main news event of today has clearly been the Supreme Court’s forceful Equal Protection decision in the DOMA case. Many view it as a prelude to a future decision declaring a national constitutional right to marry whomever you want. Last year, Zócalo’s editorial director, Andrés Martinez, penned an article arguing that the “privileges and immunities” of American citizenship shouldn’t be defined by the state you happen to live in.

The debate over gay marriage pits two visions of America against each other, and I worry that the least enlightened one, bolstered by President Obama, is carrying the day.

I am not talking about the issue of whether marriage should be limited to heterosexual couples, mind you, but about the timeless question of whether we are to be one cohesive nation whose citizens enjoy the same “privileges and immunities” throughout–or whether, by contrast, we are to be a patchwork of states and communities whose residents’ individual rights vary according to their local community’s prevailing “standards.”

Earlier this month, the president told ABC News that he is personally in favor of gay marriage but wants the issue resolved by states. That’s deeply unsatisfying. It’s illogical for the nation’s first African-American president, a former Harvard Law Review editor and constitutional law professor at the University of Chicago, to say that the right of gays to marry whomever they want is a clear matter of equality and due process but then leave it up to the states to go their own ways. Good luck with that, if you’re a same-sex couple wanting to get married in Alabama.

President Obama was quick to say in his interview that the definition of marriage (like the issue of slavery in the first decades of our nation, I might add) has historically been a state prerogative. Never mind that in 1967 the Supreme Court struck down Virginia’s ban on interracial marriage, holding that the ban violated the Equal Protection and Due Process clauses of the Fourteenth Amendment. Writing for a unanimous majority, Chief Justice Earl Warren wrote, “Marriage is one of the basic civil rights of man, fundamental to our very existence and survival.” The Constitution, Warren added, required that “the freedom of choice to marry not be restricted by invidious discriminations.” In other words: Buzz off, states.

Both competing visions of social cohesion–the national one and the communitarian one–have long co-existed in tension (“tension” being a polite euphemism to cover a brutal civil war as well). Our Founding Fathers subscribed to the belief that being an American transcended one’s narrower state identity while still bequeathing us a nation in which some states outlawed slavery and others allowed it to flourish.

The Civil War’s outcome, enshrined in the Thirteenth, Fourteenth, and Fifteenth Amendments of the Constitution, appeared to have settled the matter for good. We would no longer remain what the Chinese in a far different context have recently called “one country, two systems.” Liberty, freedom, equality, and the pursuit of happiness were now going to mean the same thing in Alabama as they did in Vermont.

The South’s states’ rights mantra proved more resilient than anticipated, however, and it took a concerted effort by liberals, leveraging the power of the Supreme Court and the Congress, to restore a sense that we are one nation, undivided, whose citizens should enjoy the same rights and protections, regardless of state boundaries.

The Warren Court’s jurisprudence was the highest expression of national cohesion, and it was echoed at the time by the muscular nationalism of Lyndon Johnson’s Great Society. “There is no issue of states’ rights or national rights,” President Johnson declared in a stirring televised pitch for his Voting Rights Act on the heels of violence in Selma, Alabama, in March of 1965. “There is only the struggle for human rights.”

Included in the speech was a nationalistic sentiment that encapsulated the era’s progressive quest to forge one America. “This is one nation,” Johnson said. “What happens in Selma and Cincinnati is a matter of legitimate concern to every American.”

Today, such a declaration rings more hollow. President Obama’s hesitation to call for a national push to enforce equality for gays–his instinct that this is a matter best left to the states–is considered sensible and wise by plenty of leading progressive thinkers and activists. States’ rights have gone bipartisan.

Today’s revitalized, bipartisan federalism is fueled by two factors. The first is the political “sorting out” of the last few decades. The nation is increasingly split into red and blue states whose politics and cultures overlap less and less. Americans self-segregate into left and right communities, consuming only one or the other’s media and entertainment, careful to filter out “the other.” Liberal Republicans and conservative Democrats are endangered species. Blue states, red states; you know who you are.

As more and more Americans live surrounded by like-minded neighbors, the urge wanes to care about the prevailing norms in a community halfway across the country. If someplace else wants to round up immigrants to deport, ban gays from getting married, or allow residents to carry concealed weapons, what’s it to us? By the same token, if we want to welcome illegal immigrants, allow gays to marry, or ban guns, what’s it to them?

California is at the forefront of progressive federalism. Throughout the Bush years, California was regularly doing battle with Washington to forge its own separate path on any number of issues, from consumer protection laws to medical marijuana and environmental regulations.

That’s why an expanding range of issues, including educational standards and immigration policy, is now seen through the same prism that long defined obscenity: that of community standards. Forget about Cincinnati. Why should people living in West Hollywood concern themselves about the rights of people in Selma, or vice versa? Isn’t that a fool’s errand, whose best-case scenario will be an embrace of the lowest common denominator? Better to live and let live.

The second cause for the rise of a progressive federalism is the widespread exhaustion and unease with the role of the judiciary in enforcing constitutional rights and national standards. It’s now fashionable in liberal circles to believe that Roe v. Wade may have backfired by provoking, galvanizing and strengthening the far right for a generation to come–unnecessarily so, the theory goes, given that state legislatures were working their way, if at different speeds, towards legalizing abortion across the country. Even Ruth Bader Ginsburg, the liberal justice, has made this claim. Recently, Eric J. Segall, a law professor at Georgia State University, applied this argument to the 1954 Brown v. Board of Education decision ordering the desegregation of schools; Segall claimed that, because the Court was too far ahead of society, the decision backfired politically. So it’s not surprising that many leading gay rights activists share a preference for legislative triumphs over courtroom wins.

To my read, though, the constitutional rights of individuals should never be compromised by political expediency or convenience or by polling of majorities to see if they are ready to stomach the protection of another’s rights. Courts don’t, and shouldn’t, have the option of avoiding judicial review because it’s politically messy.

Besides, counterfactual history is more art than science. Who knows how less polarized the abortion issue would be had the courts stayed out of it and the struggle been confined to the political arena? And, I would add, who cares? Progressive federalism may be in fashion, but it’s a sad historical retreat. The American constitutional system is built on a non-negotiable belief that there are certain inalienable rights we possess as individuals and citizens that the state, or the prejudices of a majority, cannot wrest away from us.

Fortunately, those pesky courts are unlikely to allow this “let’s let each state decide for itself” stalemate to last indefinitely. The infamous Defense of Marriage Act (an example of conservatives tactically ditching their states’ rights fervor to advance their social agenda through Congress) is under assault in the courts, and California’s own Proposition 8 banning gay marriage has been struck down by the Ninth Circuit Appeals Court (on admittedly narrow grounds that don’t seem to apply to states that never have allowed gay marriage).

President Obama has been commended, and rightly so, for “evolving” in his thinking on whether gays should be able to commit to loved ones in marriage. Now, hopefully, he will evolve in his thinking about whether he wants to preside over one country, or two.

Andrés Martinez is the editorial director of Zócalo Public Square and a vice president at the New America Foundation.