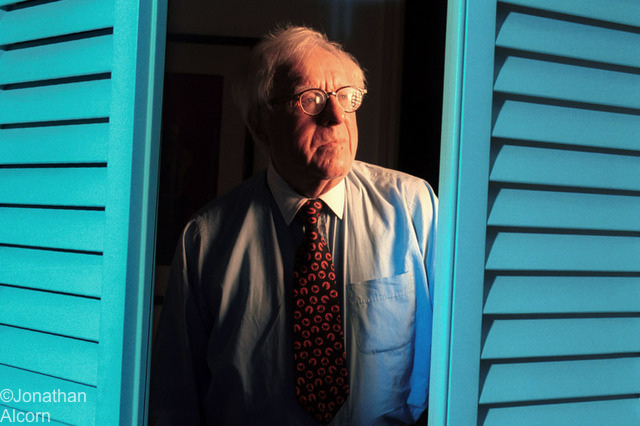 In an international city known for its love of technology and novelty, its mighty freeways, and its complex and mostly harmonious ethnic mix, an automobile-scorning Midwesterner may seem like the kind of anomaly for which the place is justly famous. Ray Bradbury, who died Tuesday at the age of 91, was not, of course, a typical Angeleno. But he was, in his way, an exemplary one.

It was the fields and front-porches of the Midwest that gave Bradbury much of his inner landscape, and a carnival magician back in Illinois who gave his imagination its early, crucial spark. But his teenage years and young adulthood in Los Angeles–he didn’t leave his parents’ house until his late 20s–were crucial to the kind of writer he became.

And while many of his early works–the novel Dandelion Wine, the stories in The October Country and The Illustrated Man--were set either on other planets or in a small-town or pastoral setting abstracted from the writer’s early years, his most poetic and important book, The Martian Chronicles, was as essentially the work of a Los Angeles writer as The Long Goodbye or Ask the Dust.

In his disdain for noise, automation and much of contemporary life–he insisted on using a typewriter, for instance–Bradbury remained in some ways one of the village Midwestern Protestants (Louis Adamic called them the “Folks”) who gave Southern California much of its character in the first half of the 20th century.

But when he moved with his family to L.A. at 14–his father was seeking work in the depths of the Depression, and eventually found it as a lineman–the Southland hit Bradbury hard, and never let go. At times he wished it would.

The historian Carey McWilliams described California’s distinctiveness as “the fact that California has not grown or evolved so much as it has been hurtled forward, rocket-fashion, by a series of chain-reaction explosions.” This is all triply true for Los Angeles. And even without his use of metaphors that seem drawn from science fiction, McWilliams’ words evoke Bradbury, whose work was split between a boyish excitement for the future and a bone-deep nostalgia for the sunlit small-town past.

At times, Bradbury leaned harder in one direction or the other. “People ask me to predict the future,” he sometimes said. “When all I want to do is prevent it.”

Bradbury and his family moved to the city in 1934. He attended Los Angeles High School and joined the Los Angeles Science Fantasy Society, which allowed him to discuss his work with writers like Henry Kuttner, Jack Williamson, and Forrest J. Ackerman, who later described him as a “loud and boisterous” kid.

He had other passions as well. “I was madly in love with Hollywood,” he told Playboy in 1996. “We lived about four blocks from the Uptown Theater, which was the flagship theater for MGM and Fox. I learned how to sneak in. There were previews almost every week. I’d roller-skate over there-I skated all over town, hell-bent on getting autographs from glamorous stars … Or I’d spend all day in front of Paramount or Columbia, then zoom over to the Brown Derby to watch the stars coming or going.”

“I was one of Them: The Strange Ones,” Bradbury said of his childhood. “The Funny People. The Odd Tribes of autograph-collectors and photographers. The Ones who waited through long days and nights, who used other people’s dreams for their lives.”

Soon after graduating high school, he met science-fiction titan Robert Heinlein at Clifton’s Cafeteria and was inspired by the author’s emphasis of human concerns over technology.

His family could not afford college, but he continued writing–he’d started on butcher paper–selling stories to the pulps and then the slicks. In the mid-’40s, a young assistant at Mademoiselle, Truman Capote, pulled a story from the slush pile. Around this time, Bradbury met a young bookstore clerk, Marguerite McClure; she later became his wife.

In 1950, Bradbury recognized Christopher Isherwood in a Santa Monica bookstore and handed him a copy of his new story collection, The Martian Chronicles. Isherwood’s review in Tomorrow magazine, which noted the young writer’s lyricism, gave Bradbury some of the same literary respectability that W.H. Auden would offer J.R.R. Tolkien a few years later.

Around this time, Bradbury was writing Fahrenheit 451–about a world in which firemen burned books and the houses that contained them–in the basement of UCLA’s library, typing like a demon in between pumping dimes into the typewriter. The book’s fiery hell was inspired by what he saw as a trivialization of culture, but also by the Red Scare in Hollywood’s Screen Writers Guild.

Genius, of course, can develop anywhere. But it’s striking to see how many of the greatest, most ambitious science-fiction writers of the 1950s, ’60s, and ’70s–Ursula K. Le Guin, Philip K. Dick, Frank Herbert–hit their strides on the West Coast, especially California. Others–Heinlein, Robert Silverberg–moved here during important moments in their careers.

Why did both hard-boiled crime fiction and the most important generation of science fiction develop so disproportionately on the West Coast? For the latter, the existence of a vigorous science infrastructure here certainly helped, as did the region’s general orientation to the future rather than the past.

But the distance from a literary establishment that might have disapproved was also crucial. Los Angeles, Bradbury told Newsweek, was “a great place to grow up as a creator because there’s no intellectual hierarchy. I remember going to a party in New York about 35 years ago. They all called me Buck Rogers and Flash Gordon. I said, ‘You, ma’am, your name and phone number? And you, sir, your phone number? And you, sir?’ And they said, ‘Why are you taking our phone numbers?’ I said, ‘Because the night we land on the moon, you’re going to get called.’ I was in London when we did. I called three of them, and when they answered I said, ‘Stupid son of a bitch,’ and hung up.”

Though slowed by a stroke in 1999, Bradbury remained visible around Los Angeles. He could be a genial and, especially near the end, curmudgeonly presence, denouncing political correctness, politicians, “women’s libbers,” the Internet, magazine ads, and a general dumbing down of the culture. He was enthusiastic about space travel but suspicious of many other kinds of technology.

He was appalled when, after the Rodney King trial, Mayor Tom Bradley–a longtime friend of the writer–denounced the verdict, and, to Bradbury’s mind, helped spark the ensuing conflagration. “I don’t approve of any mob anywhere at any time,” he told Playboy. “If we had not controlled it in L.A., all the big cities in this country would have gone up in flames.”

Government was not as reliable, he sometimes said, as “enlightened corporations.” He said that mall developers–some of whom he worked for, in his assistance of the design of the Westside Pavilion and Glendale Galleria–would revive American cities. But his politics were hard to pin down. He was deeply disappointed, in a way that didn’t track simply on a left-right scale, by the way public schools had moved away from basic reading and writing.

He had made clear in Fahrenheit that alongside the censorious urge, people will retain a powerful impulse to tell stories, to read, to learn. But he knew that people were capable of ignoring what was important, and he came to see that the institutions that support reading–libraries and bookstores, which he saw dwindle during his years in L.A.–were fragile. “Libraries raised me,” he once said. “I don’t believe in colleges and universities. I believe in libraries.”

There’s a self-congratulation to the way people read Fahrenheit, which became part of the NEA’s The Big Read initiative as well as several “One City, One Book” programs. Southern Californians are justifiably proud that Bradbury is one of them and that he wrote the book here. But the author himself was aware of the contradiction that Southern California cities stand out in their recent decimation of the temples of the written word–the very libraries that had allowed this once-poor son of the Depression his education.

Throughout his career, Bradbury was distrusted by the science-fiction fraternity for his lack of interest in hard science and skepticism toward technology. He routinely denied he was a science-fiction writer, often calling himself an entertainer. But in his best work, he did what the earliest storytellers did, crafting myths, allegories, and metaphors to help us understand a confounding and rapidly changing world. This gift was most pure at the beginning of his career, in the stories collected in The Martian Chronicles.

The book’s first story–“Rocket Summer”–describes the excitement among the children in an Ohio town in 1999 as rockets take off for Mars. (“A flooding sea of hot air; it seemed as if someone had left a bakery door open.”) The autumnal second story, “Ylla,” shows a kind of twilight of the aliens who live there. The stories that follow take place on a Red Planet that seems to come after Edgar Rice Burroughs’ Barsoom novels–Mars is now a planet–size ghost town, haunted by the death of a once-noble civilization. (In The New Yorker’s recent science-fiction issue, Bradbury writes about standing on his grandparents’ lawn and declaiming Burroughs tales to friends and family, and staring at Mars on summer nights. “I yearned to fly away and land there in the strange dust that blew over dead-sea bottoms toward the ancient cities.”)

Mike Davis saw in Bradbury’s work the influence of L.A. noir. The Martian Chronicles, he writes in City of Quartz, shows the collision of the American “quest for new frontiers and poignant nostalgia for small-town America. In a sense, Bradbury took the angst of the dislocated Midwesterner in Los Angeles and projected it as extra-terrestrial destiny.”

Atypically for its time, its stories attend to subjects like environmentalism and the sins of imperialism. The Martian Chronicles’ most poignant story–and most Californian, in the hopeful sense that we used the term for most of the last century, but full of pain and loss, too–comes at its very end.

In that story, “The Million Year Picnic,” an earth family takes a rocket ship to a Red Planet that has been abandoned. They soon take a fishing trip, and the father begins to promise his children that they will get to see Martians–a race they consider mythical and long-dead. After the children badger him repeatedly, he takes them to a canal, and shows them, in its cool, rippling waters, the Martians–their faces reflected back at them.

It’s a sentiment that resonates with almost anyone who’s come to Los Angeles. Which means, most of us.

Scott Timberg is a Los Angeles-based writer whose work has appeared in Salon, the Los Angeles Times, and The New York Times. He runs the blog TheMisreadCity.com, dedicated mostly to West Coast culture. His anthology of the same name, co-edited with Dana Gioia, was dedicated to Ray Bradbury.