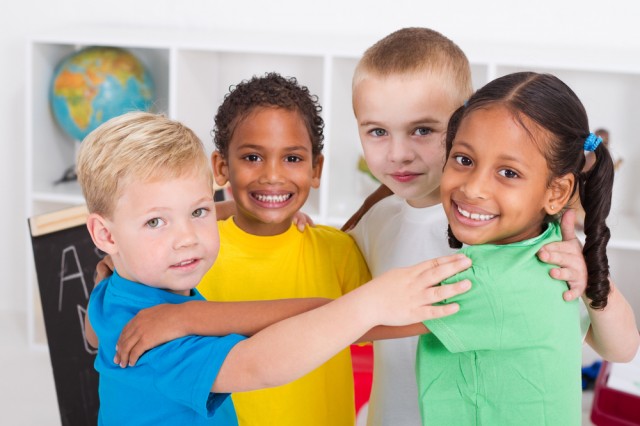 At a conference on cities and political diversity in Pittsburgh a few years ago, a gentleman from Philadelphia was proudly ticking down the demographic menu offered in his big-city community. He paged through the atlas of countries represented in his neighborhood as proof that the central city had become a model of peaceful, vibrant, and democratic heterogeneity.

I asked, “Well, how many Republicans do you have there in your diverse neighborhood?”

“Oh,” he sputtered, “there aren’t any Republicans!”

We cluck about our growing “diversity”—I often see multi-colored “Celebrate Diversity” bumper stickers here in hip Austin, Texas—but that’s not really the way most of us live. Yes, many neighborhoods have greater ethnic diversity than ever–and live more harmoniously with such diversity than ever–as the gentleman from Philadelphia seemed to suggest. But this demographic diversity masks an increasing homogeneity of belief within the communities in which we live.

It’s this combination–of increasing conformity within our immediate surroundings and increasing inequality in education, income, and even life expectancy between different regions of the country–that is making it harder for states, and the nation, to function.

Statistician Robert Cushing and I have written a lot about the political segregation that is taking place in the country. Over the past three decades, most places, as measured by voting in presidential elections, have become increasingly Republican or Democratic. Half the nation now lives in a county where, in elections that are very close nationally, the local results are landslides. This is true even though we are citizens of a country that is split down the middle politically. The country has a wider range of political beliefs than it used to have–far different from the “tweedle dum, tweedle dee” political party conformity of the 1950s and early ’60s–but, again, these differences are between, not within, communities.

You can see the spread of politically homogenous communities since 1976 in the series of maps below. 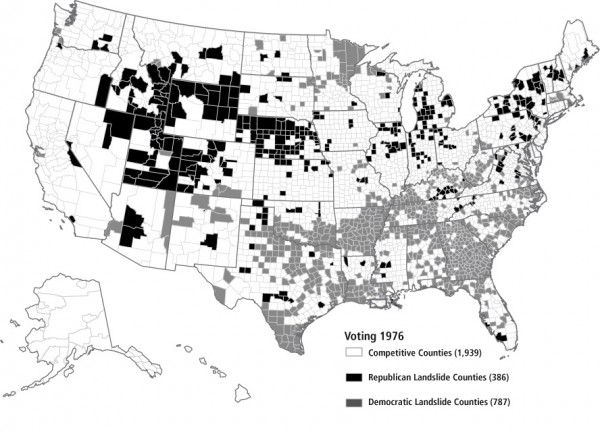 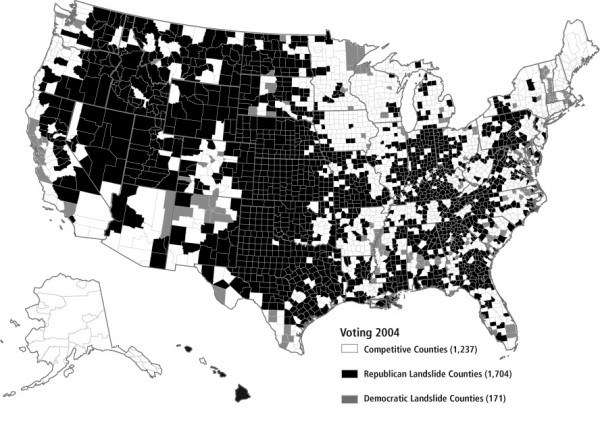 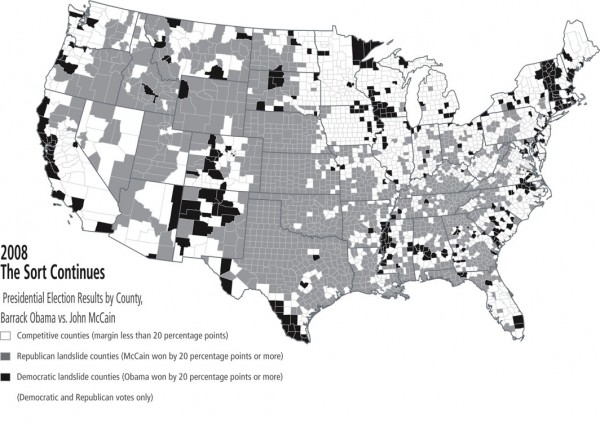 Segregating by way of life

Political segregation, however, is just one way in which the country is separating. Educational segregation and economic segregation are arguably even more severe. Bob Cushing and I began our work together trying to discover why some places in the United States were booming while others were inert. We found what is now a four-decade long process of sorting. Some of the most striking statistics can be found in education. 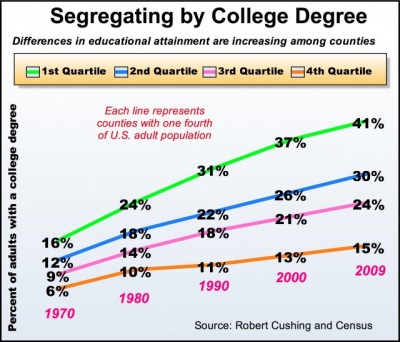 In 1970, college educated adults were relatively evenly distributed across the country. You can see in the chart above that, 40 years ago, in the top 25 percent of counties by education, 16 percent of adults had at least a college degree. In the bottom 25 percent of counties by education, six percent of adults had a college degree. There was only a 10-point difference between top and bottom. Over the next 40 years, however, educated people congregated in some places and not in others. By 2010, the percentage gap in college degrees between the top and bottom quartile had widened to 26 points. Educationally, the nation is segregating.

The clustering of educated people in some places and not in others has had all kinds of other effects. Economies diverged. Patent applications clustered. Cultures began to differentiate. One of the more interesting experiments Bob Cushing conducted involved a comparison of data on technology and patents with data on how people lived.

These social differences began showing up in politics. In 1980, the 21 high-tech cities voted much like the rest of the nation. But by 2000, these cities had become staunchly Democratic. Al Gore led George W. Bush nationally by about half a million votes. In the 21 high tech cities, Gore beat Bush by 5.3 million votes.

Life expectancy rose across the U.S. until the late 1970s. In the 1980s, health care researchers began to notice a reversal, but only in certain places. From 1999 to 2009, the average lifespan of women in more than 550 American counties declined–even as longevity in the rest of the country continued to increase.

Lifespan was only one sign of a bigger change. In the 1970s, rural and urban places had similar rates of suicide and attempted suicide. By the late 1990s, rates of suicide were 54 percent higher in rural areas than in U.S. cities. Linguists reported that regional accents have been strengthening as we polarized in the way we talked. Family formation patterns were also diverging.

And these differences now show up in the way we vote.

Vanderbilt political scientist Marc Hetherington tells us that the greater the approval of corporal punishment for children in a state, the higher the vote is for the Republican presidential candidate. Demographer Ron Lesthaeghe reports that the more family formation patterns in an American community resemble those in Denmark (women marrying later, if at all; more single parents; etc.), the greater the vote in that community is for the Democratic candidate. That relationship between Danish-style family behavior and the Democrats strengthened from 2004 to 2008.

Social organizations are sorting in much the same way. Churches cater to political and social points of view. Beginning in the 1970s, seminaries began teaching the “homogenous unit principle” of church membership–the more homogenous the congregation (the more its members had in common when it came to tastes in food and music, types of clothing, and political attitudes), the more likely it was to grow. News media fill political niches. Broad-based civic organizations (Elks, Lions, Rebekahs, Optimists) have dried up, replaced by groups with particular political or social points of view (Sierra Club, Burning Man, the Federalist Society).

In 1956, the economist Charles Tiebout theorized that people would “vote with their feet” when it came to finding the proper mix between taxes and services. Tiebout predicted that this economic sorting would also have a social component. He wrote: “Not only is the consumer-voter concerned with economic patterns, but he desires, for example, to associate with ‘nice people.’”

And that is what’s happened. “Do people fundamentally end up going to live where people who look like them live?” asked G. Evans Witt, CEO of Princeton Survey Research Associated, rhetorically, in an interview. “Yes, pretty much. But it’s not look. It’s act like them, think like them.” We also worship, volunteer, and get our information from the like-minded.

Our homogenous lives offer reassurance and comfort–and blind us to how people live and think just a few miles away. Consequently, we have less understanding of or sympathy for our fellow citizens.

Nebraska political scientist Elizabeth Theiss-Morse told me of focus groups she held in Omaha. “People said many times, ‘Eighty percent of us agree, we all want the same thing. It’s those 20 percent who are just a bunch of extremists out there.’ It didn’t matter what their political views were. They really saw it as us against this fringe. The American people versus them, the fringe.”

In Omaha, folks agreed on where the fringe lived, Theiss-Morse recalled: “Those people in California are really weird.”

The fringe now live everywhere–in California or Wyoming or New York City or West Virginia. Or to be more precise, wherever we don’t.

Bill Bishop, a fellow at Arizona State University’s Center for Social Cohesion, is co-author, with Robert Cushing, of The Big Sort: Why the Clustering of Like-Minded America is Tearing Us Apart; and he is co-editor of The Daily Yonder, a web publication that covers rural America.