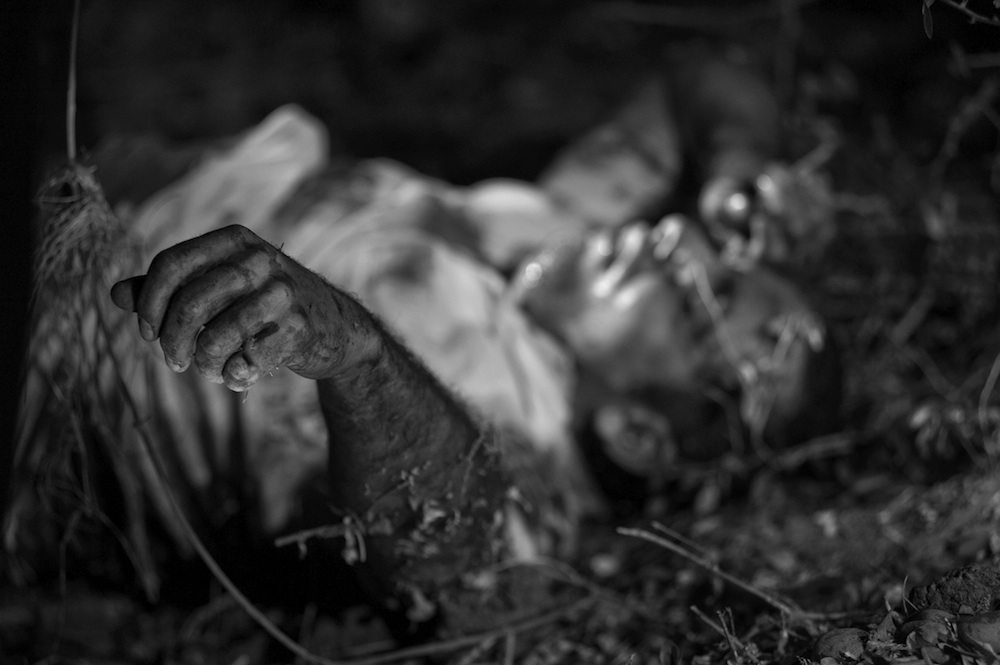 Last March, responding to news of a killing, I found myself walking in the darkness at a crime scene in Quila, a small community outside Culiacán in Sinaloa, the state that is ground zero in Mexico’s drug war. I could hear helicopters overhead complimented by the sound of crickets on the ground as my feet made crunching noises on the gravel road. There was an orange glow from the flames of a bullet-riddled vehicle. There were no bodies immediately visible, until I ventured into the woods, following a police forensics team to encounter the body of a man killed by the Mexican military. The victim seemed to be in his late 30s, and his eyes were frozen open in a lifeless daze. Rigor mortis appeared to be setting in. I struggled with the dense brush in the darkness, moving about until I found a view of the body that allowed me to take several different photos that conveyed the brutality of the ongoing war. A police officer lit the scene with a floodlight as the forensics team began work collecting evidence. This would be the second body I photographed that night after arriving at the local airport and one of 48 bodies I would see over two weeks. Months earlier, I had photographed the aftermath of 64 killings during a two-week stretch of tragedy in Ciudad Juárez.

For the past year, I have been focusing my attention on the drug violence in Mexico, where, six years since the conflict first erupted onto our consciousness, the situation remains grave. I have photographed my fair share of violence before Mexico, having spent a great deal of time in Kandahar, Afghanistan from 2006 to 2010. Mexico is no Afghanistan, but if you focus on the tragically large body count and nothing else, it can start to seem quite similar. I have also worked to document poverty, mental illness, victims’ families, and many other issues that can add layers to explaining the ongoing violence there.

What are we to do with the never-ending stream of violent imagery flowing out of Mexico these days? Do 48 photographs of dead bodies create enlightenment? These sorts of questions aren’t new. They go back to one of America’s earliest encounters with gruesome photographs—Alexander Gardner’s images of Civil War casualties from the Battle of Antietam in 1862. Some 12 hours of fighting had claimed over 22,000 casualties, and images of its aftermath forced Americans to confront the true cost of war.

Like all photographers who document violence and death, I often struggle with what to show and how. At the same time, in an age when everyone has a camera in a phone connected to online social media, it’s increasingly difficult to filter or mediate any imagery.

Some of the most influential pioneers in this genre of photojournalism have been the photographers who captured the havoc of organized crime in places like New York City and Chicago during the 20th century. George Silk’s classic black-and-white photograph of Albert “The Executioner” Anastasia for Life magazine in 1957 is one of the seminal examples of this type of work. Several men, most likely police and reporters, stand among mirrors and barber chairs under fluorescent lights going over what just happened, while on the ground lies the lifeless body of Mr. Anastasia, his face covered by barber’s towels. Viewers of the image in 1957 saw just how brutal—and how close—the underworld was to them, showing up in places as mundane as barbershops. Before Silk came many other skilled crime photographers, including Weegee, aka Arthur Fellig, a news photographer in New York City who began working in the 1930s and became synonymous with photographs of mafia-related murders.

For decades, the New York Daily News has been infamous for publishing crime scene photographs, sometimes to the outrage of the public. But that negative reaction has often been a powerful spur to awareness and change. Daily News photographer Frank Castoral woke many New Yorkers up to the danger next door with an iconic 1979 image of Carmine Galante, a mafia boss gunned down at a restaurant with his bodyguard, and he may have created the most iconic of all images associated with organized crime thanks to one haunting detail: the cigar still hanging from the dead Gallante’s mouth. Several years later, one of the last infamous news images of U.S.-based organized crime was of mafia boss Paul Castellano, gunned down outside Sparks Steak House in New York in a coup led by mobster John Gotti.

Few, if any, photographers have captured the criminal underworld as well as Sicilian photographer Letizia Battaglia in her book Passion, Justice, Freedom: Photographs of Sicily, which chronicles Sicily’s decent into chaos in the 1970s and ’80s at the hands of the mafia. The reason Battaglia’s work goes beyond basic news photography is that she provides a deeper context to and understanding of why the violence is happening, the consequences associated with it, and who the affected people are, all gathered into a long-term study published in book form.

When it comes to providing context and story to organized crime, still-news photographers have a competitor in Hollywood. Photographers can usually capture only the aftermath of the violence or the police arrests, while Hollywood can fill in the blanks that journalists, particularly photographers, can’t access. Francis Ford Coppola’s The Godfather, the monumental three-part film series chronicling the rise of the Italian mafia in America, relies heavily on the use of graphic scenes to express the ruthlessness of organized crime and the world its characters inhabit. (The first Godfather also highlights the threat photography can pose to underworld figures in exposing their identity. In the film’s early opening scene at a wedding, a crime boss in attendance has a photographer’s camera taken away and its film destroyed for taking his picture, a statement about the power to control what can and can’t be photographed. Actor James Caan repeats the destruction of a camera one scene later.) Additional notable films dealing with organized crime include Brian DePalma’s Scarface and Martin Scorcese’s Goodfellas.

However, as remarkable as these films are, and as much as they’re based on research and on some true events, these films stop short of a full moral indictment of their murderous protagonists, who typically retain a roguish charm. Many of the characters in these films are admired in pop culture. This is an enduring phenomenon with dramas on the screen, seen most recently in the case of the hit TV show Breaking Bad, which depicts a high school teacher and former student who produce drugs. Evil as they are, these drug producers are admired by many viewers. In short, many of these shows and movies, despite their good-faith approach to context, are morally misleading, prompting us to sympathize with their villainous heroes. Only one exception, Gomorrah, an Italian film based on writer/journalist Roberto Saviano’s book on the Neapolitan mafia, the Camorra, comes to mind. The film contains no one likeable actor to glamorize or identify with. Its narrative is a constant disturbing journey into darkness. It is that rare creation that combines the best of cinema and photography into one.

Which brings me back to Mexico. With some murders, Mexican-based criminal groups want media coverage in order to spread their message of power and intimidation. Some Mexican criminals even film their activities, which include executions, and post them online. There’s almost always some interested party when an image is released or published. Sometimes, it’s a cartel communicating through the media that its assassins are killing off enemies in another cartel; sometimes it’s the Mexican government that wants it known that it has killed or arrested a cartel leader. The shocking imagery becomes about letting everyone, including the media, know who is in control. Add to this a body count has remained so high for so long—some 60,000 and counting—that many journalists I know have had a hard time making sense of why they keep photographing, and publishing (sometimes at their own peril), all those horrifying images.

When I work I try to build a narrative and connect people to something important. Some of the questions I always challenge myself on are: Does my use of an aesthetic such as focus, light, composition, and color help to increase understanding of what I am covering? Does it promote dialogue? I also attach a detailed caption or longer piece of writing to my photographs to explain who, what, where, and why. I never photograph a body or tragedy and publish it for the sake of mere shock. If a photograph is startling, it must be for a purpose.

With every photograph, I ask questions and investigate why something has happened. Many of my colleagues and I also follow industry-accepted ethical standards—such as not setting up a photograph or interfering with the events (excepting some humanitarian instances) so that we are as neutral a witness to the situation as possible. I believe that when photojournalists cover a story, it is our moral obligation to provide context, to document what is in the public’s interest, and to record an issue or event for history.

This isn’t the only reason to keep using photographs in an age of the moving picture and smartphone videos. Another is that there seems to be no substitute for the moment, frozen, that still photography can convey. There is film footage of a summary execution of a captured Vietcong guerilla in 1968, but few people have ever seen it. What continues to haunt us instead is Eddie Adams’ photograph of the moment the bullet has been fired into the prisoner’s head as his face grimaces.

The camera is a powerful tool, and everyone has one in hand these days but doesn’t necessarily know how to use it effectively or ethically in situations that involve tragedy. Sadly, as we saw with a recent New York Post photo of a man who had been pushed onto the New York City subway tracks, many photographers and journalists fail to ask ourselves about the purpose, context, and reason for taking and, more importantly, publishing certain photographs. We must always remember the difference between using the medium to inform and abusing it solely to shock. 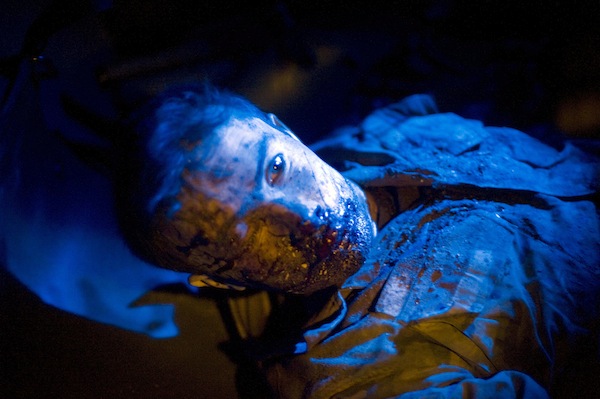