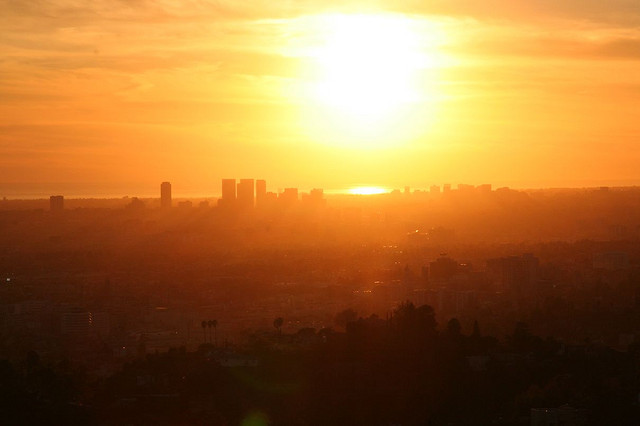 Traffic remains heavy on the westbound and eastbound 10, 15, 20, and 25 freeways. And now it’s over to the Southland weather report with Dallas Raines the Fourth.

Thank you, Chip. Normally, I do weather forecasts. But today, as we approach our first day of spring in the year 2100, I’d like to pause and do a weather look-back. I know that nobody wants to hear pining for the old days, but after this winter of heavy rains and devastating floods throughout the Los Angeles basin, I cannot resist. So let me tell the story of how our local climate has changed since the late 20th century, when my great-grandfather Dallas Raines first launched his meteorological dynasty.

I cannot complain about the cold. We have not had freezing temperatures. Those are of the past, except in the highest elevations of the Sierra Nevada. But the summer heat last year was extreme.  Days with 95 degrees Fahrenheit temperatures were considered extremely hot in the 20th century, but of course we now take those for granted. We had 70 such days last summer. And we set a new record: several days with 120 F in the San Fernando and San Gabriel Valleys, where even the nights were reaching 80 F. Even Santa Monica saw some 110 F days.  It’s good they built a roof over the AEG (formerly 3rd Street) Promenade.

My great-grandfather loved the chaparral vegetation of the foothills, but that has long since thinned. Only the hardiest shrubs are left, and that’s if they haven’t burned. This year’s fires were some of the worst yet, and now fire seasons regularly last into November. Santa Ana winds are rarer than they used to be, but they’re drier and hotter, by as much as 10 F. Remember last fall’s fire? The one that covered the slopes of the San Gabriel and San Bernardino Mountains from Santa Clarita to San Bernardino? Fire suppression in the foothills had been successful for decades; arsonists were kept in check. But when the Santa Ana winds kicked up, the hills exploded. Pyrocumulus clouds towered in the evening skies for weeks. With their reddish gray glow and bright white tops, they looked beautiful from a distance, if it hadn’t been for the ash raining down on us and the smog forcing our kids to remain indoors.

So much for fire. Water’s a problem, too. The rainy season used to be a lot longer. Now it starts late in October, and the last rain falls in April, because of a poleward shift of the jet stream. From May through October, as you know, it’s scorching. Meanwhile, when it rains, it pours. The intensity of a 10-year flood has increased by 50 percent since the old days. The air bringing the precipitation carries more moisture, and little of it now falls as snow in the mountains. Almost all of it falls as rain that runs off the hills immediately, leading to landslides and flooding that have wiped away the upper reaches of those long-gone foothill communities with evocative names: La Cañada, Topanga, Sierra Madre.

As you might expect, we’ve got another water shortage on the way this summer. The City of Los Angeles has kept up its desalination efforts, but it’s not enough. The April snowpack in the Sierra Nevada has been on average only a fifth of what it was 100 years ago. Believe it or not, Angelenos used to have big green lawns that they’d water. Orange trees, too.

This winter was especially hard. Remember when we got hit by Atmospheric River Kobe a few months back? Believe it or not, a hundred years ago, no one knew about atmospheric rivers, the narrow bands of moist air that blast western coastal regions with moisture from the tropics. The Weather Channel didn’t even have names for them. Today we all know that the “pineapple express” from Hawaii brings no sweet fruits but downpours. This year, three atmospheric rivers hit the Southland within two weeks, causing flooding in Long Beach and Ventura and debris flows that destroyed thousands of homes in Malibu and Thousand Oaks. At its peak, the Los Angeles, San Gabriel, and Santa Ana rivers merged, covering an area from East Long Beach to Huntington Beach, which may eventually lose the struggle to maintain its waterfront against the gradually rising sea level. Millions of people were evacuated from hillside communities as the hillslopes, weakened by fire and saturated with water from the first rains, gave way under the torrential downpours.

At least Northern California fared a bit better. Flooding still led to hundreds of deaths and trillions of dollars in property damage, but the lack of snow that can melt quickly prevented the weather from reaching the destructive power of the storm of 1862, when a heavy snow year, combined with a series of atmospheric rivers, turned the Central Valley into a lake 300 miles long. We’re not seeing a lot of years like that, to say the least.

I know we’re proud of California’s unmatched corn and tomato farms.  But there are still some Californians old enough to remember when the Central Valley was a fruit basket, home of nut and fruit orchards. Of course, the almond, walnut, orange, peach, and tangerine orchards covering the Valley in the 20th century depended on irrigation, but the snowpack dwindled. Clever agribusinesses first tried to cope by capturing runoff from winter rains and pumping it underground into depleted aquifers to store the water for summer irrigation. But eventually, less and less precipitation took the form of mountain snow that was released gradually as meltwater in spring; intense winter storms caused equally intense runoff that could not be fully captured. Fruit and nut trees had to be removed, and the corn and tomatoes we planted had to be genetically modified to allow them to cope with frequent droughts. Today, we’re even growing millet and sorghum, crops that used to be limited to dry regions of Africa, South Asia, and Mesoamerica, regions that are now mostly devoid of agriculture. Eastern Washington and Western Canada are where we get our fruits and nuts these days.

With the decline of agriculture, the rise of flooding and landslides, and the excessive summer heat inland, Southern California’s face has changed. The coastal areas remain attractive, the entertainment industry continues to stream to our virtual reality glasses, and the surfing is still good. The air is much better than our ancestors could have even dreamed, since California took the lead in developing a solar-powered infrastructure that virtually eliminated local emissions (and Asia eventually followed).  But I can’t get very excited about touring the abandoned towns inland. People tell me I should enjoy the new forms of landscape art that have sprung up—illustrating the majestic forces of floods and erosion through ephemeral structures erected on the hillslopes, only to be washed away in winter storms—but I’m old-fashioned.

Overall, I’m not complaining. California is faring relatively well, especially when you look at island countries and poorer countries, threatened by the slowly rising sea level. And although the world’s population has stabilized and emissions of carbon dioxide and other greenhouse gases that caused these changes are now lower than they were in the 20th century, their crazy weather effects, it is now clear, will continue to be felt for centuries.  So we meteorologists have plenty of job security.

While the year is 2013 and this is clearly science fiction, it is plausible fiction based on the science of climate and the climate change trajectory we are on.

Resources: A great resource for interactively exploring climate change scenarios for California is http://cal-adapt.org. The Los Angeles Regional Collaborative for Climate Action and Sustainability provides information on how climate change may affect Southern California (with focus on the mid-21st century) at http://c-change.la.